The #SCM16 Keynote talk was delivered by endocrine surgeon, author, and personal hero of mine, Atul Gawande. His talk mostly took anecdotes from his book, Being Mortal. (See a  discussion and review of the book at NephJC.) 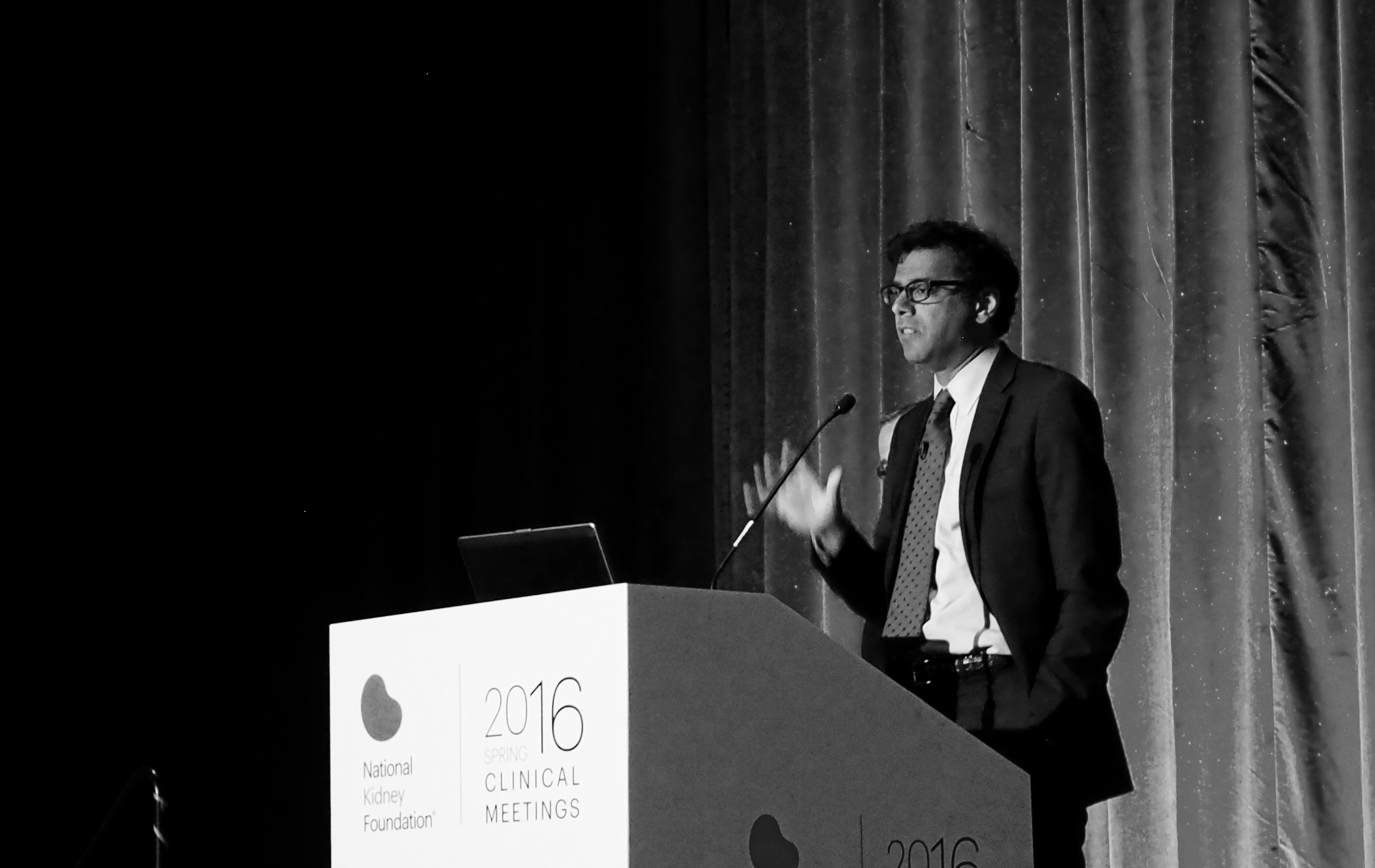 Before getting into the specifics of Dr. Gawande’s talk, I want to describe his manner on stage. He is supremely confident and gave two-thirds of the talk with no slides. He also did not hide behind the lectern but walked casually to both sides of the stage as he talked about his journey of understanding.

Dr. Gawande started by describing how he came to realize how ill equipped medical school had left him to handle end-of-life discussions. He learned a lot of things in medical school but little about mortality. Medicine is asked to fix the unfixable, and at such times, one needs to have pointed discussion on the desires and needs of the patients. Not only did Dr. Gawande not know how to do this, he didn’t even know what doing a good job and being excellent at this would look like. To frame this, he described an elderly woman who comes to the hospital with severe, life-threatening burns. The surgical team talks to the family of the woman who is now comatose and being resuscitated. The surgeons explain that without treatment she will die and with treatment she will have a long and painful road to recovery.

A framing of chronic illness with 100% mortality that doesn't quite work.@Atul_Gawande #scm16

The family can’t stomach doing nothing so the resuscitation continues. She is given pressors, multiple surgeries, and dialysis and pulls through, but she has a tracheostomy, remains dialysis dependent, has chronic pain, and cannot speak. The family says she would have never want to live like this and they enter hospice. She passes a few days or weeks later.

A lot of pain. A lot of misery. No value.

Dr. Gawande points to that initial meeting with the family as the point where a real disservice was done. How could he have done a better job at framing the discussion – at providing prognostic information and telling the family what to expect so that this long drawn out death and misery could be curtailed? He put away his stethoscope, put on his writer’s badge, and went out to learn. This ended up being a multi-year journey that included the death of his father.

Before 1945, most people died in their homes. Hospitals had little to offer. By 1990, however, 85% of people died in institutions, mostly in hospitals and nursing homes. This was because there was a revolution in medicine ,and we came up with thousands of drugs and procedures to treat the over 60,000 medical conditions that we have been able to map in ICD-10.

The Medicalization of mortality.

We medicalized mortality despite being unable to ultimately stop it. This means that the week of your life you are most likely to get surgery is the last week of your life. Nine percent of all people have surgery in the week before they die. This is valueless surgery. No one can recover enough from the surgery to enjoy any of the purported benefits that procedure entails.

He contrasted this with some other aspects of our mortality. As we age, we become less prone to anxiety, depression, and lovelessness. As we become more aware of our fragility, either through aging or chronic illness (for this, he used the experience of patients with AIDS early in the epidemic) our priorities change. We become more focused on friends, family and personal comfort and less concerned about longevity. (Of note, this also surfaced in Dr. Berns’ talk.)

He talked about nursing homes and how they suppress resident independence in favor of safety and longevity. You enter a nursing home ,and its very design is based on a hospital. Activity revolves around the nursing station rather than a living room or the kitchen that you would see in a typical home. People that enter a nursing home lose their furniture, their autonomy – they even get assigned a roommate.

nursing homes gives you a roommate. He says they have more in common with jails than homes. #scm16

Gawande told a story about a nursing home resident who was repeatedly caught stealing cookies. The staff kept trying to stop her. They reported her. They tried to punish her. They called her family, and the family just said, “Give her the damn cookies.”

First applause line, "Give her the damn cookies" #scm16

Dr. Gawande said that after his multi-year investigation into end-of-life discussions, his realization was simple and almost embarrassingly banal: people have priorities and goals in life besides just living longer.

It is critical to determine the goals of people and the best way to do this is simple: ask  them. Dr. Gawande explained that he has a colleague whose father was dying and during discussions it emerged that the father would do anything it took as long as on the other side of the intervention he could eat chocolate ice cream and watch football. This was so practical that it made determining treatment decisions easy. Gawande uses that story when he talks with patients now. He even used it with his own mother. He just recounted the story and asked, “What is your chocolate ice cream and football?”

The last part of the talk was a more traditional medical talk. The slides came back up, and Dr. Gawande began sharing data from a randomized controlled trial he is doing with his lab. He described Temel’s discovery that palliative care actually lengthens not shortens life:

He then began investigating what the checklist should be for getting palliative care results from one’s primary care doctor. He says the first step is to have the physician shut up and listen. The doctor should ask about patient’s goals, fears, what they want to know about their prognosis, and what are they willing to do to get more time. If, in this conversation, the doctor is speaking more than 50% of the time, s/he is doing it wrong. You need to be a counselor not Dr. Informative.

Dr. Gawande explained that he is doing a cluster randomized controlled trial where they train doctors to be better at end-of-life discussion. The intervention has already been shown to be successful at producing more, earlier, and better conversations. Too often the end-of-life conversation is just about code status. They are also seeing longer life just like Temel did.

It should be great to see this data when it gets published.

After the talk, I asked Gawande about some of the recent negative trials of checklists. He said most of those had inadequate implementation of the checklists. He pointed to an Italian study that showed improved outcomes from checklists along with the Scottish experience (and this study by van Klei), all while heading to his next talk.

It was not easy but I did get the @Atul_Gawande selfie #SCM16 pic.twitter.com/L0YMPGLdyj