Nothing seems to work to keep dialysis patients alive longer. Blockbusters like statins and ACE inhibitors have failed in multiple randomized trials in the dialysis population, and even dialysis specific interventions, such as high flux filters or increasing adequacy, have disappointed. Could it be that the epidemiology of death is different in dialysis? Indeed, a smaller proportion of death can be attributed to acute plaque rupture than to sudden cardiac death. As data from national registries show, sudden death is the cause of death from 18% (in Canada) all the way to 33 % (in US) in dialysis patients. But could all this sudden death truly be cardiac in nature, given that registry data may not be all that accurate, and that autopsies are rarely done? To belabor this point, the only autopsy study (93 patients from Japan) reported stroke as being a more common cause of sudden death, and only 1 in 5 of sudden deaths were cardiac in nature. On the other hand, in randomized trials with meticulous adjudication (examples include HEMO, 4D and EVOLVE), about 1 in 4 deaths have truly been confirmed to be sudden cardiac death. In this timely AJKD review, Makar and Pun walk through the epidemiology of sudden cardiac death and discuss various possible management strategies. 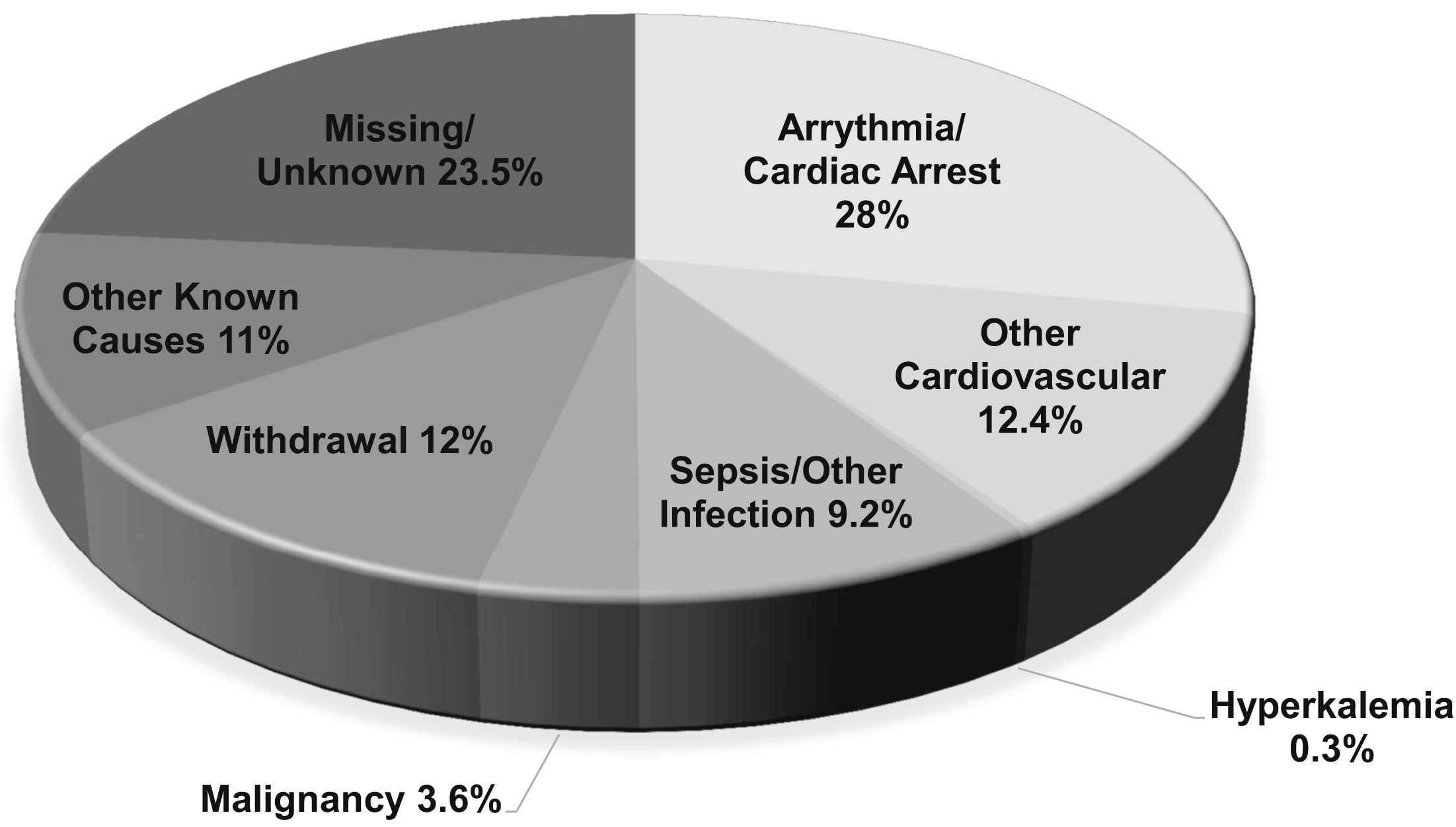 How do we explain the higher risk of sudden cardiac death in the dialysis population? The usual suspects for coronary disease (eg obesity, cholesterol) do not explain the complete picture, with a greater role instead for myocardial fibrosis, and dialysis-related repetitive myocardial injury. Arrhythmogenic triggers could be notably related to the electrolyte flux, with a greater mortality rate observed with low potassium and calcium baths (see a couple of #DreamRCT ideas discussing ways to tackle this). Most concerning is that little is known about the terminal arrhythmia leading to sudden cardiac death. Ventricular tachyarrhythmias would respond to traditional defibrillation; however, asystole and bradycardia would not. Data from small observational studies unfortunately report that it is the latter feature that predominates in hemodialysis patients, which does imply simple device implantations will not have a huge impact. Needless to say, devices have other adverse effects, being associated with greater complications (bleed, infection), creating access problems, and with underwhelming efficacy data.

In the face of all this data, are medical or dialysis interventions the key? Perhaps – the only positive, albeit small sample-size trials, in hemodialysis populations used a beta-blocker intervention. Minimizing potassium shift is easier said than done – the availability of potassium modeling would be a nice tool to have. Inattention to pre-dialysis potassium levels and dialysis against bath potassium <2 mEq/L are potential risk factors for SCD. And though higher calcium baths may seem desirable (since lower calcium bath is associated with mortality), this could very well lead to vascular calcifications and problems of another nature. Two promising interventions that could reduce left ventricular damage associated with recurrent episodes of dialysis induced hypotension are to limit ultrafiltration rate (eg to < 10-13 ml/kg/hour) and lowering dialysate temperature. Limiting rapid ultrafiltration could also be problematic, if not accompanied by lower interdialytic weight gains, and/or longer or more frequent dialysis (see blog coverage of the issue). Similarly, for dialysate cooling, there is only data on surrogates so far, and a larger trial is ongoing.

In summary, what are our options to prevent or at least reduce the risk of sudden cardiac death in the dialysis population? There are definitely no simple fixes. Promising options include subcutaneous implantable defibrillators, which would avoid the high complication rates seen with traditional devices. There are also ongoing trials, such as the WED-HED trial and the MY-TEMP trial, which will provide some much needed evidence to guide clinical practice.