Every March since 2013, the AJKD blog transforms into the central headquarters for an evidence based, non-commercial, medical education experiment in leveraging the tools of social media, interactivity, and gamification to teach the latest advances and the most important breakthroughs in nephrology. We call this madness, NephMadness, as an homage to the NCAA Basketball National Championship Tournament, colloquially called March Madness.

Playing and learning from NephMadness happens in three steps.

Starting on March 26th, you will get an e-mail every 2 to 3 days telling you how your picks are doing. Top scores win prizes.

Here is a helpful infographic to get you started: 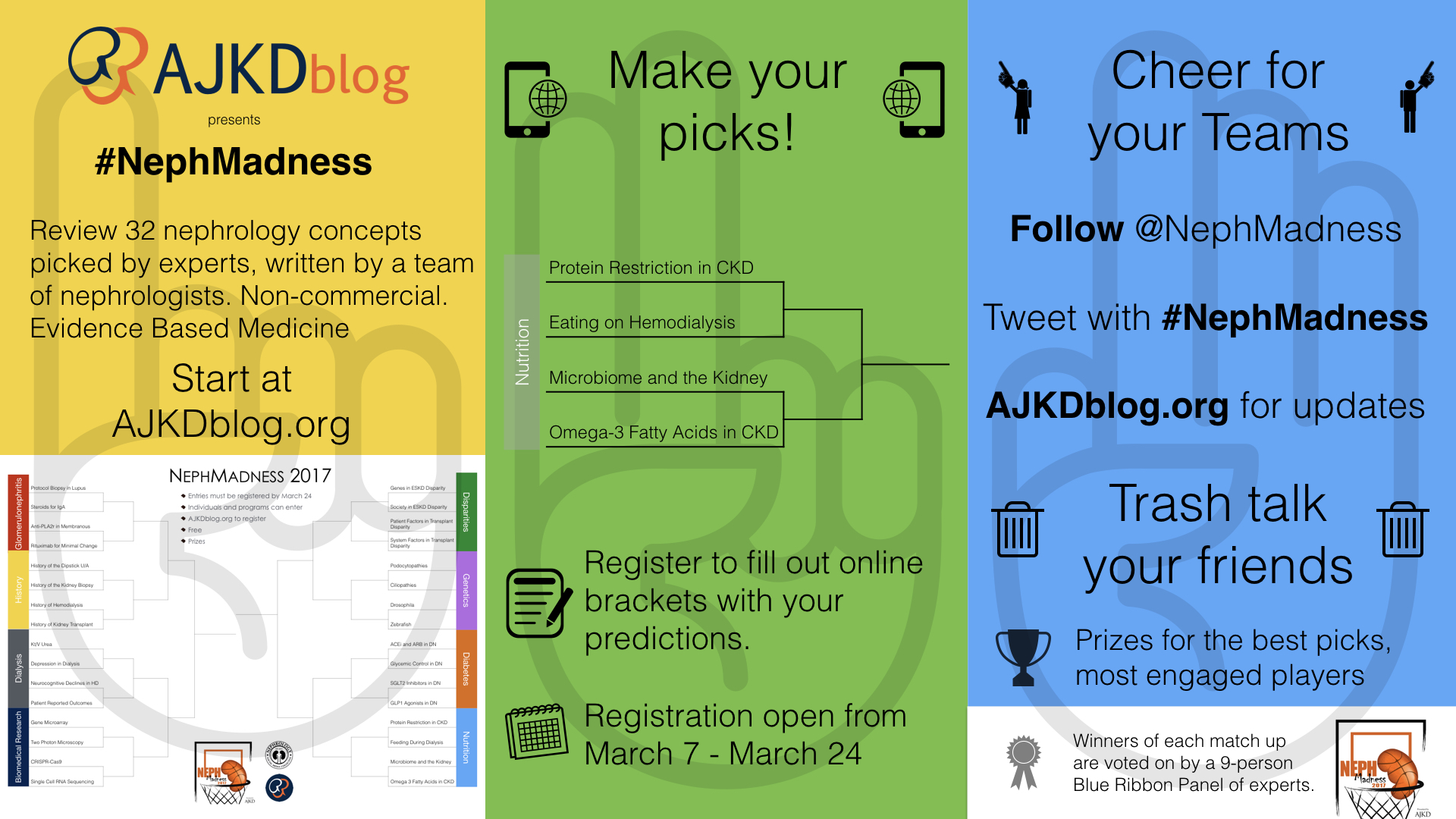 OR watch this short video:

The tournament has 32 nephrology concepts divided across 8 different topic areas, called regions. Each region has 4 concepts which compete against each other in a single elimination tournament. We have selected content experts from each topic to help us determine the best concepts and vet the information we provide to make sure it is accurate, unbiased, and interesting. The selection committee includes:

The field for NephMadness 2017: 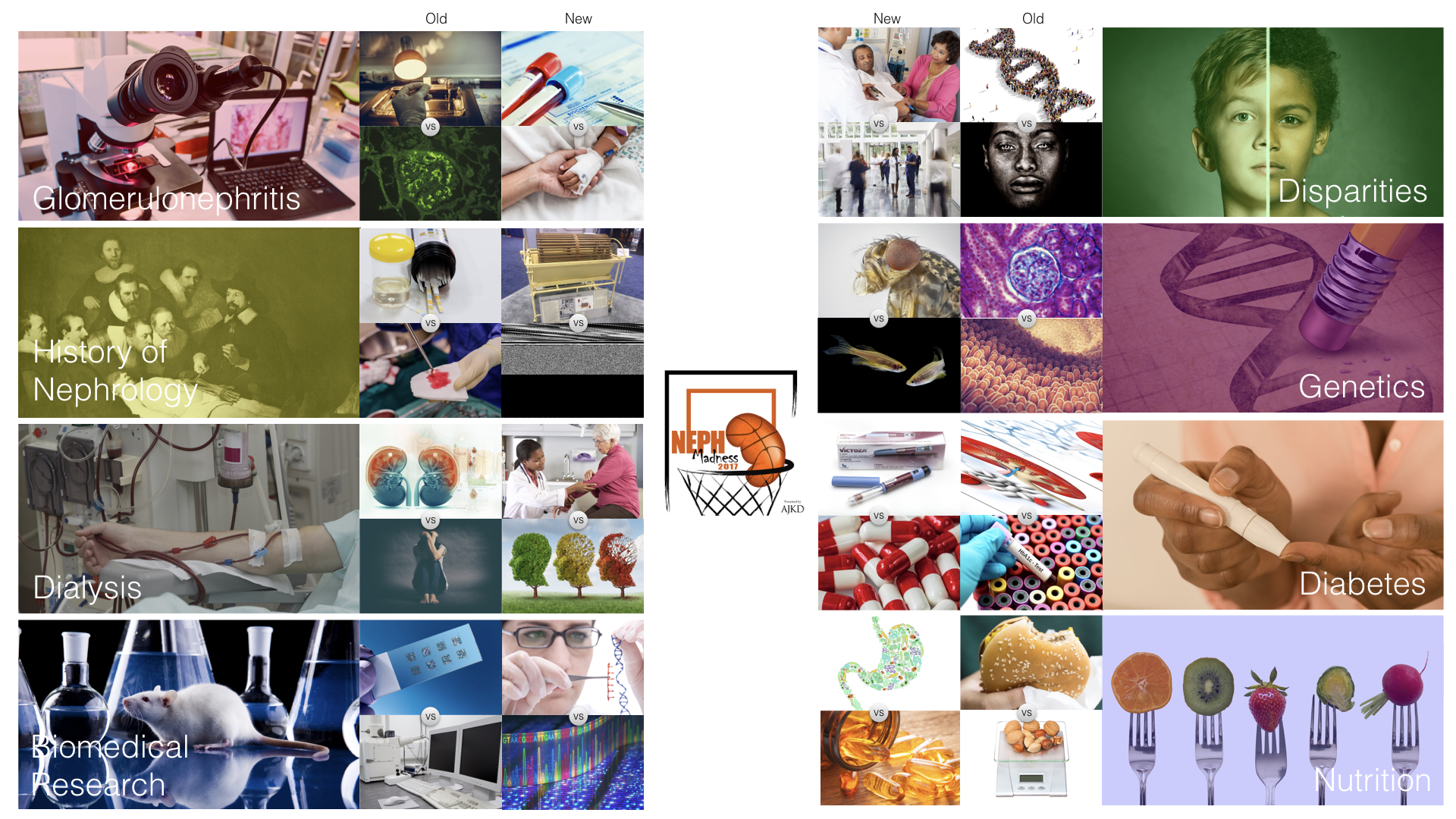 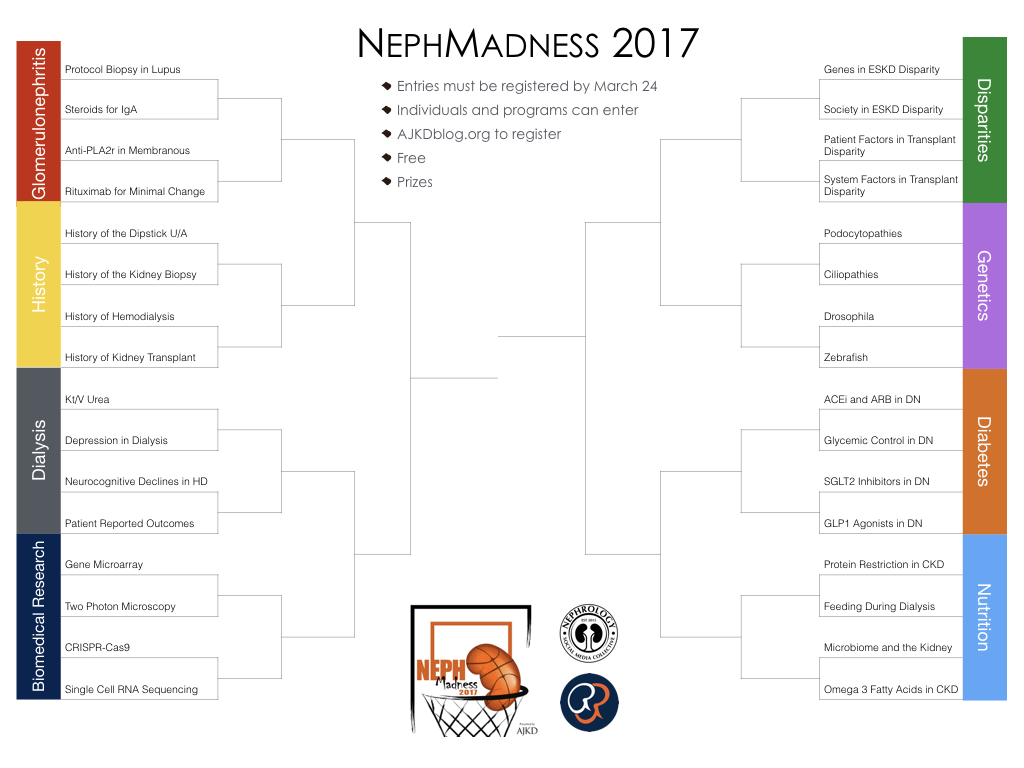 A Blue Ribbon Panel will determine the winners of each matchup by the Friday, March 24, 2017 (11:59pm EDT) deadline for entering the contest. All seven members of the Blue Ribbon Panel from 2015 and 2016 are returning and in addition we have added two new members (denoted N). Introducing this year’s NephMadness Blue Ribbon Panel:

You might ask, how can I decide a winner between Drosophila and Zebrafish? Don’t get too caught up in the impossibility and just read up on both teams and make a call. The aim of the game is to learn. If you disagree with “winners” please tweet (#NephMadness) or blog about it. This is social media, outrage is our oxygen.

Prize Update: In addition to the above categories we will be awarding a Group Prize to the group that has the most individuals affiliated with it. To be eligible for this prize, you will be prompted during bracket submission to indicate your group (for example, your affiliation with a particular Fellowship Program/Residency Program/Group Practice/Medical School etc). Please note we will only accept one group affiliation per entry. We hope to encourage a little friendly competition between rival programs, so make sure to get as many people from your program to participate in NephMadness 2017!

Follow the AJKD NephMadness Team (listed below) on Twitter, engage away, and get a head start on claiming the Best Tweeter prize!

Updated March 7th to include NephMadness 2017 information such as regions and brackets.