The first round results from NephMadness are in. Who’s up? Who’s down? Who’s out? What was your bracket buster? Where did the Blue Ribbon Panel go wrong? Tweet your reaction with hashtag: #Saturated16 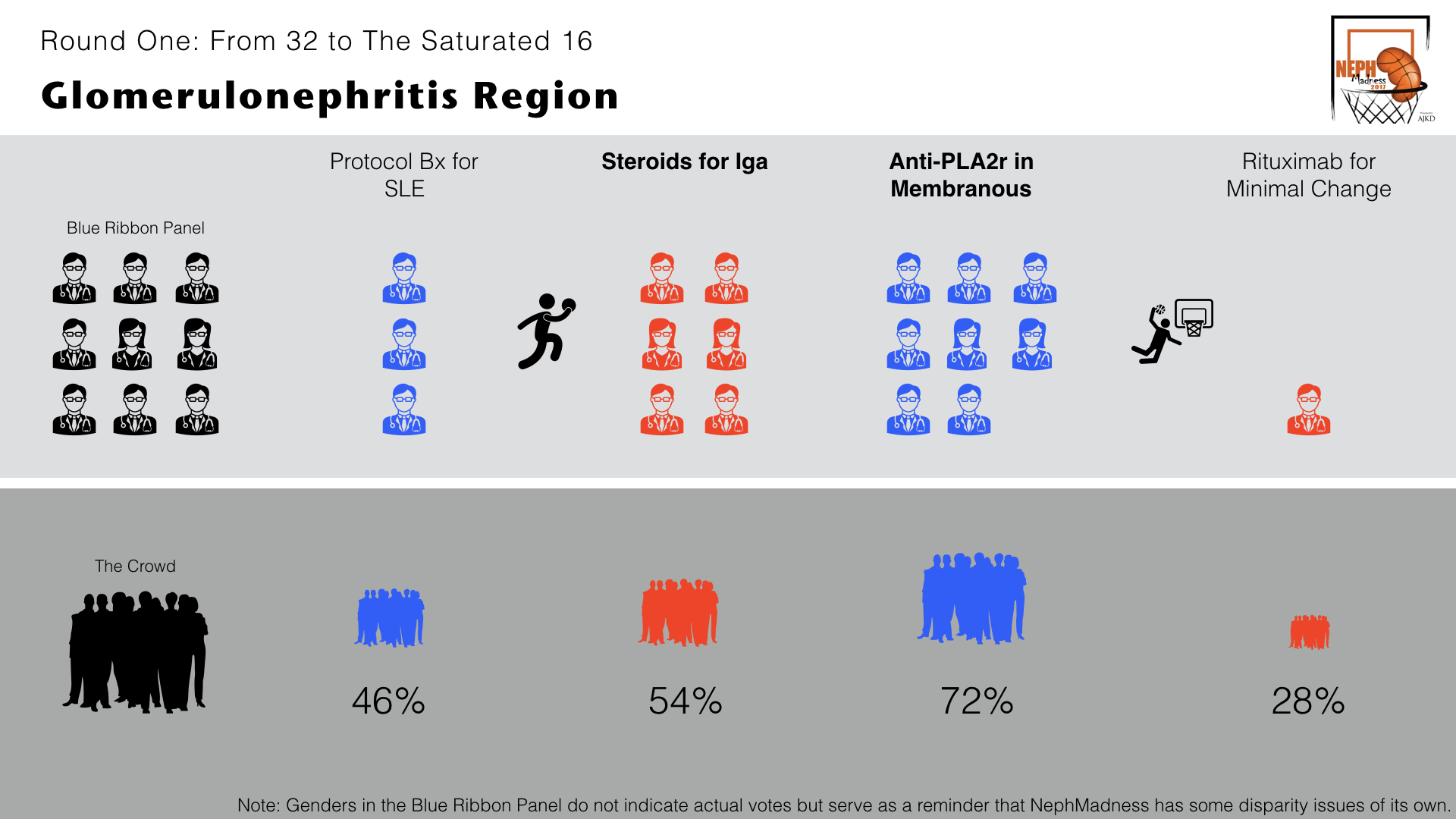 Right out of the gate Steroids for IgA took an early lead against Protocol Biopsy for Lupus and despite a furious finish and a withering full court press, Protocol Biopsy couldn’t close the gap.

Not sure either of these teams have the resources to run with the field.

Anti-PLA2r with its first appearance in the tournament since 2013 looked well rested and ready to take on the world. Rituximab for minimal change disease looked like a 16 seed and fell without much resistance. Look for Anti-PLA2r to go far.

This one is easy. Here’s a molecule that will have far-reaching consequences in understanding pathophysiology of a relatively common glomerular disease. Rituximab on the other hand seems like another non-specific therapy for minimal change disease, although one that reveals the significance of B cells to the pathophysiology.

Anti-PLA2r is the dynasty, but they are getting old. I think they may have 1 more run left in them. 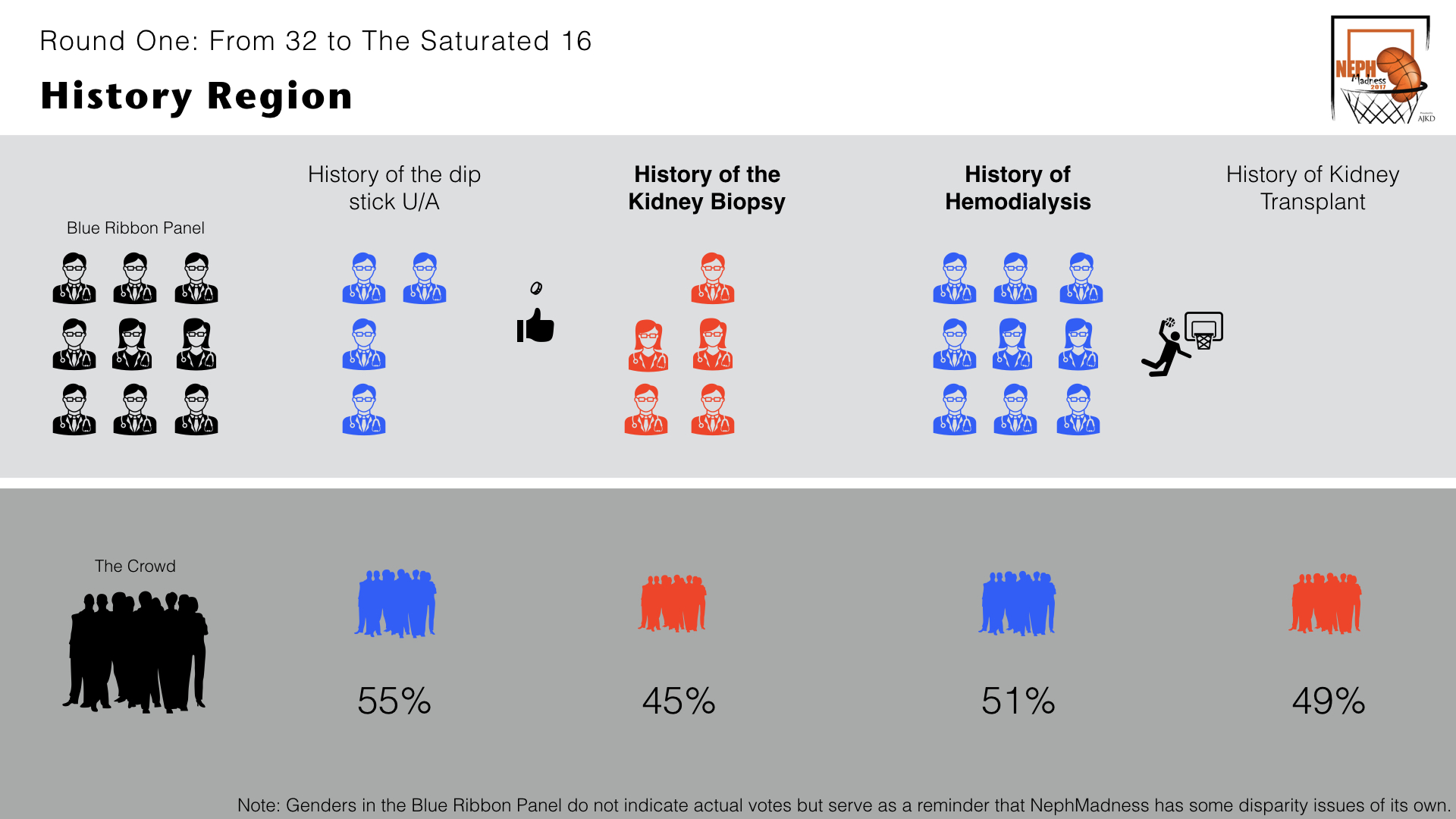 History of the Dipstick looked sharp for the first half but a quick jab with a 16 gauge biopsy needle let the air out of their tires and History of the Kidney Biopsy clipped them at the end.

The dipstick is under the radar no longer. Uncelebrated and taken for granted, like the back-door cut in the Princeton offense, but incredibly effective and maybe, just maybe, efficient enough to knock off a big guy.

Did the dipstick advance the field more than microscopy which dates to the 17th century? Or beyond tasting the urine which dates back a couple millennia? The kidney biopsy changed everything.

Tough one – both teams have shaped the game.

We have come a long way from sausage casings and clamps. Not far enough though. While most people would prefer a kidney transplant, the sheer number of people who have been treated with hemodialysis makes this a force to be reckoned with.

No nephrologist should get through their training without knowing this story.
This is a hard one. Hemodialysis had a more immediate effect on saving hundreds of thousands of lives. I might vote differently in 100 years.
Beating the drum – dialysis has saved more lives than anything else nephrology. 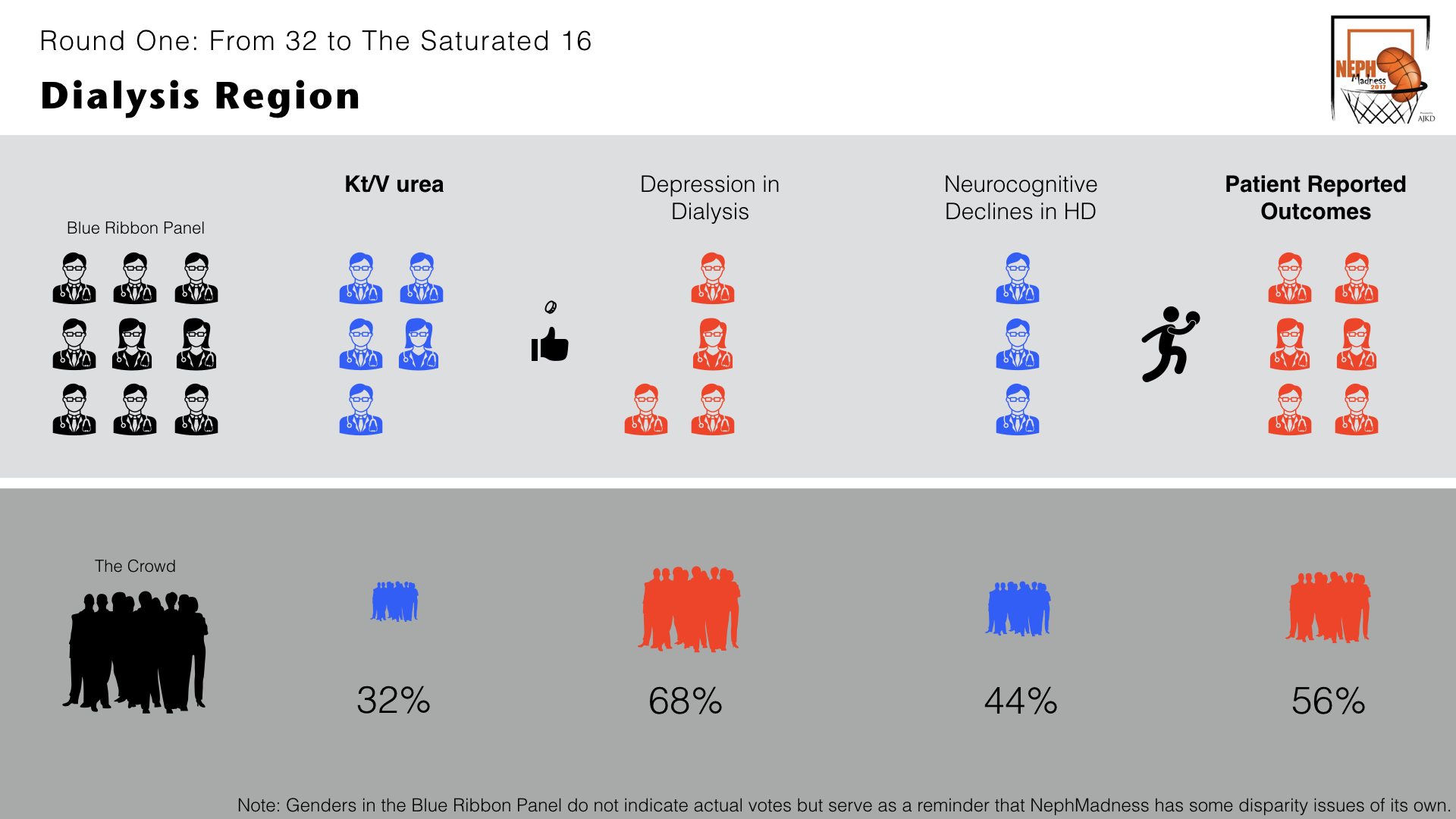 Depression in Dialysis came in with a lot of momentum but Kt/V urea is like a zombie and couldn’t be killed despite RCT after RCT.

Measurement of dialysis dose and the beginnings of judging adequacy was a worthy goal.

Depression in dialysis doesn’t seem to be old or new or something we have really addressed; it’s always been present.

Depression is the sleeper in this Division.

Neurocognitive declines in HD is a team that has lived by its 3-point shooters all season. But like any team that depends on the three, if they go cold there is no way to win and today, Patient-Reported Outcomes was the beneficiary of those shots not falling.

How often when talking to a dialysis patient do you feel that what you are saying is going in one ear and out the other? Almost like trying to coach Demarcus Cousins…
SONG initiative is really innovative and as far as I know a unique approach and a crucial one to chronic illness
How can patient reported outcomes be meaningful in the patient with cognitive decline? This one ends when neurocognitive declines starts shooting at the wrong net. 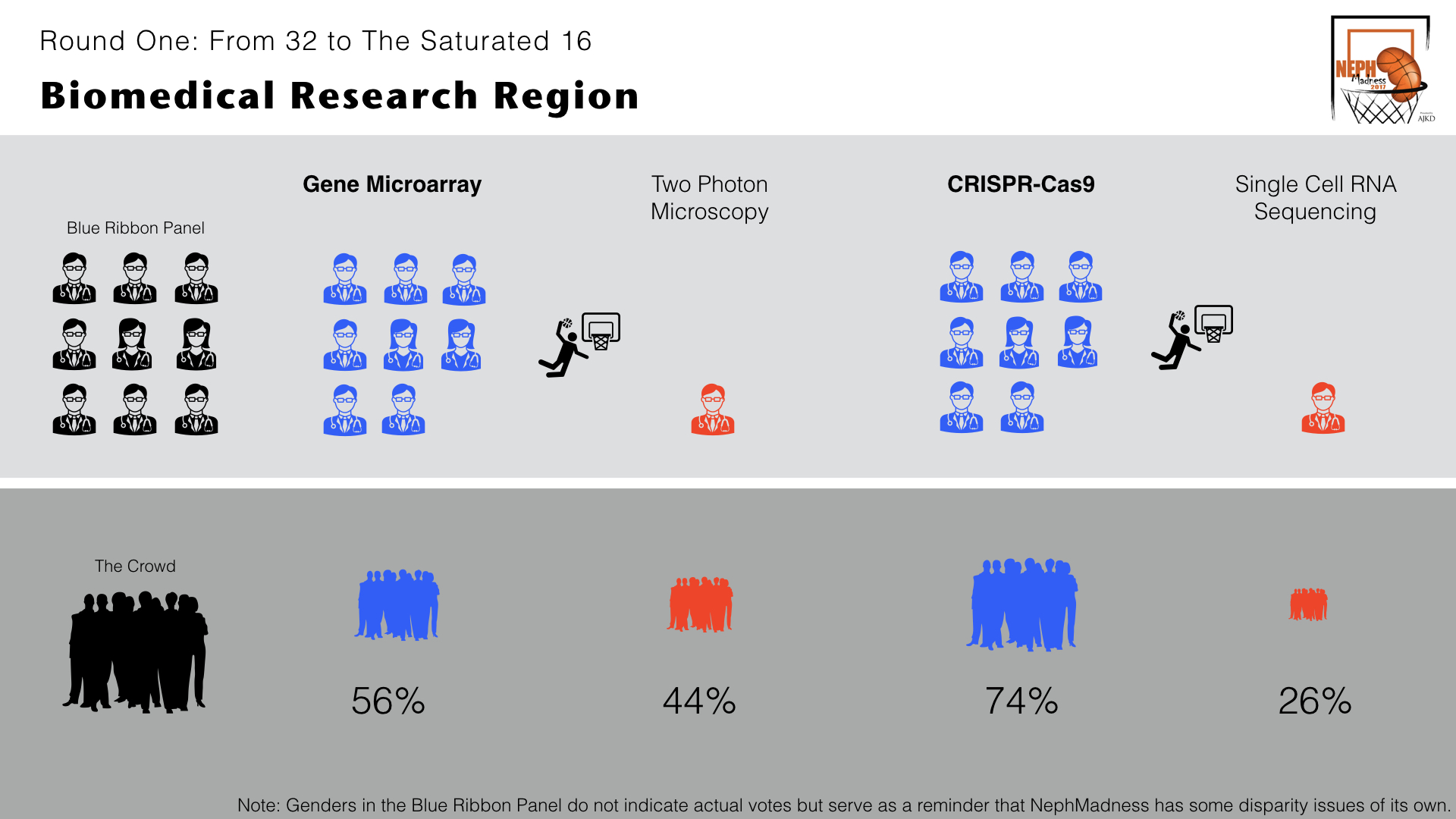 Gene Microarray has a pair of all-conference 7-footers that have been dominating the boards all season. Two-Photon Microscopy’s only chance was to play tight man-to-man defense and hope for turn-overs and a quick paced game. This strategy failed as Gene Microarray showed good ball control and an ability to control the tempo.

Both of these coming under the heading of “old” have not really reached their potential. Anything with “gene” in it deserves a vote.
We can’t even imagine Gene Microarray’s potential.

It has been a long time since a team came into the tournament riding as much hype as CRISPR-Cas9. Some thought the pressure would get to the rookies, but CRISPR showed poise and destroyed Single Cell RNA Sequencing in a game reminiscent of the Globetrotters versus the Washington Generals.

Game changing technology
CRISPR-Cas9 is the REALLY scary choice here. The potential, good and bad, is awesome.
CRISPR is running on all cylinders, and hasn’t yet begun to peak. Watch out!!! 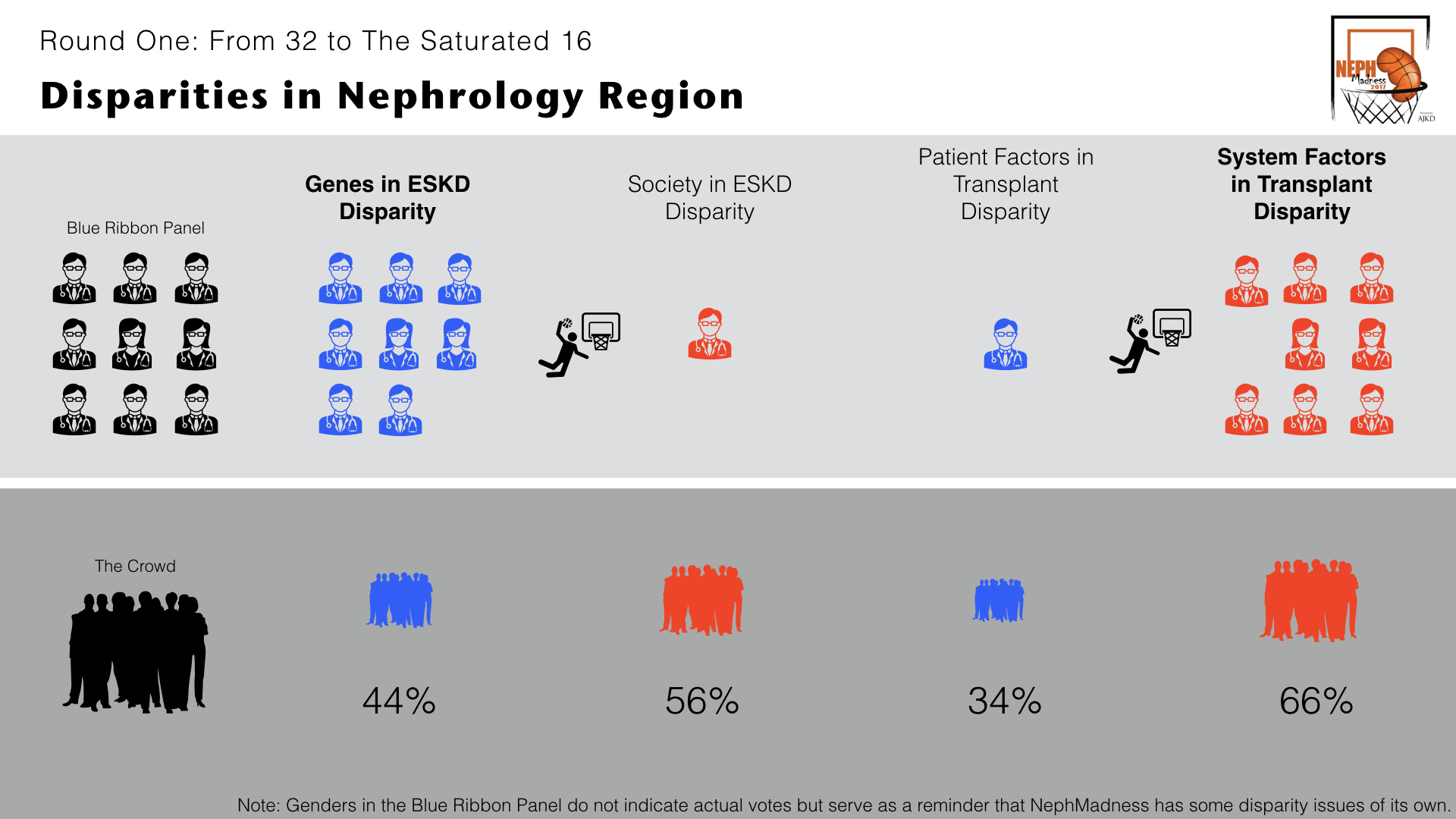 Genes in ESKD Disparity is largely just a new uniform and name change for 2015’s NephMadness winner APOL1, and the former champs played like the dominant team of 2015. They easily dispatched first round contender Society in ESKD Disparity without breaking a sweat. This is a team with a deep bench of experienced seniors. Expect Genes in ESKD to go deep this year.

We might be able to address genetic issues. Societal issues are another story
I always vote for “genes”
Tight one that could go either way, but Genes has some bench players who could be rested and ready to explode at the end.

We need to do much better and this post suggests a pathway
“Patient factors” include “genes”
System factors has the tools to contain patient factors’ weapons. 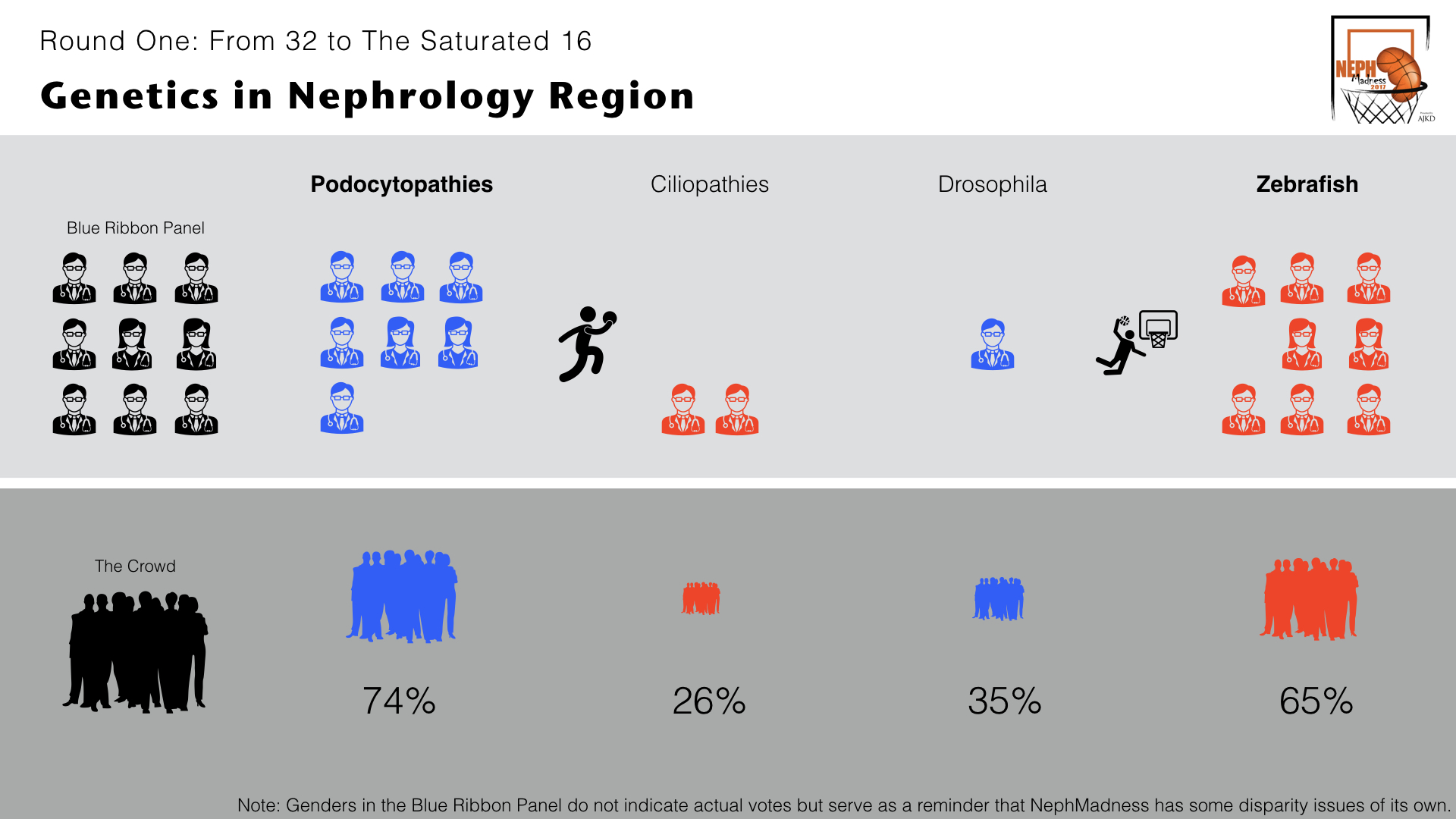 This was a match-up that had a lot of hype for possibly being the tightest match of the opening round. The game remained a back and forth toss-up until the final five minutes when Ciliopathies got casual with the ball, and gave up a few consecutive couple of turn-overs. Podocytopathies took advantage with some bombs and suddenly the close game turned into a rout.

Provocative choice. Podocytopathies must be more far-reaching though recognition of the cilium and its role in PKD is a fantastic breakthrough.
Podacytopathies had a couple big games during the stretch, but the understood pathways of ciliopathies is too deep for the upstarts.

Fish versus Flies was how the commentators hyped this match up but it turned out to be less a game and more of a steam rolling as the breakout surprise of the tournament, Zebrafish, pulled the wings off of Drosophila.
Zebrafish wins 8-1.

Great potential for the zebrafish approach
Both useful animal models with deep insights obtained.
Drosophila may have better eyes, but zebrafish have better kidneys. 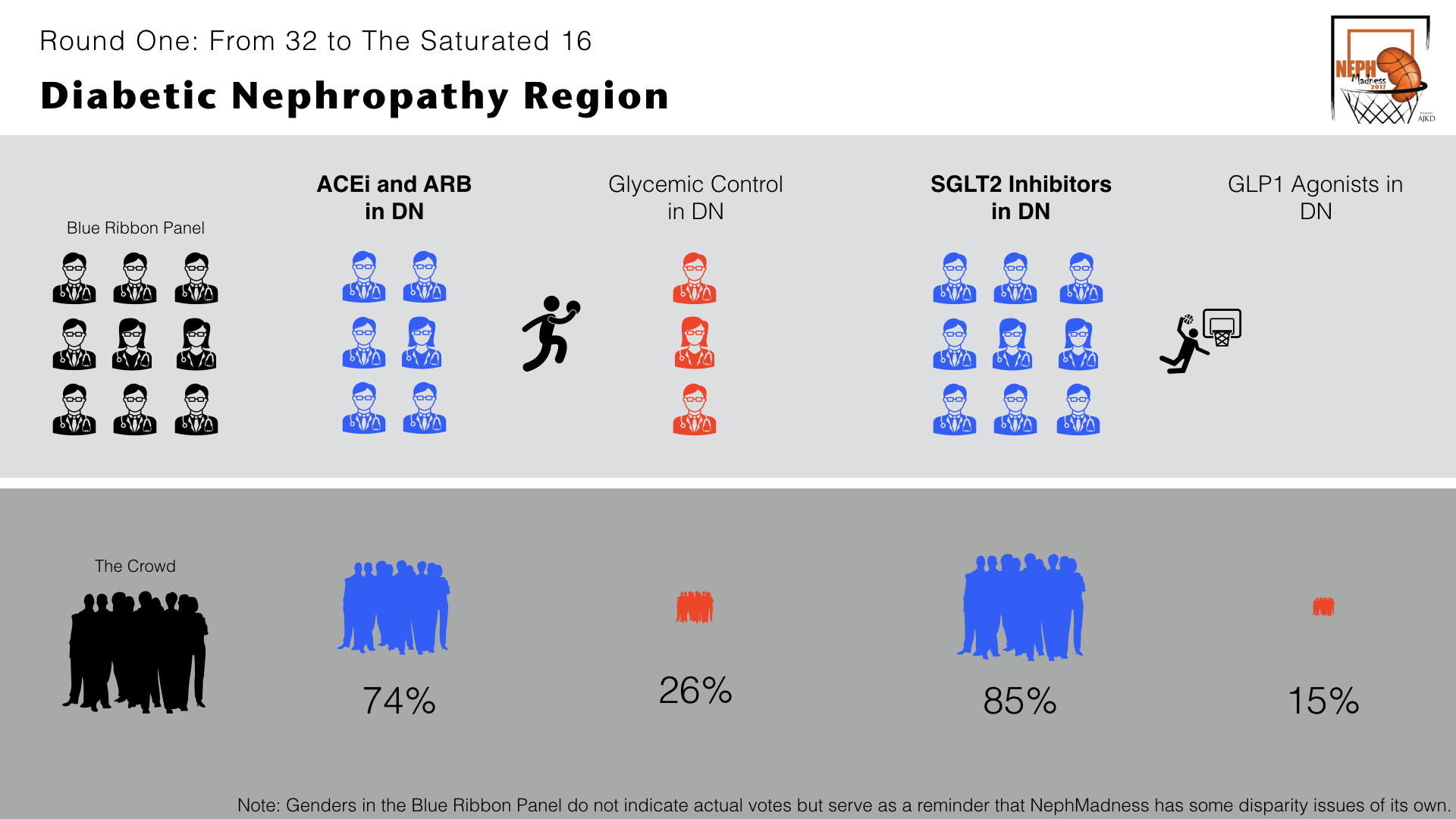 Two standards of diabetic management facing off in the first rounds. Fans were screaming for both to win and the selection committee was besieged with complaints for putting two titans up against each other in the first round, but ACEi and ARB shook off the distractions and took their well-crafted RCTs to clean Glycemic Control’s clock.

ACE and ARB in diabetes – still the greatest advance in CKD in the last 50 years. Think UCLA under John Wooden – a perpetual winner.
Perhaps the evidence that ACEi/ARBs are useful is more convincing than that for glycemic control. One has to still express some disappointment in the magnitude of their benefit.
ACEi and ARB win this this with tenacious defense.

The bottom half of the Diabetic Nephropathy Region pitted two rookies against each other. Both drugs were coming off of recent RCT wins showing they can reduce kidney events, at least as a secondary outcome. The SGLT2 Inhibitors came to play and were on fire from beyond the arc while playing a lock down zone defense. The GLP1 Agonists could never get any traction and were out of it by the end of the half.

A vote for the diaper dandies.
SGLT2 inhibitors have a uniquely rapid beneficial effect. Another game changer
Not only did SGLT2i improve glycemic control, and apparently improve both cardiovascular and renal outcomes, they provided a new rationale for understanding and teaching about tubuloglomerular feedback.
GLP1 is a young gun – needs more seasoning before they can run with the big boys. 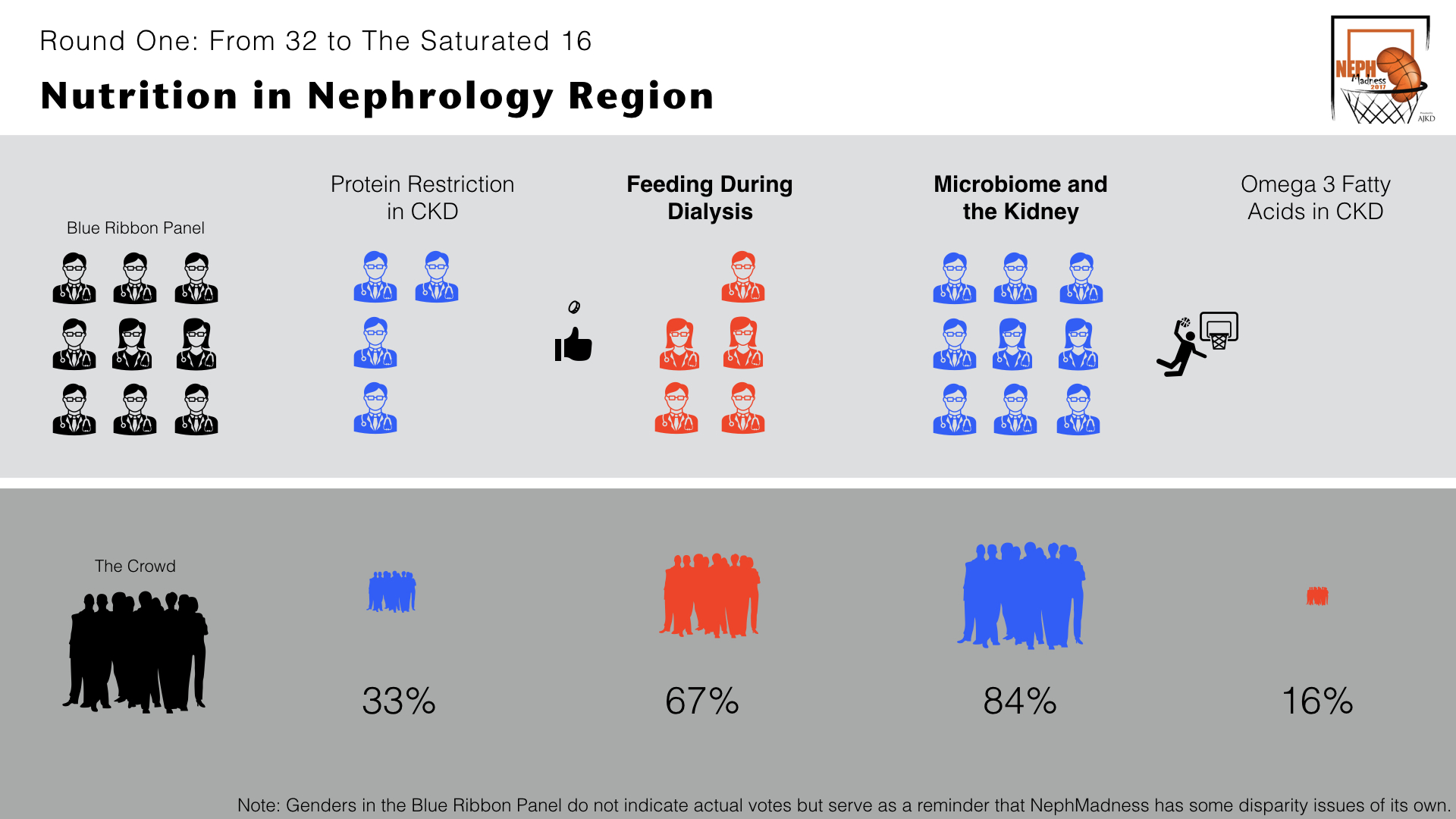 Two dominant teams with completely different philosophies. Everyone agreed the selection committee did a masterful job of pitting these two teams against each other. Protein Restriction in CKD is a defensive mastermind that has re-emerged to enter the tournament after a few decades in the wilderness. Feeding During Dialysis has an offense that wowed fans during the conference tournament. In the this classic match-up of offense versus defense, offense came out on top.

Protein restriction in CKD hearkens back to when you had 3 free throws to make 2 – it’s just so 1980s. Food is where it is at!
Feeding during dialysis is still under debate which is difficult to understand; a residual bit of authoritarian paternalism. If “patient-reported outcomes” mattered, everyone would be eating while on HD!
Feeding during dialysis seems like a flash in the pan, where protein restriction is a tried and true warrior.

Ladies and Gentleman, I give you, your Saturated 16! 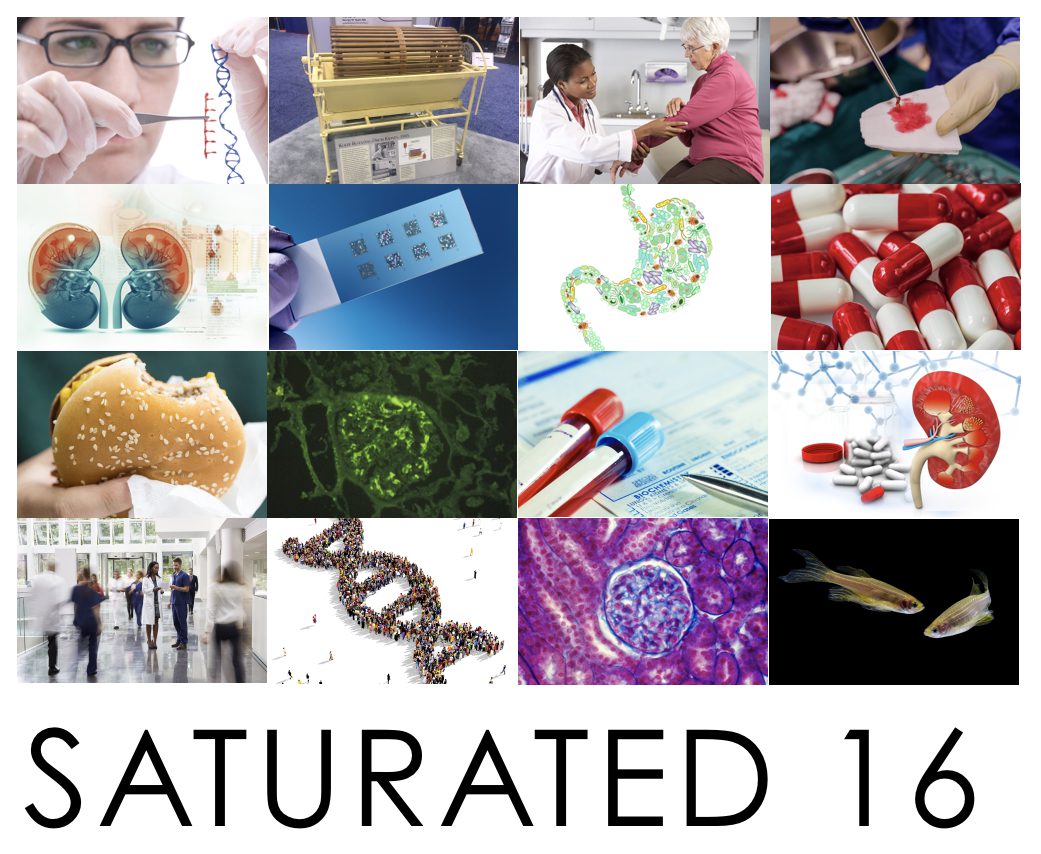 On Wednesday, March 29, look for the Effluent 8!