As I settle into my chair at our weekly afternoon city-wide biopsy conference, stuffed from overeating at lunch, I look forward to the case that will be presented by the fellows. This week, the patient is a 38-year-old East Asian man presenting with hematuria and proteinuria. From the first sentence, I form a biased differential diagnosis in my mind, starting with IgA nephropathy and ending with IgA nephropathy. As we listen carefully to the fellow at the podium, we find out that the patient also has a history of gross hematuria. His blood pressure is 120/72 mmHg, and his serum creatinine is 0.9 mg/dL (eGFR = 92 ml/min). Serologic workup, including complements, is normal, and his urine is active with 2.7 g/g of proteinuria.

The fellow sits down, breathing a sigh of relief that no questions were asked. Dr. Ed Lewis, who is moderating the conference today, asks the opinions from the fellows and attendings in the audience. Most agree that it is a classic presentation for IgA nephropathy, but some chime in with relatively unlikely suggestions such as immunotactoid, C3 glomerulopathy, or Fabry’s disease. “Let’s see the biopsy,” says Dr. Lewis. The Wheel of Nephrology spins, choosing a seasoned second-year fellow who must now get up and read the pathology.

After reading the intricate pathology carefully, she correctly calls out the diagnosis: IgA nephropathy. There are 20 glomeruli, two with active crescents and four with segmental necrotizing lesions. All glomeruli show mild to moderate mesangial hypercellularity, and there is no tubulointerstitial fibrosis. The immunofluorescence microscopy is purely a mesangial IgA pattern, the electron microscopy is consistent with this, and the foot processes are preserved. One glomerulus of the light microscopy is shown below: 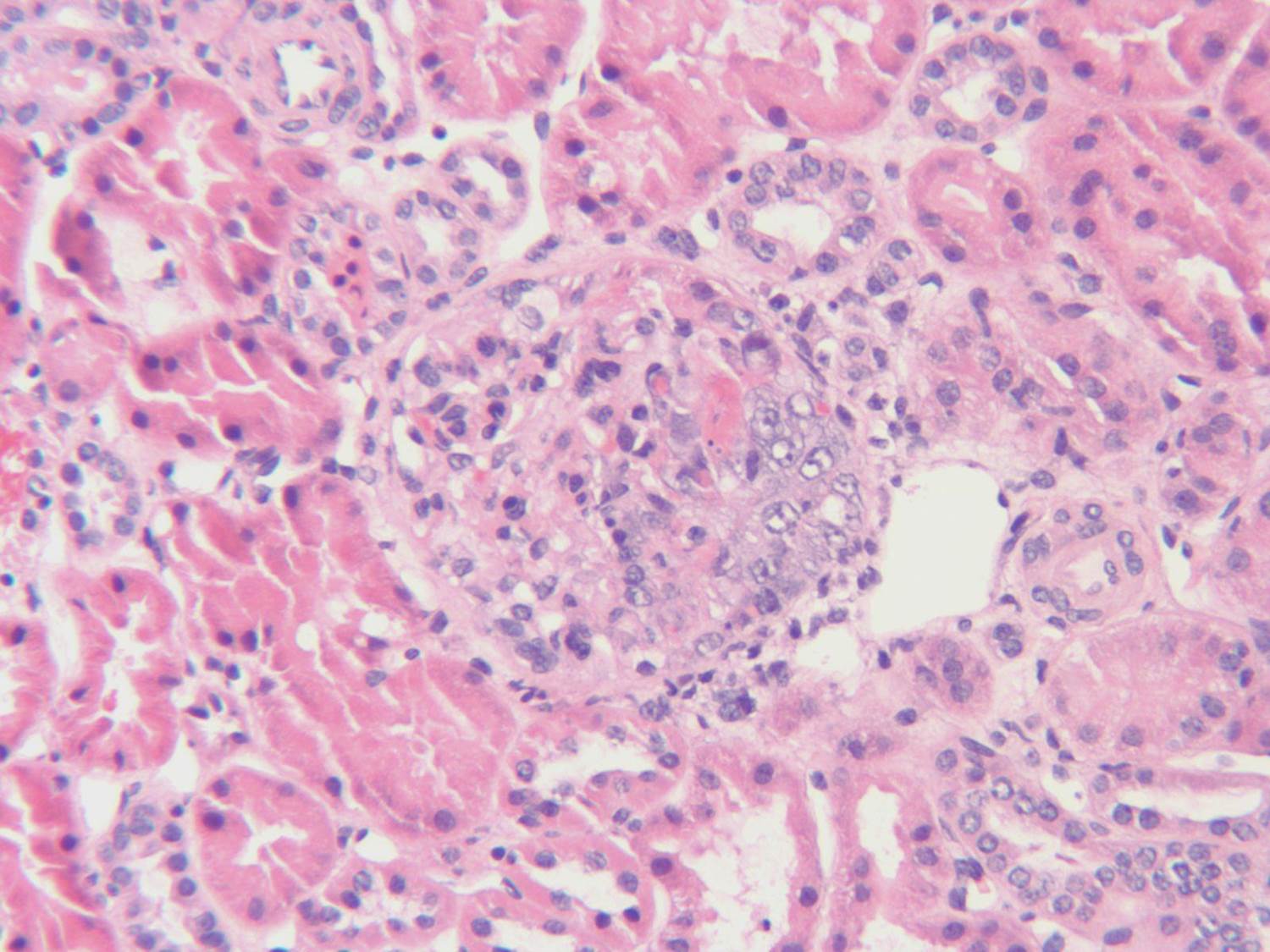 “Anyone for tonsillectomy?” asks Dr. Lewis, with a wry chuckle, as he takes the podium. He asks the audience for treatment options.

What are the options for this case? The clinical presentation, pathology, and final diagnosis are straightforward, but when it comes to treatment, my head spins faster than the “Wheel of Nephrology.” As in most other glomerular diseases, we will treat with aggressive therapy if there is a high likelihood of progression to end stage renal disease (ESRD) and if this therapy is efficacious. With a normal blood pressure and creatinine, this patient at first glance appears to have a good prognosis.

However, based on his degree of proteinuria as well as his significant inflammation in the biopsy, with the degree of endocapillary inflammation and 10% crescents, his prognosis becomes less favorable. How can we improve it? Does his ethnicity affect our decision? Could we get away with angiotensin converting enzyme inhibitors (ACE-i) or angiotensin receptor blockers (ARB) alone? Knowing that this patient may have more than 60 years of life left, can we wait on immunosuppressive therapy or does it risk the potential to develop interstitial fibrosis and glomerulosclerosis? If we wait too long, what if he progresses past the “point of no return?” Or, because of the crescents, do we use cyclophosphamide with high dose steroids? Perhaps the patient needs something in-between? Can the treatment options for this “straightforward” case really be this far apart?

A variety of opinions are offered. One nephrologist, influenced by the initial clinical presentation, says he would give an ACE-i or ARB and wait up to 6 months, as the proteinuria can improve over time with this therapy (Coppo R et al, Li PK et al, Praga M et al). Another nephrologist, influenced by the crescent that is still displayed on the screen, says we must give solumedrol followed by cyclophosphamide and prednisone to “turn off the inflammation.” One fellow interjects with, “We could try MMF (mycophenolate mofetil).“ An attending says, “I use prednisone,” and the discussion shifts to what dose and how long, quoting positive studies from Pozzi et al, Manno et al, and Lv et al, as well as discussing the risks of immunosuppression and lack of benefit noted in the recent Stop-IgA trial.

The discussion gets heated, the opinions get stronger (or at least louder), but all in the good-natured give-and-take of the conference. The most consistent theme is giving some form of immunosuppressive therapy to affect the histologic activity and attenuate the proteinuria, as this is the best way to alter his future prognosis (Coppo R et al, Inker et al, Locatelli F et al, Reich HN et al).

Before I speak, I quickly look at the UpToDate® app on my mobile phone for some backup. “The authors for this section do not presently agree…” That figures. Dr. Lewis asks my opinion, and I say, “I would treat with low dose prednisone and MMF,” making some heads turn and raising a few unilateral eyebrows. This is new: I would not have said it before reviewing the study by Hou et al recently published in AJKD.

The investigators found that both groups achieved an equal amount of remission and with similar degrees of adverse events. In the high dose prednisone group, there was a higher percentage of new onset diabetes mellitus as well as Cushing’s syndrome, although the latter is a subjective diagnosis and was disproportionately higher (47%) than reported in other studies. There was also a legacy effect of the treatments for both groups, achieving further remission in the six months after therapy was completed. When repeat biopsy was performed (19% of the patients), the crescents and necrosis disappeared, even in the high dose prednisone group. At one year, about 80% of patients (equal in both groups) achieved a clinically meaningful response, defined as proteinuria less than 1 g/day.

For a long time, the only proven therapy for IgA nephropathy was ACEi/ARBs and possibly fish oil, and data on the treatment of those with more inflammation or higher amounts of proteinuria was sparse. Now, there are some options, although the literature on immunosuppression for IgA nephropathy is as heterogeneous as the disease itself. The studies provide mixed results for prednisone (Pozzi et al, Manno et al, Lv et al, Hogg RJ et al, Julian BA and Barker C, Katafuchi R et al) as well as MMF (Tang SCW et al, Frisch et al, Hogg et al, Maes et al). The STOP-IgA trial, the multicenter trial undertaken to finally answer the question of immunosuppression in IgA, failed to show a benefit in the decline of GFR over three years. However, one of the common themes in the negative trials of IgA nephropathy was the inclusion of clinically and histologically variable patients.

IgA nephropathy is an extremely heterogeneous disease, ranging from some patients with a less than 1% chance of progression to ESRD to others having a greater than 50% chance of progression (Geddes CC et al). Hou et al should be congratulated on defining the specific subset of IgA they wanted to study. They showed that high dose prednisone and MMF with low dose prednisone were both efficacious for this inflammatory subset of patients with IgA. This study positively answered the question the authors proposed.

However, these therapies should not be extrapolated to all patients with IgA. MMF has only been shown to be efficacious (Tang SCW et al) in Asians: is it because of ethnicity? Or is it more that the North American (Frisch et al, Hogg et al) and European (Maes et al) studies of MMF were histologically diverse? What is the effect of adding on low dose prednisone to MMF? As the dose of MMF was only 750 mg twice daily, what is the optimal dose of MMF for the non-Asian patient? With only one year of follow-up, will the legacy effect be persistent?

Before considering this as the first-line therapy or the “standard of care” on a worldwide stage, longer follow-up and duplication in non-Asian populations must be completed. But for now, “the Wheel has spoken.”

MMF and low dose prednisone can be added to the list of therapies as an option for patients who have a preserved GFR and active proliferative IgA nephropathy with a high clinical risk of progression.