A recent narrative review by Clive and Vanguri published in AJKD looks at the Syndrome of Tubulointerstitial Nephritis With Uveitis (TINU). Test your knowledge on this rare disorder with these clinical vignettes.

1. A 23-year-old woman presents to her primary doctor’s office with complaints of fevers, sore throat, rhinorrhea, mild conjunctivitis, and nonproductive cough. She has no past medical history and is otherwise healthy. On exam, temperature is 38.3°C and her oropharynx is erythematous without plaques or ulcers. There is no lymphadenopathy and her conjunctiva have mild bilateral erythema. A rapid strep test is negative. She was treated with augmentin and sent home. One week later, she presented to the emergency department with low grade fever and maculopapular skin rash on her chest. Her sore throat, cough, and conjunctivitis have improved. She denies use of NSAIDs or herbal medications. Laboratory values: Na+ 138 mmol/L, K 4.2 mmol/L, Chloride 108, HCO3 21, BUN 18 mg/dL, creatinine 1.9 mg/dL, calcium 9.1, glucose 82, albumin 4.0 g/dL. WBC 8.7 (13% eos), Hgb 12.7 g/dL, HCT 37%, platelets 307k. UA pH 6.0, sp grav 1.015, negative glucose, tr protein, negative blood, 10 wbcs, 0-5 rbcs, no casts, urine culture negative. Further workup reveals urine protein 150 mg/dL, urine albumin 11 mg/dL, urine creatinine 144 mg/dL. Fractional excretion of beta-2 microgloblulin is high. Her renal ultrasound and chest radiographare unremarkable. Her augmentin is discontinued and two days later her serum creatinine was 1.4 mg/dL. At this point, which one of the following would you recommend?
Recommend supportive care
Correct! The patient is a young woman who presents with fever, maculopapular rash, eosinophilia, and acute kidney injury after exposure to augmentin. Her urine findings are consistent with a tubulointerstitial pattern of injury, with predominantly tubular proteinuria, an acidification defect, and sterile pyuria. Urine eosinophils are neither sensitive nor specific and thus have little diagnostic value. The most common tubulointerstitial kidney injury is from drug exposure, frequently from antibiotics, proton pump inhibitors, and nonsteroidal anti-inflammatory drugs, although NSAID-associated AIN usually present more indolently. Checking an ACE level to evaluate for sarcoidosis, an IgG-4 level for IgG-4 related disease, or performing a dilated fundascopic exam to look for uveitis/TINU can all be considered, as these diseases also give rise to a tubulointerstitial pattern of renal injury. TINU also classically presents with a viral-like prodrome. However, these tests, as well as a renal biopsy, should be performed when another obvious acute cause is not apparent (in this case, acute interstitial nephritis secondary to augmentin). Treatment of acute interstitial nephritis is directed at removing or treating the underlying cause, and in this case, cessation of augmentin was enough to improve her renal function. Steroid therapy can be considered if there is no immediate improvement, as delaying this therapy can result in significant chronic kidney disease. Follow-up is important as tubulointerstial kidney injury may not completely resolve or may recur.
Perform a renal biopsy
Incorrect.
Consult ophthalmology for slit lamp examination
Incorrect.
Order an IgG-4 level
Incorrect.
Order an ACE (angiotensin converting enzyme) level
Incorrect.
2. The pathogenesis of tubulointerstitial nephritis and uveitis (TINU) is most likely related to which one of the following mechanisms?
Antibody against type IV collagen present in the proximal tubule brush border and the uvea
Incorrect.
Autosomal dominant condition affecting the epithelial sodium channel leading to cyst development and tubulointerstitial disease
Incorrect.
T-cell response to an inciting trigger generating a cascade of inflammation in the uvea and renal tubulointerstitium including cytokines and recruited B cells in genetically susceptible individuals based on HLA clustering
Correct! The most likely pathophysiology from available evidence is that TINU is an autoimmune disease that affects genetically susceptible individuals based on HLA clustering studies. There is usually an inciting trigger, which may resemble an infection, but the search for infectious etiologies is most often negative. The trigger gives rise to a humoral reaction, most likely an antibody response to modified C-reactive protein (mCRP), as these antibodies and mCRP co-localize in the uvea and kidney. A cellular-, or T-cell-, mediated process is present as well, based on biopsy features revealing lymphocytes and monocytes. [Scroll to Figure 2 at the end of the quiz]
X-linked condition which affects the genes that encode for Type IV collagen present in the tubular epithelium and uvea
Incorrect.
3. A 21-year-old woman presents for evaluation of acute kidney injury. Four days ago, she presented with bilateral burning of her eyes and blurry vision. A slit lamp examination revealed bilateral anterior uveitis. Laboratory studies drawn the next day were normal except for a serum creatinine of 1.8 mg/dL. She was taking no medications or supplements. Her UA revealed 1+ protein, glycosuria, and pyuria. The urine culture was negative and her serum ACE, ANCA, ANA, SSA/SSB, IgG-4, and chest radiograph were negative or normal. A renal biopsy demonstrated acute lymphocytic interstitial nephritis with monocytes. The glomeruli were uninvolved [Scroll to Figure 1 at the end of the quiz]. The ophthalmologist began topical steroids for her uveitis. Which one of the following would you recommend at this time?
Begin mycophenolate mofetil
Incorrect.
Begin oral prednisone
Correct! As TINU is a rare disease, there are no randomized controlled trials that guide. Topical steroids are effective for anterior but not posterior uveitis, and can be used when the renal disease is in remission. However, this patient has active biopsy- proven interstitial nephritis with a reduced GFR and requires additional therapy beyond topical steroids. The first line therapy based on case reports and consensus opinion is oral prednisone at 1 mg/kg/day. The length of therapy is usually three to six months, but varies depending on the response. Other therapies such as mycophenolate mofetil, methotrexate, or cyclosporine can be used for remitting or refractory disease, or when there is a contraindication to prednisone.
Begin rituximab
Incorrect.
Agree with topical steroids alone as they will be effective for the uveitis and kidney disease
Incorrect.
Begin intravenous immunoglobulin (IVIg)
Incorrect.

Histopathologic photomicrographs from ultrasound-guided percutaneous needle biopsy of the left kidney of the patient described in the case vignette. Figure 1 from Clive and Vanguri, AJKD © National Kidney Foundation. 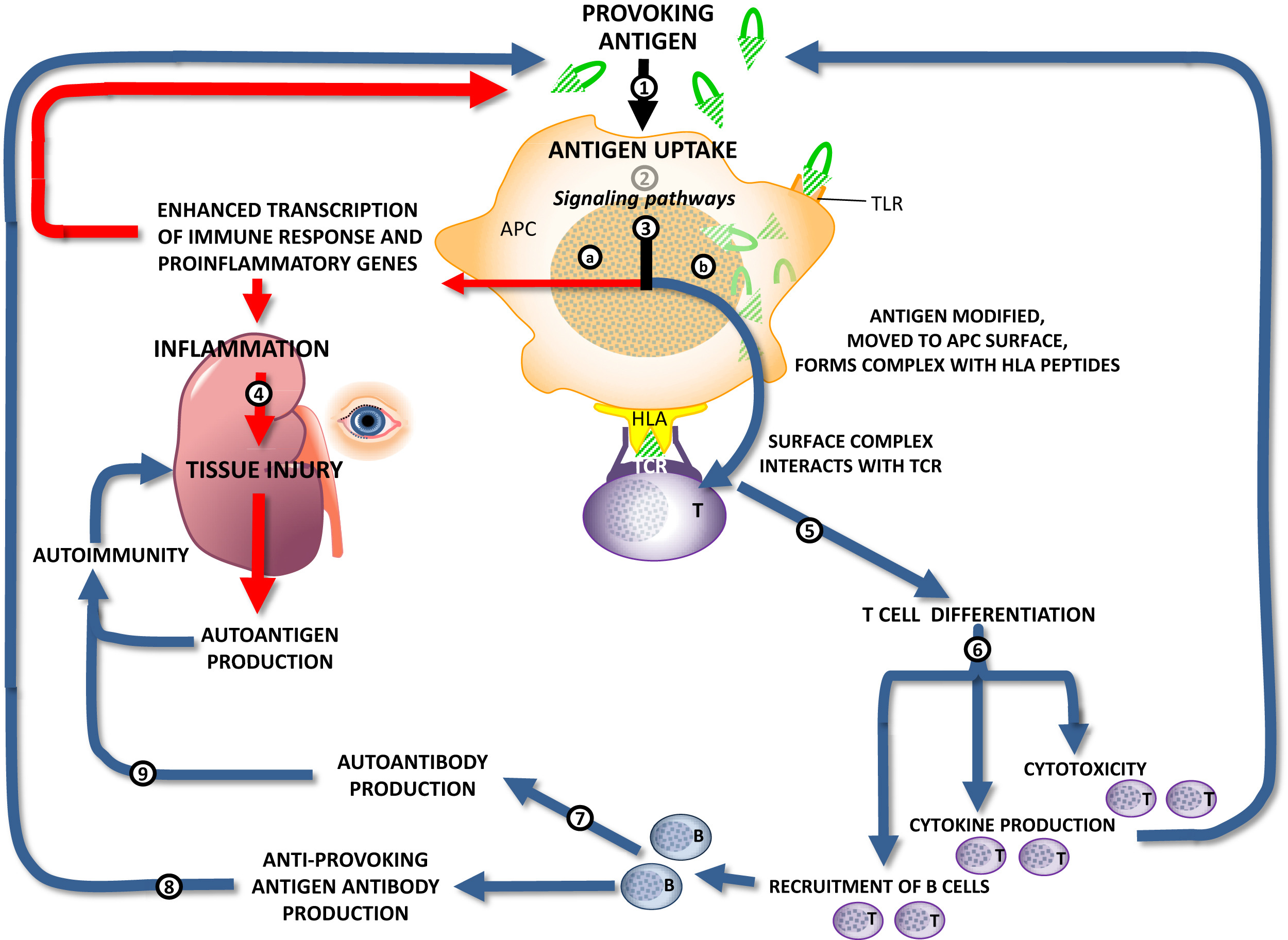