Hypertension (HTN) has long been associated with negative cardiovascular (CV) and renal outcomes, resulting in heart failure, vascular intimal thickening, chronic kidney disease (CKD), and eventually end-stage kidney disease (ESKD); however, there is not much known about blood pressure (BP) trajectories in young adulthood and their consequent effects of cardiovascular and renal outcomes.

Recommendations and guidelines on treatment of HTN have been controversial to say the least. The largest and most impactful studies that have studied CV outcomes of different BP targets (such as ACCORD and SPRINT) were conducted based on one-time BP measures as opposed to changes in BP over time. Additionally, the population studied had a mean age of ≥60 years with very few young adults included. Although the latest 2017 ACC/AHA guideline on BP management applies to all adults 18 years and older, there has been insufficient data to guide screening, monitoring, and treatment goals in the young adult population. Given the fact that HTN usually develops later in life, monitoring BP trajectories could be a reasonable alternative to one-time BP measurement in studying deleterious effects of elevated BP on renal and CV outcomes in this population.

Coronary Artery Risk Development in Young Adults (CARDIA) was a prospective cohort study on over 5,000 individuals between the ages of 18 and 30 years in 1985-1986 in four cities (Chicago, IL, Minneapolis, MN, Oakland, CA, and Birmingham, AL) followed over a course of 20 years. Based on data from CARDIA, Allen et al reported that higher BP trajectories throughout young adulthood were associated with increased risk of coronary artery calcification. Results of the CARDIA study emphasized the importance of early monitoring and detection of risk factors for CV disease – individuals who have higher BP levels at a younger age tend to develop negative CV outcomes earlier in life, even when not meeting diagnostic criteria of HTN. Although CARDIA shed light on the importance of early detection and monitoring of BP regarding CV outcomes, the question remains whether BP trajectories in young adulthood effect kidney function later in life.

A recent publication in AJKD by Ku et al utilized data from CARDIA and studied the association between changes in BP during young adulthood and subsequent decline in kidney function. In this observational cohort study, 3,429 participants of CARDIA between the ages of 18 and 30 years were included with relatively even distributions between sex and white/black race. BP measurements were collected from visits at year 0, 2, 5, 7, 10, 15, and 20; kidney function data including eGFR and urine albumin were collected at three time points (years 10, 15, and 20). eGFR was measured based on Cystatin C concentration. 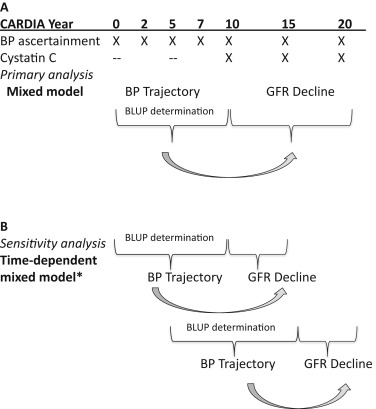 Multiple models were designed to adjust for potential effects of constant factors such as race, sex, comorbidities, and variables such as BMI, DM, smoking, antihypertensives, income, and education. As a previous study from CARDIA revealed increased albuminuria with exposure to higher systolic BP and its association with decreased GFR, its effect on the results was analyzed as a potential confounding factor. Ku et al concluded that increasing BPs over a 10-year time span in young adulthood are significantly associated with early kidney function decline in individuals without decreased kidney function or clinical hypertension at baseline. Their data suggested the higher the slope of rise in SBP and diastolic BP (DBP), the higher rate of decline in kidney function independent of albuminuria or sole BP reading at year 10. There was a stronger association between DBP and early decline in kidney function in the younger population. Although the decrement in eGFR was no more than -0.9 ml/min/year, the accumulation of these over a lifetime would become significant.

The findings of this study speak to the importance of the pattern for rise in BP as a better predictor of long-term renal outcomes and identification of at-risk population, even if BP measurements do not meet current definition of HTN. While focus has been conventionally on the association of SBP with CV outcome, especially in the middle-aged and elderly, this study also attracts attention to more prominent adverse kidney outcomes of elevated DBP in younger adults.

In conclusion, these findings support early detection of at-risk individuals even in the absence of overt hypertension. Close monitoring, education, and more intense management of comorbidities in patients with continual increases in BP over time may eventually decrease the cost and burden of CKD/ESRD. Further studies are needed to answer questions such as ideal timing of screening initiation, monitoring frequency, criteria for intervention and medical management, and goals of therapy in these individuals.