AJKDBlog: Backing up from the CKD perspective, we have been trying to combat the public health threat of tobacco use for several decades now. How has the USA done over the years with regards to smoking rates and how does this compare to other countries in the world?

(PF/MA): The United States has seen a decreasing prevalence of cigarette-smoking since the first half of the 20th century with a continuing decline in recent years. Data from the 2016 National Health Interview Survey (NHIS) showed the prevalence of cigarette smoking in adults was 15.5% compared to 20.9% in 2005. Subgroups with higher prevalence included adults who were male, lived below the federal poverty level, or lived in the Midwest or South. However, prevalence did not decline between 2015 and 2016. Like other very high-human development index (HDI) countries, the US is in the fourth stage of the tobacco epidemic, demonstrating declining prevalence and smoking-attributable deaths.

AJKDBlog: Nephrologists and internists are familiar with the detrimental effects of tobacco use when it comes to pulmonary disease, cancer, and cardiovascular/cerebrovascular disease. However, it is less common to link tobacco use to CKD. Obviously, there is no randomized controlled data to guide us here, but is there data to suggest that patients with heavy tobacco use lose GFR at a faster rate than those who don’t smoke? And if so, what is the effect so we can use this to counsel our patients?

(PF/MA): The data regarding the effects of cigarette smoking on renal function are relatively limited. Multiple retrospective studies have suggested a link between smoking and worsening renal function by measure of time to ESRD. Two more recent multicenter prospective studies have differing outcomes related to kidney disease progression. SHARP demonstrated similar rates of progression to ESRD among current, former, and never smokers. The other, the CRIC study, showed that both never and former smokers were significantly less likely to have CKD progression than current smokers. While there is still no clear answer to this question, it seems reasonable to counsel patients that that there are data to suggest that cigarette smoking may worsen their kidney disease.

AJKDBlog: Can you summarize the data looking at medication interventions in the general population? Specifically, is there an advantage to any particular nicotine replacement therapy (gum, lozenge, spray, inhaler, patch, etc) or medication (buproprion vs varenicline)?

(PF/MA): Pharmacologic options for smoking cessation include medications to reduce cravings (varenicline and bupropion) and nicotine replacement therapy (NRT). Varenicline more than doubles the odds of smoking cessation compared to placebo and has demonstrated superiority to bupropion alone and single-agent NRT, making it the most effective FDA-approved single-agent therapy. Bupropion increases quit rates approximately 80% above placebo and is equally efficacious to single-agent NRT. It is also FDA-approved for treatment of major depressive disorder.

Nicotine replacement therapy is available in multiple formulations, and is most effectively used by combining the nicotine patch (a long-acting agent) with a short-acting nicotine agent of the patient’s choosing. Bupropion can also be used in combination with NRT for improved efficacy.

AJKDBlog: As you mention, much of the data on smoking interventions for CKD patients are extrapolated from the general population. Figure 1 and Table 4 nicely outline a flowchart for assessing if patients are prepared to quit and the pharmacologic therapies available. What additional factors need to be considered in CKD (or ESRD) patients when considering some of the pharmacologic options?

(PF/MA): All of the pharmacotherapies that have been proven effective for smoking cessation can be used cautiously in patients with renal impairment. The nicotine replacement therapies have no defined dosing adjustments based on kidney function. Dose reduction for varenicline is recommended in patients with CKD or ESRD and should also be considered in bupropion. Of note, while black box warnings concerning neuropsychiatric events have been removed for both varenicline and bupropion, symptoms of unstable mood disorders should be carefully considered when monitoring response to therapy. This concern may be especially relevant in patients with kidney disease, who have greater risk for depression and anxiety compared to the general population. 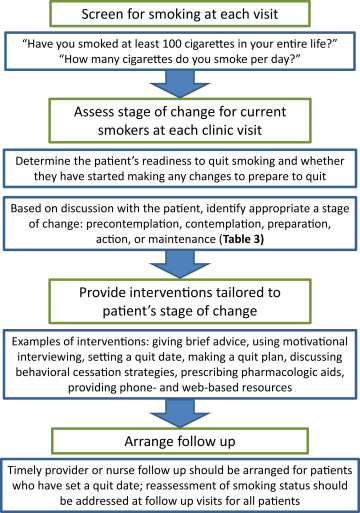 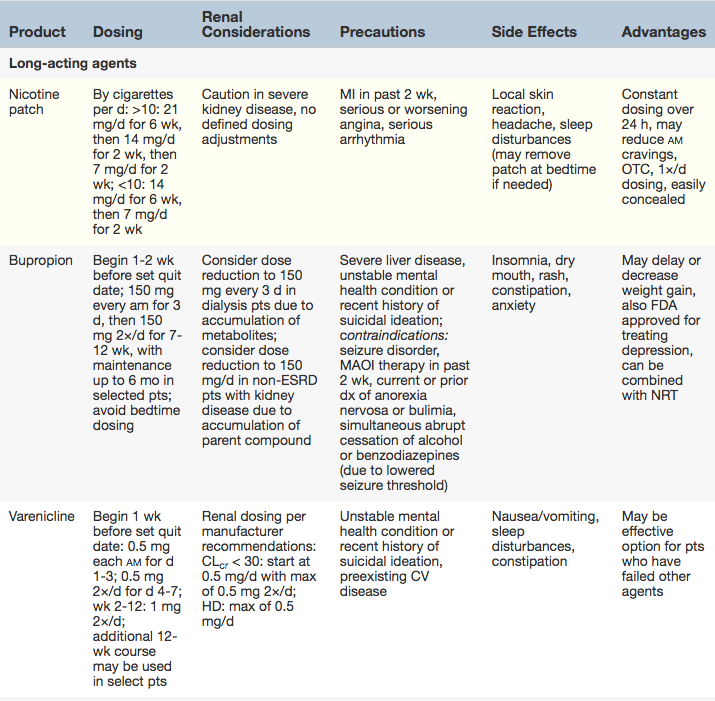 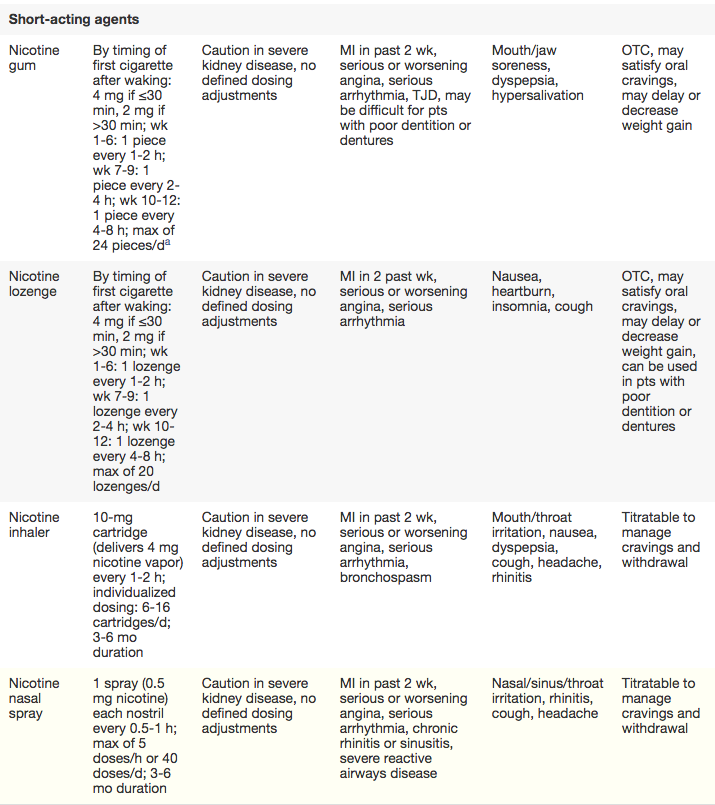 AJKDBlog: You comment briefly on e-cigarettes at the end of your paper. As a nephrologist, I found it interesting that the liquid contains propylene glycol, which can cause an anion-gap metabolic acidosis. Are there health concerns for these devices with regards to the chemical composition as this liquid is aerosolized and inhaled?

(PF/MA): Electronic cigarettes use heat to vaporize a nicotine solution. The sweet-flavored solutions have been found to contain significant levels of diacetyl and acetyl propionyl, which adversely affect the lungs when inhaled. The vapor has been found to contain at least trace amounts of multiple toxic substances, including known or possible carcinogens. Additionally, a recent study demonstrated that levels of toxic metals were considerably higher in the device tanks and aerosol samples as compared to the refilling dispensers, suggesting that metals are transferred from the device. Patients who prefer to use electronic cigarettes for smoking cessation should be counseled that little is known regarding the long-term health effects associated with e-cigarette use.

AJKDBlog: Thank you both for taking the time for this interview!