Editor’s Note: We asked authors of Original Investigations to provide short plain language summaries that would briefly summarize what inspired their study, the basic approach taken, what was learned, and why it matters. We hope our readers will find this valuable in helping them keep up with the latest research in the field of nephrology. From the November 2018 issue: 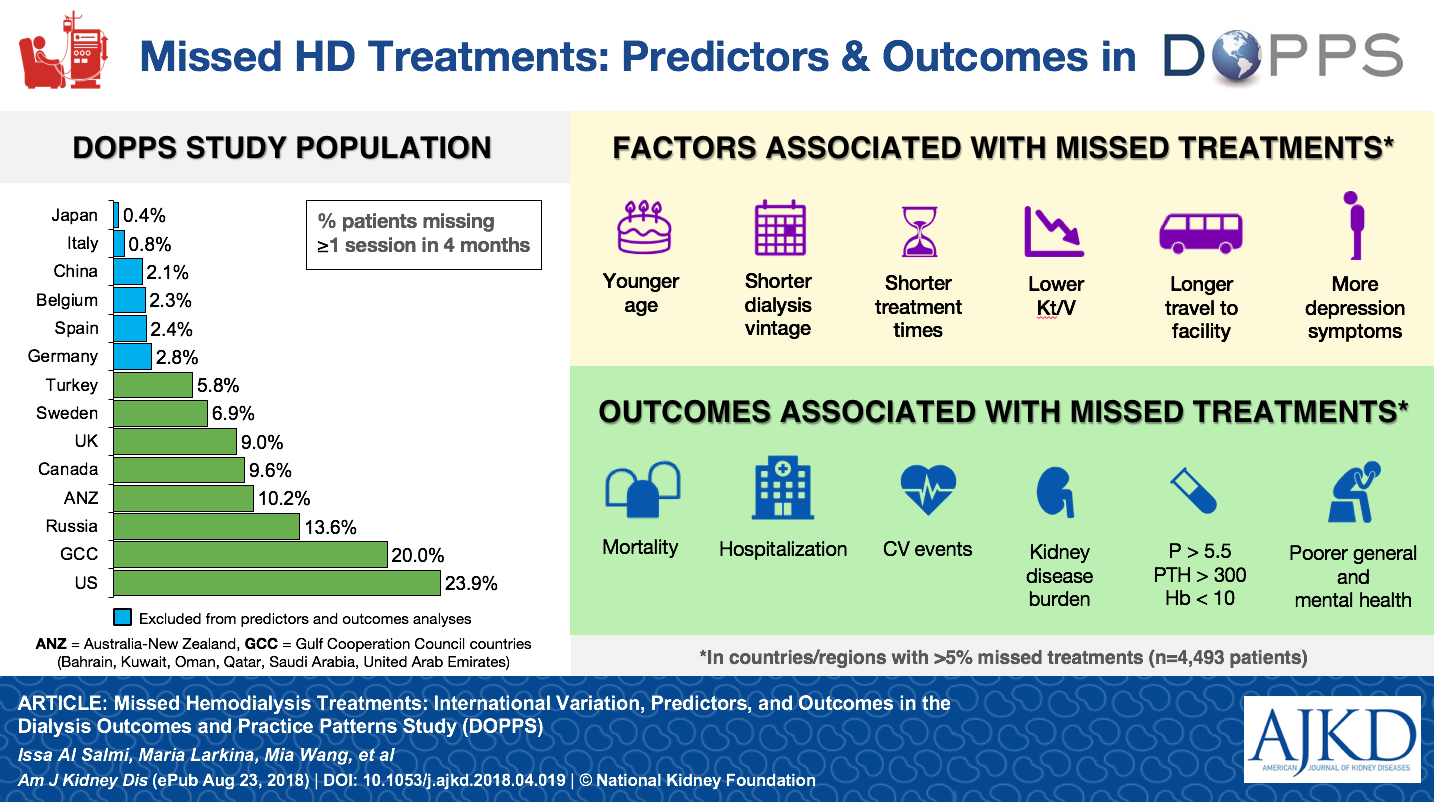 Editorial Missed Hemodialysis Treatments: A Modifiable But Unequal Burden in the World by Steven Menez and Bernard G. Jaar [FREE]

Trends in Albuminuria and GFR Among Adolescents in the United States, 1988-2014 by Sharon H. Saydah et al

From the authors: The prevalence of kidney disease among United States adolescents and how it changed over time is largely unknown. Similar to adults, kidney disease in youth is defined by the presence of elevated albumin in the urine (albuminuria) or reduced kidney function, also called markers of kidney disease. Our objective was to assess trends in these markers among adolescents aged 12-18 years participating in the National Health and Nutrition Examination Surveys (NHANES) between 1988 and 2014. We found that the overall prevalence of albuminuria has not changed significantly over time. The prevalence was significantly lower with repeated measurements, suggesting that using a single measurement severely overestimates kidney disease. Less than 1% of adolescents had reduced kidney function, although this marker increased over the study period. These results point to the particular importance of repeated albuminuria determinations, or the use of more sensitive markers for identifying adolescents with kidney disease.

Editorial CKD in Children: The Importance of a National Epidemiologic Study by Sun-Young Ahn and Marva Moxey-Mims [FREE]

Editorial Diabetic Kidney Disease: The Tiger May Have New Stripes by Kausik Umanath and Julia B. Lewis [FREE]

From the authors: Tobacco smoking might not influence patients suffering from end stage renal disease (ESRD) to the same extent as the general population. We investigated the association of tobacco smoking status with mortality and hospitalization among a large and diverse group of the incident hemodialysis (HD) population with various comorbidities. We found that the probabilities of mortality and hospitalization were higher among HD patients who smoked and that the increased risk may be worse for younger individuals. Patients with diabetes were found to have an increased risk of outcomes associated with smoking that was similar to patients with coronary artery disease (CAD) or congestive heart failure (CHF). Second-hand smoke was not observed to be associated with increased risks of hospitalization and mortality.

From the authors: Cognitive impairment is highly prevalent and associated with an increased risk of death in patients on peritoneal dialysis (PD). Few studies have explored the change in cognitive function among PD patients. Therefore, we evaluated cognitive function in a group of PD patients at the beginning of the study and after two-year follow-up. The prevalence of cognitive impairment increased during the follow-up. Global cognitive function declined over two years, even though executive function, immediate memory, and visuospatial skill improved. Delayed memory capacity and language ability remained unchanged. Serum albumin, advanced age, lower education, and depression were associated with cognitive decline. Cognitive impairment was also found to be associated with increased risk of being hospitalized and being transitioned to hemodialysis. The findings of our study could help us to find new strategies for preventing cognitive decline by correction of these risk factors. 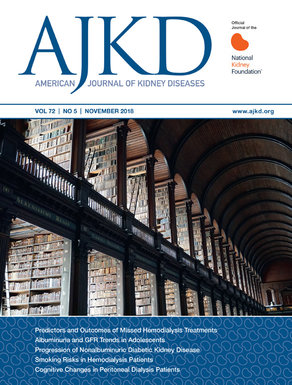 On the Cover: The grandeur and scale of the Library of Trinity College in Dublin, Ireland, echoes the vastness of the information it contains. As impressive as these magnificent buildings and the thousands of volumes they hold are, information is not knowledge, and no simple metric fully tallies understanding or wisdom. Quantifying comprehension of complex, voluminous, and evolving areas of medicine can be as challenging as drawing conclusions about the skill with which it is applied to clinical problems. The medical community must design and implement these assessments used for professional recertification, a task faced by the ABIM in crafting the Maintenance of Certification (MOC) program. This month’s AJKD contains two provocative viewpoints on transforming the recertification process for those specializing in nephrology:

Maintenance of Certification, Self-regulation, and the Decline of Physician Autonomy by Tod Ibrahim [FREE]

The photograph “Trinity College, Dublin, Ireland” is by Jack Reichert on Unsplash. Released under the Unsplash license.