A 50-year-old white woman with diabetes, hypertension, and morbid obesity underwent gastric bypass. The surgery helped the patient to reduce weight but progressive renal failure led to a deceased donor transplantation seven years later. End-stage kidney disease was attributed to diabetes mellitus and hypertension but no biopsy was done for a definitive diagnosis.

Three months after transplantation, a rise in serum creatinine to 5.3 mg/dL prompted an allograft biopsy. Initially, interstitial inflammation and tubular injury led to a diagnosis of Banff grade 1A T-cell-mediated rejection. However, subsequent review at a Quality Assurance Conference led to the observation that the severity of the tubular injury was out of proportion to the degree of inflammation. In addition, intratubular oxalate crystals were noted and a diagnosis of crystalline nephropathy was rendered (Figure 1). A 24-hour urine collection had an oxalate concentration of 151 mg/g creatinine (reference range 1.6 – 37.0). 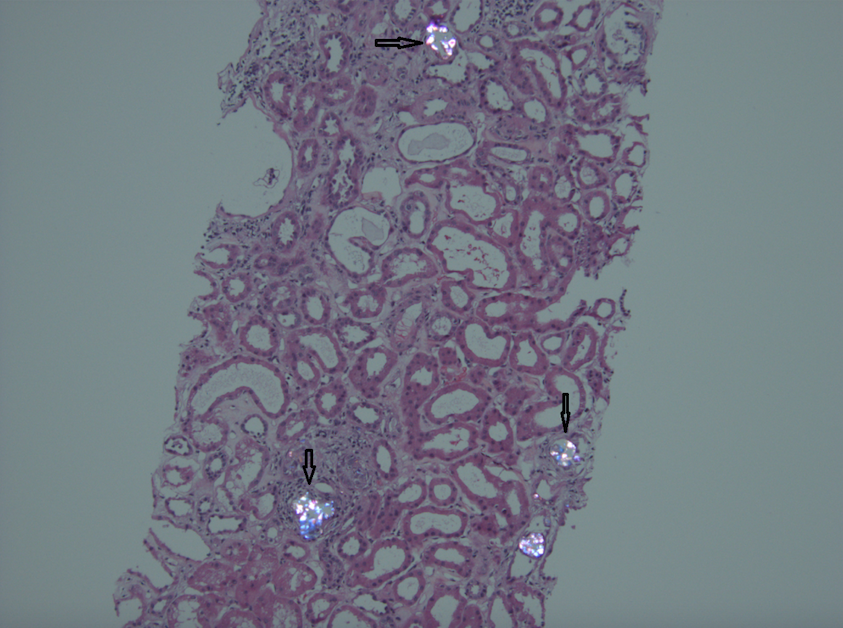 Figure 1. The tubules are dilated and contain proteinaceous casts as well as crystalline material that shows brilliant birefringence on polarization microscopic. A mild interstitial inflammatory infiltrate is present.

This case draws attention to the problem of oxalate nephropathy that can develop after bypass surgery to treat severe obesity. Malabsorption secondary to short gut syndrome leads to steatorrhea. Binding of free calcium to excessive free fatty acids in the bowel lumen reduces the precipitation of dietary oxalate into insoluble calcium oxalate. Overabsorption of free oxalate through the colonic mucosa can result in systemic oxalosis, one manifestation of which can be chronic renal failure. This problem is particularly likely to happen after a jejunoileal bypass, which can result in food bypassing long segments of the small intestine. For this reason, this procedure has been abandoned in favor of procedures such as Roux-en-Y gastric bypass, gastroplasty, and gastric banding.

This patient was managed with a low-fat and low-oxalate diet, high fluid intake, oral calcium carbonate with meals, and dialysis at an initial frequency of 5 times a week for oxalate clearance. Dialysis was subsequently reduced to twice a week, and the serum creatinine reached a nadir to 1.6 mg/dL but has since risen to 2.9 mg/dL. No repeat biopsies have been performed.