In the United States, approximately 37 million people in the United States have chronic kidney disease (CKD), and in 2016, there were more than 720,000 patients with ESRD on various renal replacement therapies (hemodialysis, peritoneal dialysis, or kidney transplantation). Kidney disease was the 9th leading cause of death in the US in the 2017. Diabetes mellitus (DM), hypertension, and glomerulonephritis are the top three causes of end-stage kidney disease (ESKD) in the US and these diseases often manifest with some degree of proteinuria. In addition to optimal blood pressure control, agents that block the renin-angiotensin system are commonly employed to decrease proteinuria and slow CKD progression in patients with these diseases.

Patients were initially stratified into 2 groups (serum phosphate level ≤4 or >4 mg/dL) and those with serum phosphorus levels <2.5 and >5.5 mg/dL were excluded. Each group was randomized to either one of the following treatments:

The primary outcome measure of this study was the 24-hr urine protein level at the end of 2 treatments periods (with and without sevelamer compared to each pretreatment period). Several secondary outcomes were studied including measurement of office BP, GFR, urinary electrolytes, serum lipid profiles, inflammation, and bone mineral biomarkers. Patients were advised on low protein diets (approximately 0.8 mg/kg) before enrollment and were monitored by a dietician throughout the entire study period. At the time of randomization, 41 patients were on dual RAS blockade (ramipril and irbesartan), while the remaining 12 were on either ACE-I (n=7: six taking ramipril, one taking benazepril) or ARB therapy (n=5: four taking irbesartan, one taking valsartan). 26% of the patients in this study were diabetic. 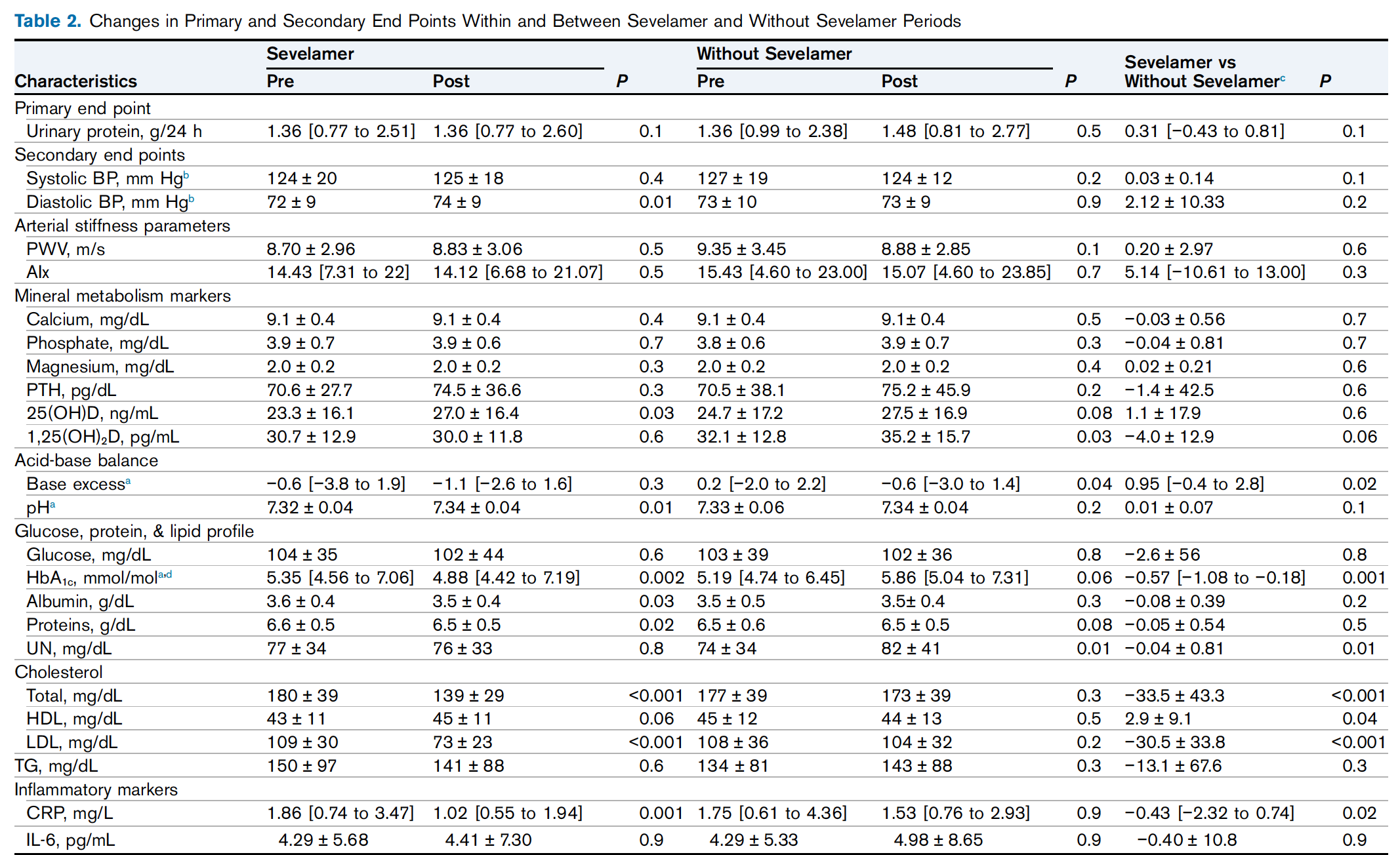 While sevelamar was well tolerated, there was no significant difference observed in 24-hr protein levels at the end of the 2 treatment periods. Similarly there were no significant changes in proteinuria seen in the high or low phosphate groups. Adverse events were similar in the treatment periods, although one case of transient hypophosphatemia was seen during sevelamer treatment. 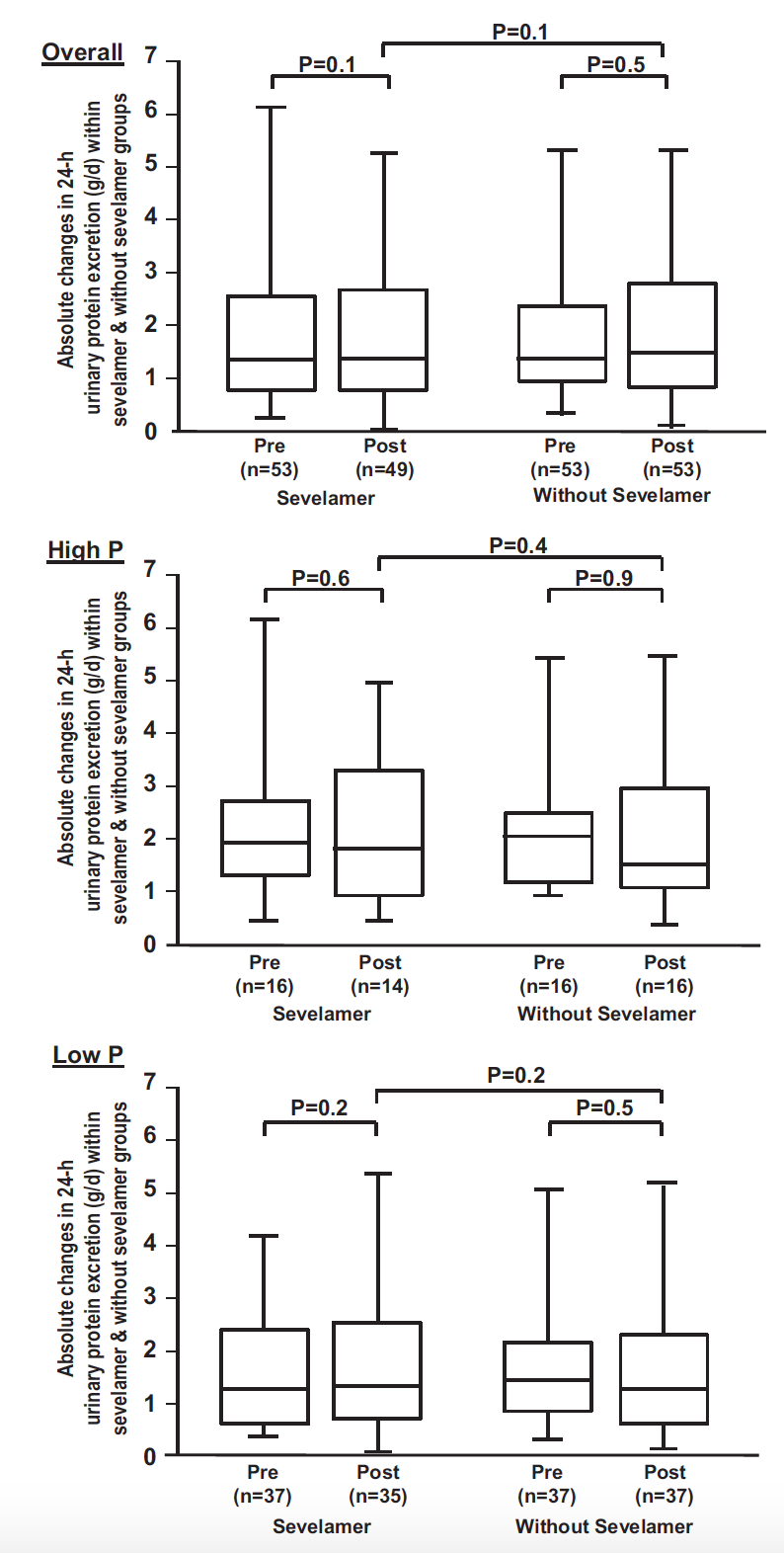 Of note, other studies have also reported decreased C-reactive protein and glycated hemoglobin levels with sevelamer use. Similarly, increased HDL and lowering of both total and LDL cholesterol levels are known beneficial effects of sevelamer that have also been described. ANSWER was a randomized trial with small numbers and shorter duration of treatment, but here sevelamer did not further reduce proteinuria in CKD patients on maximally tolerated RAS blockade. While there may be additional benefits of sevelamar treatment (eg lipid lowering, anti-inflammatory effects), it seems that nephrologists cannot justify using these medications as antiproteinurics or to delay progression of CKD, and they remain relegated to management of hyperphosphatemia at this time.