A 39-year-old woman G9P9 with 8 previously normal vaginal deliveries and healthy children underwent a C-section for fetal malposition. The operation was complicated by intraoperative ureteral and bladder injury, followed by cystostomy repair, ureteral reimplantation, and bilateral ureteral stent placement with estimated blood loss of 4 L. Post-operatively, the patient was anuric and had severe acute kidney injury (AKI) with a creatinine of 7 mg/dl. Dialysis was initiated and the patient underwent a kidney biopsy for high suspicion of atypical hemolytic uremic syndrome due to the presence of schistocytes and thrombocytopenia.

19 out of the 20 glomeruli on the biopsy specimen were infarcted and the renal parenchyma showed extensive areas of coagulative necrosis: 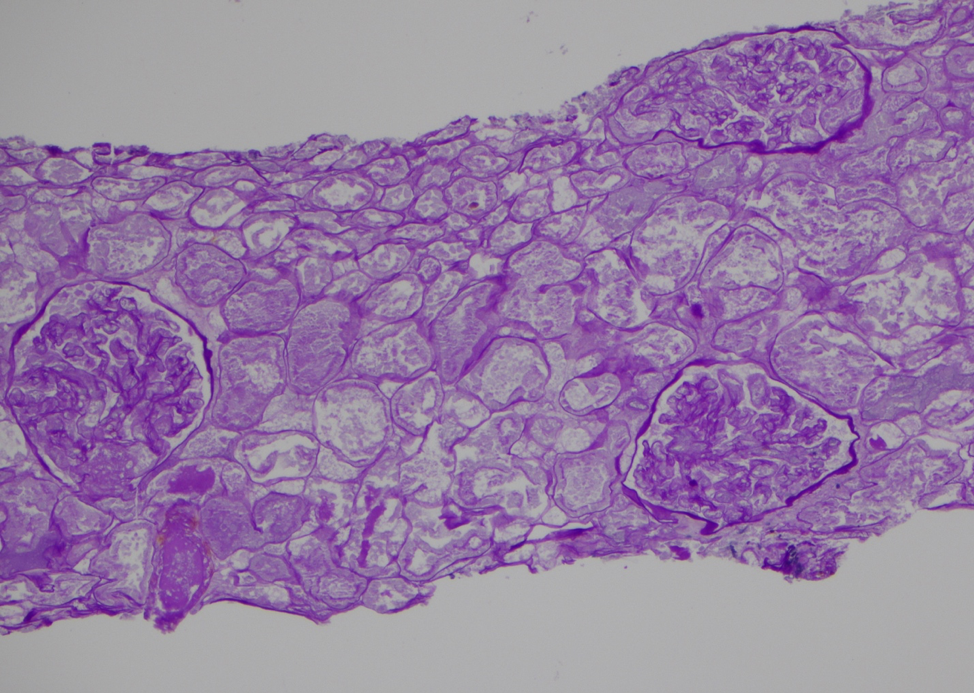 Additionally, the patient underwent computed tomography of abdomen and pelvis with contrast, which showed a rim of hypodensity reflecting cortical necrosis and cortical hypo enhancement indicating that the entire cortex is dead:

Renal cortical necrosis (RCN) is a rare but devastating condition that is most commonly associated with pregnancy-related AKI. RCN consists of a patchy or diffuse ischemic destruction of the renal cortex. The frequent association between pregnancy and RCN remains poorly understood and is seen in obstetric complications such as septic abortions, placental abruption, and intravascular disseminated coagulation. Non-obstetric causes of RCN include snake or scorpion bites and extensive burns. The underlying pathological appearance on a kidney biopsy in RCN is that of coagulative necrosis.

Coagulative necrosis is associated with ischemia or hypoxia in every organ in the body except the brain (hypoxia in the brain causes liquefaction necrosis). The microscopic appearance of coagulative necrosis is that of “ghost cells”. The cell outline and structure is somewhat preserved but the cells are in fact dead without any visibly stained nuclei. It’s like the kidney used to live here at one point of time!

The glomeruli are located in the renal cortex and is supplied solely by cortical arteries which are end arteries. Each kidney weighs one-tenth of other major organs, such as the brain or liver, but receives at least two times the blood supply. If this supply of oxygenated blood is cut off for a prolonged period of time, it can lead to diffuse ischemic destruction of the renal cortex.