Many different definitions of contrast-induced nephropathy (CIN) have appeared in the literature since it was first reported in 1954. It is commonly defined as an acute decline in kidney function following the administration of intravenous iodinated contrast in the absence of other causes. For research purposes, a definition such as a rise in serum creatinine (Scr) ≥ 25 or 50% above the baseline value is often used. Patients often typically present with an acute rise in Scr 24-48 hours post-contrast exposure. Scr generally peaks at 3 to 5 days and then returns to baseline value by 7 to 10 days. The acute kidney injury (AKI) is non-oliguric in most cases with urinalysis often revealing granular casts, tubular epithelial cells, and minimal proteinuria, but in many cases may be entirely bland. Most, but not all, patients exhibit low fractional excretion of sodium due to afferent vasoconstriction. The diagnosis of CIN is frequently obvious if the typical course of events follows the administration of contrast. 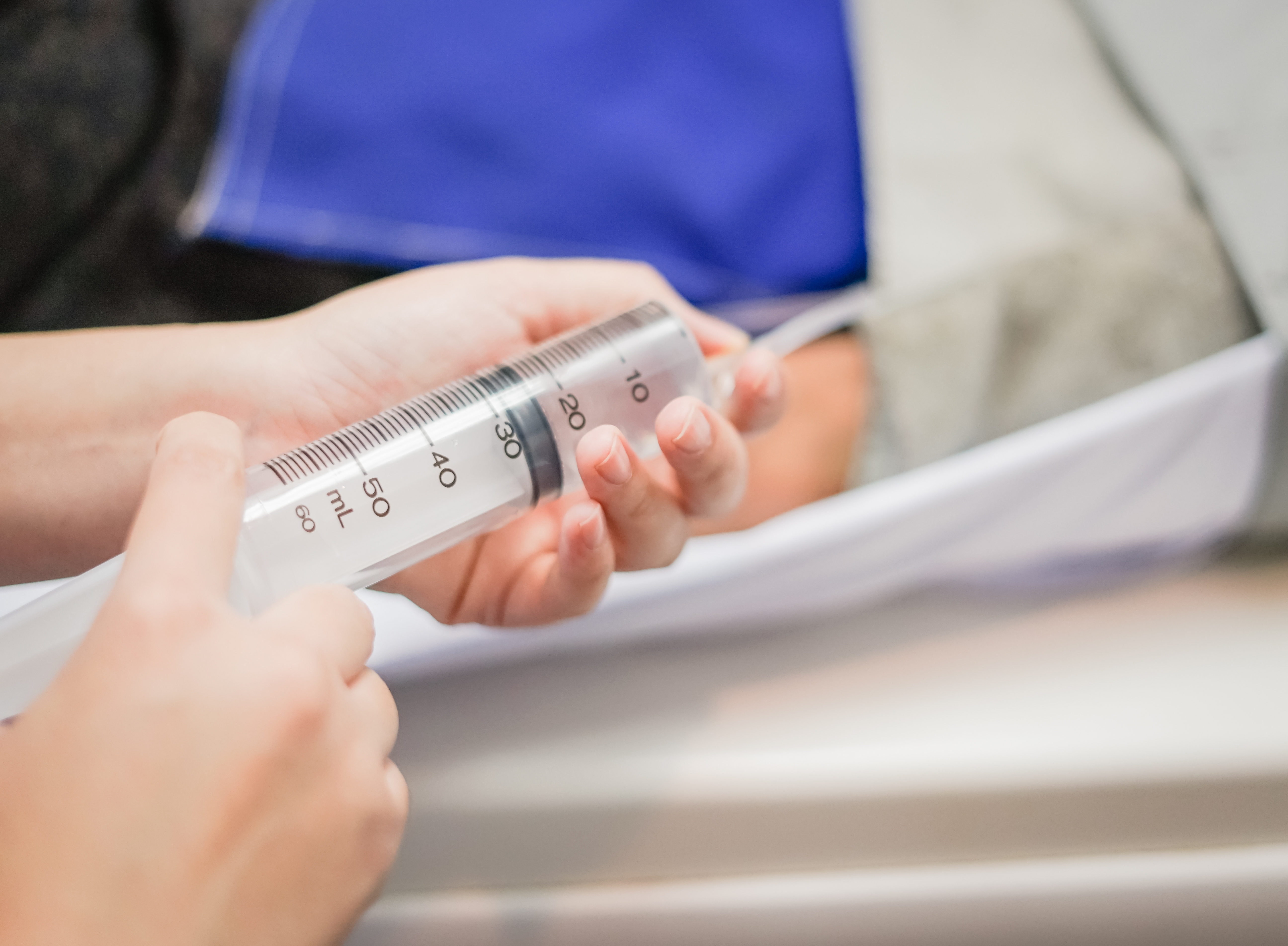 Known risk factors for CIN can be divided into those that are patient-related (underlying CKD, older age, female gender, diabetes, proteinuria, intravascular volume depletion, decreased cardiac output, and co-administration of nephrotoxic agents), and those that are procedure-related (increased dose of contrast media, multiple procedures within 72 hours, intra-arterial administration, as well as type of contrast media used). From the pathophysiological standpoint, contrast media leads to nephropathy via induction of medullary hypoxia (intrarenal vasoconstriction, altered blood rheology, osmotic load), which leads to generation of reactive oxygen species as well as via direct tubular toxicity.

Preventive strategies described in literature include: selection of contrast agent (non-iodinated, iso-osmolar), volume administration, pharmacologic therapy, hemodialysis and hemodialfiltration, as well as avoidance of co-administration with other potentially nephrotoxic agents.

Despite the above, in 2017, the AMACING trial concluded “no prophylaxis to be non-inferior and cost-saving in preventing contrast-induced nephropathy compared with intravenous hydration according to current clinical practice guidelines.”  There are admittedly several issues with this study. Since then, there have been countless meta-analyses of the data over the years that have also reached the opposite conclusion. There have also been several publications that question the true existence of CIN.

A recent AJKD In Practice by Rudnick et al (freely available until Feb 29, 2020) was commissioned to celebrate the selection of Iodinated Contrast as a finalist in NephMadness 2018. 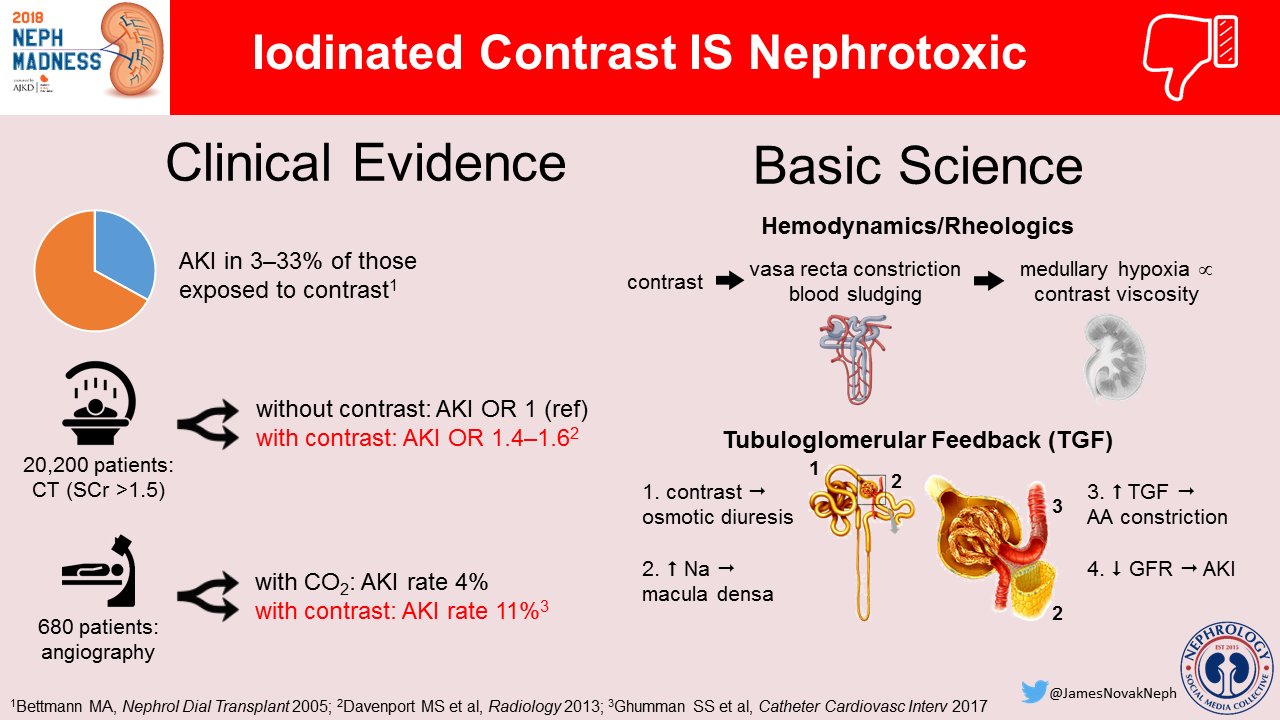 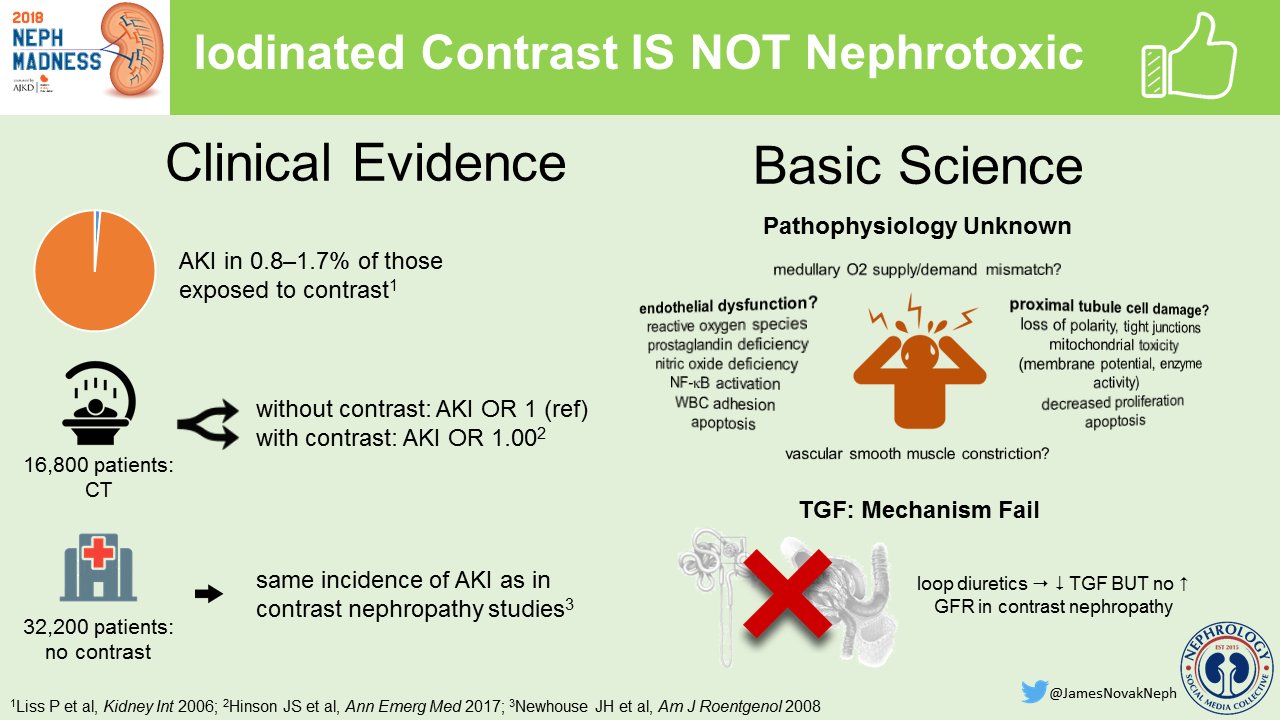 Rudnick et al provide a comprehensive review of the literature highlights the significant heterogeneity of the different studies, and also their strengths and limitations. Considering the imbalance in confounding covariates and selection bias between studied populations, the authors point out that “the ideal approach to determine CIN following intravenous contrast would be a randomized controlled trial (RCT) in patients undergoing computed tomography (CT) with or without contrast media enhancement,” thereby ensuring balanced comorbid conditions between groups and non-biased randomization. For ethical and logistical reasons, it is unlikely that such RCTs will be performed. Recognizing these limitations, several studies using propensity score matching methods are presented in Table 1 below. 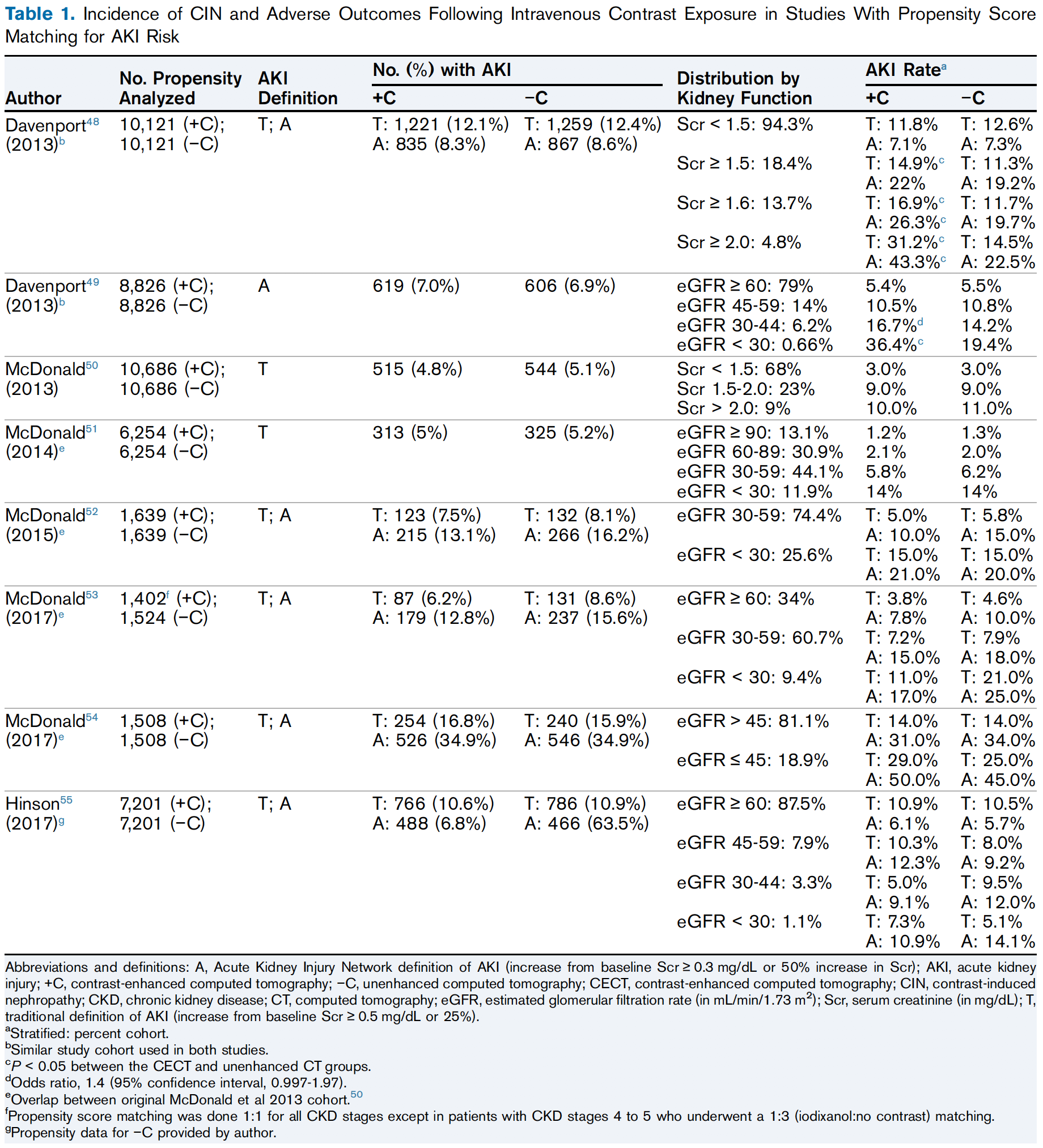 So, does CIN exist? The word “renalism” was coined by Dr Glenn Chertow @gchertow to refer to the failure to perform appropriate diagnostic/therapeutic interventions in patients with CKD due to concern about risk of AKI. Aversion to the risk of contrast nephrotoxicity is inappropriate if the benefit of the exposure far outweighs the minimal risk. 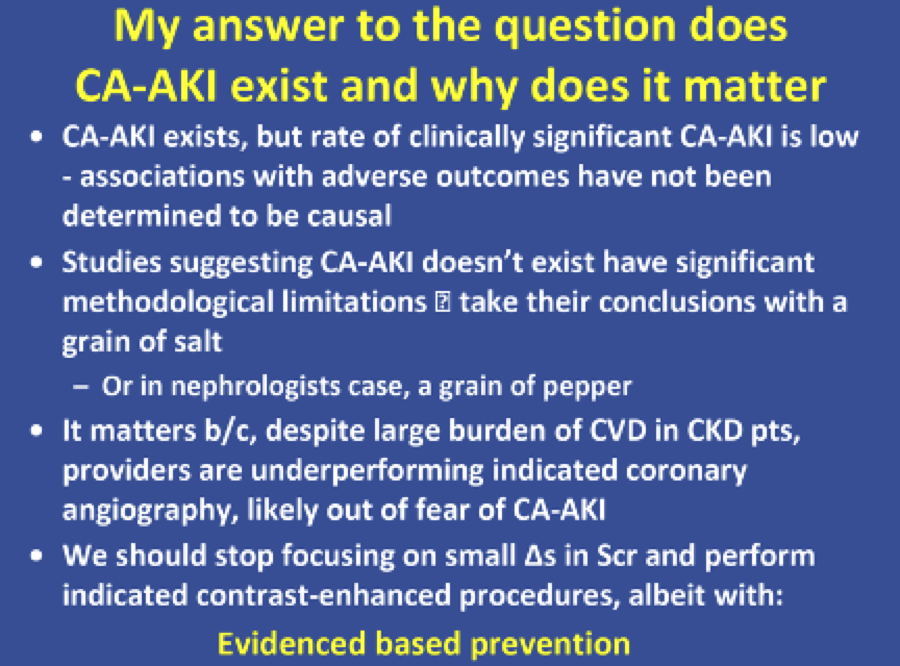 Reproduced with permission from @stevenweisbord