Light chain cast nephropathy (LCCN) is the most common cause of renal failure in multiple myeloma patients. Histologically, it is characterized by intra-luminal casts showing a typical light microscopy appearance and by light chain (LC) restriction by immunofluorescence. The typical LC casts are PAS negative, hypereosinophilic on HE, and polychromatophilic on trichrome. They have a dense appearance and are often sharp edged, with a brittle consistency. In most cases, casts are associated with a cellular reaction that is composed of histocytes, often multinucleated.

In some cases, light chain casts may demonstrate an unusual appearance forming a dense and laminated core with spicules formation at their periphery. These peculiar casts show Congo red positivity with green birefringence upon polarization. These casts are often associated with a more prominent cellular reaction, numerous tubular ruptures and conspicuous interstitial inflammation. The peripheral spicules are reminiscent of those observed on the outer aspect of the basement membrane in some cases of glomerular amyloidosis. By electron microscopy, the examination of the tubules reveals large intra-luminal collections of amyloid fibrils. Intra-cytoplasmic fibrils may also be found in the proximal tubular epithelial cell. Altogether these observations are compatible with intra-tubular amyloidosis. 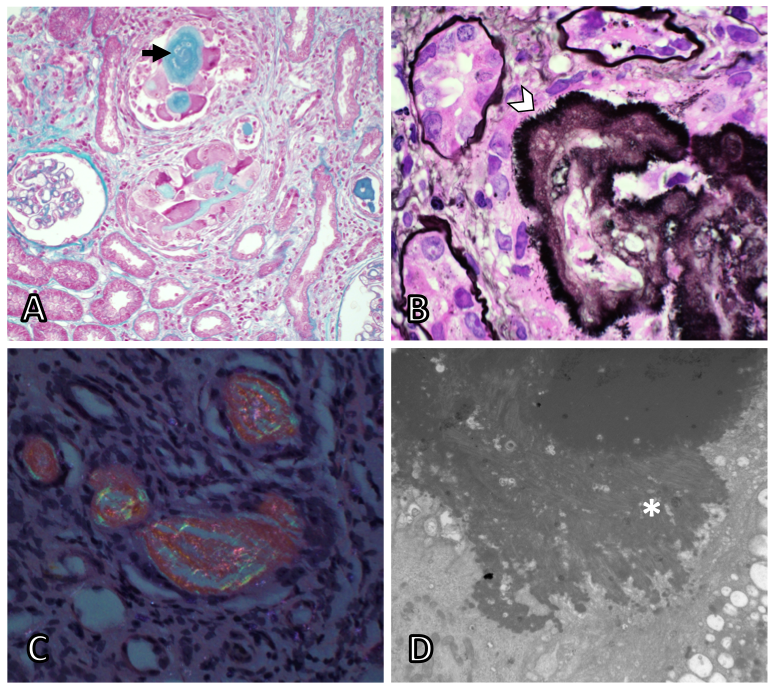 The pathophysiology of intratubular amyloid is unclear and could imply intra-cytoplasmic fibrils formation in the proximal tubular epithelial cells that would be later secreted in the tubular lumens. Additional studies are required to clarify the histological criteria, to uncover the underlying formation mechanisms and to better define their clinical significance.