Editor’s Note: We asked authors of Original Investigations to provide short plain-language summaries that would briefly summarize what inspired their study, the basic approach taken, what was learned, and why it matters. We hope our readers will find this valuable in helping them keep up with the latest research in the field of nephrology. From the March 2021 issue:

From the authors: The number of patients with kidney failure requiring kidney replacement therapy to sustain life is increasing. Peritoneal dialysis (PD) is a form of home-based kidney replacement therapy. This study used data collected from an international survey to evaluate the global use of PD and patterns of treatment delivery. Participants from 160 countries responded. Survey results suggest that PD was not available in 30 countries, especially from Africa and low-income countries. There was high variability in the proportion of incident patients with kidney failure receiving PD, costs borne by patients, PD prescription, and reporting of quality outcome measures. The ﬁndings from this study highlight large inter-and intraregional disparities in the use and adoption of PD.

From the authors: Hemodialysis is the main life-support therapy for patients with kidney disease. This international survey administered by the International Society of Nephrology aimed to examine the epidemiology of patients with kidney failure receiving hemodialysis worldwide, availability of hemodialysis in each country, proportion of patients receiving dialysis at the onset of kidney failure, and funding for hemodialysis. The literature search and survey responses by key stake-holders (nephrologists and policy makers) from 160 countries suggested a wide variation in the use of hemodialysis worldwide, with limited access to hemodialysis mainly in low- and lower-middle–income countries. Similarly, funding for hemodialysis treatment varied substantially, with patients from low- and lower-middle–income countries generally bearing higher out-of-pocket expenses. The survey also noted differences in practice patterns of hemodialysis globally. 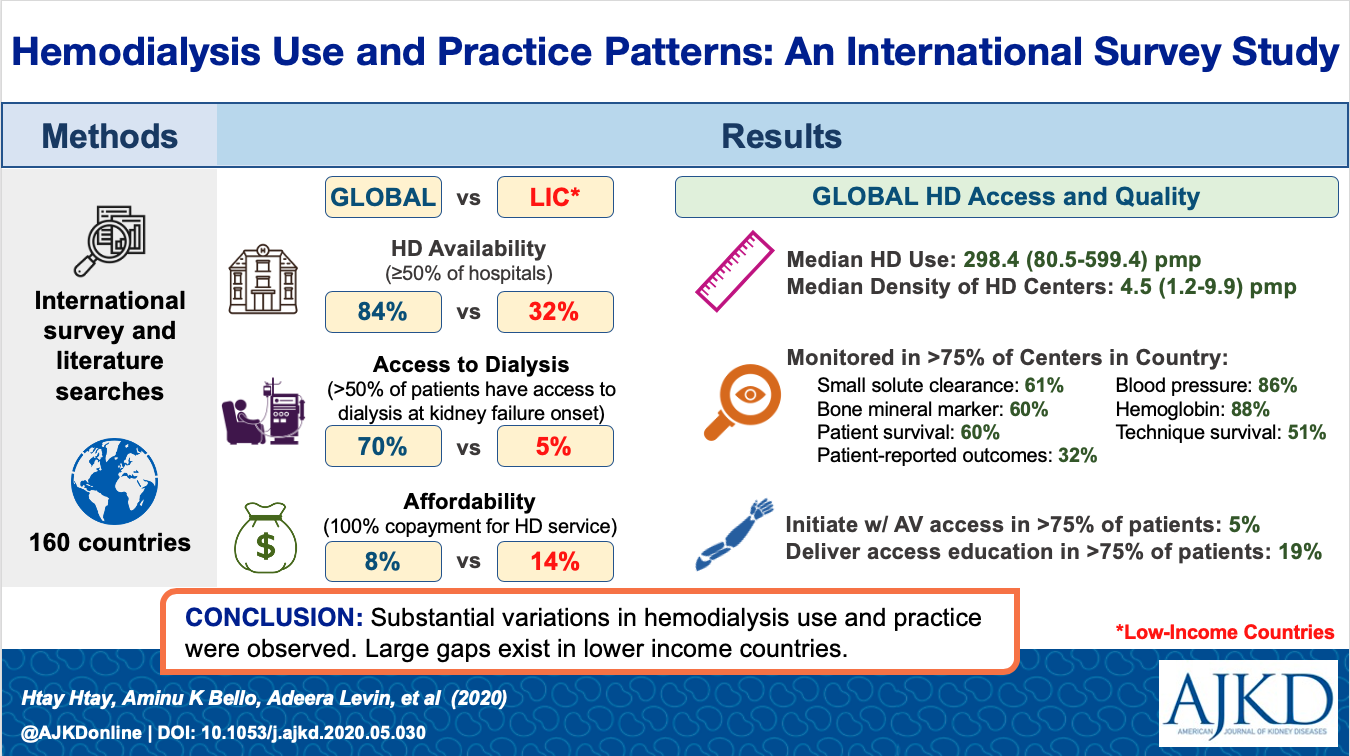 From the authors: Kidney pathology from noncancerous portions of the kidney from patients undergoing nephrectomy can offer insight into the spectrum of kidney histopathologic ﬁndings in humans. We reviewed pathology reports from 1,347 patients who underwent nephrectomy between 1999 and 2018, examining the association between degree of scarring in the glomerulus, tubules/interstitium, and vessels with kidney function at the time of kidney removal. We also looked at the relationship between age and kidney function among each category of scarring. We found that more scarring in the glomerulus, tubules/interstitium, and the vessels was associated with worse kidney function, regardless of age. 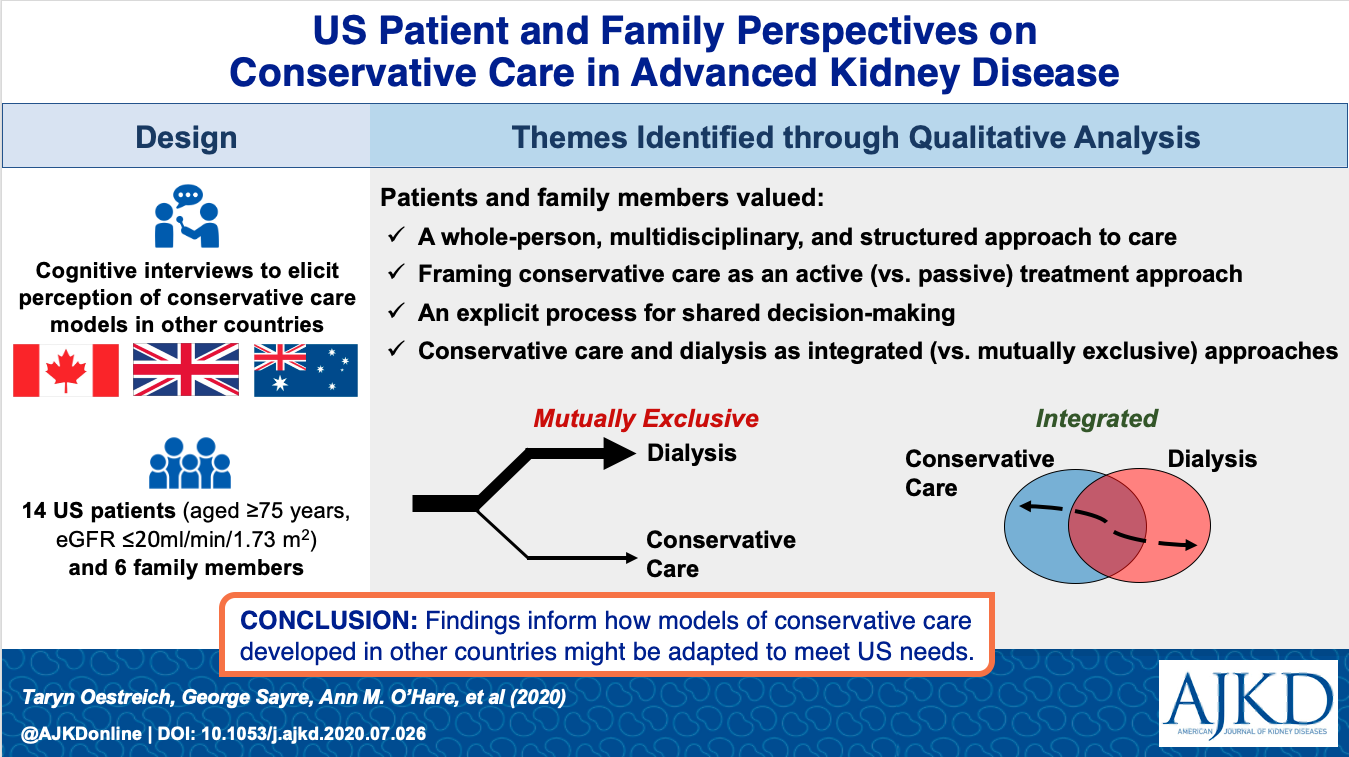 From the authors: People with chronic kidney disease (CKD) often have several comorbid conditions that warrant surgical intervention, and they commonly have poorer post-operative outcomes compared to those without CKD. However, it is not evident how the rate of major surgical procedures varies based on levels of kidney function. In this population-based retrospective cohort of more than 1.4 million adults, we estimated the incidence rates of major surgery from 2010 to 2017 in Alberta, based on preoperative measures of kidney function (estimated glomerular ﬁltration rate [eGFR]). We found that the incidence of surgery was consistently greater with lower eGFRs. People receiving dialysis had the highest incidence, which was not explained by kidney transplantation or dialysis vascular access procedures. This study informs greater understanding of the burden of illness requiring major surgery for people with CKD. 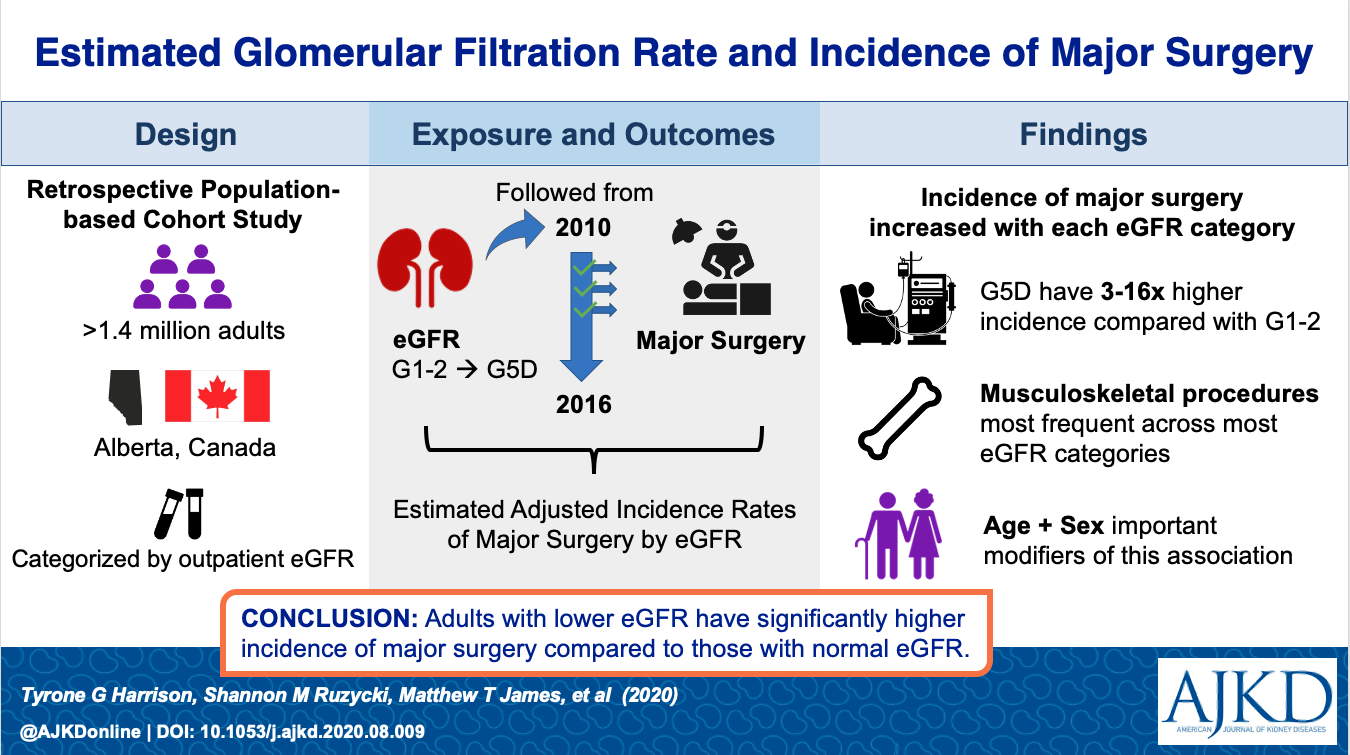 From the authors: Obesity is a targetable risk factor in the prevention of kidney function decline. However, although it is most commonly used, body mass index may not be the best marker of obesity-related risk, and the associations between obesity and kidney function decline may differ across sex and race. In the Atherosclerosis Risk in Communities Study, we evaluated associations between different measures of obesity at baseline and estimated glomerular ﬁltration rate trajectories using mixed models with random intercepts and random slopes and estimated the associations between obesity and kidney failure with replacement therapy (KFRT) using Cox proportional hazards models. Obesity status is a risk factor for future decline in kidney function and development of KFRT in Black and white women, with less consistent associations among men.

From the authors: Data for the association of estimated glomerular ﬁltration rate (eGFR) and albuminuria with cardiovascular complications in older adults are scarce. We studied the associations of these 2 measures with stroke, myocardial infarction, and mortality among a cohort of older adults followed up in Berlin. Furthermore, we analyzed whether eGFR, based on serum creatinine and/or cystatin C level, and albuminuria improve prediction models for these adverse events. We found increased stroke risk for those with eGFR < 60 mL/min/1.73 m2 and increased risk for death among those with albuminuria. Furthermore, cystatin C–based eGFR improved prediction of stroke. These data may help identify those at high risk for cardiovascular events and suggest a beneﬁt of integrating eGFR and urinary albumin-creatinine ratio into future cardiovascular prediction models for older adults. 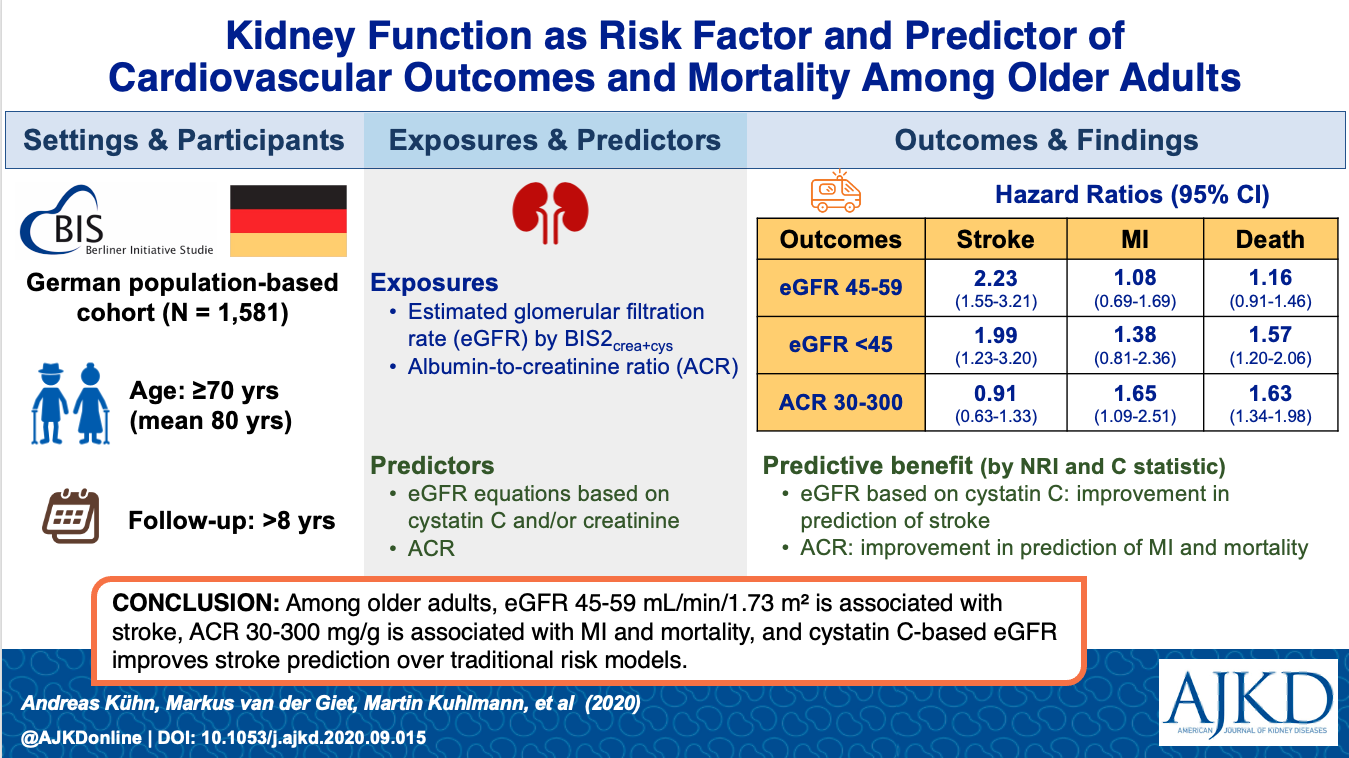 From the authors: Primary cilia are specialized sensory organelles that protrude from the apical surface of most cell types. Mutations in ciliary-associated proteins result in a group of diseases collectively known as ciliopathies. Many of these mutations manifest as renal ciliopathies, including polycystic kidney disease, nephronophthisis, and Bardet-Biedl syndrome. Of the handful of pharmacologic treatments available, none are curative. It is important to determine the molecular mechanisms that underlie the involvement of the primary cilium in cyst initiation, expansion, and progression for the development of novel and efficacious treatments. This review updates research progress in defining key genes and molecules central to ciliogenesis and renal ciliopathies. 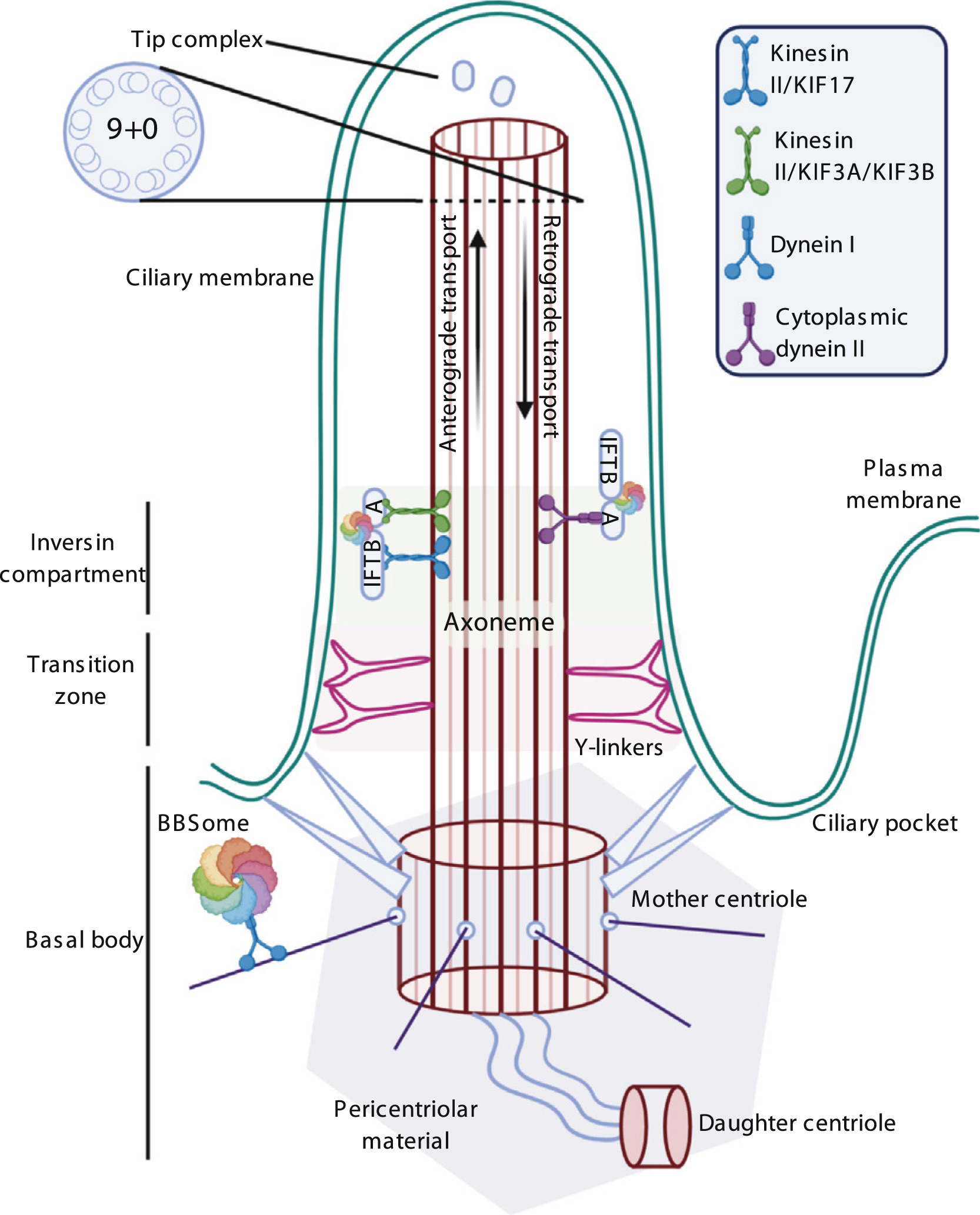 The key structural components of the primary cilium based around the central axoneme. This nonmotile cilium has 9 outer microtubule doublets but no central doublet. Ciliary components, receptors, and signaling proteins are trafficked in anterograde and retrograde directions on the axoneme by intraflagellar transport (IFT) complexes, IFTA and IFTB, which engage dynein II and kinesins (blue box), respectively. The BBSome complex assists traffic at the base of the cilium and then cooperates with IFTs. The cilium grows out of the mother centriole within the basal body and the base of the cilium is segregated from the cytoplasm by the transition zone, defined by the presence of Y-linkers. The primary cilium is erected in quiescent cells and disassembled before cell division. Abbreviation: KIF, Kinesion family members. Created with BioRender.com. Figure 1 from McConnachie et al, AJKD © The Authors

From the authors: In this Core Curriculum, we discuss the typical features of primary and secondary disease; highlight the target antigens such as the phospholipase A2 receptor, thrombospondin type 1 domain-containing 7A, neural epidermal growth factor-like 1, and semaphorin-3B; describe the relationship between the immunologic and clinical courses of disease; and review modern management with supportive care or immunosuppressive treatment based on these composite parameters. 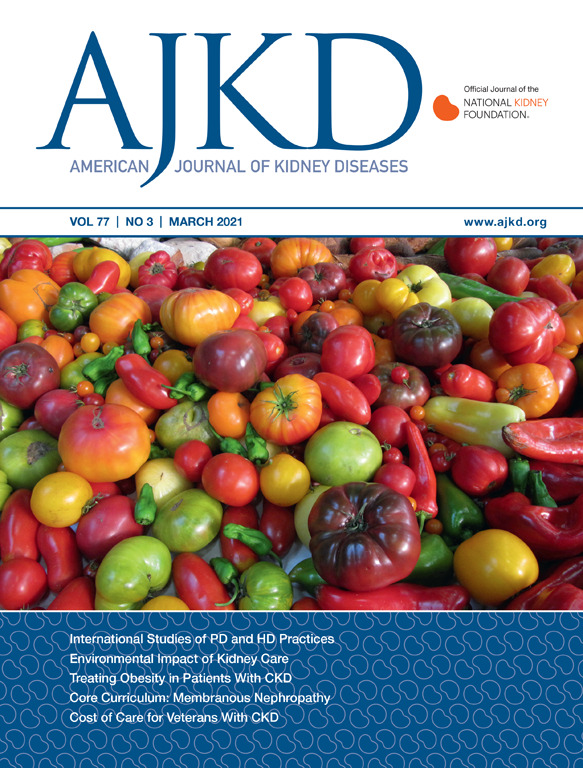 On the Cover: More than two-thirds of adults and nearly one-third of children in the United States are overweight or obese, leading them to experience abroad array of increased health risks. Current dietary guidelines recommend balance across vegetables, fruits, grains, dairy, proteins, and oils while controlling caloric and saturated fat intake. To accomplish this, the Centers for Disease Control and Prevention advocates that plates have a rainbow of colors to promote health. Adhering to these guidelines depends on the availability of fresh produce like that depicted in the colorful array of tomatoes and peppers on this month’s cover. Public health expert shave linked in accessibility of such foods to unhealthy eating habits and obesity. The relationship of obesity to kidney disease is addressed in 2 articles in this month’s issue of AJKD. Yu et al explore the association between midlife obesity and kidney function trajectories, while Chintam and Chang review strategies to treat obesity in patients with CKD.

The photograph “Tons of Tomatoes (and Peppers)” is by Cody and Maureen on Flickr, released under the CC BY 2.0 license. 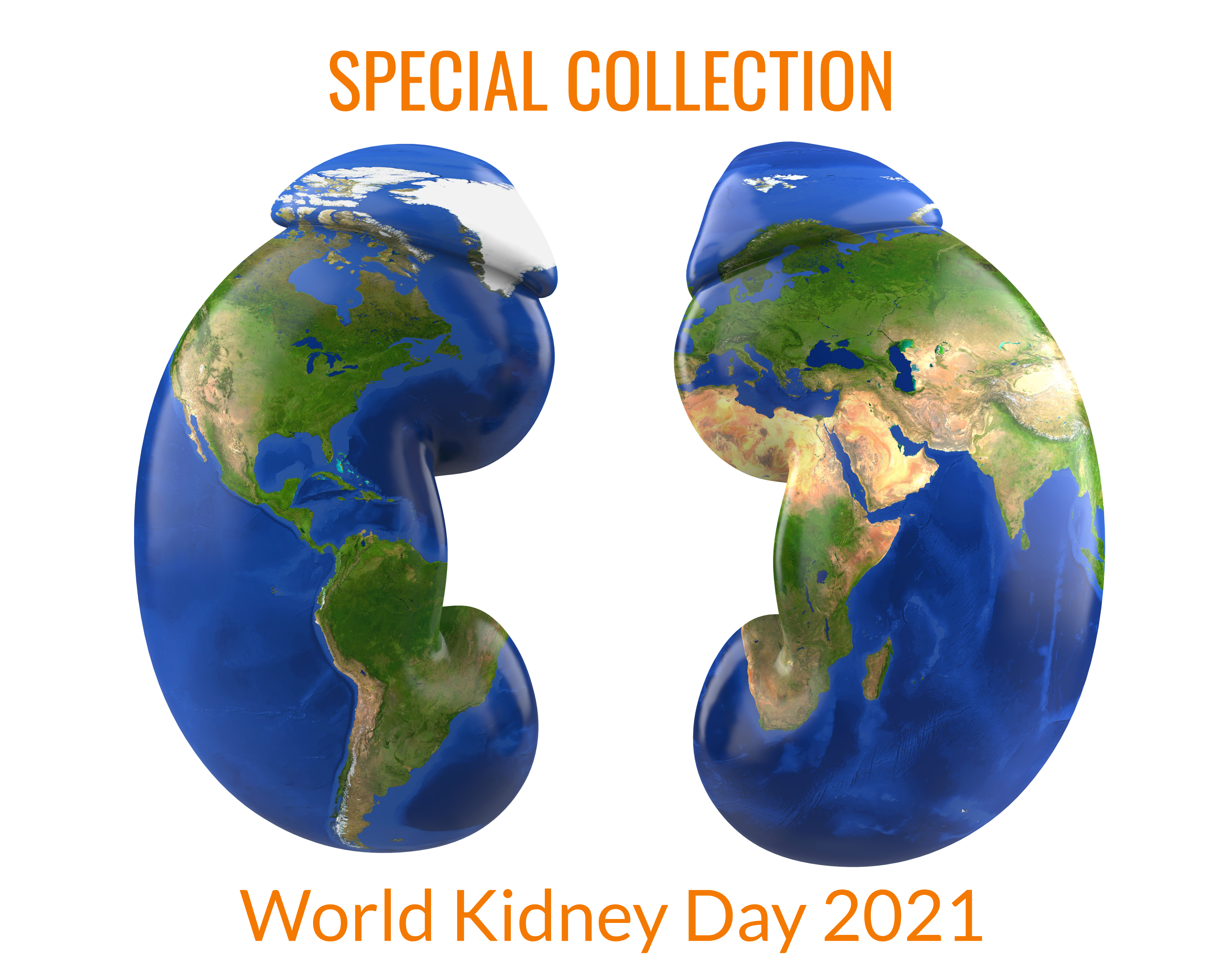 In celebration of World Kidney Day on March 11, AJKD presents this special collection of recent publications from around the world addressing a variety of important aspects of kidney disease research. All articles are freely available until May 17, 2021.