Focal segmental glomerulosclerosis (FSGS) is a histologic description with numerous etiologies and proposed pathogenic mechanisms. Proteinuria, frequently associated with nephrotic syndrome, is a central clinical feature of FSGS. There is an increased need for clinical trials in this area, and first-line therapeutic interventions frequently fail. A study published in AJKD in 2004 analyzed the 21-year trend in end stage kidney disease (ESKD) due to FSGS and found a 13-fold increase in FSGS incidence compared to a 2-fold increase in incidence of all other glomerular diseases. Injury to the podocyte by several different mechanisms is thought to cause proteinuria in FSGS, which leads to a progressive decline in glomerular filtration rate (GFR). Additionally, there is substantial clinical evidence that lowering proteinuria delays disease progression.

The recent study published in AJKD from Troost et al uses data from the FSGS Clinical Trial (FSGS-CT) to determine if reduction in proteinuria as a continuous variable has a beneficial impact on GFR slope in the long-term. We know that achieving complete or partial remission in primary FSGS is associated with improved kidney survival. However, these categorical definitions seem too restrictive and do not consider long-term kidney survival in patients who have a reduction in proteinuria but do not meet these criteria. A consequence of this is loss of statistical power in studies of a rare disease such as FSGS. This study discusses meaningful endpoints and considers the use of proteinuria reduction as a continuous variable as a predictor of long-term kidney function in patients with FSGS. 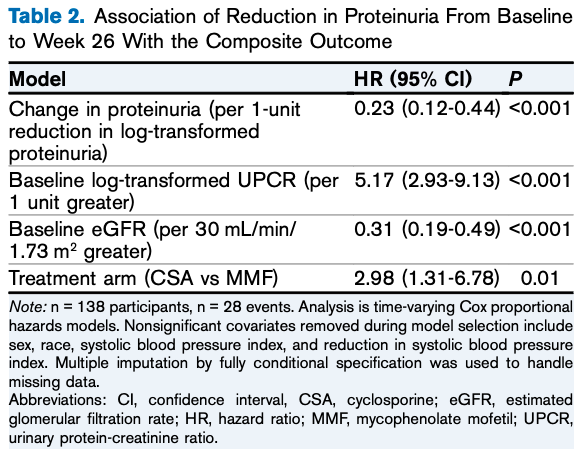 The FSGS-CT was a multicenter randomized clinical trial of steroid-resistant primary FSGS in children and adults. Participants had biopsy proven FSGS, proteinuria onset between 2 and 40 years, estimated GFR (eGFR) >40 ml/min/1.73m², UPCR > 1g/g and steroid resistance (defined as persistent proteinuria after being treated with steroids for a minimum of 4 weeks). This randomized trial compared the effect of cyclosporine against mycophenolate mofetil with dexamethasone on reducing proteinuria over 26 weeks. In addition, all the participants were on the maximum tolerated dose of ACE/ARB. There was no difference in the efficacy of either regimen on proteinuria.

The authors used the data from FSGS-CT trial to understand the relationship between eGFR slope and changes in proteinuria. Of the 192 participants enrolled, 138 were assigned treatment. Two-thirds were children (<18 years), and 38% identified as Black/African American race. Median UPCR at baseline was 4 g/g. As the original study ended at 26 weeks, the primary analysis included linear mixed-effects models that included time and participant to estimate GFR slope post 26 weeks. Models were adjusted for age, sex, race, APOL1 genotype, baseline UPCR, baseline eGFR, treatment arm, and systolic blood pressure. The analysis was repeated after adjusting for complete remission at 26 weeks (defined as UPCR <0.3 g/g), adding further support for UPCR reduction as a beneficial predictor. As many participants were children, the same GFR equation (CKiD formula or CKD-Epi) was used through follow up for consistency. Models of eGFR slope and time to the composite outcome were tested for effect modification using interaction terms for age, sex, race (Black vs non-Black), APOL1 genotype (2 vs 0-1 allele), baseline UPCR, baseline eGFR, treatment arm (cyclosporine vs mycophenolate mofetil), and hypertension at baseline. All models were unadjusted, as sample sizes were small.

In the cohort, median reduction in proteinuria was 67% with a median absolute change in proteinuria of 2.3 g/g.  Complete remission was achieved by 21%, and 49% reached either complete or partial remission.  Adjusted linear mixed-effects models demonstrated incremental attenuation in the annual GFR slope with increasing percentage decile of proteinuria reduction. 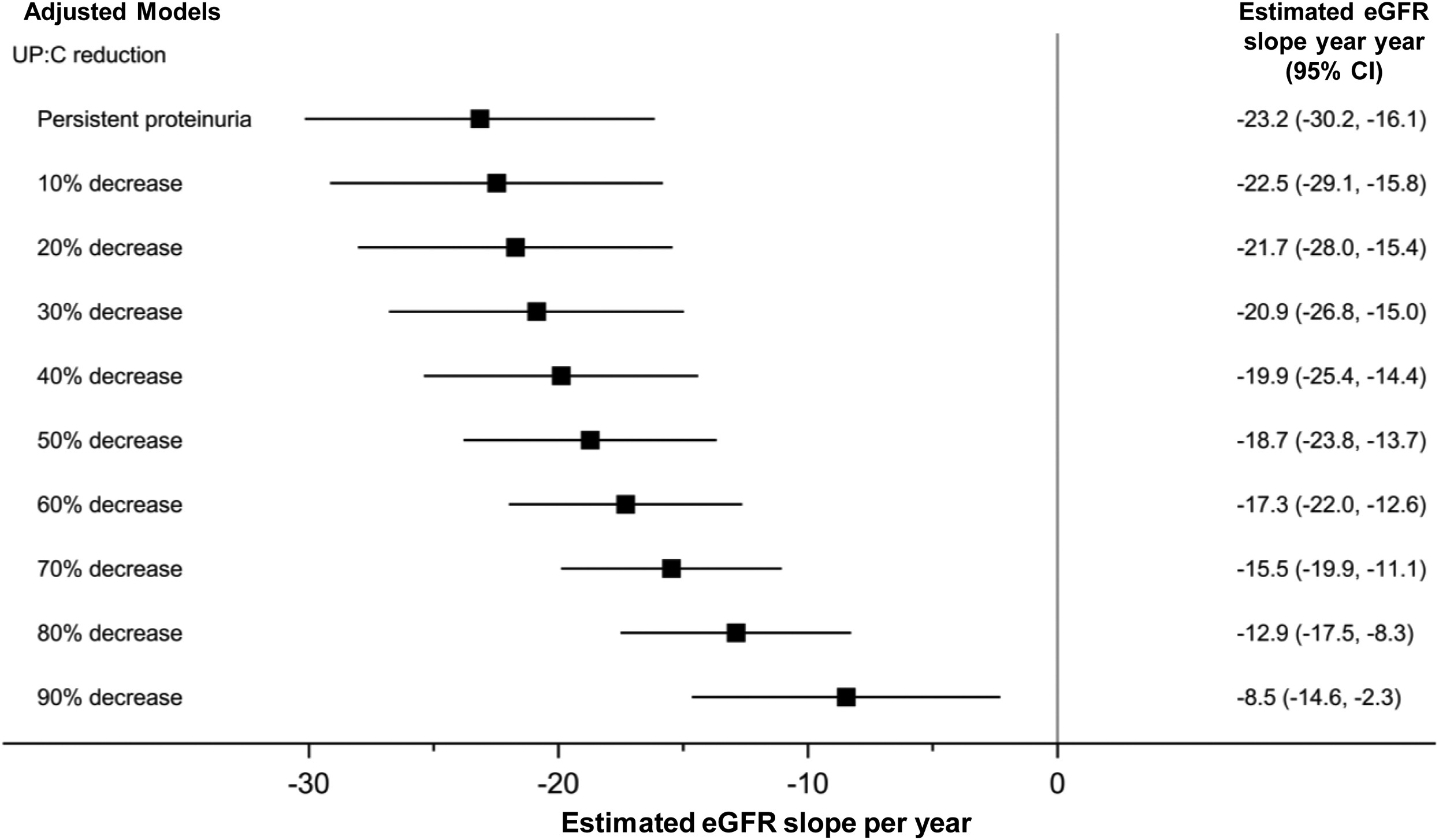 Improved kidney survival has been shown in Primary FSGS patients who have attained remission of proteinuria. Until now, clinical trials relied on strict and arbitrary categorical outcomes (complete remission, partial remission, no response). This analysis shows that even incremental reductions in proteinuria showed meaningful differences in the eGFR slope (20%-30% reduction showed improvement in eGFR by 1-2ml/min/1.73m²). Complete remission in FSGS will still remain the goal for FSGS but this study demonstrates that patients can still benefit from proteinuria reduction that does not reach traditional PR and CR definitions, which could result in years of preserved native kidney function. Most importantly, this study adds evidence for the use of proteinuria as a valid surrogate endpoint in clinical trials in FSGS. Hopefully this translates to novel trials to assess the efficacy of treatments for FSGS.

1 Comment on Primary FSGS: Using Proteinuria as an Endpoint