Editor’s Note: We asked authors of Original Investigations to provide short plain-language summaries that would briefly summarize what inspired their study, the basic approach taken, what was learned, and why it matters. We hope our readers will find this valuable in helping them keep up with the latest research in the field of nephrology. From the July 2021 issue:

From the authors: We designed a multicenter, prospective, randomized, open-label, blinded end point, controlled trial to investigate the efﬁcacy and safety of drug-coated balloon (DCB) angioplasty in the treatment of dysfunctional ﬁstulas due to potential stenosis. A total of 161 participants were recruited and allocated to 1 of 2 groups at a 1:1 ratio. Initial dilation was performed following DCB angioplasty in the intervention group, whereas plain high-pressure balloon angioplasty was performed in the control group. At 6 months post-procedure, the incidence of restenosis detected by ultrasonography was signiﬁcantly less than that in the control group. The intervention-free survival of the target lesion and target access circuit did not reach statistical signiﬁcance between the 2 groups at 6 months but did so at 12 months, without DCB-related adverse effects in the trial group. A larger population and longer follow-up are needed in future studies. 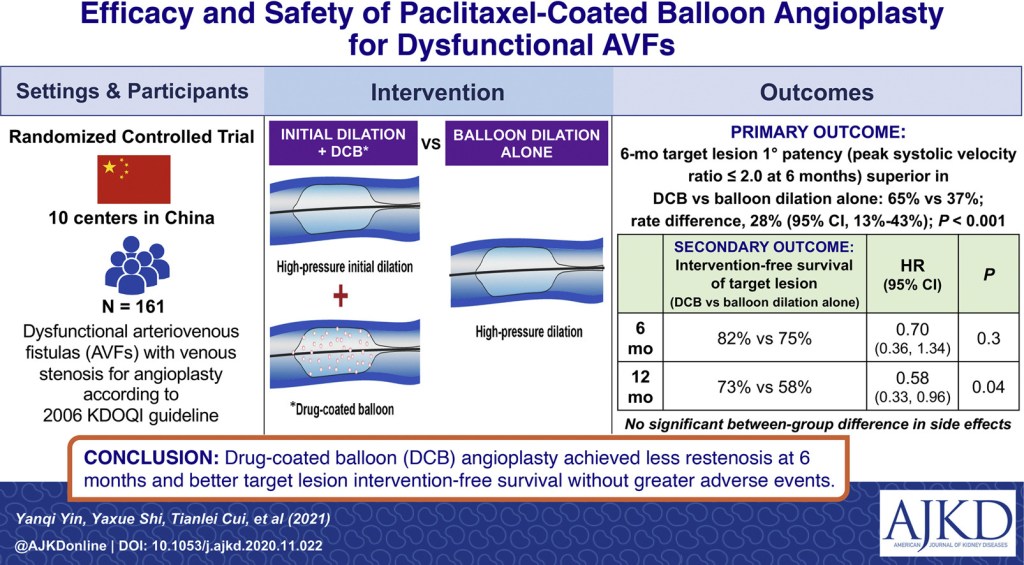 From the authors: Despite frequent poor outcomes, there is limited evidence to guide the way in which we prioritize care after acute kidney injury (AKI). This study validates 2 clinical risk models for outcomes in hospital survivors and AKI survivors. We used decision curve analysis to compare which decision strategies provide more beneﬁt than harm. We found that risk models predicting death or readmission and chronic kidney disease have the potential to assist follow-up decisions after AKI and could be superior to alternative strategies such as prioritizing AKI severity or kidney recovery alone. We also found that many patients currently receive little or no postdischarge monitoring after AKI. This indicates possible opportunities for the implementation of decision support to guide postdischarge care for people hospitalized with AKI.

Editorial: We Won’t Get Fooled Again: Finding the Who to Follow After Acute Kidney Injury by Javier A. Neyra and Samuel A. Silver et al [FREE]

Effect of Bicarbonate on Net Acid Excretion, Blood Pressure, and Metabolism in Patients With and Without CKD: The Acid Base Compensation in CKD Study by Crystal C. Tyson et al

From the authors: Screening for chronic kidney disease (CKD) is recommended for patients with hypertension or diabetes, or both. However, CKD prevalence varies across area-level socioeconomic status (SES). We evaluated the effect of additionally screening patients who lived in low-SES census tracts. We found that adding area SES improved sensitivity by 7 percentage points and decreased speciﬁcity by 11 percentage points, whereas the number needed to screen to detect 1 case of CKD increased from 4 to 5. A major limitation of this study was the selection bias. Screening patients from low-SES neighborhoods may modestly facilitate early detection of CKD. 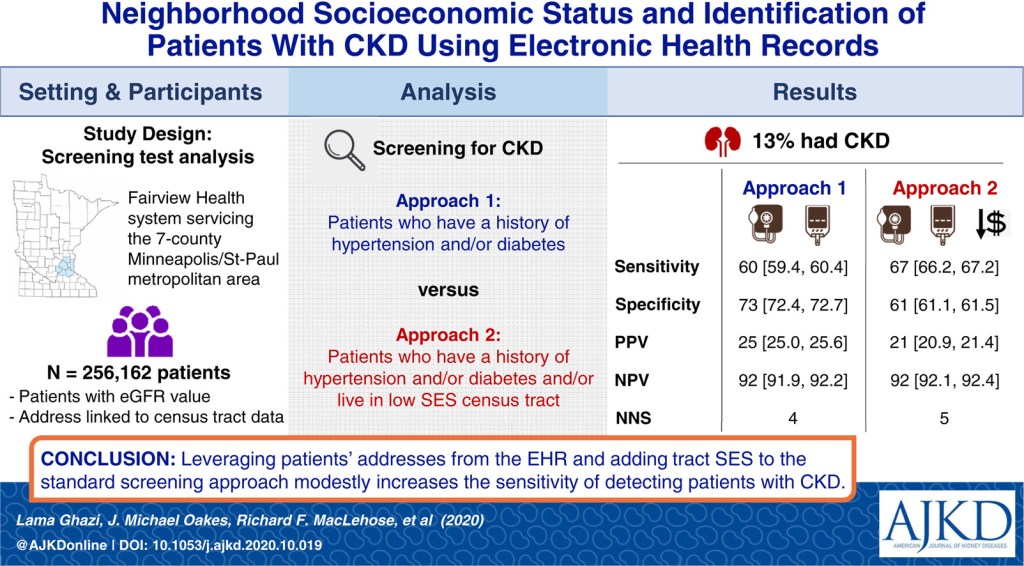 From the authors: Inﬂammation is central to the pathogenesis of many kidney diseases. Recent research suggests that bio-markers of immune activation (eg, the tumor necrosis factor [TNF] pathway) are associated with worse kidney outcomes. Most of these studies, however, comprised patients with diabetes, and African Americans were underrepresented. In this analysis of AASK, a cohort of African Americans with hypertension-attributed chronic kidney disease and no diabetes, higher baseline serum levels of soluble TNF receptors 1 and 2 and TNF-α were associated with greater risk of incident kidney failure with replacement therapy (KFRT) whereas interferon γ was not. None of the biomarkers modiﬁed risk of KFRT associated with APOL1, a genetic risk factor for kidney disease. These ﬁndings provide support for the importance of the TNF pathway in kidney disease progression among African Americans, regardless of APOL1 risk status. 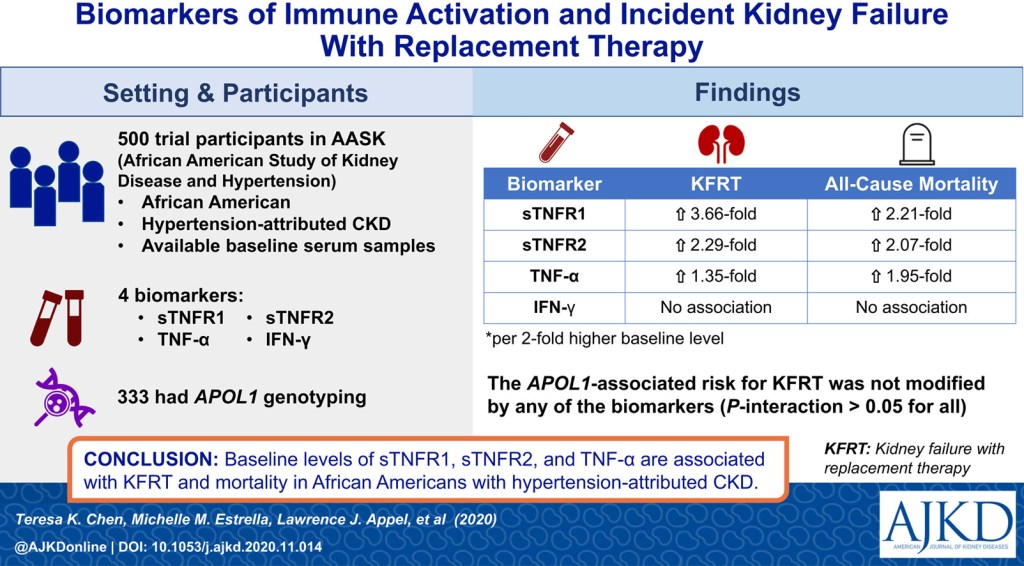 From the authors: Dietary management is a central component of care for people receiving hemodialysis. Mobile phone text messaging is widely used in the population and offers a potential avenue to enhance current nutritional care. KIDNEYTEXT was a 6-month randomized controlled study that evaluated the feasibility and acceptability of text messages to alter dietary behaviors. This interven-tion was feasible and acceptable. It showed promise at improving dietary parameters and may impact other clinically important outcomes such as ﬂuid manage-ment. Larger trials are needed to evaluate the effec-tiveness of this intervention. 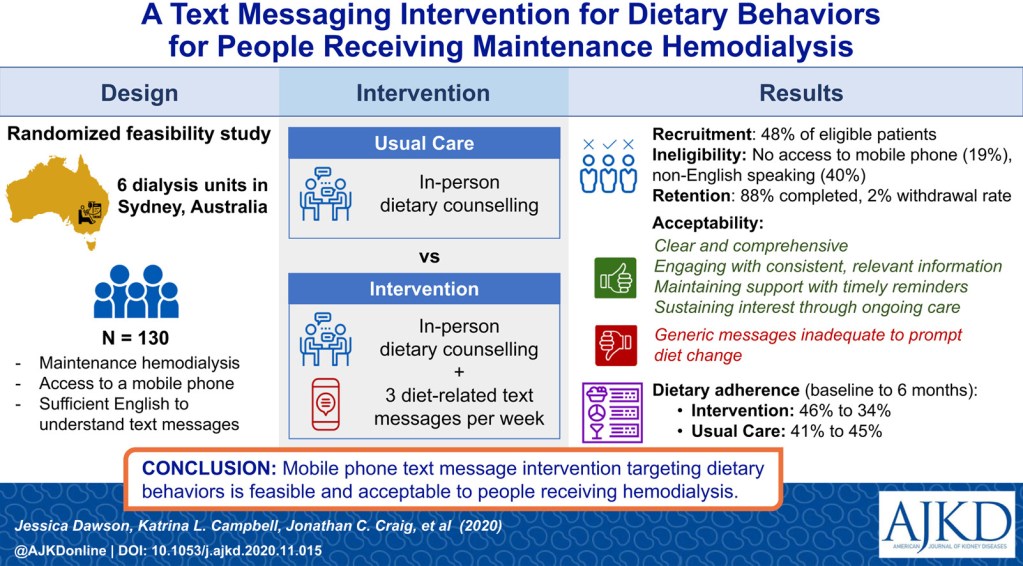 Special Report from the July 2021 Issue:

Reassessing the Inclusion of Race in Diagnosing Kidney Diseases: An Interim Report From the NKF-ASN Task Force by Cynthia Delgado et al [FREE]

From the authors: For almost 2 decades, equations that use serum creatinine, age, sex, and race to estimate glomerular filtration rate (GFR) have included “race” as Black or non-Black. Given considerable evidence of disparities in health and health care delivery in African American communities, some regard keeping a race term in GFR equations as a practice that differentially influences access to care and kidney transplantation. Others assert that race captures important non-GFR determinants of serum creatinine and its removal from the calculation may perpetuate other disparities. The National Kidney Foundation (NKF) and American Society of Nephrology (ASN) established a task force in 2020 to reassess the inclusion of race in the estimation of GFR in the United States and its implications for diagnosis and subsequent management of patients with, or at risk for, kidney diseases. This interim report details the process, initial assessment of evidence, and values defined regarding the use of race to estimate GFR. Building on evidence and values, the attributes of alternative approaches to estimate GFR will be evaluated in the next phases and recommendations will be made.

Editorial: Race and the Estimation of GFR: Getting It Right by Harold I. Feldman and Josephine P. Briggs [FREE] 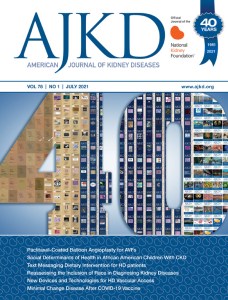 On the Cover: In July 1981, the American Journal of Kidney Diseases published its first issue. Now, 77 volumes, 897 issues, and 12,120 articles later, the journal begins celebrating its 40th anniversary. Originally conceived as the “beige journal” by founding Editor-in-Chief George Porter, the muted cover belied the vibrancy of the community of nephrologists who contributed to the early success of the publication. The community of authors, readers, reviewers, and editors expanded in past decades under the leadership of Robert G. Luke, Saulo Klahr, Neil A. Kurtzman, Bertram L. Kasiske, and Andrew S. Levey. An editorial in this issue of AJKD shares current Editor-in-Chief Harold I. Feldman and colleagues’ reflections on the journal’s early years and previews its course ahead. 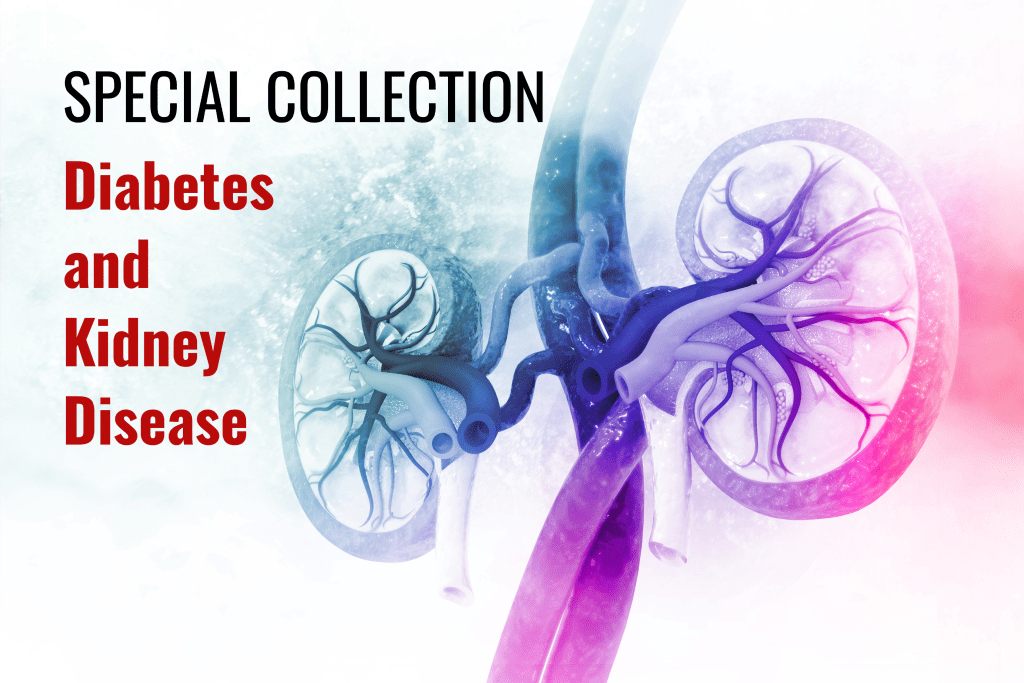 With diabetes mellitus being a leading cause of kidney failure and earlier stages of CKD throughout much of the world, understanding how diabetes affects the kidneys and exploring new treatment options is of critical importance. The last few years have brought new treatments to the clinical arena, in particular, SGLT-2 inhibitors, the focus of several publications assembled in this special collection on Diabetes and Kidney Disease (FREE until July 31, 2021).