Atrial fibrillation (AF) is the most common arrhythmia in patients with chronic kidney disease (CKD), with a prevalence of nearly 24.5%.  This is over 2 times higher than that of the general adult population aged 65 and older. In fact, those with advanced CKD (stage IV-V) have a prevalence of atrial fibrillation that is 7% higher  when compared to those with GFR > 60 ml/min. This demonstrates that there is a stepwise increase in risk for AF associated with advancing CKD. This increased risk is rooted in three main mechanisms: structural remodeling, inflammatory changes and sympathetic hyperactivation.

The pathophysiology of CKD contributes to the increased risk of developing atrial fibrillation. Specifically, overactivation of the renin-angiotensin-aldosterone system induces apoptosis and reactive interstitial fibrosis of cardiac myocytes via angiotensin II. This contributes to structural remodeling of the heart, which increases the risk for atrial fibrillation. Another potential mechanism is the elevation of inflammatory markers, which lead to decreased cytokine clearance and reduced antioxidant levels. In fact, the REGARDS study showed a statistically significant relationship between elevated C reactive protein level, AF risk, and patients in CKD stage III-IV.  In addition to producing these risk factors for atrial fibrillation, CKD contributes to thrombus formation through various mechanisms. 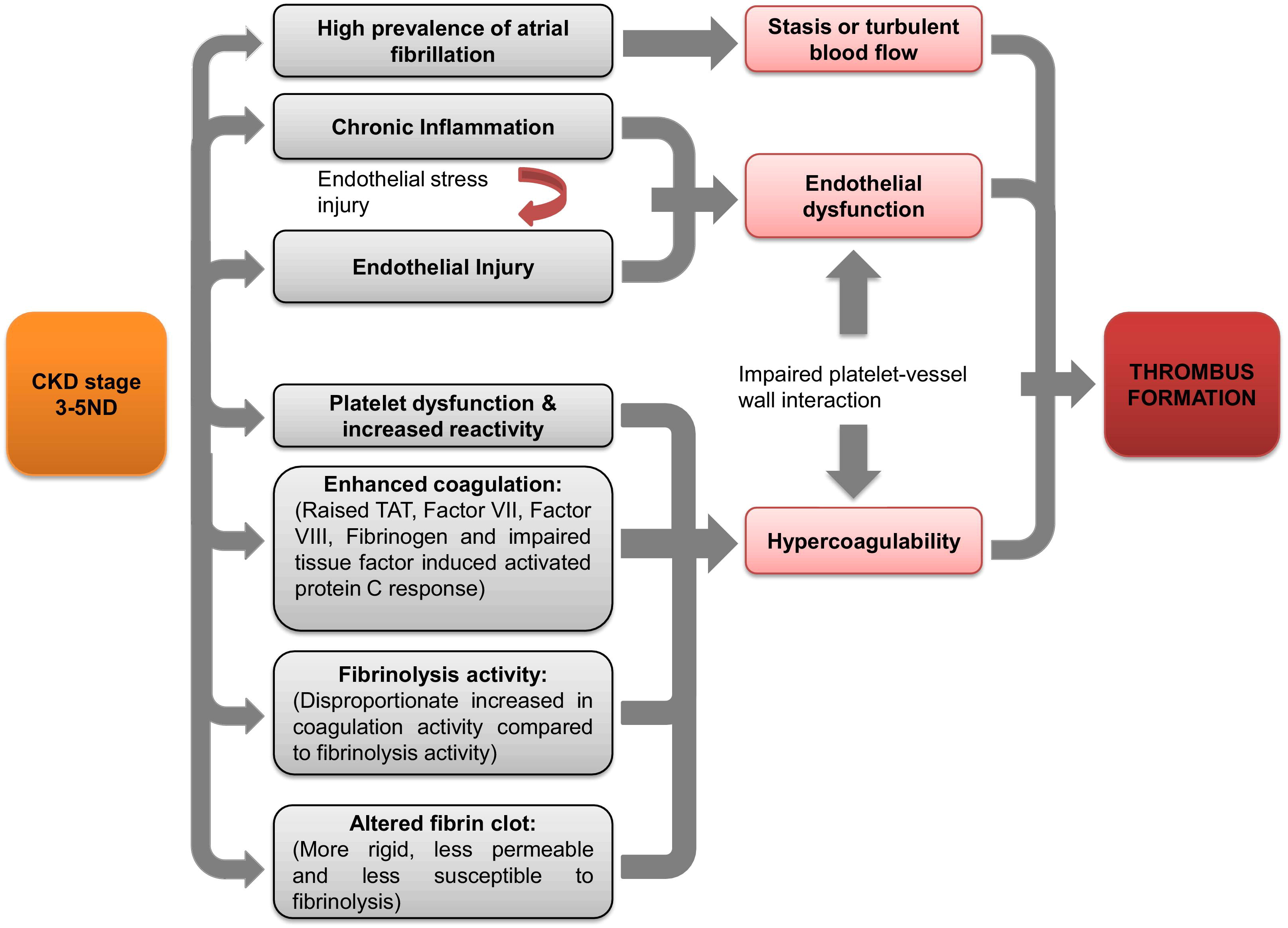 Due to the pro-thrombotic contributions of both, anticoagulation is an important part of treatment for patients with AF secondary to CKD. Historically, warfarin has been used for CKD patients. However, with the arrival of direct oral anticoagulants (DOACs) in the 2000s, there has been more research about their safety and efficacy in patients with AF (dabigatran: RE‐LY, rivaroxaban: ROCKET‐AF, apixaban: ARISTOTLE, edoxaban: ENGAGE‐AF TIMI 48). However, applying these results to a CKD IV-V population is limited since the studies did not include participants with a creatinine clearance under 30 mg/dl. 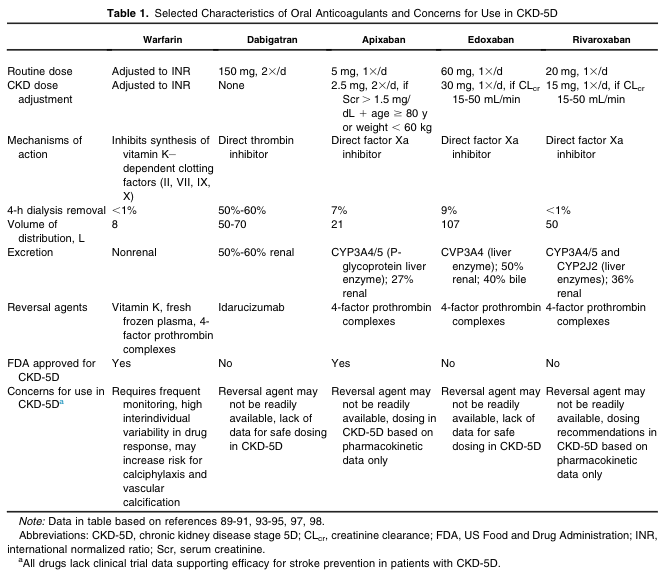 In a recent AJKD paper by Wetmore et al, the authors compared the CKD progression of patients taking warfarin versus apixaban. This is a retrospective cohort study of over 12,000 Medicare recipients with CKD stage III-V and incident AF who were prescribed warfarin or apixaban between 2013 and 2017. Unsurprisingly, the use of apixaban increased over time, from 9.3% of patients in the cohort in 2013 up to 70.2% in 2017. Patients were sampled from the Center’s for Medicare & Medicaid Services database and classified into several categories—if they were new users of the medications who had CKD, no valvular disease, and no incident kidney failure. Patient outcomes included time to CKD stage progression or time to kidney failure. Data was obtained using diagnosis codes to track the progression of their disease.

Historically, despite having a narrow therapeutic index (thereby requiring close monitoring), warfarin is considered relatively safe to use in patients with all CKD stages, per AHA/ACC guidelines. It has also been associated with vascular calcifications and a serious condition called warfarin related nephropathy (WRN), which is defined as a serum creatinine increase of >0.3 mg/dL within 7 days of INR >3 and glomerular hemorrhage. In comparison, apixaban requires less monitoring and has less drug interactions. In another study published recently in Annals of Internal Medicine  Kim et al. showed that direct-acting oral anticoagulants (DOACs) were associated with less adverse outcomes for patients. However, this was not in a CKD exclusive population. Furthermore, apixaban is more expensive and can lead to a DOAC-related nephropathy in advanced CKD as well.

It is important to note that this observational study has limitations. This study doesn’t include a population representing patients under 65 years old due to its design. Additionally, it is based on a population with a low fraction of CKD stage IV and V patients on apixaban. This could have potentially confounded results since those with more advanced CKD may have progressed faster, leading to a correlation—not a causation—between warfarin use and progression of CKD.  Since both causation and correlation are types of association, this trial shows that warfarin prescription and progression of CKD are associated variables.  However, in order to make the conclusion that warfarin prescription causes CKD progression, a matched trial between apixaban and warfarin could help establish a causality.

Although clinical trials would provide clarity to the question posed in this study, it is also important to note that studies such as this pave the way for clinicians to provide patients with alternatives to warfarin. Especially in an older population with unique challenges related to polypharmacy and limited mobility, apixaban offers a patient-centered pharmacologic treatment for those with AF and CKD. 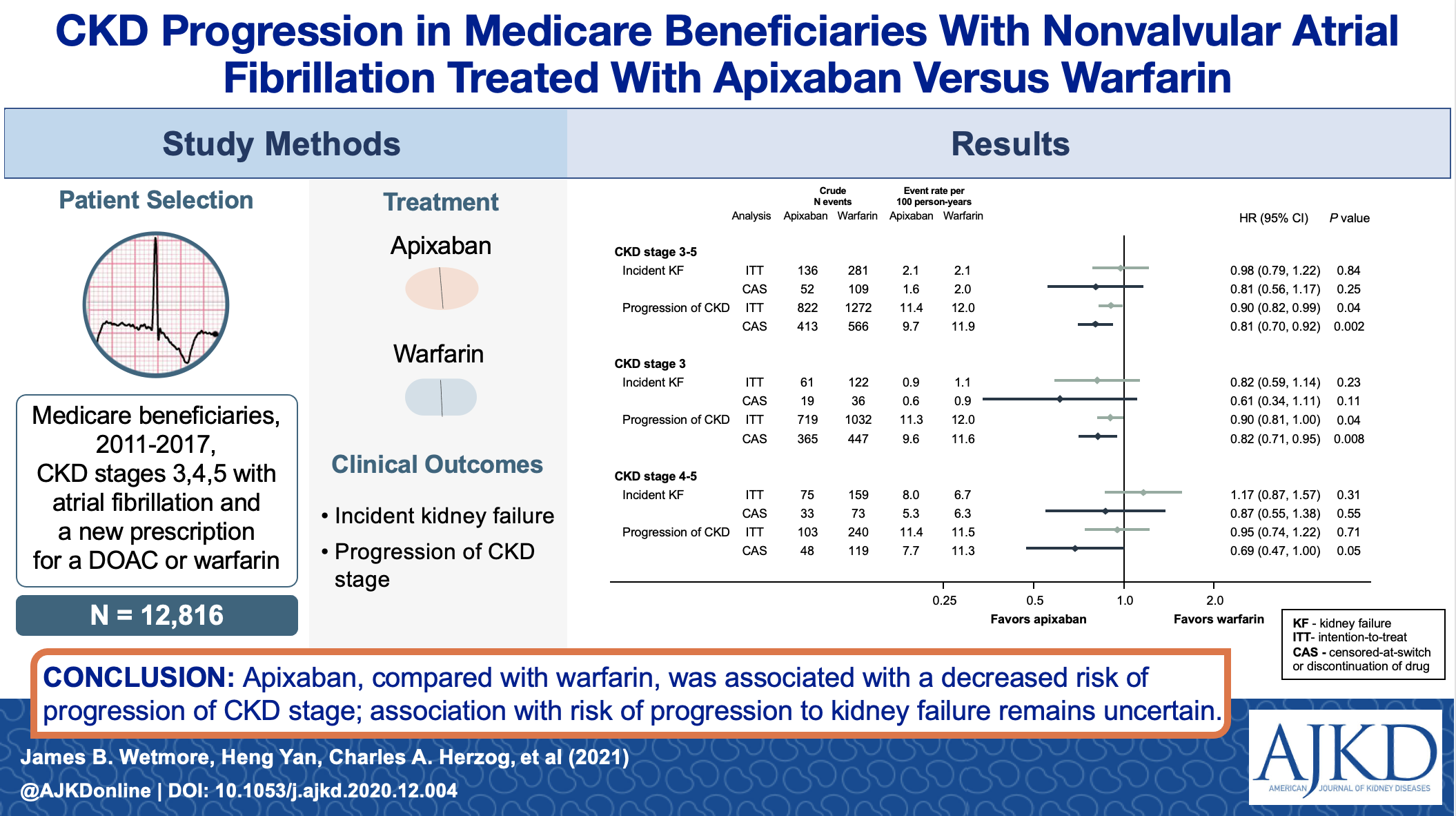