This is a 2 part blog post by #NephJC cofounder, hypertension guru and longtime AJKD contributor Swapnil Hiremath. In Part 1, he outlines the quandaries of blood pressure management in hemodialysis, the paucity and quality of data we have, and the rationale for measuring blood pressure at home.  In Part 2, he dives into a recent AJKD article by Miskulin et al that examines this issue, reviews the findings, and sees what questions remain unanswered.

We can claim the kidney is at the centre of blood pressure (BP) regulation, but BP on dialysis—especially hemodialysis—is one of the largest evidence-free zones in nephrology. With every treatment come numerous BP readings, but do we really know what to do with that information? Our ignorance covers a range of aspects:

While there are some small trials addressing these questions, for the vast majority, we really do not have any good data to guide what we are doing. Observational data can only go so far. Let’s examine a few pitfalls and some new data.

What should be the target BP?

One of the major studies on this topic came over 2 decades ago. Using data from 5,433 HD patients dialyzed in freestanding units operated by Dialysis Clinic, Inc. (DCI), Zager et al clearly demonstrated a U-shaped curve of BP and mortality. The striking aspect was that the nadir of the U associated with lowest mortality was not 120-140, but 120-180! And the mortality was much worse at the lower end than at the higher end. So, if BP is 170, you should chill, and not do anything, right? Not so fast. Observational data can only go so far. 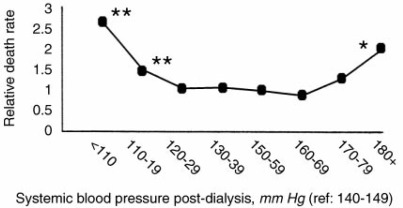 One of the many problems with taking findings like these at face value is that this kind of a curve is also seen in the general population, but should not be used to make treatment decisions. Consider which patients have really low BPs—typically those with heart failure, infections, sepsis or cancer. That these patients would have a higher mortality has usually nothing to do with their BP target. This kind of “reverse epidemiology” has been described for many other exposures for the dialysis population.

Volume or Drugs? Which Drugs?

One can argue that volume is the key determinant of BP, especially in patients with kidney failure. The Dry-weight reduction in hypertensive hemodialysis patients (DRIP) trial did demonstrate lower BP from greater ultrafiltration, but with more adverse effects such as cramps and vascular access thrombosis.  One can also achieve better volume control with changing time and frequency of dialysis, and unsurprisingly data from patients on longer and more frequent dialysis report better BP.  On the other hand, these trials have not shown a mortality benefit, and more frequent dialysis has been associated with loss of residual kidney function.  Problems with trying to set a limit on ultrafiltration rates have been discussed in AJKD by Kramer et al, as well as here on the blog.

What about drugs?  Interestingly enough, beta-blockers have been relegated to the second or third line in the general population for lowering BP.  However, in hemodialysis, two of the very few positive RCTs in this area were conducted with beta-blockers, one with carvedilol and the other with atenolol. Both trials are imperfect, but that is the kind of data we are looking at. Our beloved renin-angiotensin system inhibitors have failed to impress so far; mineralocorticoid antagonists look promising, with two large ongoing RCTs (ACHIEVE and ALCHEMIST—also see NephTrials blog).

Problems with measuring BP during dialysis

Proper BP measurement requires the patient to be sitting upright, with the back supported, feet flat on the floor, quietly for a few minutes before BP is measured.  The dialysis unit with alarms, televisions, and lots of ambient noise, is the exact opposite of a quiet and restful environment.  There is a time crunch to finishing dialysis fast, as well as other factors such as the impending fistula needling, and discussion with the nephrologist about intradialytic weight gain that are likely to result in an elevated BP.  Lastly, these BP monitors are oscillometric, and come with the hemodialysis machines.  Who knows when they were last calibrated? How often are the cuff sizes checked to be the correct size for the patient? Another question is which blood pressure measurement to choose. We measure blood pressure before dialysis, during dialysis, and at the end of dialysis. These of course vary, based on what else is going on, especially ultrafiltration.  One would expect that the predialysis blood pressure would be very high in general, and would come down with volume removal.  Some patients actually have a paradoxical intradialytic rise in blood pressure.  And what about those pesky intradialytic drops?  How does one account for all of these factors while deciding what to target?

We should not use dialysis BP for targeting treatment

This confusion with dialysis session-related BP becomes clearer once we consider that we measure BP during dialysis primarily for procedural safety. Low BP is bad and we need to stop ultrafiltration, give saline, and prevent hypotension-related complications. Extremely high BP may be similarly bad, though in the absence of symptoms, acutely lowering BP is less useful. But the use of dialysis BP readings for deciding antihypertensive management is unadvisable. We often do it because these are convenient numbers to reach for, not because these are not the most appropriate measures to guide us. So what should we use? In a 2016 #Nephmadness scouting report on hypertension, we discussed ambulatory BP monitoring (ABPM). The main advantage offered by ABPM is being to find out the real world readings; is this true hypertension, white coat hypertension or masked hypertension? This deciphering of true hypertension from white coat hypertension or masked hypertension is commonly accepted in the general population, or even in patients with chronic kidney disease not on dialysis.  Shouldn’t this make even more sense in dialysis?

In Part 2, we will examine a recent AJKD article that examines predialysis, interdialysis, and home blood pressure readings and the findings from that study.