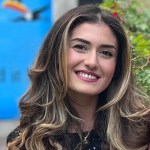 Dr. Shabnam Hamidi is a current home dialysis fellow at Sunnybrook Health Sciences Centre affiliated with the University of Toronto. She is passionate about helping patients maintain their independence on dialysis and improving patient access to home dialysis modalities. 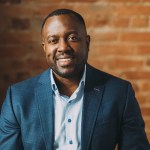 Dr. Bourne Auguste is a Staff Nephrologist at Sunnybrook Health Sciences Centre and an Assistant Professor in the Department of Medicine at the University of Toronto. His interests have focused primarily on home dialysis growth through equitable and innovative approaches.

Historically, patients starting hemodialysis are usually placed on a prescription consisting of thrice-weekly hemodialysis. This prescription is provided with the aim of achieving a minimum delivered single pool Kt/V of 1.2, based on KDOQI guidelines. This standard dialysis dose was developed in the context of patients that had already been on dialysis for at least two years with little to no residual renal function. That being said, the same guidelines suggest that patients with residual renal function may be considered for reduced dose of dialysis if there is substantial residual renal function, with the caveat that this needs to be monitored regularly to ensure adequate dialysis in the face of falling urinary clearance with time. Unfortunately, the reliance on small solute kinetics with urea oversimplifies complex processes and assumes that all small solutes have the same transport characteristics. As a result, practice is slowly evolving, moving away from this traditional approach of thrice-weekly hemodialysis in favor of a more patient-centered approach with incremental dialysis.

Over the last decade, the idea of incremental hemodialysis has been gaining traction as a theoretically beneficial option for patients starting hemodialysis. The premise of this approach is gradual adjustment of the hemodialysis prescription, including duration and frequency of dialysis, to achieve adequate solute and volume removal in response to falling urine output with time on dialysis. The practice of incremental dialysis has realigned priorities by reducing the emphasis on small solute clearance targets and focusing on the clinical assessment of the patient. As a result, the widespread adoption of incremental dialysis might be limited by the need to assess patients and their residual kidney function more frequently.

Furthermore, conventional hemodialysis has been associated with accelerated loss of residual renal function. This has been postulated as one explanation for why the first few months of hemodialysis are associated with the highest mortality, as demonstrated by data from the Dialysis Outcomes and Practice Patterns Study (DOPPS) along with USRDS data. However, one limitation that must be considered when reviewing this data is that it does not discriminate from individuals who have severe acute illness and need to start dialysis urgently. In some parts of the world, incremental hemodialysis is already well underway. The variations in uptake may depend on reimbursement policies that may incentivize providers to promote incremental treatment while maintaining pre-specified urea clearance targets. An observational study of Taiwanese patients receiving hemodialysis found lower hospitalizations rates, preservation of residual kidney function, fewer episodes of intradialytic hypotension, and improved clearance of middle molecules. Similarly, a large retrospective cohort study done in the United States demonstrated  better outcomes amongst patients receiving twice-weekly hemodialysis compared to thrice-weekly treatments with preservation of residual kidney function. Despite these notable benefits of incremental hemodialysis described by observational data, randomized studies are lacking.

The recent TWOPLUS-HD pilot study conducted by Murea and colleagues was a randomized pilot study that evaluated the safety and feasibility of an incremental approach in patients starting maintenance hemodialysis. The study randomized 51 patients from 15 dialysis units (1 inpatient, 14 outpatient) in 1:1 allocations to the study arm of conventional thrice-weekly hemodialysis or incremental hemodialysis (which consisted of twice-weekly hemodialysis for 6 weeks followed by transition to thrice-weekly hemodialysis at week 7). The group on incremental treatment received adjuvant pharmacotherapy which included diuretics, sodium bicarbonate, and patiromer. Patients had baseline 24-hour urine collections for documenting residual kidney function prior to randomization and then regularly at weeks 6, 12, and 24.  The patients in this study were followed over a 9-month period. The primary outcome was feasibility, as measured by adherence and rate of enrollment, with secondary outcomes including changes in residual renal function and total clearance parameters (including renal and dialyzer clearances). The study found a high rate (96%) of adherence to the prescribed hemodialysis regimen in both groups with completion of time urine collections by all participants who completed the 6 and 12 month follow up (19 and 10, respectively in each group).

The number of hospitalizations was higher in the conventional group (33 vs 19) with no events of unscheduled outpatient hemodialysis or hospitalizations due to volume overload, uremia, or hyperkalemia in the incremental group. Additionally, the cumulative hazard function for all-cause hospitalization was higher in patients on conventional hemodialysis treatment compared to the  incremental approach with a more pronounced difference 100 days after starting dialysis for both groups. 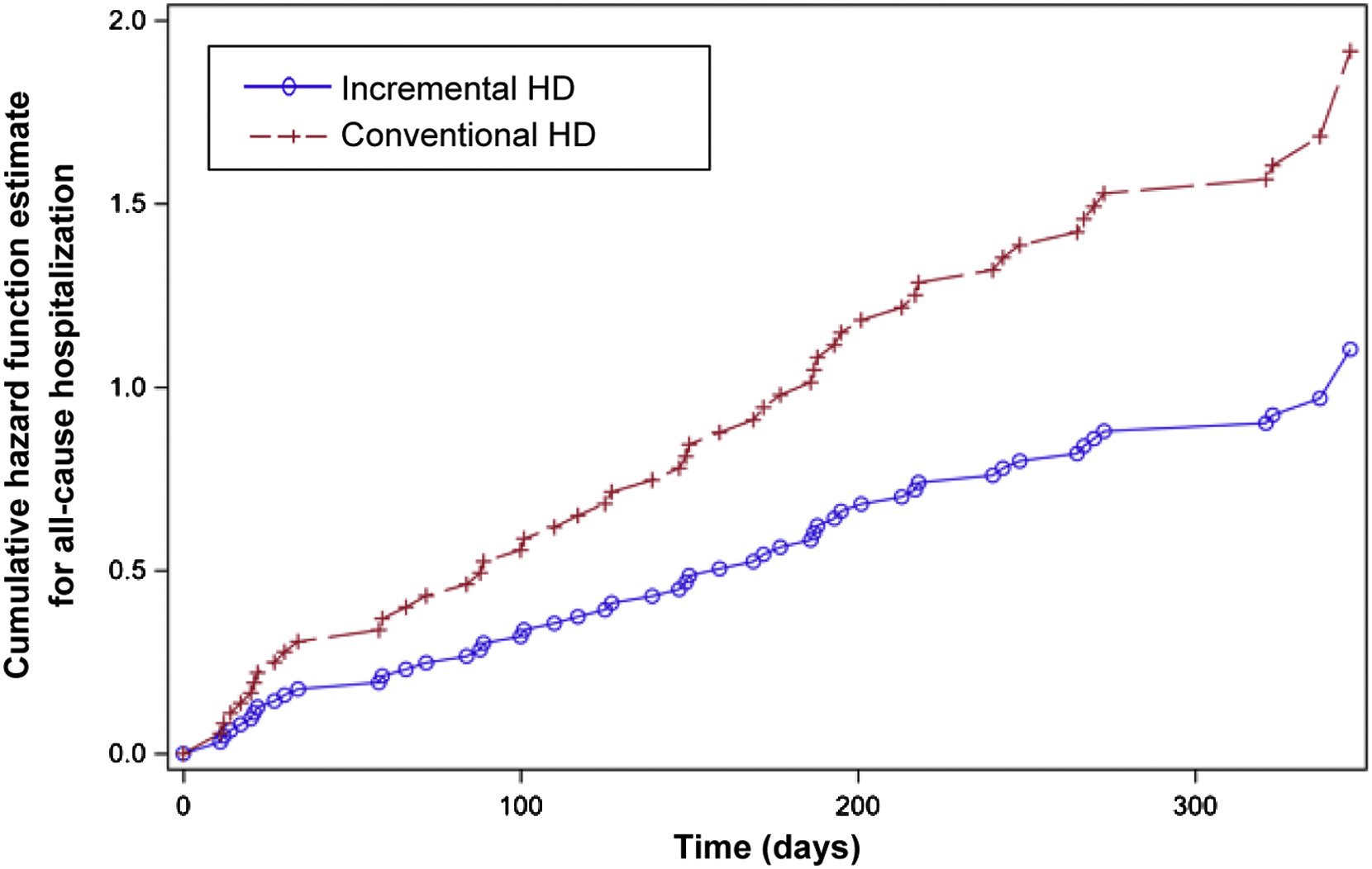 Overall, the results of this study coupled with a similar pilot study recently conducted in Europe are promising and demonstrate that a protocolized incremental hemodialysis regimen may be feasible and safe within hemodialysis units.  Furthermore, a graduated hemodialysis prescription is well founded in the era of patient-centered care. 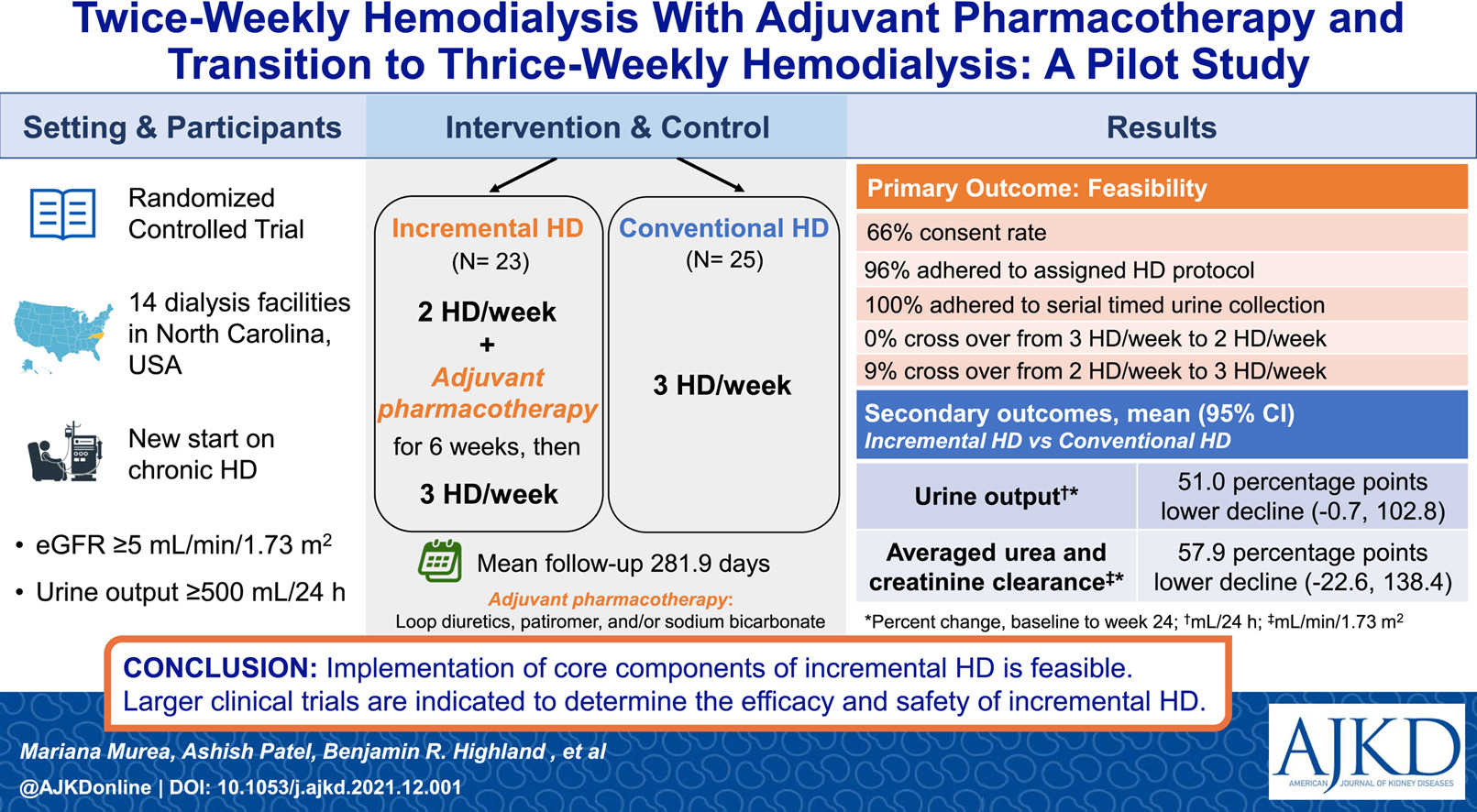 Nonetheless, the transition to incremental hemodialysis will require a significant paradigm shift for many practitioners in nephrology. Perceived barriers to this approach may include concern for inadequate clearance with the possibility of precipitous and variable loss of residual renal function, higher patient mortality associated with longer interdialytic periods, uncertain adherence to and inaccurately done serial urine collections, and an increased workload for dialysis unit staff. It would also be prudent to establish which patients would be suitable for this type of regimen. In their review of incremental hemodialysis, Kalantar-Zadeh et al propose a list of possible patient eligibility and implementation criteria. While these criteria provide clear and objective markers, programs may encounter challenges with implementation in settings where resources and time are both limited.

In conclusion, while the question of “Can we do it?” has mostly been answered with this feasibility study, the question of “Should we do it?” remains uncertain and requires further study. The safety, patient health outcomes, and health economics of an incremental approach will need to be confirmed with larger prospective randomized controlled studies powered for noninferiority. The authors provide a sample size calculation (N=350) required to conduct a non-inferiority trial comparing twice-weekly to thrice-weekly hemodialysis treatments.

Finally, it is paramount to recognize that the successful care of any single patient on hemodialysis is dependent on many moving parts, including dialysis unit staff, the primary nephrologist, patients themselves, their caregivers, and financial stakeholders. As such, the implementation and success of this approach requires stakeholder engagement and support at many levels. Patients will need ongoing education about the risks and benefits of incremental dialysis, as some may see it as systems-oriented solution (saving cost and increasing capacity) rather than a patient-centered care plan. Therefore, a non-inferiority trial is urgently needed as the next step to address any lingering concerns of patients, caregivers, and practitioners prior to widespread adoption of incremental hemodialysis.