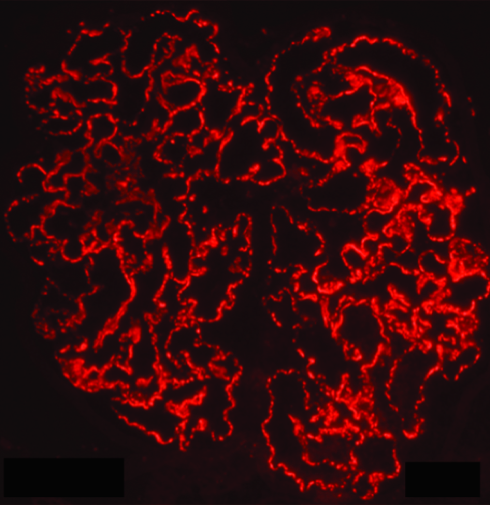 AJKDBlog: Your review is in part a mystery tale about the search for an elusive antigen involved in the pathogenesis of membranous nephropathy (MN). Were you surprised at how long it took for this mystery to be solved?

DS: In retrospect, yes, it does seem that the antigen responsible for most cases of what was previously called idiopathic MN should have been identified many years ago. This is especially true now, as so many people have been able to quite easily detect antibodies to PLA2R since our discovery was reported in 2009. On the other hand, were it not for serendipity, we—like so many other groups before—might still be searching for the antigen. Our conviction that such an antigen existed was based on studies in a rat model of MN conducted at our institution, Boston University, and in the Netherlands in the late 1970s. That work showed that antibodies circulating in the rat identified an intrinsic protein in the glomeruli that was later shown to be a protein called megalin, which is present on the surface of glomerular podocytes. What led many of us astray for several years was the belief that megalin is also the human autoantigen. This was a mistake because megalin is not present on human podocytes. Moreover, the standard techniques we and others were using to search for any other potential glomerular antigens were destined to fail because the reducing agents included in the buffer destroyed the epitopes in PLA2R that are seen by the human autoantibodies. Thus, it was quite fortuitous that for quite unrelated reasons, we chose to perform our subsequent experiments under non-reducing conditions, which preserved the epitopes and allowed the autoantibodies to see the antigen on Western blotting. But that was not the end of it. We still had to identify protein we were seeing on Western blotting. Our excellent collaborators at the University of Louisville were able to provide us with a menu of candidate proteins based on their mass spectrometry analysis of the putative antigen, but it took us over a year to narrow down the field and eventually identify the protein as PLA2R with the help of Dr. Gérard Lambeau in Nice, France, who provided us with the essential reagents.

AJKDBlog: In your view, what are the key remaining questions concerning the pathogenesis of MN?

LB: Although the discovery of antibodies to PLA2R was an important “next step” in our understanding of primary membranous nephropathy, we, as nephrologists, are still far from a full understanding of disease pathomechanisms and antigen-specific therapies.

The currently available assays for anti-PLA2R measure the overall titer, which correlates well with and even predicts clinical disease activity. However, recent research from the Lambeau laboratory has suggested that the actual epitopes targeted within the molecule may also have a bearing on disease severity. Future work will focus on whether epitope specificity or immunoglobulin G subclass has implications for prognostication or monitoring of clinical disease activity.

We certainly do not have a clear understanding of what factors are involved with the initiation of disease. The strong genetic association with the  human leukocyte antigen region (and its interaction with the PLA2R1 locus) suggests that inheritance of a unique combination of one or more class II major histocompatibility complex molecules with the precise amino acid sequence of the autoantigen may be important for disease expression. But what is the trigger? Could it be molecular mimicry due to infection with a microbe bearing a protein that contains a region of similarity with PLA2R?  Or perhaps there is dysregulated expression of the molecule within the cells of susceptible individuals, either due to injury or to genetically altered levels of gene expression. Further analysis of the precise humoral, and perhaps more importantly, T-cell epitopes involved in disease may give us clues about potential triggering infections.

Despite all the emerging evidence from around the world that demonstrates a robust association between the immunological (anti-PLA2R) and clinical (proteinuria) courses of disease and that this information may be useful for monitoring or even predicting treatment-induced or spontaneous remission, we still do not have any evidence that we should be tailoring our therapies based on this information. Is it sufficient to end a treatment regimen early once anti-PLA2R disappears, or should we extend treatment to ensure that immunological remission occurs?  Only well-designed and adequately powered future studies can address this.

We are encouraged by the number of laboratories around the world that have joined us in finding the answers to these and the countless other questions that will arise in our continued efforts to understand this fascinating autoimmune cause of the nephrotic syndrome.

AJKDBlog: Can you comment on the usefulness of a positive PLA2R antibody testing in evaluating a pre-transplant patient with membranous nephropathy?

1 Comment on Membranous Nephropathy in 2016: Or Should We Call It PLA2R-Related Nephropathy?