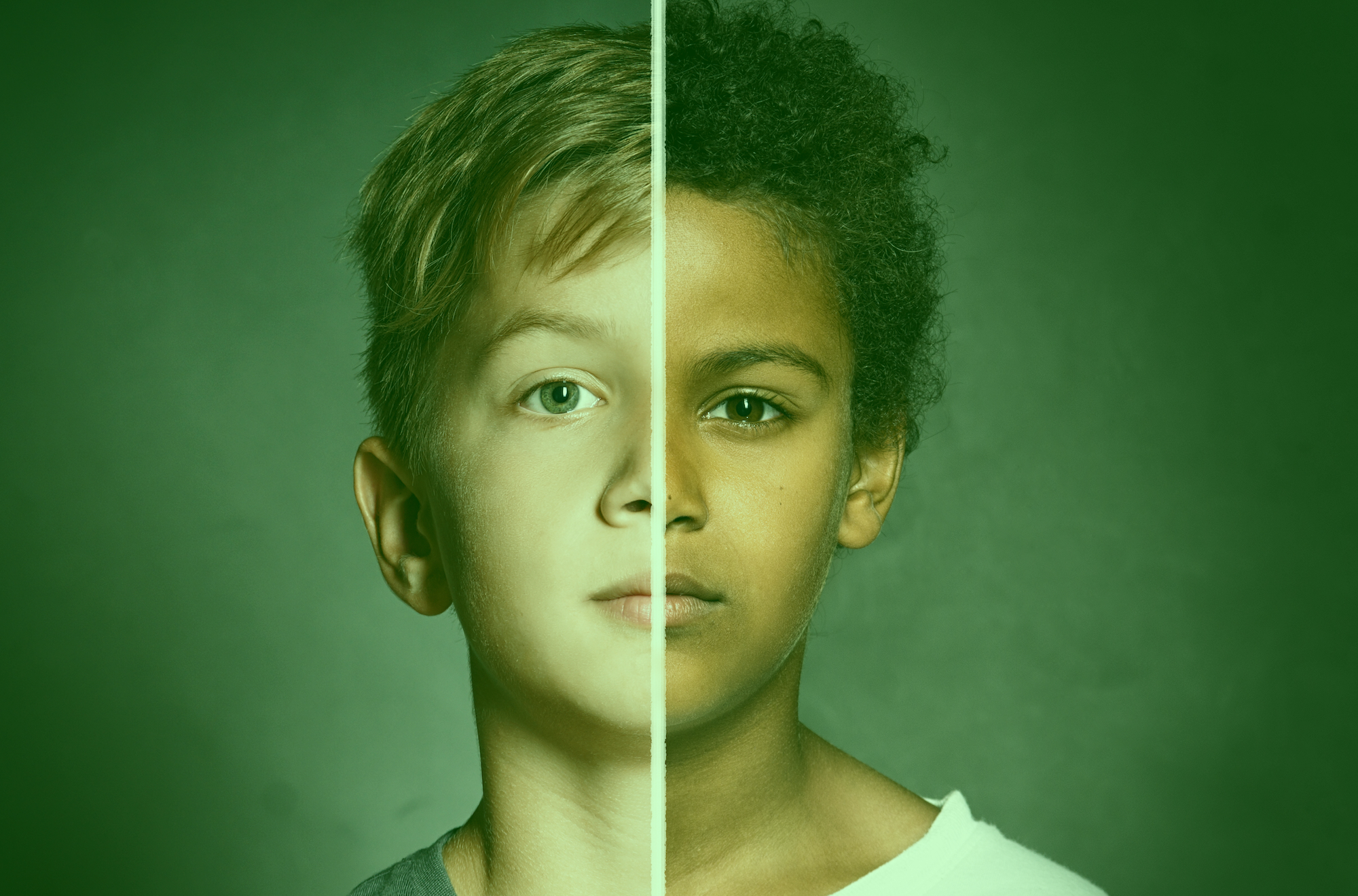 Back on March 7th, we opened the brackets for NephMadness 2017. Since then, we have blitzed the AJKD Blog with 32 NephMadness posts. For four weeks we flooded the web with novel, fully referenced, non-commercial, free, medical education. Today on day 29, we find out the NephMadness 2017 Champion: Genes in ESKD Disparity. Read Dr. Martin Pollak’s commentary on APOL1 here.

The final match-up pits the darling of scientists everywhere, CRISPR-Cas9, versus the underdog champion of The Right Kidney, Genes in ESKD Disparity. 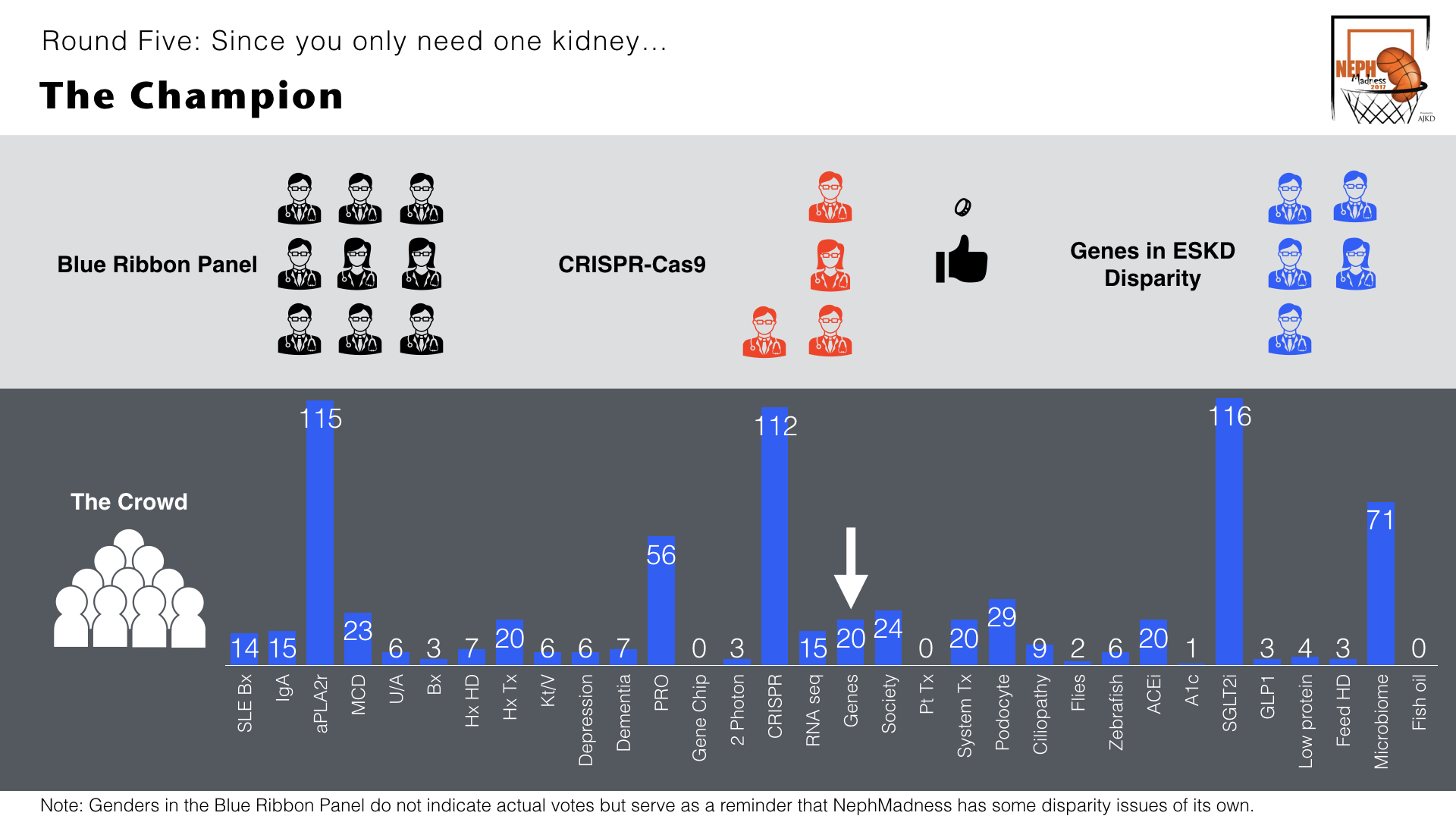 The dream match-up. Top 2 concepts in the tourney. Power, grace, and precision. CRISPR shows a little more refinement down the stretch and pulls away, but Genes in ESKD Disparity is still young and developing. They’ll be back.

Round 1: there were 16 “Saturated” choices to make, 14 of my choices advanced.

Round 2: there were 8 “Effluent” choices to make, 6 of my choices advanced.

Round 3: there were 4 “Filtered” choices to make, 3 of my 4 choices advanced.

At this point, I’m thinking I’m pretty smart (of course, that conclusion is nonsense as that is not how a real bracket is filled out, as the BlueRibbon panel fills the bracket out in sequences based on each round’s winners, not all at once as you all had to do).

Old smartypants just got a wake-up call. So now I have to choose a finalist from the two I didn’t vote for. I really thought CRISPR, as amazing a technology and potential as it is, could not beat PLAR2 because PLAR2 is out there, changing the way we practice. CRISPR was highly recruited, but is still growing and sat out the season, being “red-shirted”; PLAR2 was the sophomore that won the NCAA MVP. The majority of the Blue Ribbon panel disagreed with me.

The genetics of ESKD affects so so many people, but SGLT2 inhibitors are a nephrologist’s dream. They represent renal physiology, at the workhorse of the kidney, the proximal tubule. Genetics is a better basketball shoe, SGLT2 is player-specific metabolic profile training. Again, I was at odds with my panel.

Picking a finalist from two I didn’t vote for is difficult, but it would be difficult no matter who made the final two. There were many great topics this year. And despite not voting for them in the last round, I voted for them to get them to that round, so I think they are both well-deserved finalists. I went back and read the sections on each finalist.

The thought of gene repair is mind boggling, but does not seem to be fantasy with CRISPR-Cas9 technology. Genetic predisposition to ESKD explains so much of what we have seen since we started diagnosing kidney disease and the APOL1 story has changed the way we look at so many renal diseases, and it may be only the tip of the iceberg! How do I pick one? I am going to go with CRISPR, since maybe, just maybe one day it could impact genetic disparity. CRISPR trumps genes. This Blue Ribbon panel member thanks the NephMadness developing community for trusting me, teaching me and very much entertaining me. I hope my comments have similarly given something back.

Maybe in a year or two, CRISPR-Cas9 will be the winner in nephrology, but still too many rookies there. I personally prefer a good old-fashioned concept like letting dialysis patients eat, but I also long for 1980s basketball when the Big Three of the Celtics took on LA’s Showtime Lakers.

Pollak Ponders the Potential of APOL1 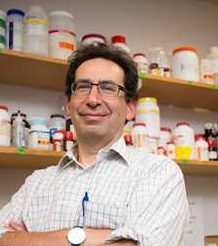 Dr. Pollak, MD, is Professor of Medicine at Harvard Medical School and Chief of the Division of Nephrology at Beth Israel Deaconess Medical Center. His group uses genetic methods to identify and study the mechanisms of kidney disease genes. His laboratory is experienced in human genetic methods, as well as cell-based studies of podocyte biology and the development and analysis of animal models of kidney disease. Dr. Pollak’s laboratory has a particular interest in the biological mechanisms of APOL1, ACTN4, and INF2-mediated disease.

Since 2008, it has been apparent that one locus is a major driver of the high rate of kidney disease among people of recent African ancestry. Since then, we have learned that the specific gene variants driving this disparity are two coding sequence changes in the APOL1 (apolipoprotein L1) gene. People inheriting two of these risk alleles are at high risk of kidney disease, following an essentially recessive pattern of inheritance. While not the sole explanation for this health care disparity, APOL1 is clearly a major driver. Over the past 7 years, a wealth of epidemiologic studies have helped clarify the APOL1-kidney disease association in more detail. The odds ratios vary by kidney disease category, and are summarized (for example) here.

The association between APOL1 variants G1 and G2 (as they are called) and HIV-associated nephropathy is particularly strong. Although not associated with the development of diabetic nephropathy, APOL1 genotype appears to be a strong risk factor the progression of chronic kidney disease, independent of underlying cause. The shared mechanism underlying several apparently different forms of kidney disease suggests that we should perhaps be thinking of “APOL1-associated nephropathy” as a disease entity.

The mechanisms underlying this association remain unclear. Most, but not all, studies to date in cell and animal models support a gain of function, toxic effect of these two APOL1 variants on cells.  Multiple studies in humans, cells, and animals support a model whereby increased kidney expression of APOL1 may be a trigger for the development of overt kidney disease in people genetically predisposed. Among the possible mechanism(s) of cell toxicity may include effects at cell membranes, mitochondria. People have used a variety of animals to try to model APOL1-associated disease, from flies and yeast to fish and mice.

How will our knowledge of APOL1 affect patient care? There is little data yet suggesting that APOL1 high-risk individuals with kidney disease respond differently to any specific therapies than those without. It is, thus, unclear how knowledge of a person’s genotype would alter his/her care based on present understanding. Perhaps the most immediate potential implication of APOL1 genotyping may come in the kidney transplant setting. There are important issues related to the implications of APOL1 genotype on both the donor and recipient.

There are still more questions than answers. Will early identification of high-risk individuals help guide preventative therapies? Why do only a subset of people with a high-risk genotype develop overt nephropathy? Can understanding the mechanisms of APOL1-associated nephropathy lead to more personalized therapies? What are the societal implications of labeling a healthy individual as at high-risk of kidney disease on the basis of genotype?

We can hope that work in the upcoming years will help begin to answer some of these important questions.

Read more about Genes in ESKD Disparity in the Disparities in Nephrology region.