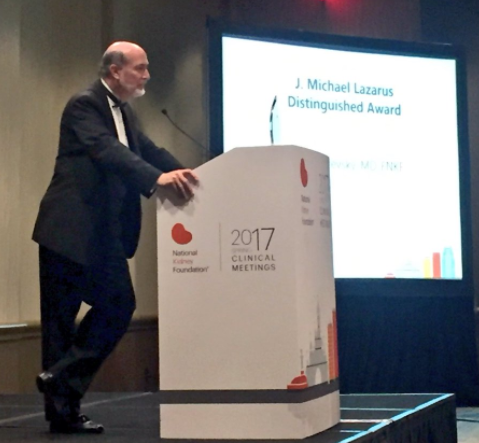 On Friday, April 21, Paul Palevsky, the winner of the 2017 J. Michael Lazarus Award, presented a keynote address on acute kidney injury (AKI), titled “We Don’t Have to Fail at Acute Renal Failure.” The talk essentially followed the title, highlighting the burden of AKI and then emphasizing that we can do better.

Dr. Palevsky described multiple efforts to reduce the incidence of AKI. Most of these were common sense, but unfortunately have not been widely implemented. These include the concept of ‘sick stop’ medications – agents that are generally beneficial but can predispose to AKI when volume status is threatened. Specific examples include ACE inhibitors and ARBs, diuretics, NSAIDs, and metformin. Critically, all patients should be educated that, when they are sick, with a GI illness or other systemic process, to hold these medications and call their doctors with questions. Such a small step could have a major impact on community-acquired AKI.

Dr. Palevsky went on to describe that, in fact, attention to these same medications, and some others, could likely also have a major impact on hospital-acquired AKI. He highlighted a QI effort by Brown et al (Circulation: Cardiovascular Quality and Outcomes, 2014), showing that simple common sense interventions, if systematically applied, can reduce procedure-associated AKI. Among the best data to date come from the Nephrotoxic Injury Negated by Just-in-time Action (NINJA) quality improvement effort in children. (As an aside, NINJA is great name for a study). NINJA is a QI study in which each pharmacist assigned to an inpatient pediatric team received an automated report identifying all non-critically ill inpatient children with high nephrotoxic medication exposure. Pharmacists would then recommend daily assessment of kidney function and often would recommend specific medication changes, as clinically appropriate. This intervention resulted in a 64% decrease in AKI events as compared to the pre-QI intervention period.

The take-home point from much of Dr. Palevsky’s talk was that AKI in many cases is preventable with attention to detail and enhanced systems in medical care. Given the burden of AKI and the high risks of increased morbidity and mortality following AKI, these doable efforts should be systematically implemented more widely.

1 Comment on #SCM17: Common Sense Ways to Reduce the Burden of AKI