This is Part 1 of a 2-part series on Hepatitis C and kidney transplantation, highlighting some of the exciting breakthroughs impacting this field that have come about as a result of promising antiretroviral therapy. 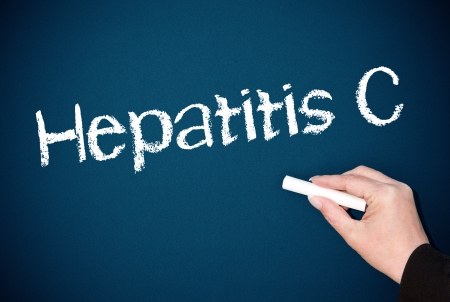 In 1989, Dr. Michael Houghton and his colleagues published two papers in Science describing their work in identifying and cloning the Hepatitis C virus (HCV) and developing a test to diagnose HCV. It took almost 20 years for this mystery virus, previously called “non-A, non-B hepatitis,” and the culprit for most blood transfusion-associated hepatitis cases in the 70s and 80s, to be identified. Almost 30 years after HCV was discovered, approximately 71 million persons worldwide remain chronically infected with HCV. In the United States, approximately 3.5 million persons have HCV: 2.7 million in the general population, plus another 800,000 in the incarcerated population.

HCV greatly impacts patients with kidney disease as it is not only highly prevalent but also associated with inferior outcomes. Among ESRD patients, a DOPPS study quantified the prevalence at a mind-boggling 13.5% and this varied between 2.6% to 22.9% across 8 countries. In the kidney transplant population, the prevalence has been reported to be 6.8%.

Despite these inferior outcomes and complications, kidney transplantation has been pursued because of superior patient survival compared to remaining on the waiting list. This is the same rationale for transplanting older patients or those with diabetes, i.e. even if older patients don’t do as well as younger counterparts, or diabetic patients don’t do as well as non-diabetic patients, transplantation is pursued as it still confers these higher risk patients a survival advantage compared to the alternative of remaining on dialysis.

The Past: The Interferon Era

Up until a few years ago, the available treatment for patients with HCV was pegylated interferon (IFN) + ribavirin (RBV). Unfortunately, this drug regimen had suboptimal efficacy (approximately 50% cure rate), particularly in patients with renal failure (approximately 30-40% and even lower in genotype 1). Pegylated IFN was also poorly tolerated as the drug in and of itself was implicated in a variety of nephrotoxic mechanisms. It is not surprising that during the IFN era, a study using the DOPPS cohort found that HCV was very rarely treated among hemodialysis patients (approximately 1% received a prescription for IFN or RBV) and this was also true even among waitlisted patients (3.7%).

During the IFN era, patients pursuing a kidney transplant had the option of being treated for HCV pre-transplantation but not post-transplantation due to the high rates of acute rejection attributed to IFN. HCV+ transplant candidates who were not treated or who did not respond to therapy pre-transplantation had the option of listing for a HCV+ kidney. The individual benefit to be gained from this is that it reduced one’s waiting time on the deceased donor waiting list due to the relatively few patients competing for a HCV+ kidney. In a study of the UNOS database from 1995-2009, Kucirka et al found that recipients of HCV+ kidneys waited 310 days fewer than the average waiting times at their center and 395 fewer days than counterparts who waited for HCV- kidneys.

From a societal perspective, there is a benefit to increasing organ utilization, something that is badly needed due to the ever growing demand for kidneys that are in short supply. Reese et al reported that from 2005-2014, only 37% of available HCV+ kidneys were transplanted (discard rate of 67% compared to the usual discard rate of 20%). However, these aforementioned individual and societal benefits must be weighed against several concerns for transplanting HCV+ kidneys into HCV+ recipients. These concerns include the nearly universal transmission of the virus and possible genotype superinfection and also inferior patient and graft survival in patients who receive HCV+ compared to HCV- kidneys.

The Present: The DAA Era

In the last few years, the options and outlook for kidney transplant candidates and recipients have changed dramatically with the emergence of direct acting antiviral (DAA) therapy. 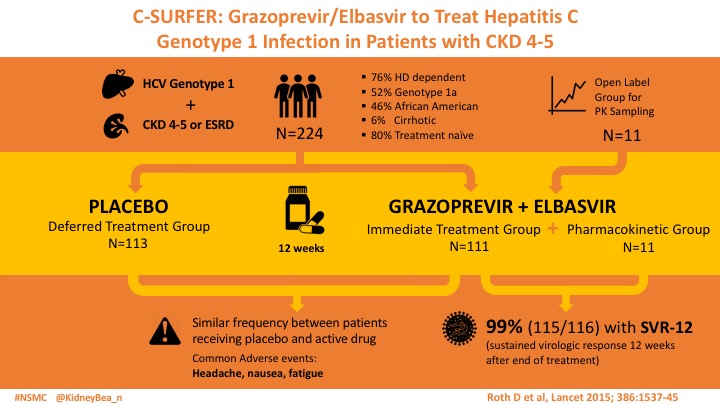 The overall effects of treating HCV post-transplantation on patient and graft survival are not yet known. The ability to treat HCV post-transplantation, however, strengthens the argument for delaying DAA treatment and listing for a HCV+ kidney. In the study by Sawinski mentioned earlier, patients who received HCV+ kidneys waited approximately 484 days (1.3 years) fewer than those who received HCV- kidneys. At our Nashville VA center where 20% of our transplants since December 2014 (implementation of the new Kidney Allocation System) have been HCV+ donors to HCV+ recipients, HCV+ recipients waited approximately 4.4 years fewer than HCV- recipients of HCV- kidneys (2.6 years versus 7 years).

Taking into account the benefits of a reduced waiting time and an increase in organ utilization associated with listing for a HCV+ kidney, an algorithm in managing pre-transplantation patients with HCV was recently published in a review by Sawinski and Bloom. In summary:

Read about the future of HCV and kidney transplantation in Part 2 of this 2-part series.

1 Comment on Hepatitis C and Kidney Transplantation: Past, Present, and Future