This is Part 2 of a 2-part series on Hepatitis C and kidney transplantation. Part 1 reviewed the history of HCV, the era of IFN therapy, and the use of DAAs in patients with advanced CKD. 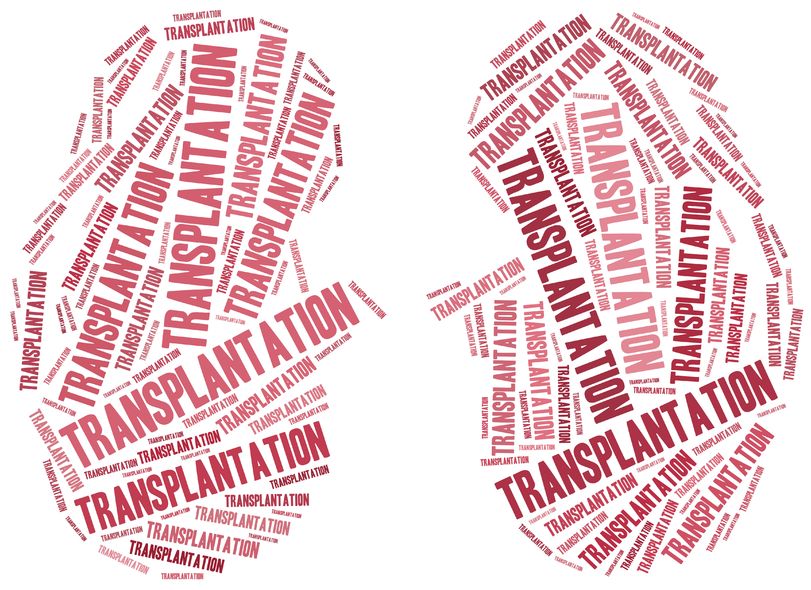 Now that we think we can reliably and safely treat HCV in kidney transplant recipients, the latest question that has come up is which patients should be offered access to HCV+ kidneys. Currently, there are about 500+ of these HCV+ kidneys that are discarded each year. However, with a growing opioid epidemic and increasing number of deaths due to drug overdose, the number of HCV+ donors is expected to increase in the next few years.

There is now the potential for offering HCV+ kidneys even to those without HCV. Goldberg et al recently published the results of the THINKER Trial, a pilot study where 10 patients who did not have HCV received HCV+ kidneys. Donor genotyping (completed in 5 hours) was performed during organ allocation and only genotype 1 donors were used (this is important as donor genotyping during allocation is not done in the real world setting). Patients underwent a 3-step counseling and informed consent process during recruitment. They enrolled 10 patients who had a long expected waiting time on the list and had no liver disease. All 10 patients enrolled in the study were viremic by post-op day 3. They were treated with elbasvir/grasoprevir with subsequent undetectable HCV RNA within 4 weeks of starting HCV therapy. All patients had sustained virologic response at 12 weeks (SVR-12). The median 6-month serum creatinine was 1.1 mg/dL (range 0.8-1.3 mg/dL). Of note, these patients were transplanted very quickly after activation on the waitlist (median time 58 days, range 11-130 days). 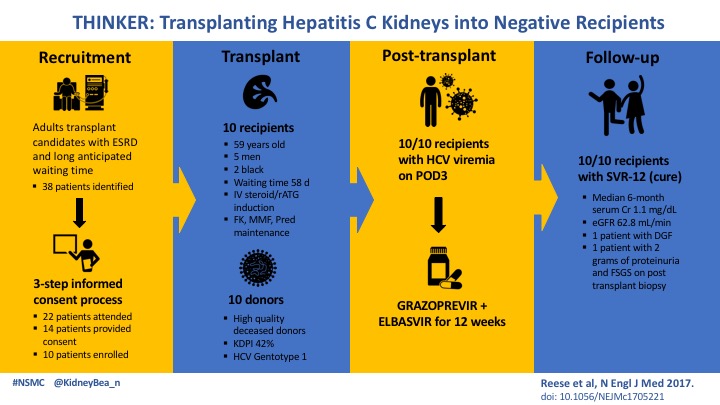 In another pilot study, EXPANDER-1, Durand et al enrolled 10 non-infected patients who received HCV+ kidneys; donor genotyping was not performed during allocation and instead occurred post-op. All 10 patients received elbasvir/grasoprevir, with the first dose given pre-transplantation. Sofosbuvir was added when genotypes 2 or 3 were identified in the donor. Similar results to THINKER were found, with all patients having undetectable HCV by treatment week 2 and so far, 6/6 patients have achieved SVR-12.

Dr. Peter Reese and Dr. Kimberly Brown participated in a spirited debate during the ATC 2017 meeting in Chicago entitled “Using Hepatitis C Infected Donor Organ in the Era of Direct Acting Antivirals: Access for All or Only for Some?” Dr. Reese debated for the PRO side, pointing out that although there is some risk in accepting HCV+ kidneys, this must be weighed against the risk of the status quo, which is to remain on the waiting list. He described the informed consent and education process employed in the THINKER trial and shared that most patients were willing to accept a HCV+ kidney under certain scenarios of varying cure rates. He also emphasized the importance of risk mitigation by utilizing rapid genotying during donor allocation, use of KDPI <85% kidneys, and a back-up regimen of sofosbuvir and ribavirin. Dr. Brown debated for the CON side, arguing that if organ utilization is the goal, then the focus should be on utilizing HCV+ organs in HCV+ patients as this is currently not being maximized. She warned against assuming that all patients can be cured and also expressed concern about insurance companies dictating which drugs can be used post-transplantation (the cost of DAA therapy for 3 months is approximately >$80,000). Ultimately, both sides agreed that at this time we are not quite ready for HCV+ to HCV- transplantation outside of a clinical trial.

The emergence of DAA therapy to treat HCV has been one of the most exciting advancements in medicine in the last few years. The ability to cure HCV before and after kidney transplantation has enormous clinical implications for patients suffering from this disease. As we gain more experience in using DAA therapy in the kidney transplant population, we will likely be able to better define which patients would benefit the most from accepting a HCV+ kidney. Patient education and shared decision-making will remain important in helping patients navigate through a complex algorithm of weighing the risks versus benefits of delaying DAA treatment. Finally, it will be interesting to see if curing HCV will translate into an actual improvement in specific post-transplantation outcomes such as patient and graft survival.

This is Part 2 of a 2-part series on Hepatitis C and kidney transplantation. Part 1 reviewed the history of HCV, the era of IFN therapy, and the use of DAAs in patients with advanced CKD.