The osmolal gap is most commonly used in screening for toxic alcohol ingestion. In the absence of other unmeasured solutes, sodium, glucose, and urea are the primary solutes responsible for osmolality. If a significant (usually the cutoff is > 10) difference between directly measured osmolality and the calculated serum osmolality (Sosm) is present, then the difference (the osmolal gap) may represent the presence of an unmeasured solute.

The concept of the serum osmolal gap has always been tricky to grasp and even harder to explain. As sodium is the main extracellular cation, it makes sense that sodium (and the corresponding anion, either chloride or bicarbonate) makes up the lion’s share of the osmolality. But what about other cations such as calcium, potassium, or magnesium? Don’t they count at all? To make things more confusing, some countries (like the US) report [Na] in mEq/L (or mmol/L) but report BUN and glucose in mg/dL.

Let’s start by making sense of the most basic formula:

The presence of an elevated osmolal gap (> 10) in this scenario raises the heart rate of any nephrologist, but let’s not forget that ethanol ingestion can contribute to the osmolal gap, too. Let’s assume this patient drank vodka to excess and had a measured ethanol level of 92 mg/dL.  The correction factor to convert to mmol/L based on ethanol’s molecular weight is 4.6.

If you go to a common online calculator such as MDCalc, their formula is the same as what we have demonstrated above. 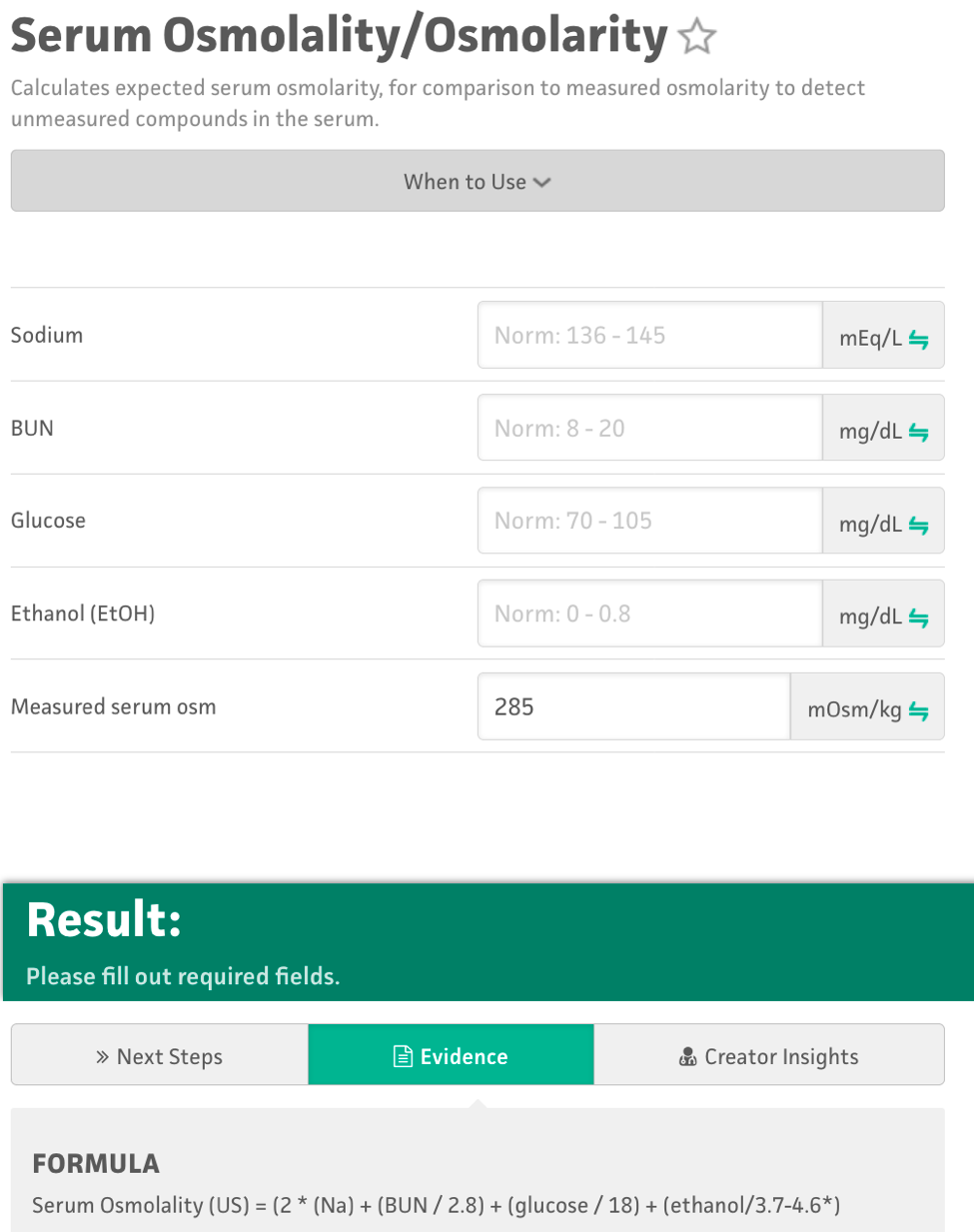 So far so good, but several problems arise. This is by no means the only equation used for calculating Sosm – see table below: 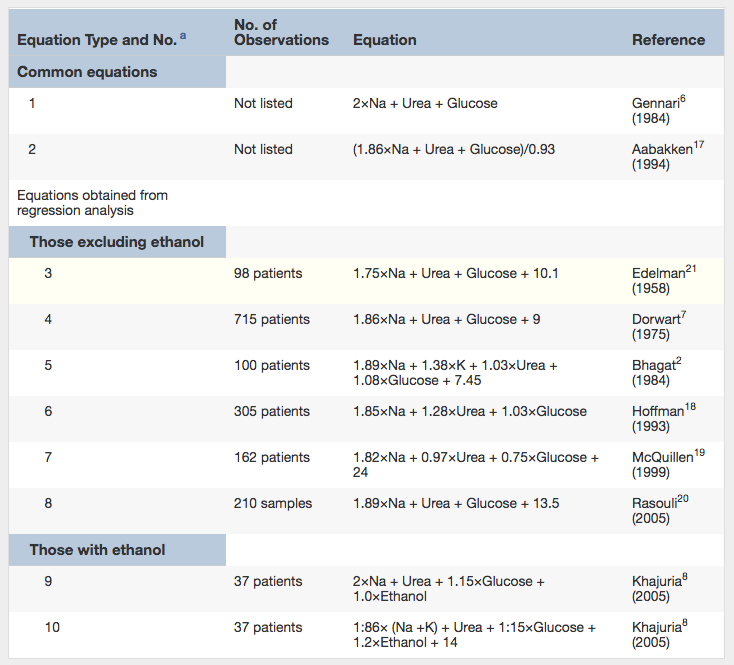 Previously Published Equations for Calculating Osmolarity. Note: All values are in mmol/L. For use with conventional units, multiply urea by 2.8, glucose by 18, and ethanol by 4.6. Table 1 from Lepeytre et al, AJKD © National Kidney Foundation.

Additionally, several of these formulas were performed in small cohorts without external validation, and the measurements were done with outdated equipment.

Close to half had a detectable ethanol level. The authors performed linear regression models on this cohort and similarly analyzed previously published formulas. The addition of potassium did not modify the osmolal gap calculation significantly, so it was excluded for simplicity. They then identified that coefficients of 1.2 for urea, 1.4 for glucose, and 1.2 for ethanol would generate the most accurate and precise measurement, which led to the following formula:

or to convert this to conventional units where BUN, Glucose, and EtOH are in mg/dL:

There were 138 measurements in the cohort with toxic alcohol ingestion. Lepeytre et al assessed how this new formula performed statistically when compared to other formulas in predicting which of these patients would need a specific treatment such as fomepizole or dialysis. Using the coefficients stated above for urea, glucose, and ethanol, the modified equation was clearly superior to previously published formulas. Using a cutoff of an osmolal gap > 5.0 led to a 50% PPV and 99% NPV, and using an osmolal gap of > 10.0 led to 82% PPV and 96% NPV in identifying patients with toxic alcohol ingestion. 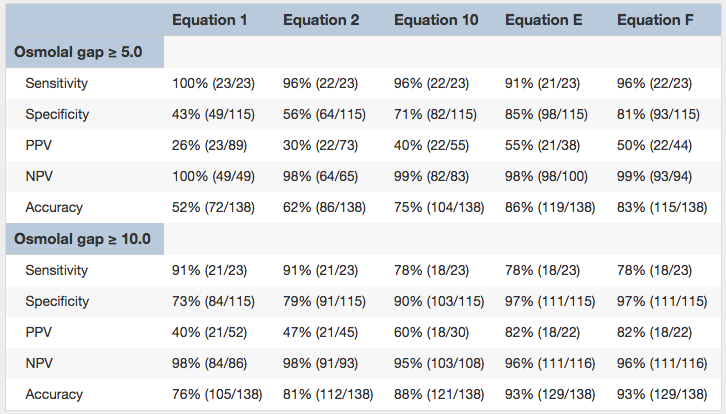 What should we make of this? Lepeytre et al note that the common formula we used for Patient A above created a high number of false-positive cases for toxic alcohols. The formula assumes that urea, glucose, and ethanol behave like ideal solutes, similar to Na. This paper (and previous publications) suggest that this may not be true; thus, the need for a modifying coefficient.

What are the potential real-life clinical implications? For example, a lower false positive rate would translate into fewer empirical doses of fomepizole (or even dialysis) in patients suspected of toxic alcohol ingestion. The authors also make the important point that the presence of an elevated osmolal gap does not signify toxic alcohol ingestion if the clinical context does not fit. As with most things in medicine, the history of exposure is more important than the calculation to determine the pretest probability of toxic ingestion.

This paper represents the largest osmolal gap cohort ever studied, and the subsequently derived equation outperforms those previously published. With external validation, we may see this new formula on online calculators in the near future.

2 Comments on How Accurate Are the Formulas for the Osmolal Gap?