The Fellows-in-Training (FIT) Bowl is always one of the most unique and enjoyable aspects of #KidneyWk for trainees, with a blend of education, competition, collaboration, and maybe even some trash-talk.

This year’s FIT Bowl was held in the exhibit hall area and I really enjoyed the open layout. The competition was fierce this year, and we saw 4 teams advance to the final two rounds. The semi-finalists for these competitions were: 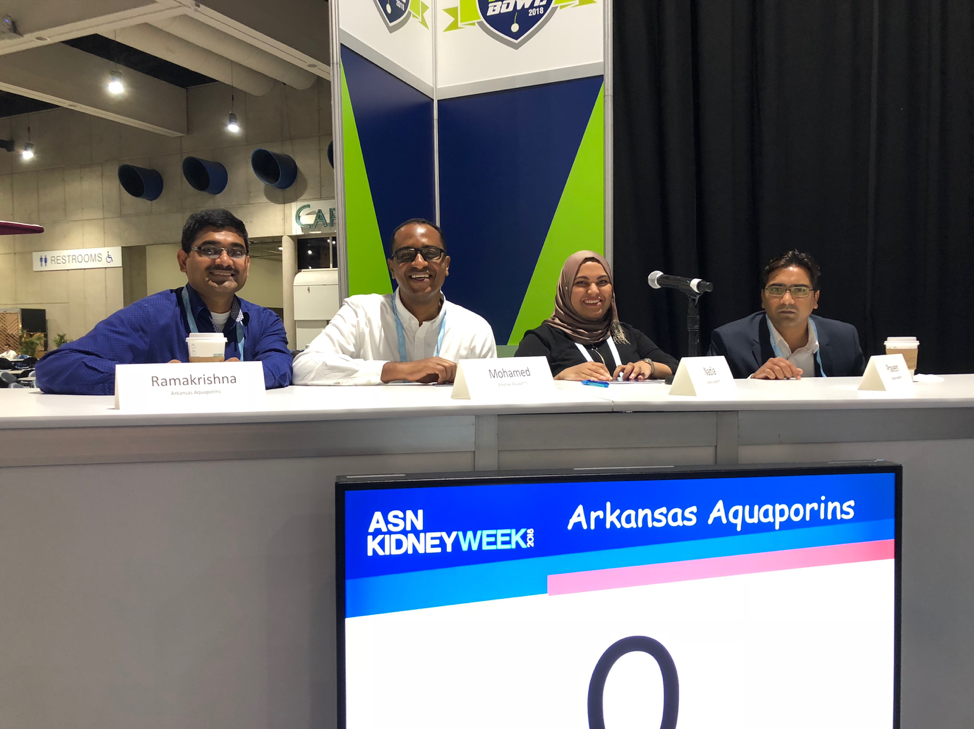 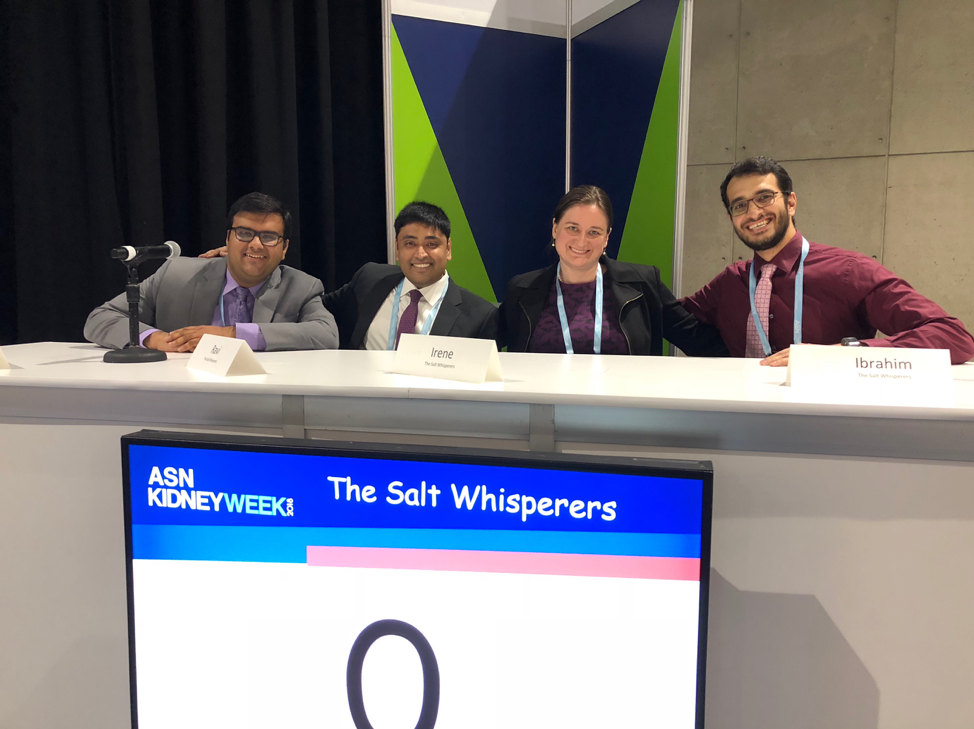 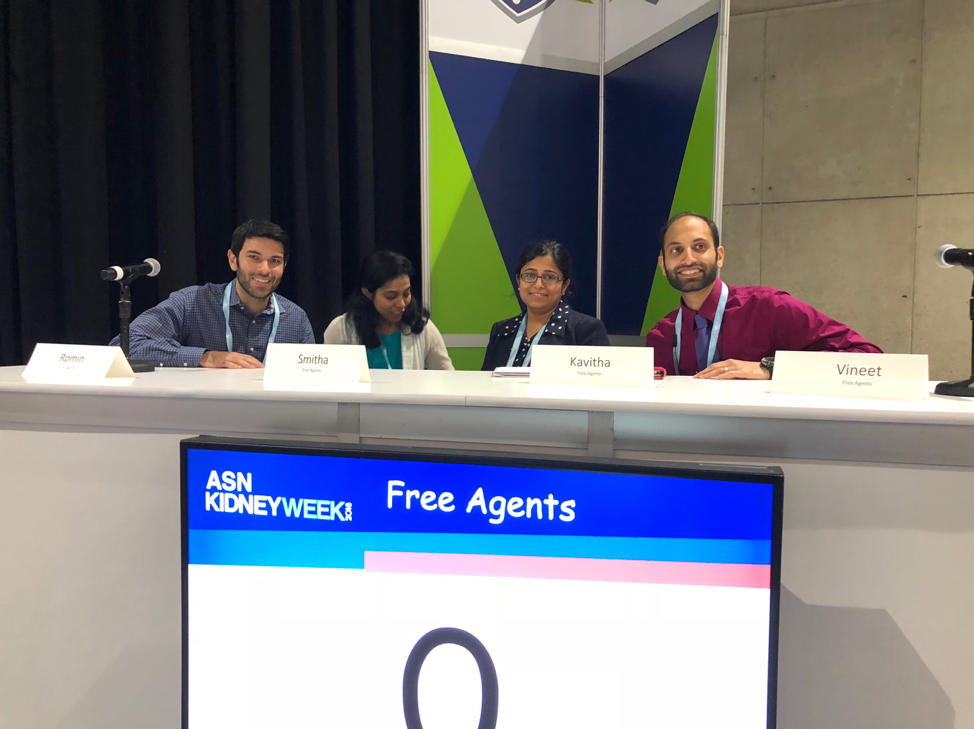 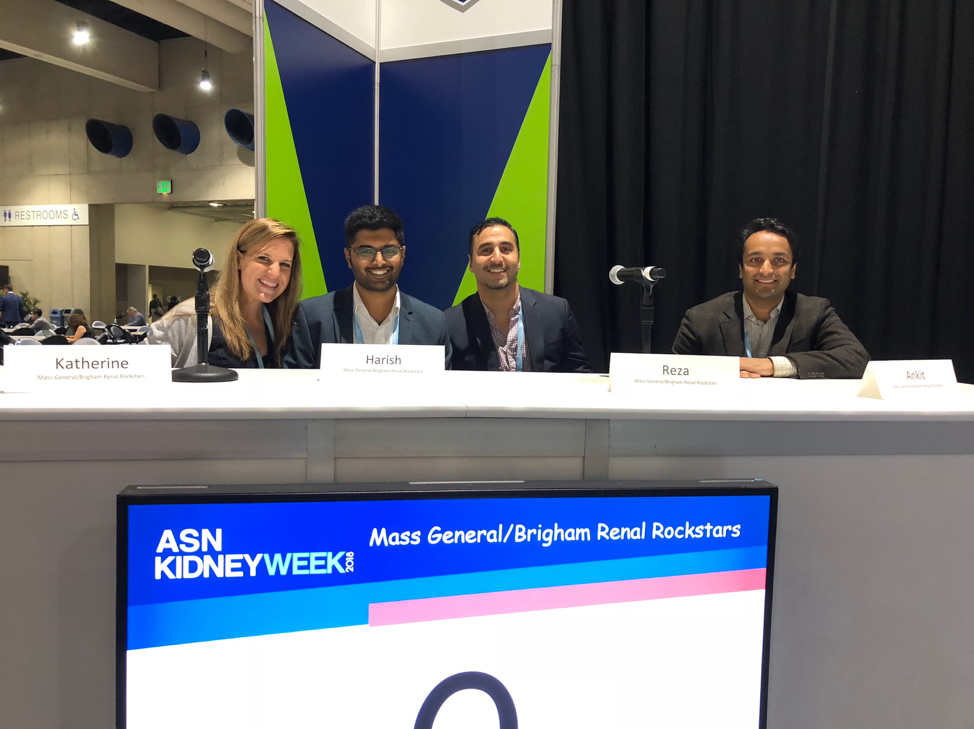 A brief summary is presented to both teams. A board of possible options for further information, lab testing, and imaging are shown, and each team requests what they would like to obtain. Justification for the information is explained verbally, and points are given for the appropriateness of each request. A differential diagnosis is constructed at various times, and ultimately the pathology findings from the kidney biopsy are revealed. Interpretation of the histology is done by the team, with guidance from a nephropathologist.

Case summary: A 58-year-old female is evaluated for rising SCr. She has ALL, and received a HSCT in 2006, and then again 6 months ago when she had recurrent leukemia. Baseline SCr was 0.7 mg/dL 3 months ago, and now the SCr has risen to 3.2 over the last few weeks with low tacrolimus levels. She also had a recent history of GVHD: the patient was initiated on MMF, and Tacrolimus was discontinued. She was also recently initiated on amlodipine and hydralazine for BP control.

Physical exam: Pertinent for LE edema and skin rash over her legs

Lab testing: New proteinuria quantified at 6 grams/gram, and an interesting history of a father who was on dialysis due to biopsy proven C3 GN. Further lab testing revealed evidence of a mild thrombocytopenia, anemia, and evidence of hemolysis based on peripheral blood smear.

Initial differentials: Both teams successfully narrowed down their top differentials to a drug induced vasculitis, and thrombotic microangiopathy (either from CNI use or GVHD).  Lower on the list was membranous nephropathy. 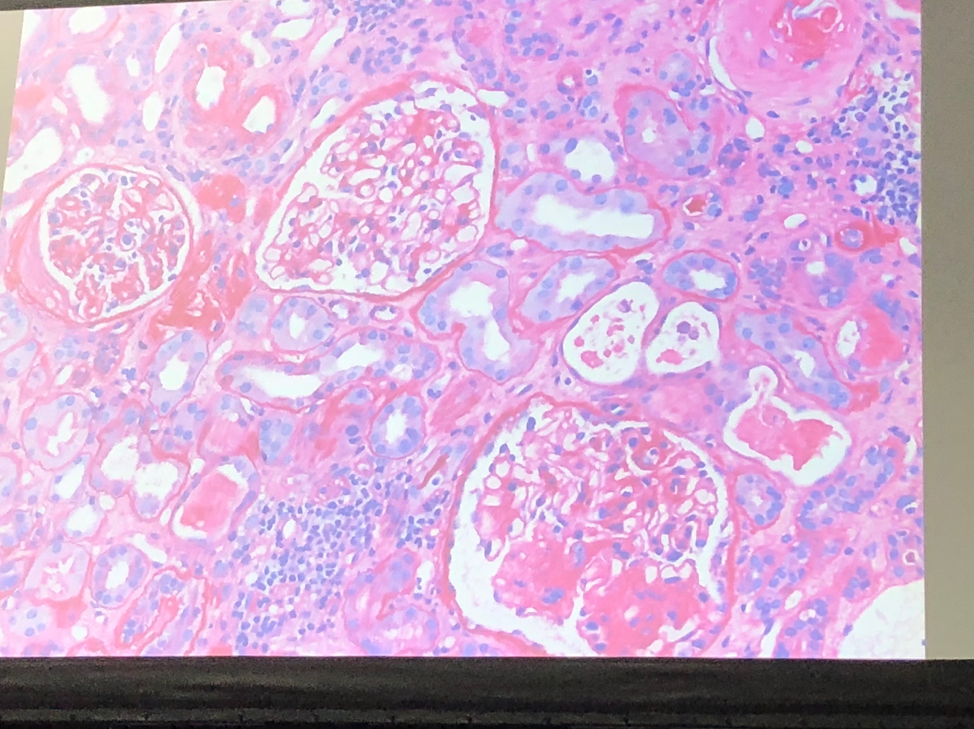 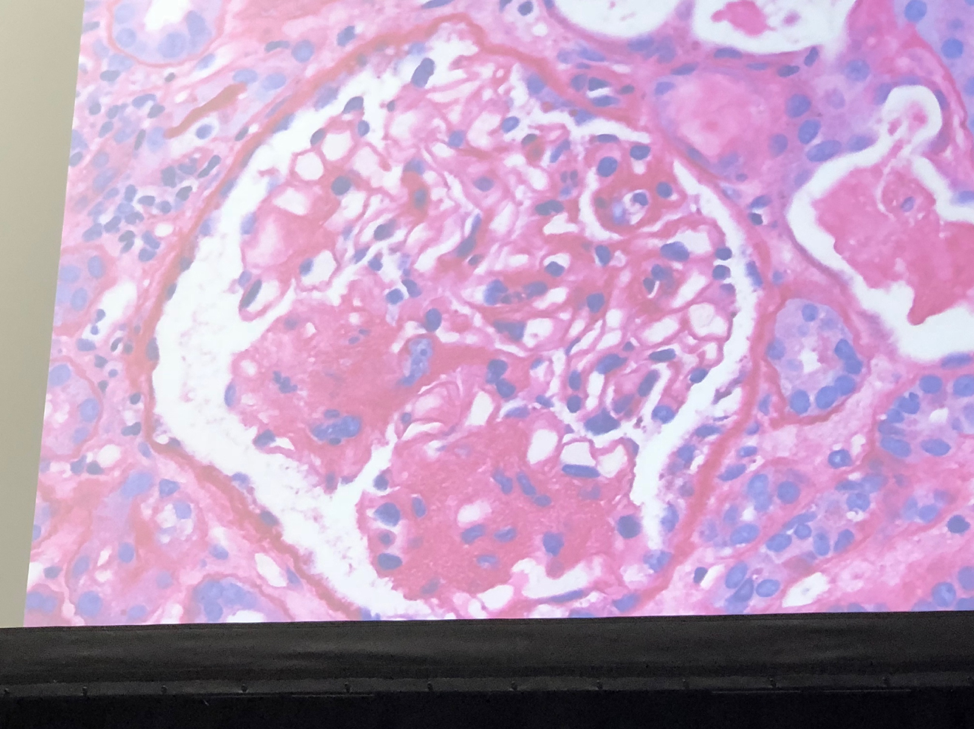 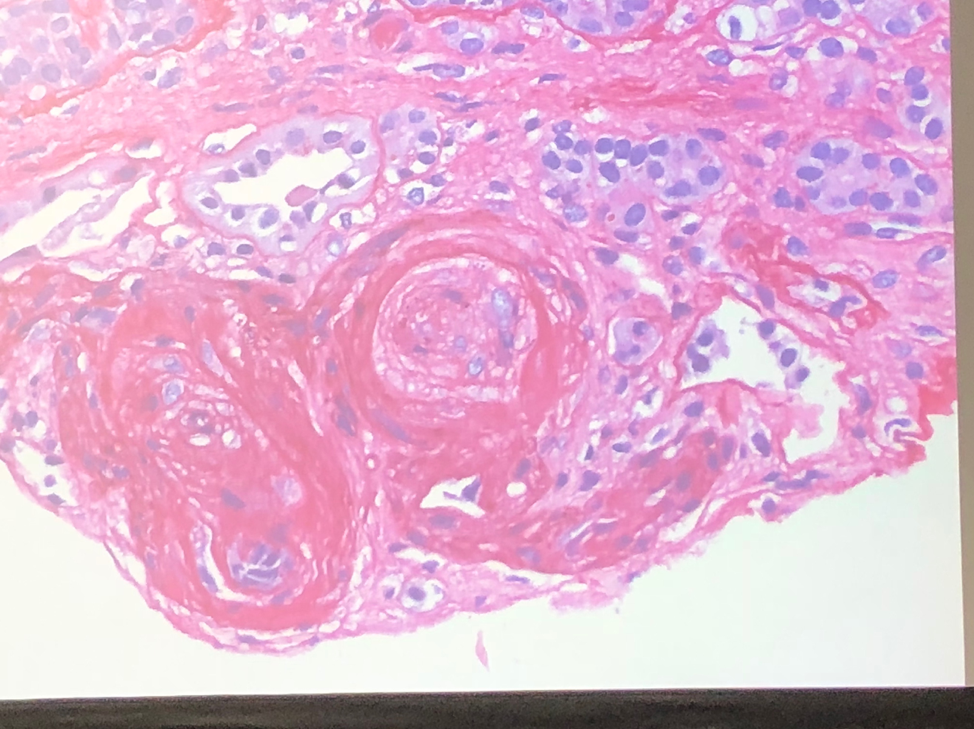 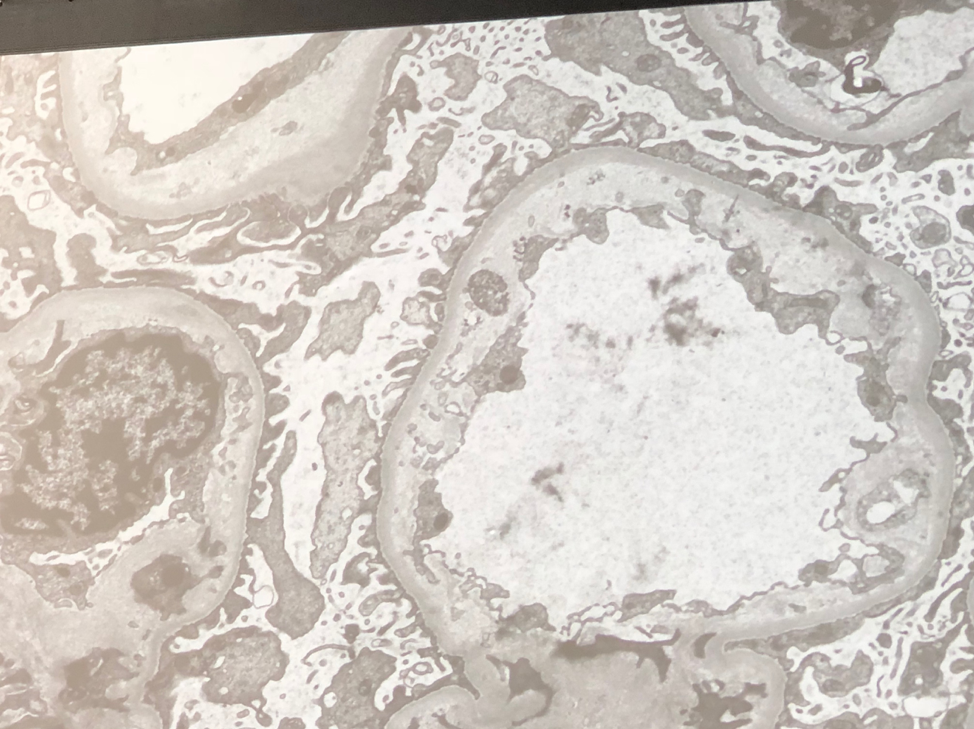 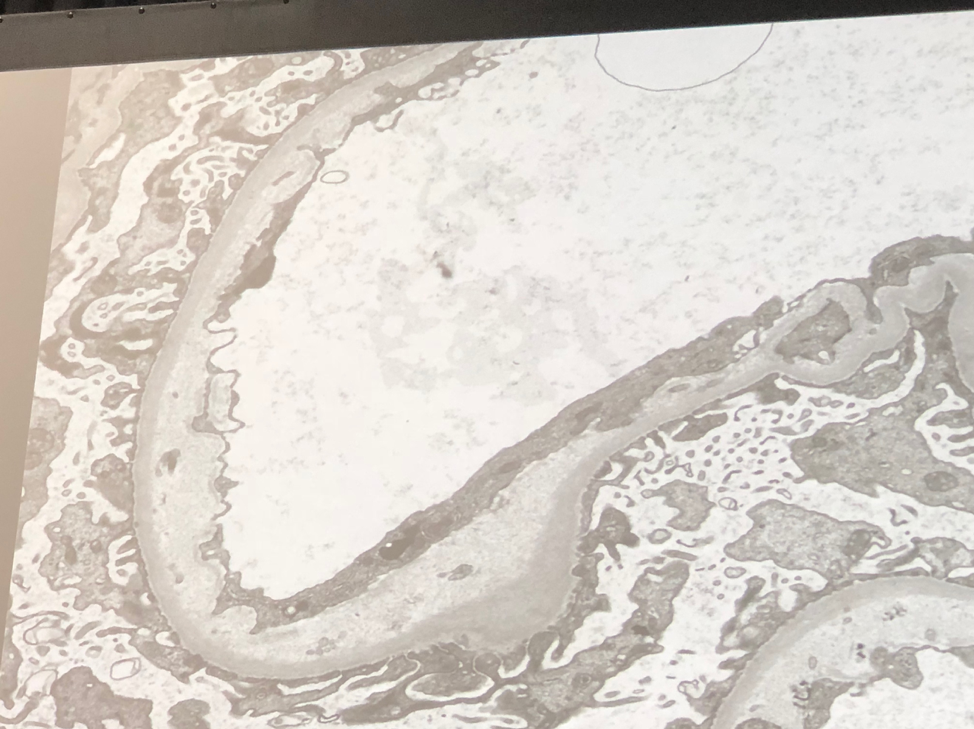 Case summary: A 76-year-old male with HTN and rheumatoid arthritis is evaluated for AKI. Is noted to have worsening anemia over the past 3 years. The Cr at baseline is 1.0 mg/dL, but has been gradually climbing over the last 3-4 months, now up to 2.1 mg/dL. History is significant for NSAID use, 30 pound weight loss, and arthralgias. Medications included naproxen, plaquenil, and Tamsulosin.

Physical exam: The patient was hypertensive to 153/86 and appeared cachectic, but he had no edema or joint abnormalities.

Lab testing: Urinalysis revealed protein and blood, which was quantified on the urine protein:cr ratio as 15 grams/gram. However, prior quantifications showed that nephrotic range proteinuria had been present for at least a year. Examination of the urine sediment revealed WBC casts.

Differential diagnosis: At this point, they were all over the place and included IgG4 interstitial nephritis, AA amyloid, minimal change from NSAIDs, and membranous nephropathy.

Kidney biopsy revealed extensive interstitial nephritis, with mostly a plasma cell infiltrate.  Silver stain did not reveal spikes or holes, but IgG immunofluorescence was positive in a granular pattern along the capillary loops. IgG4 immunostain was positive, and EM revealed subepithelial deposits. 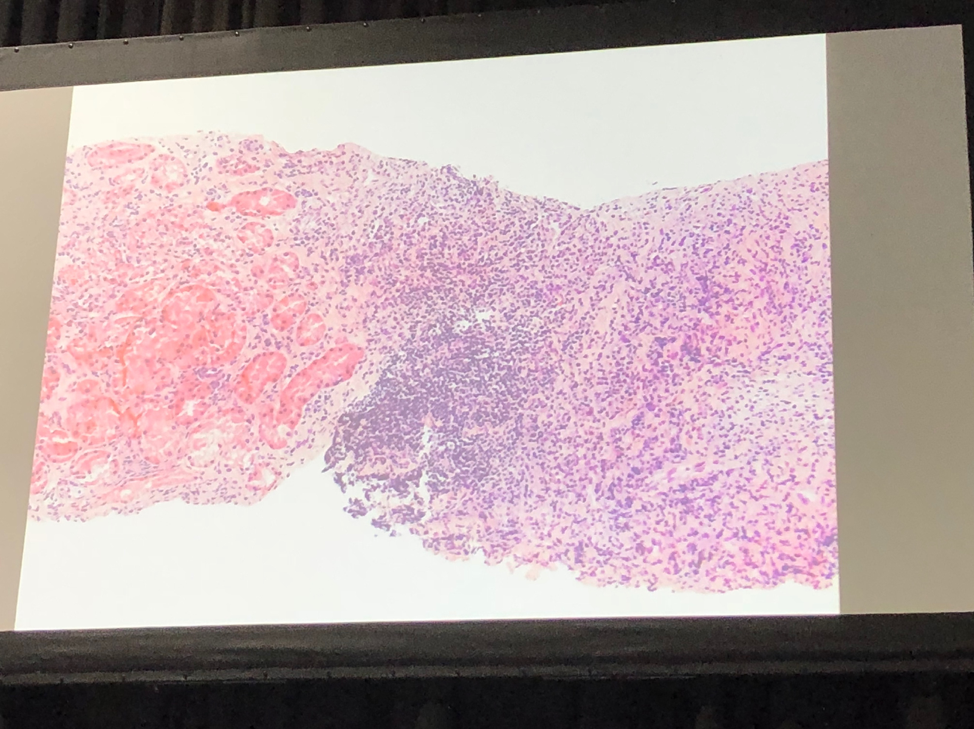 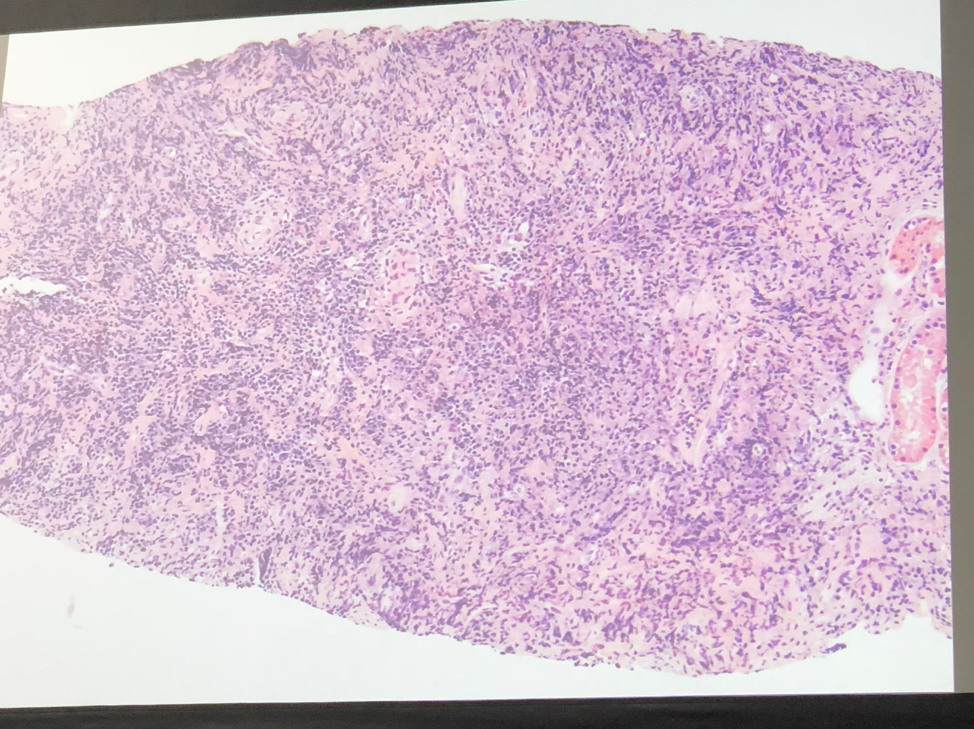 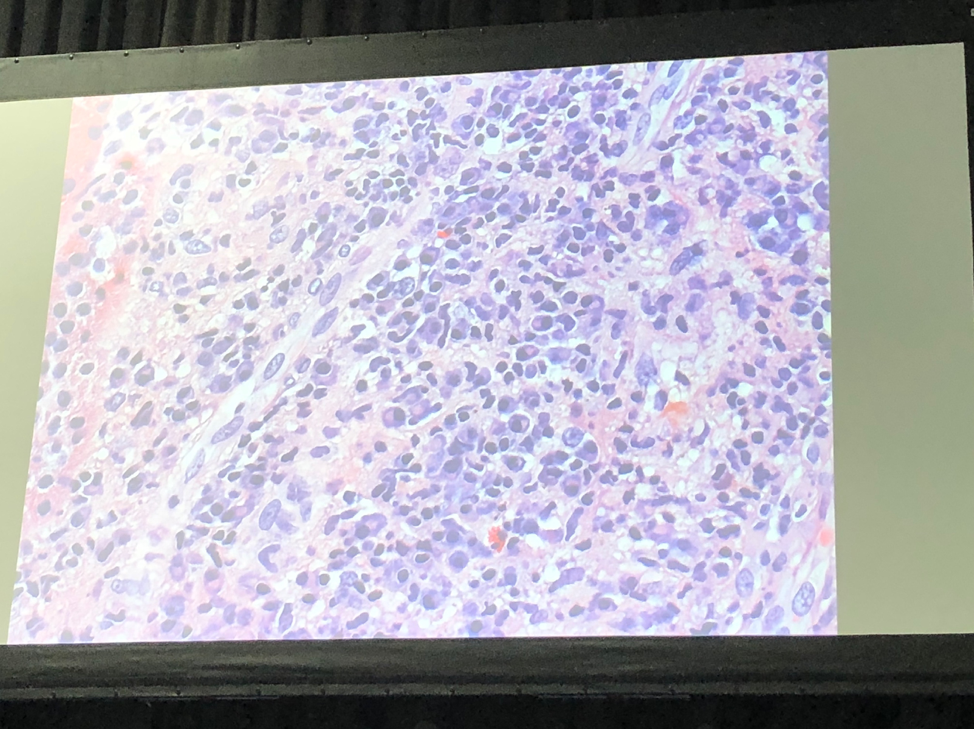 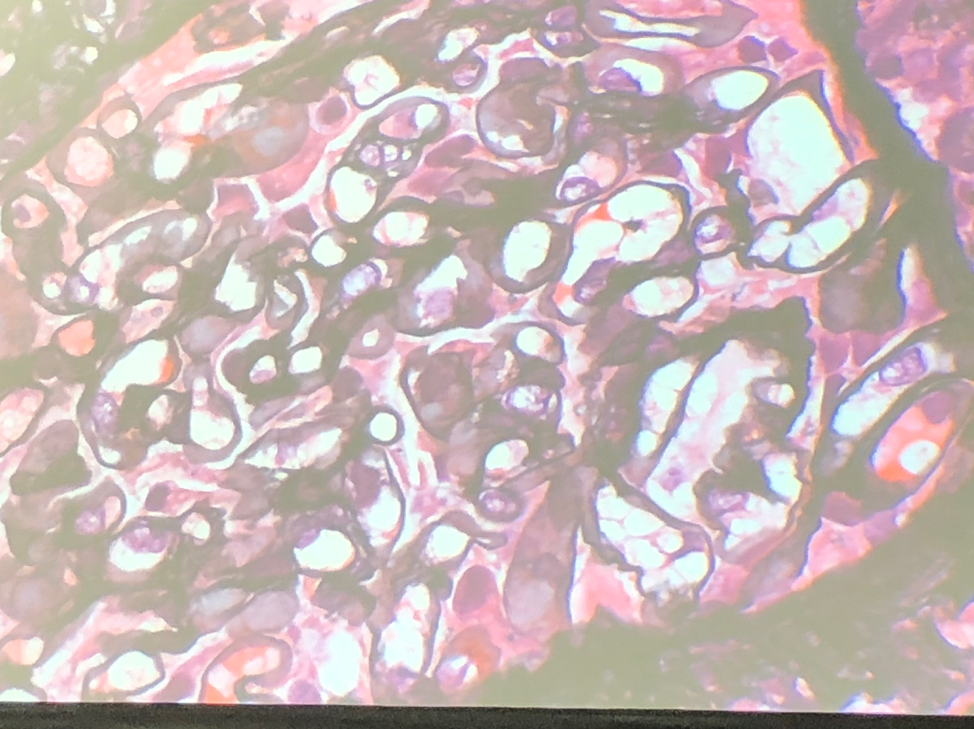 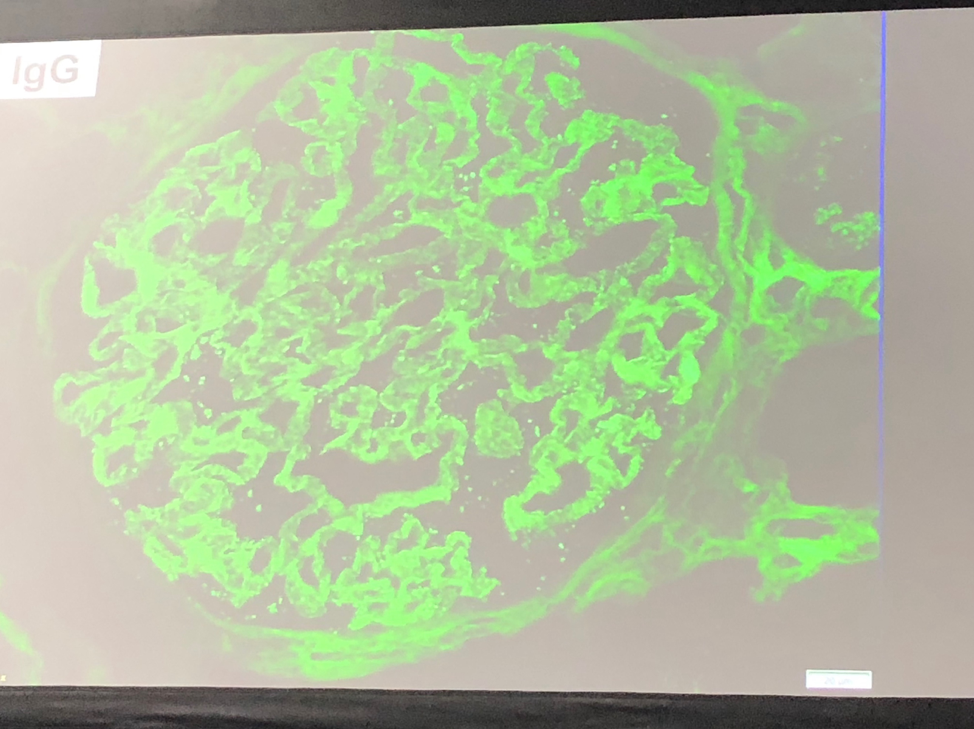 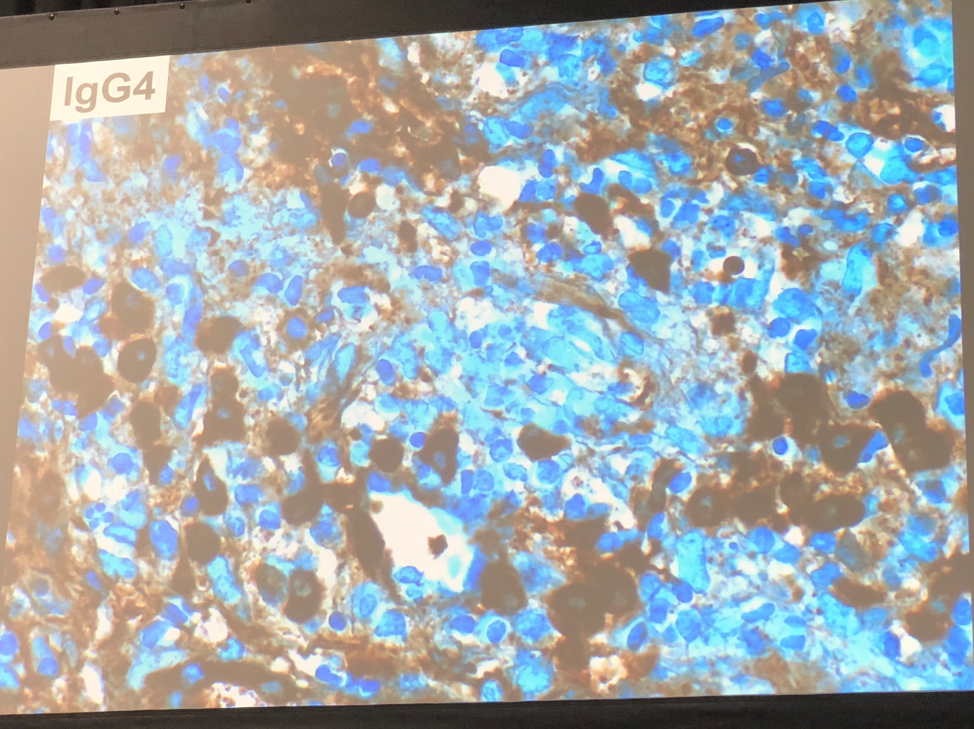 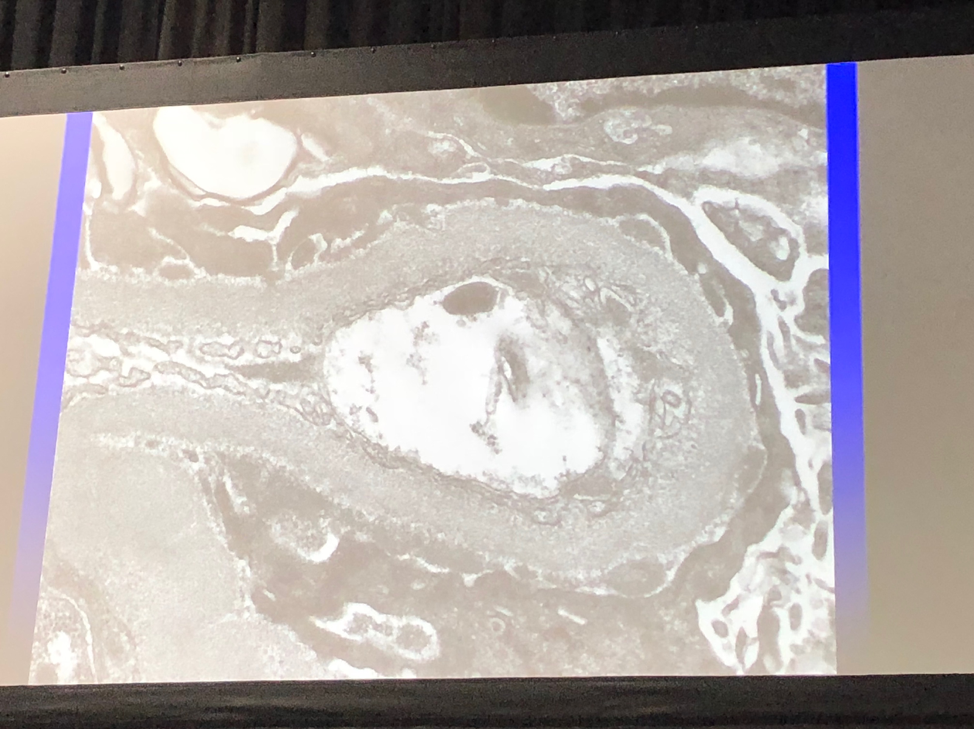 Thanks to all the fellows who participated, and I hope you enjoyed the experience!

Check out the finals coverage, which was a Jeopardy-style competition between the Arkansas Aquaporins and the Renal Rockstars.