Acute kidney injury (AKI) occurs frequently and is associated with increased morbidity and mortality in pediatric patients. Iodinated contrast has often been implicated as a risk factor for the development of AKI. The mechanisms of contrast-induced AKI (CI-AKI) are thought to be due to vasoconstriction and medullary hypoxemia, and direct renal tubular toxicity. The type, osmolality, molecular structure, and viscosity of the contrast agent have been described to determine nephrotoxicity. But recently, some studies have called into question whether CI-AKI exists. Without a clinically matched control group in many studies, the possibility that AKI may have been due to other concomitant causes such as dehydration, hypovolemia, or nephrotoxic medications is not assessable.

In a recent study published in AJKD, McDonald et al retrospectively assessed the rates of AKI, dialysis therapy, and death in pediatric patients after exposure to intravenous iodinated contrast. Although the group has previously studied the same question in adults, this is the first pediatric study that compared the children exposed to iodinated contrast to a control group of patients who did not receive contrast agents for a CT scan. The study included patients less than 18 years of age who had at least one serum creatinine (Scr) level pre-CT scan and one Scr level 24-72 hours post-CT scan.

An unadjusted analysis of the cohort showed that children who did NOT receive contrast had an increased risk of AKI after a CT scan. But children at higher risk for AKI are often steered away from IV contrast. Therefore, propensity score matching was done to eliminate some of the selection bias. Using propensity scores, the adjusted analyses showed no difference in the incidence of AKI, dialysis therapy, and death in patients who did and did not receive iodinated contrast.

All the 6 patients that developed KDIGO stage 3 AKI after exposure to contrast had other potential independent causes of AKI: 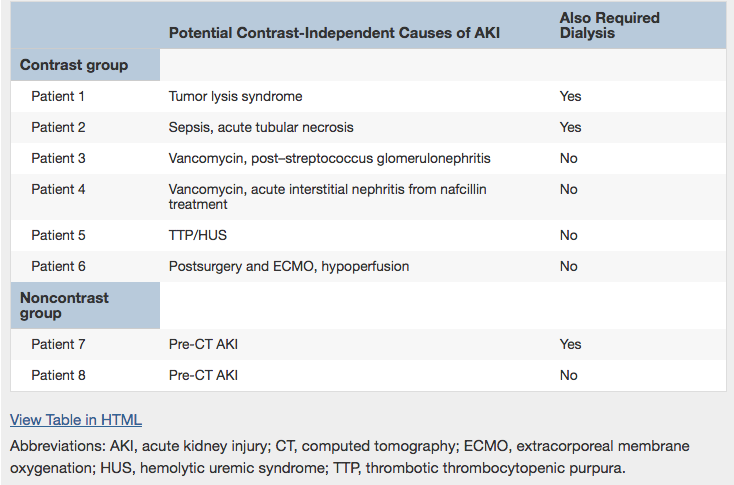 Often, patients may have important contrast-enhanced tests or procedures delayed or even avoided due to the perceived risks. McDonald et al suggest that those risks may be overstated. In the future, larger pediatric studies, especially in patients with pre-existing renal dysfunction and with exposure to various contrast agents, are needed to assess the true risk for post-contrast AKI.