Authors: High ammonia levels are quite rare outside of cirrhosis. The liver has such an astounding functional reserve and a capacity to regenerate that hyperammonemia is not reported even in liver donors, who may donate up to 60% of their native liver tissue. Patients with cirrhosis and hyperammonemia have very little hepatic reserve.

In recent years, it has been increasingly recognized that ammonia is not solely responsible for the neurological symptoms of hepatic encephalopathy and that the interaction between inflammatory cytokines and products of abnormal nitrogen metabolism play an important role. This may explain the poor correlation between ammonia levels and encephalopathy in patients with cirrhosis. In addition, in cirrhotic patients, hyperammonemia probably develops relatively slowly, and then secondary changes occur in the brain, which may ultimately be irreversible.

Patients with organ transplantation are vulnerable for reasons that are markedly different from loss of functional hepatocytes, and the hyperammonemia likely develops more quickly. The liver, for the most part, has normal synthetic function in these patients and hence there are no byproducts of liver failure. While the overall number of hepatocytes is normal, the urea cycle may be affected leading to inefficient ammonia metabolism.

It is important to emphasize that hyperammonemia is very hard to recognize in this population. These are patients who are only a few days out of surgery and are being investigated because of altered mental status that sometimes precludes post-operative extubation. With most patients demonstrating normal liver function tests, serum ammonia levels are often not checked until cerebral edema is seen on imaging. One of the most important takeaway points is to have a high degree of suspicion for hyperammonemia in post-transplant patients with altered mental status.

AJKDBlog: Can you briefly take us through ammonia homeostasis – what causes it to accumulate, and how can this lead to toxicity in humans?

Authors: Ammonia metabolism is fascinating. The reason why transplant patients may be more vulnerable to developing hyperammonemia is likely the result of a ‘perfect storm’. Here is why we think so.

Ammonia is produced in the intestines, detoxified in the liver, stored in muscle, and excreted by the kidneys. The accumulation may occur due to issues in any of these steps in transplant patients.

How can ammonia homeostasis cause toxicity? Ammonia crosses the blood brain barrier as ‘ammonium ion’ by diffusion. Inflammatory cytokines and alkalemia increase ammonia transport into the brain. The astrocytes in the brain are neuroprotective and can detoxify ammonia through glutamine synthetase. However, the glutamine produced by that process can lead to osmotic stress and astrocyte swelling. Glutamine can also enter the mitochondria where it is metabolized back to ammonia, the accumulation of which can lead to oxidative stress and disruption of mitochondrial energy metabolism with resulting increased cerebral lactate. 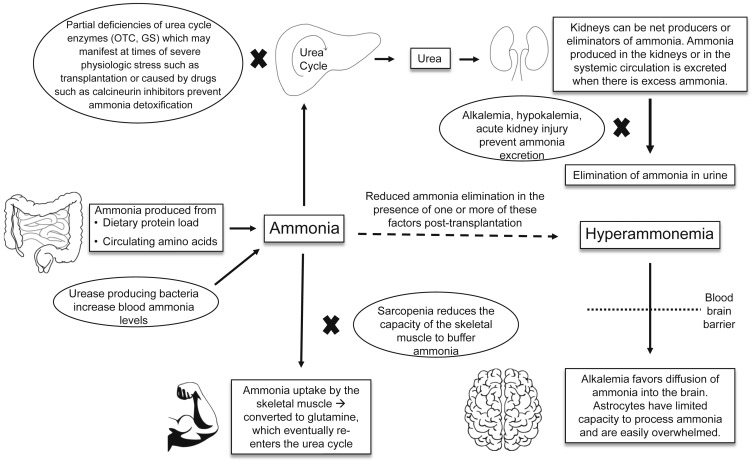 Mechanisms underlying the development of hyperammonemia in transplant recipients. Intestines are the chief ammonia producing organ. Intestinal ammonia release may be dramatically increased in the presence of urease-producing bacteria. Ammonia detoxification and elimination take place in the liver and kidneys, while skeletal muscle provides significant ammonia-buffering capacity. Urea cycle defects (inherited or induced by immunosuppression), acid-base status of a patient, and muscle mass affect the ability of a transplant recipient to deal with elevated ammonia levels in the blood, leading to increased perfusion across the blood-brain barrier and consequent astrocyte injury. Abbreviations: OTC, ornithine transcarbamylase; GS, glutamine synthetase. Figure 1 from Seethapathy and Fenves, AJKD © National Kidney Foundation.

AJKDBlog: As a nephrologist, I typically think of ammonia in the kidney as titratable acid – produced in the proximal tubule, binding a proton to form ammonium, and regeneration of bicarbonate that was lost in buffering the daily acid load. How does the kidney deal with ammonia in states of excess?

Authors: The kidneys are able to adapt to different body states, and they behave no differently in hyperammonemia. Under normal conditions, the kidneys can produce ammonia that either enters the body circulation or is excreted into the urine. This is usually in the steady state, with equal amounts excreted and conserved. However, this may be affected by the acid-base status of the organism. In acidemia, there is increased ammoniagenesis and increased excretion in the kidneys (70% excreted) and they become net excretors of ammonia. In alkalemia, the opposite happens (20% excreted), with the balance shifted towards more ammonia being released into the blood; thus, it is important to avoid alkalemia in transplant patients. Other factors regulating the renal handling of ammonia include angiotensin II and hypokalemia, both of which increase ammoniagenesis and ammonia excretion.

In a hyperammonemic state, the kidneys increase uptake of ammonia from the blood and increase its excretion, but this ability can be affected by kidney injury and extracellular pH. Even with a compensatory increase in ammonia excretion, the tubules are frequently overwhelmed in severe hyperammonemia.

AJKDBlog: Most of us are familiar with medical therapy for high ammonia levels in patients with liver disease. Can these medications also be used safely in patients with hyperammonemia and organ transplant?

Authors: The most common and widely available medication for treating hyperammonemia is lactulose. Rifaximin, an antibiotic which is poorly absorbed in the GI tract, is another medication that has been tried and tested in hepatic encephalopathy. Medications supplementing urea cycle enzymes (ornithine aspartate and ornithine phenylacetate) were primarily developed for infants with congenital urea cycle defects and are limited by availability and cost. Because of their widespread availability, relative safety, and moderate efficacy, lactulose and rifaximin should be used as first-line agents in the non-dialytic treatment of hyperammonemia in organ transplant recipients. However, in order for these agents to work, a functionally intact bowel is required. Frequently, due to delayed diagnosis, ammonia levels are severely elevated and dialysis is required. 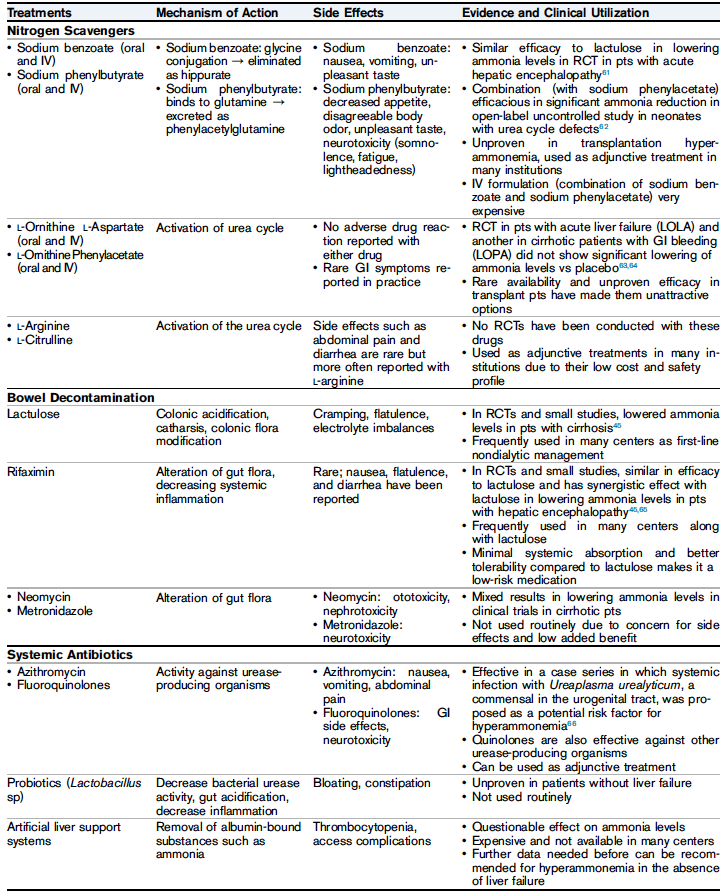 AJKDBlog: Ammonia is a small, water soluble molecule that should be efficiently cleared with dialysis. What does the literature say about extracorporeal removal of ammonia with hemodialysis and continuous therapies?

Authors: Ammonia is similar in size to urea, and there is little protein binding. Ammonia clearance is directly proportional to factors that affect urea clearance such as blood flow, dialysate flow, and dialyzer surface area. As would be expected, conventional hemodialysis (HD) clears ammonia more efficiently than continuous renal replacement therapy (CRRT). While there are no head-to-head studies comparing both modalities, there are certain things to consider:

In a hemodynamically stable patient with severe cerebral edema/impending herniation (and presumably very high ammonia levels), rapid ammonia removal should be the goal. The easiest way to achieve this would be sto start the patient on HD. If the patient is hemodynamically unstable, or if the transplant is only a few days old or the ammonia level is <500 μmol/L without cerebral edema, CRRT would be preferred and would perhaps be graft-protective. The continuous ammonia removal and the lack of rebound increase in ammonia levels seen with HD make CRRT the preferred option. 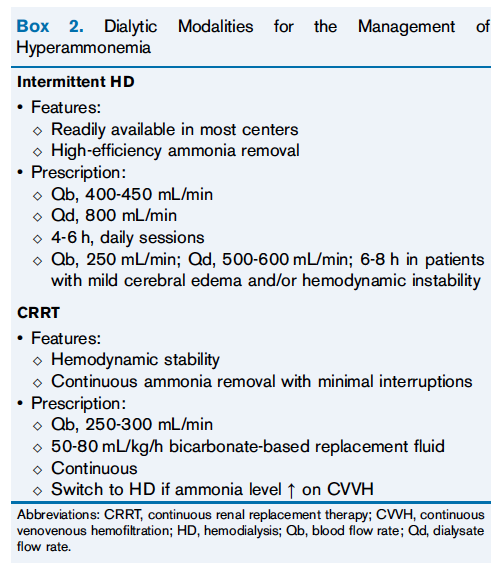 AJKDBlog: Thank you both for taking the time for this interview!

Harish Seethapathy is an AJKD Editorial Intern. Follow him @BetterCallSeeth.