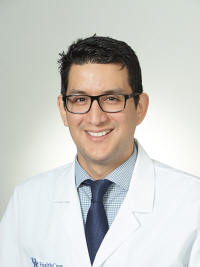 Javier Neyra is Assistant Professor of Medicine and Director of the Critical Care Nephrology program at the University of Kentucky. His research focuses on AKI and includes early detection, risk-stratification, renal replacement therapy, mechanisms of kidney recovery, and progression of CKD.

“To know what you know and what you do not know, that is true knowledge.”

An area of increasing attention among surgical patients is perioperative fluid balance and inflammation. In patients undergoing thoracic surgery, larger intraoperative fluid balance is associated with the development of acute lung injury and mortality. However, the optimal fluid management strategy among critically ill surgical patients continues to be a topic of debate. In a randomized controlled trial of 100 patients undergoing cardiac surgery, researchers reduced ICU length of stay (LOS) and post-operative complications using individualized early goal-directed hemodynamic therapy guided by stroke volume variation, cardiac index, and optimized global end-diastolic volume index. In the control group, hemodynamics were monitored with mean arterial and central venous pressures. Interestingly, the intervention arm received higher volume of crystalloids and colloids during surgery and also higher volume of colloids but not crystalloids during the ICU stay when compared to controls.

Acute kidney injury (AKI) affects almost half of critically ill surgical patients and is associated with increased morbidity and mortality. Preventing AKI and optimizing AKI care is thus of critical importance to mitigate its occurrence, progression and short- and long-term consequences.

Does earlier initiation of KRT in critically ill surgical patients with AKI allow for rapid optimization of volume status and lead to improved outcomes? Is there a role for convective clearance to ameliorate inflammation by non-selective removal of inflammatory cytokines?

The HEROICS (High Volume Veno-venous Hemofiltration Versus Standard Care for Post-cardiac Surgery Shock) study, a multicenter randomized trial, enrolled 224 patients with severe shock requiring high dose catecholamines within the first 24 hours post-cardiac surgery. Participants were randomized to either early (within 48 hours of study entry) high volume continuous hemofiltration (80 mL/kg/h) for 48 hours followed by continuous venovenous hemodiafiltration (CVVHDF) or “standard care.” In the standard care arm, CVVHDF (dose <35 mL/kg/h) was initiated only if creatinine increased >4 mg/dL or >3 times the preoperative creatinine, urine output <0.3 mL/kg/h for 24 hours, urea >36 mmol/L, or if life-threatening hyperkalemia occurred. Participants randomized to high volume hemofiltration experienced shorter duration of catecholamine administration and more rapid resolution of metabolic acidosis. However, there was no difference in ventilator free days, ICU LOS, or survival at 30 days. Similar to other KRT timing studies, 43% of participants in the standard arm never required KRT. The study was stopped for futility after the enrollment of only two thirds of the intended participants. A more recent study by Park et al randomized 212 critically ill patients with sepsis-associated AKI requiring CRRT to receive CVVHDF (mixed diffusive and convective clearance) with 40 vs. 80 mL/kg/h of effluent dose. This study also showed no difference in the primary outcome of 28-day mortality (64.5% vs. 65.7%, p=0.9, respectively) or secondary outcomes of 90-day mortality, ICU or hospital LOS and recovery of kidney function between both groups. Importantly, this study showed a significant within-subject reduction in blood levels of selected cytokines (IL-6, IL-8, IL-1b, and IL-10) only in the high dose group. The results of these studies and others, collectively, do not support the use of high volume hemofiltration or hemodiafiltration in patients with shock post-cardiac surgery or sepsis-associated AKI given the lack of effect on clinical outcomes such as mortality or kidney recovery, despite the observed reduction in blood levels of inflammatory markers.

The ELAIN (Early versus late initiation of renal replacement therapy in critically ill patients with acute kidney injury) trial randomized 231 critically ill patients with AKI stage 2 and plasma neutrophil gelatinase-associated lipocalin (NGAL) level greater than 150 ng/mL to either an early (within 8 hours of AKI stage 2) or delayed (within 12 hours of stage 3 AKI) continuous kidney replacement therapy (CKRT) initiation strategy. Almost all patients enrolled in this study were surgical patients. Patients treated with an early initiation strategy experienced lower 90-day mortality, shorter duration of mechanical ventilation, shorter hospital LOS, and greater kidney recovery. A strength of this study was the use of NGAL to enrich the trial with participants more likely to experience AKI progression. However, this study is limited by its single-center design and the fact that 91% of patients in the delayed initiation strategy end requiring CKRT. The findings of ELAIN have not been replicated in larger, multi-center trials. For example, a subgroup analysis of nearly 1,000 critically ill surgery patients in STARRT-AKI revealed no difference in all-cause mortality at 90 days, although one should recognize that the study design of STARRT-AKI and ELAIN were different, the former using the principle of clinical equipoise (absence of any circumstances that would mandate either immediate initiation of RRT or a deferral of such therapy because of likelihood of recovery of kidney function) prior to randomization and the latter using a biomarker of kidney damage (NGAL) for enrichment, among other differences.

Defining the optimal time to start KRT based on both observational and trial data is difficult, particularly as the definition of “early” varies across studies. Most nephrologists would agree that the clinical decision to initiate KRT should not only be based on serum creatinine values. However, serum creatinine has been one of the primary indicators that defines entry criteria into trials examining KRT initiation. Trials repeatedly appear to suggest that initiating KRT simply according to AKI stage may not be appropriate for all patients and potentially harmful in some patients. The potential benefits and harms of initiating KRT versus continued conservative management must be considered for each individual patient, taking into consideration the acute illness trajectory, comorbid illness, the potential risks of the KRT intervention, and individual patient goals. Further, the degree and impact of fluid overload and metabolic derangements may vary between patients, warranting a personalized medicine approach. 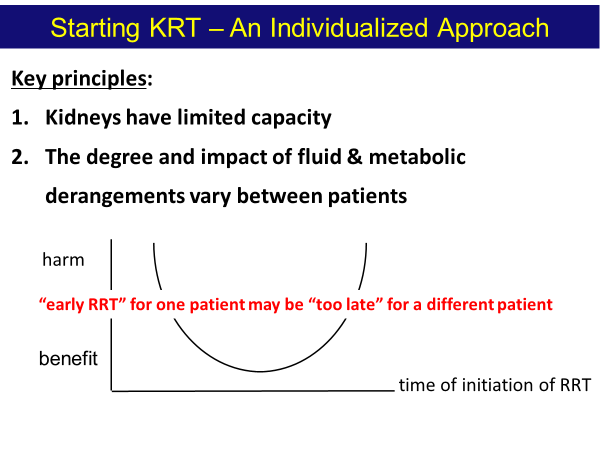 In conclusion, current evidence does not support that surgical patients could benefit from earlier and more aggressive application for KRT, although a role for early volume optimization in selected patients with worsening fluid overload and suboptimal response to diuretics remains plausible. One should therefore recognize that one size does not fit all and that “early” KRT for one patient may be “too late” for a different patient according to specific solute and volume control goals. Future studies should consider moving away from primarily creatinine-based definitions of eligibility for “early” KRT and seek to develop and validate risk-classification tools to identify patients that could potentially benefit from early interventions such as net ultrafiltration rate (fluid removal with CRRT) to mitigate adverse effects of fluid overload. Further, implementation of multi-phenotype biomarker interrogation, bedside ultrasonography/non-invasive hemodynamic monitoring, and functional nephron testing such as the furosemide stress test could enrich the study population with participants most likely to progress to AKI requiring KRT that could benefit from “early” interventions. The current recognition of the need for a personalized approach of KRT delivery to critically ill patients is a true advancement in ICU nephrology that deserves further study and serious consideration in the NephMadness selection.