A recent AJKD Core Curriculum from Vondracek et al tackles the broad topic of pharmacotherapy.  In this piece, the authors discuss basic principles and give a comprehensive overview of several classes of commonly used medications that require an awareness of dose adjustments in the setting of patients with kidney disease.  Pharmacokinetics and pharmacodynamics are important considerations in drug selection and dosing in patients with chronic kidney disease (CKD).  It has been said that “pharmacokinetics” refers to what the body does to a drug, while “pharmacodynamics” is what a drug does to the body. The former refers to alterations in drug absorption, distribution, protein binding metabolism, and elimination. 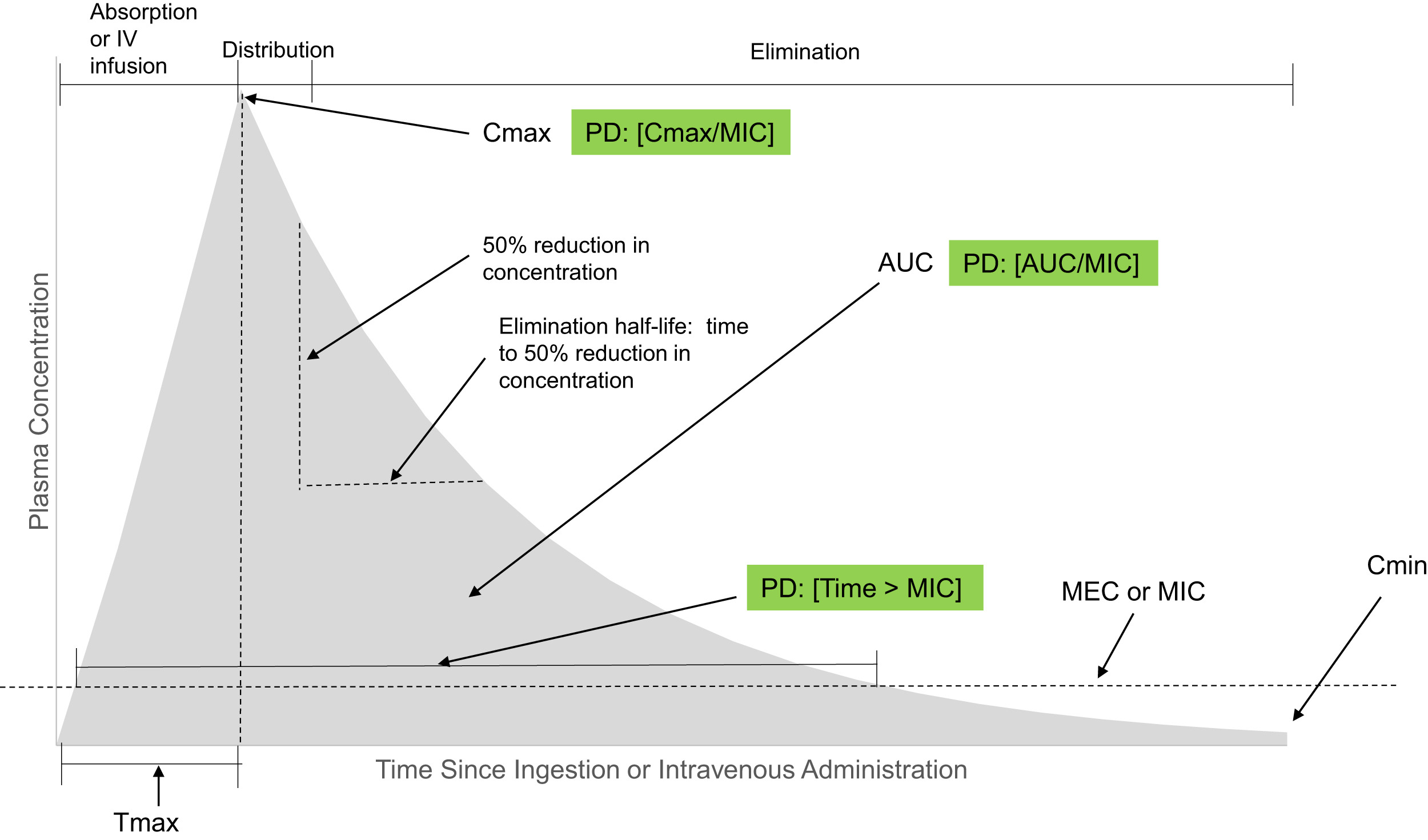 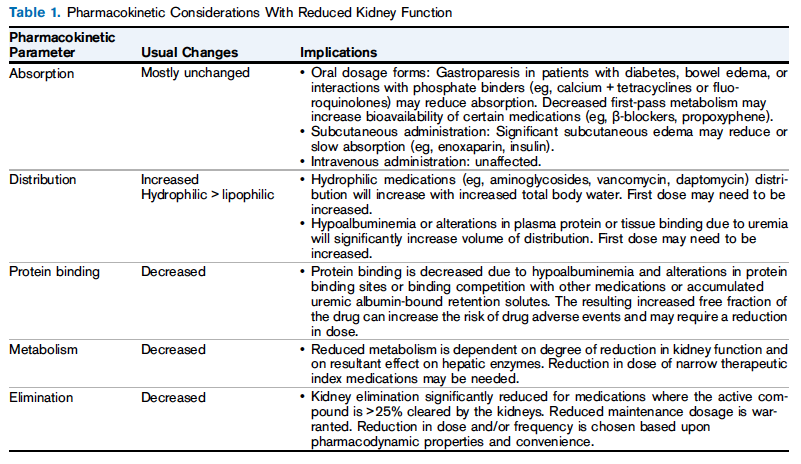 One query that clinicians commonly encounter in the realm of pharmacology and drug dosing–particularly in patients with decreased kidney function–is “which is the correct equation to use when dosing medications?” The variety of equations available nowadays to estimate kidney function and the various recommendations given by different organizations have added more complexity to this conundrum.  It should be noted that the use of estimated glomerular filtration rate (eGFR) for drug dosing remains controversial, with no universally accepted estimation. The authors note that some studies overestimate kidney function when eGFR is used, particularly in elderly individuals.  For patients requiring kidney replacement therapy, the “dialyzability” often requires adjustments in drug dosing.  This is influenced by factors such as volume of distribution and protein binding, among others. As compared to peritoneal dialysis (PD), there is more dialyzability associated with intermittent hemodialysis (HD).

Below is a brief yet comprehensive literature review of some of the medications that are commonly used in everyday practice and also highlight the effects of pharmacokinetics and pharmacodynamics as they particularly apply to patients with underlying CKD:

Anticoagulants have gained attention based on recent trials, but a grey area still exists in patients with CKD G4-G5 and in those on dialysis because most trials excluded these patients when evaluating the efficacy and safety of warfarin and direct-acting oral anticoagulants (DOACs).  Patients with CKD are at higher risk for non-valvular atrial fibrillation (NVAF), venous thromboembolism, and stroke.

All DOACs are renally excreted with dabigatran (80%) being the most, and apixaban (25%) being the least. Based on limited data and small studies, it is recommended that in patients with NVAF, using apixaban at standard dose (5mg BID) has similar efficacy and a better safety profile when compared to warfarin in CKD G4-G5 and hemodialysis. In regards to the injectable anticoagulants, unfractionated heparin (UFH) and argatroban have been shown to be the safest in CKD G4-G5 patients, since these are primarily metabolized and eliminated by the liver. 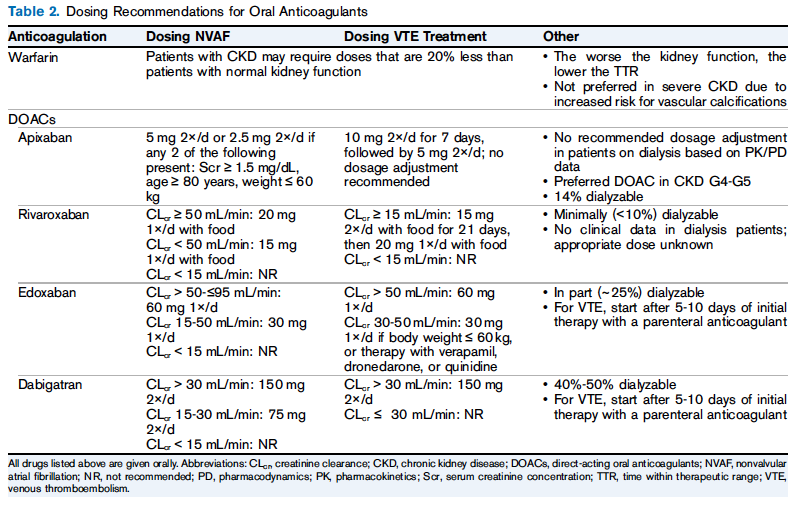 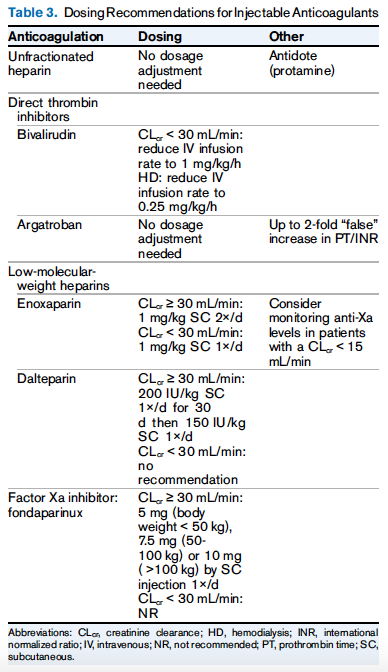 Antidiabetic agents have evolved to be used not just in managing hyperglycemia, but for their protective effects on kidney and heart diseases as well. For many years, Angiotensin Converting Enzyme inhibitor (ACEi) and Angiotensin Receptor Blocker (ARBs) were the mainstay of therapy for reducing the progression of CKD. Many trials adding on sodium-glucose cotransporter-2 inhibitors (SGLT2i) for the management of CKD G1-G3 in patients with or without diabetes have shown increased benefits.  As a result, the American Diabetes Association recommends the use of SGLT2i in patients with diabetes and CKD G1-G3 and albuminuria to reduce the risk of CKD progression, cardiovascular events, or both. Data on the effects of SGLT2i in CKD G4-G5 are still lacking.

Glucagon-like peptide-1 (GLP-1) agonists and Dipeptidyl peptidase-4 (DPP-4) inhibitors have shown some reductions in the progression of albuminuria in trials for cardiovascular outcomes, but the effect on changes in GFR or kidney failure is not clear. The advantages of the GLP-1 agonists and DPP-4 inhibitors are that they can be used in CKD G4-G5 with appropriate dosage adjustments. 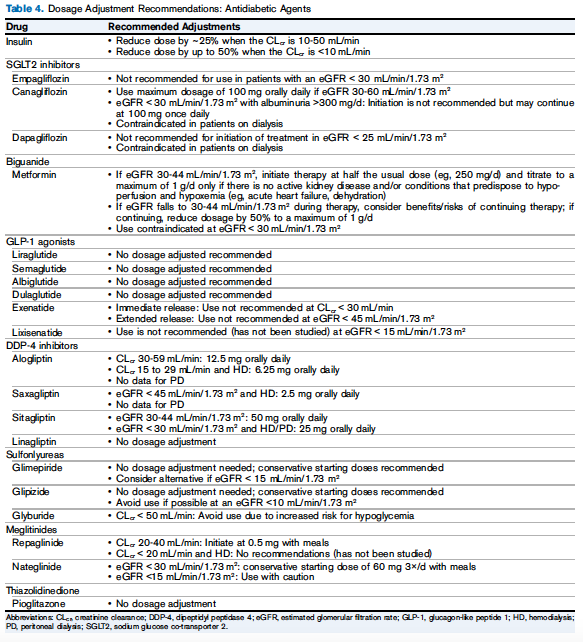 Anti-hypertensive management in kidney disease is a broad topic, to be sure.  First line antihypertensive in patients with CKD without albuminuria are dihydropyridine calcium channel blockers (DP-CCB) and thiazide diuretics. They are used as either as monotherapy or together with RAAS blockade. The ACCOMPLISH trial showed that the combination of ACEi and DP-CCB was better than ACEi and thiazide at reducing cardiovascular and CKD progression.

The RAAS blockade is preferred in patients with CKD and albuminuria but the potential side effect of hyperkalemia needs to be accounted for. The effects of continuation or discontinuation of RASS therapy in CKD G4-G5 are controversial. An ongoing open-label randomized controlled trial (STOP-ACEi) will educate us more on this topic.

Beta-blockers are usually an “add-on therapy” unless there is concomitant heart failure or ischemic heart disease, in which they may be a first line agent. The recent Hypertension in Hemodialysis Patients treated with Atenolol or Lisinopril (HDPAL) trial was shown to have superior blood pressure reduction and a reduction in cardiovascular event rates when compared to lisinopril.

Mineralcorticoid receptor antagonist (MRAs), spironolactone, and eplerenone are used in patients with resistant hypertension without hyperkalemia. Small studies have shown benefits of reduction in proteinuria when combined with RAAS therapy and also a reduction in cardiovascular mortality in patients on dialysis. Trials comparing spironolactone to placebo in patients on dialysis looking at major adverse cardiovascular events are ongoing.  The same caveat of potentially worsening hyperkalemia needs to be considered in this population.

The nephrologist occupies a critical role in the appropriate dosing of different medications in patients with underlying kidney dysfunction. A complete and thorough understanding of the interplay between pharmacokinetics, pharmacodynamics, and pharmacogenomics is of utmost importance, and needs to be in the knowledge armamentarium of all clinical nephrologists who are faced with these issues on an everyday basis. 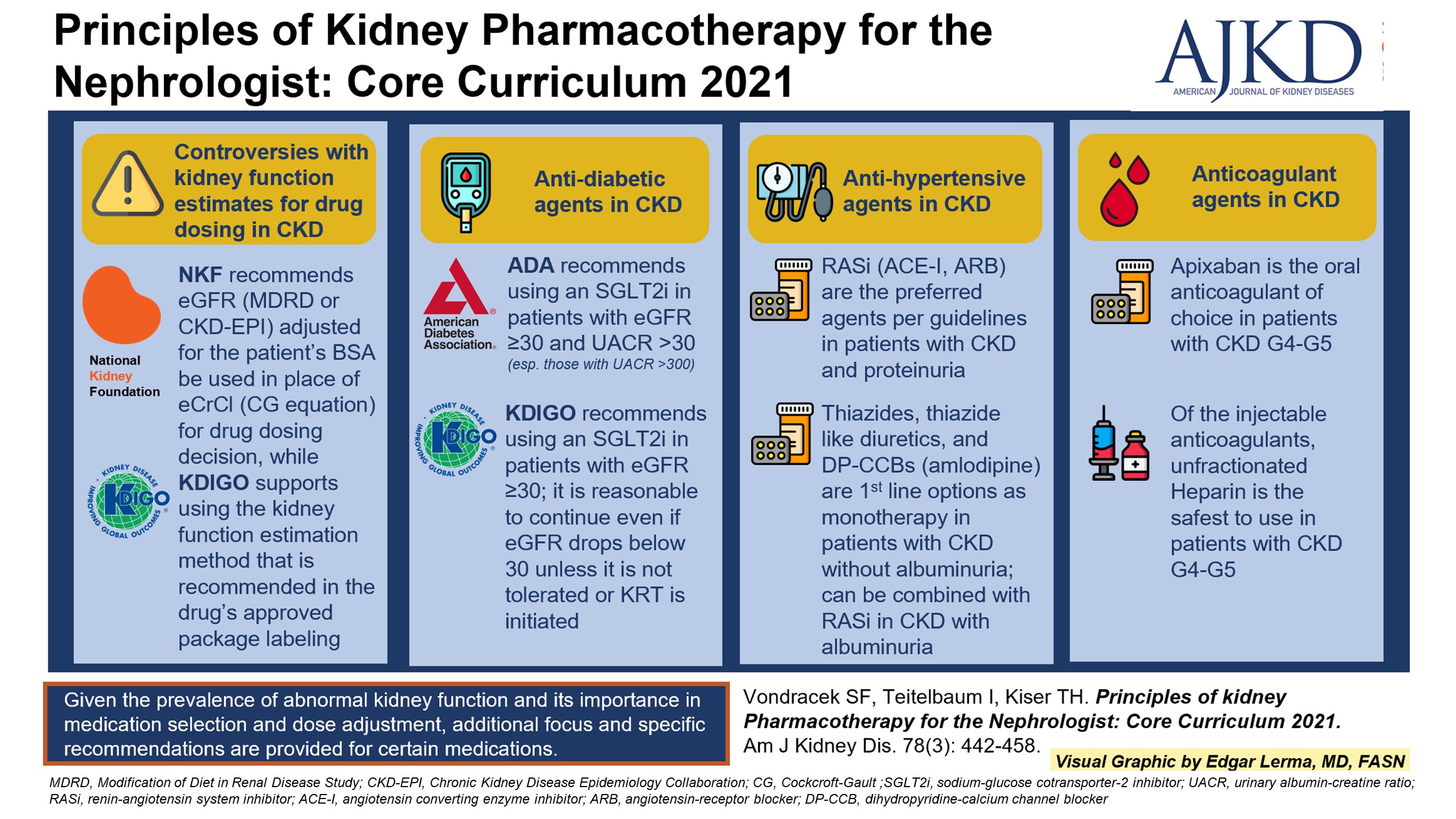 Articles in the Core Curriculum aim to give trainees in nephrology a strong knowledge base in core topics in the specialty by providing an overview of the topic and citing key references, including the foundational literature that led to current clinical approaches.