Dr. Tiffany Caza is a nephropathologist at Arkana Laboratories.  She is passionate about kidney disease research and nephropathology education.

In patients with acute tubular injury, characteristics of intratubular casts assist in determining the etiology of disease. Light chain casts have an atypical morphology with a fractured appearance or giant cell reaction, are often PAS-pale, and demonstrate restriction for a single immunoglobulin light chain. Presence of light chain casts is diagnostic of multiple myeloma (a ‘myeloma-defining event’). Red blood cell casts are seen in the setting of an active glomerulonephritis or in anticoagulant-associated nephropathy. White blood cell casts can indicate an ascending infection (i.e. pyelonephritis) or can sometimes be seen in acute interstitial nephritis. Bilirubin casts frequently have a yellow or yellow-green hue on H & E staining and are positive with Hall’s bilirubin stain, where they have a characteristic olive green appearance and are indicative of liver failure (frequently in the setting of hepatorenal syndrome). Hyaline and Tamm-Horsfall protein within casts are PAS-positive and are typically associated with chronic injury. Pigmented granular casts can occur in the setting of myoglobin-cast nephropathy (associated with rhabdomyolysis and myoglobinuria), hemoglobin-cast nephropathy (of which occurs in the setting of intravascular hemolysis and hemoglobinuria), and rarely light chain casts can also have a granular morphology.

To work up a biopsy with pigmented granular casts within tubules, first carefully confirm that there are no light chain restricted casts under routine immunofluorescence. If there is no light chain restriction, immunohistochemical staining for hemoglobin and myoglobin can be instrumental for identifying an underlying etiology. Myoglobin casts are far more common than hemoglobin casts, however, they have indistinguishable morphology and it is recommended to examine both in each case.

Here is a representative biopsy from a patient with acute tubular injury containing pigmented granular casts. 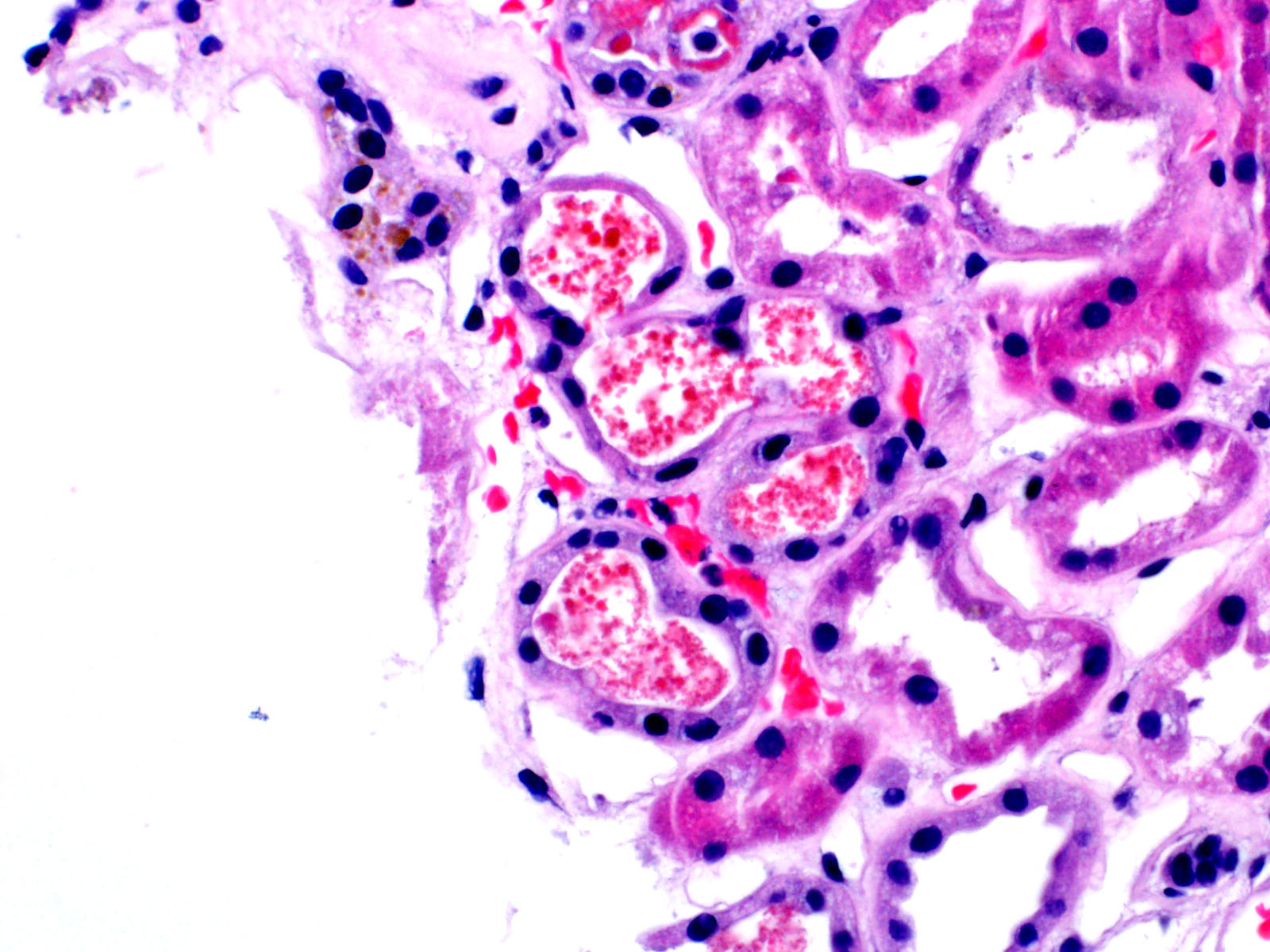 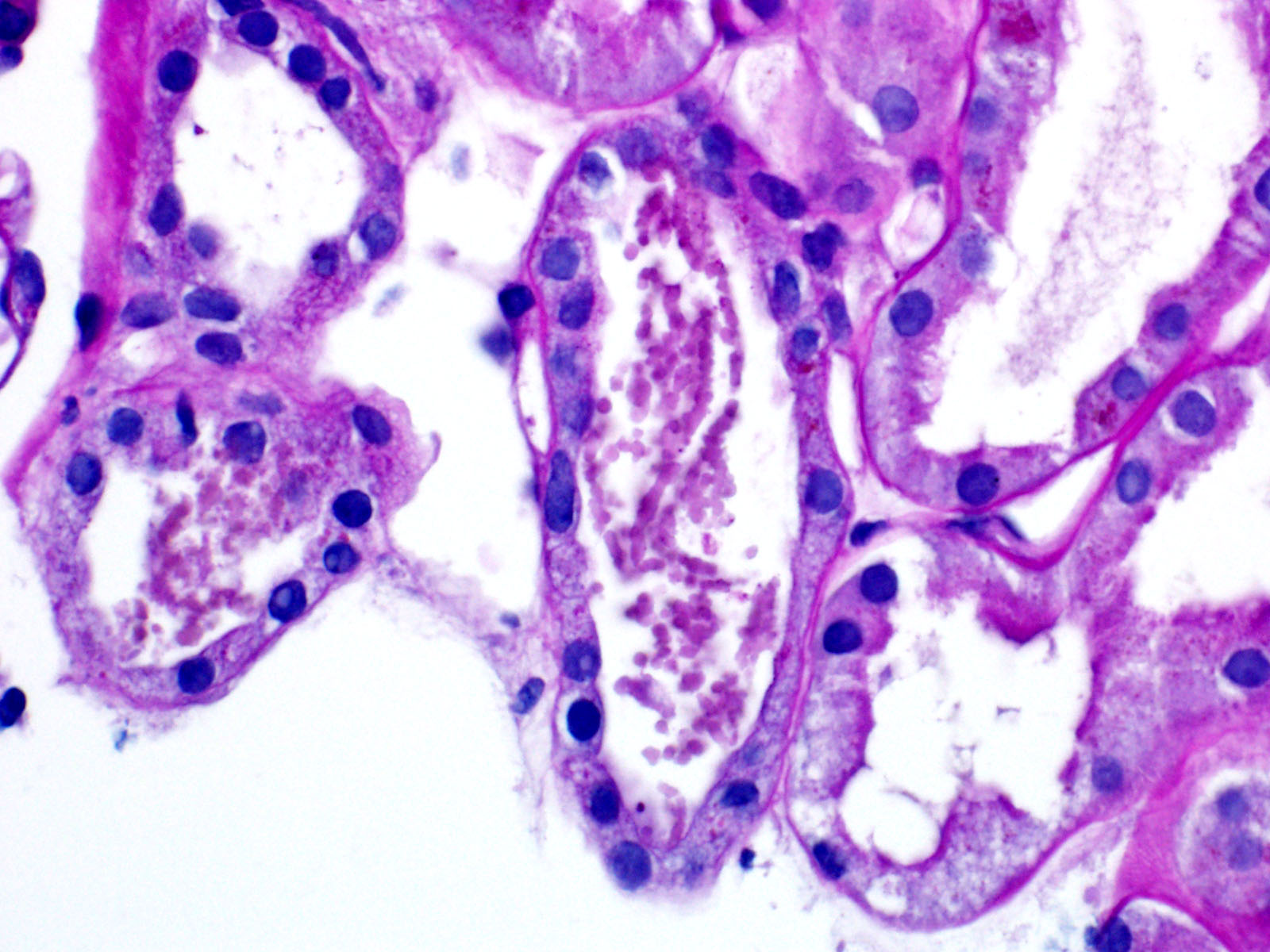 The casts can have a beaded appearance. 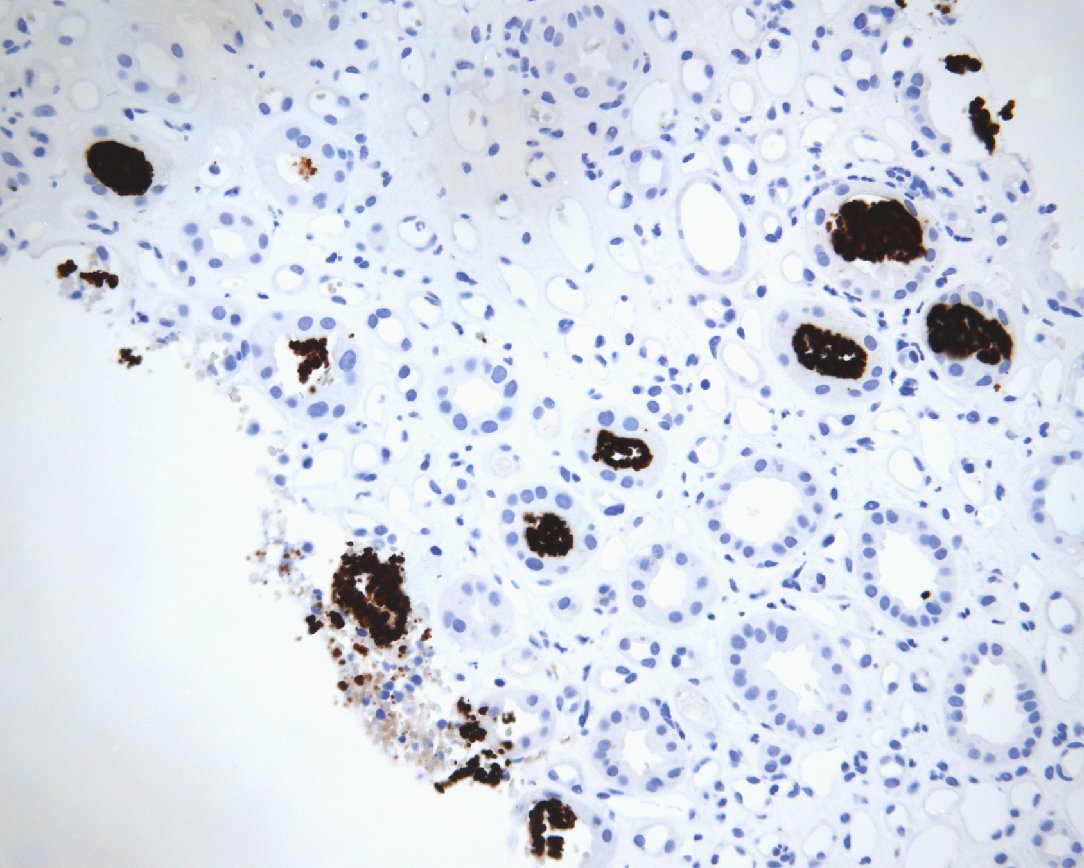 Acute tubular injury with pigmented granular casts is most frequently caused by hemoglobin or myoglobin cast nephropathy, both of which have a broad etiologic differential diagnosis.  Hemoglobin and myoglobin immunohistochemistry is recommended for all kidney biopsies containing pigmented granular or beaded casts to aid in determining an underlying cause.