Dr. Ana Cecilia Farfan Ruiz was an AJKD Editorial Intern from 2021-2022. She is currently a renal transplant fellow at the Mayo Clinic Florida and recently obtained a diploma in Clinical Effectiveness at Harvard T.H. Chan School of Public Health. She has an interest in renal transplant, glomerulonephritis, and renal disease in pregnancy. She will be using database analysis to address relevant clinical situations in kidney pharmacology and epidemiology.

Ten percent of all pregnancies are affected by hypertensive disorders, including preeclampsia. These disorders are responsible for almost ten percent of US maternal deaths. Within the severe features of preeclampsia, renal insufficiency (defined as a serum creatinine > 1.1 mg/dl or doubling of the serum creatinine when other renal diseases have been excluded) is present in between 15% and 20% of cases.

The prevalence of chronic kidney disease (CKD) in patients experiencing an episode of preeclampsia is 19% vs expected 3% in women of childbearing age. Moreover, an observational cohort study of 193,152 women in Germany investigated the risk of developing CKD after premature birth and preeclampsia. Researchers factored in preexisting comorbidities, potential confounders, and the severity of CKD, and identified premature birth and preeclampsia as independent risk factors for all CKD stages. A joint exposure of premature birth and preeclampsia was associated with an excessive maternal risk burden for CKD in the first decade after pregnancy. In a Swedish nationwide cohort study, 4.9% of the women had preeclampsia and 410 women developed end-stage kidney disease (ESKD), an incidence rate of 1.85 per 100,000 person-years. The authors found an association between preeclampsia and ESKD (HR= 4.96, 95% CI 3.89-6.32, P < 0.001), concluding that women with no major comorbidities before their first pregnancy are at 5-fold increased risk of ESKD compared with women with previous deliveries and no toxemia over a period of 16.4 years of follow up. Patients with preeclampsia have some evidence of podocyte loss and kidney endothelial injury that fails to fully recover after pregnancy in some women, likely leading to increased risk of future CKD.

While the association between CKD and preeclampsia has been established, less is known about the risk of subsequent acute kidney injury (AKI) following an episode of preeclampsia or gestational hypertension. This is what Shapiro et al aimed to assess in their recently published AJKD Original Investigation. 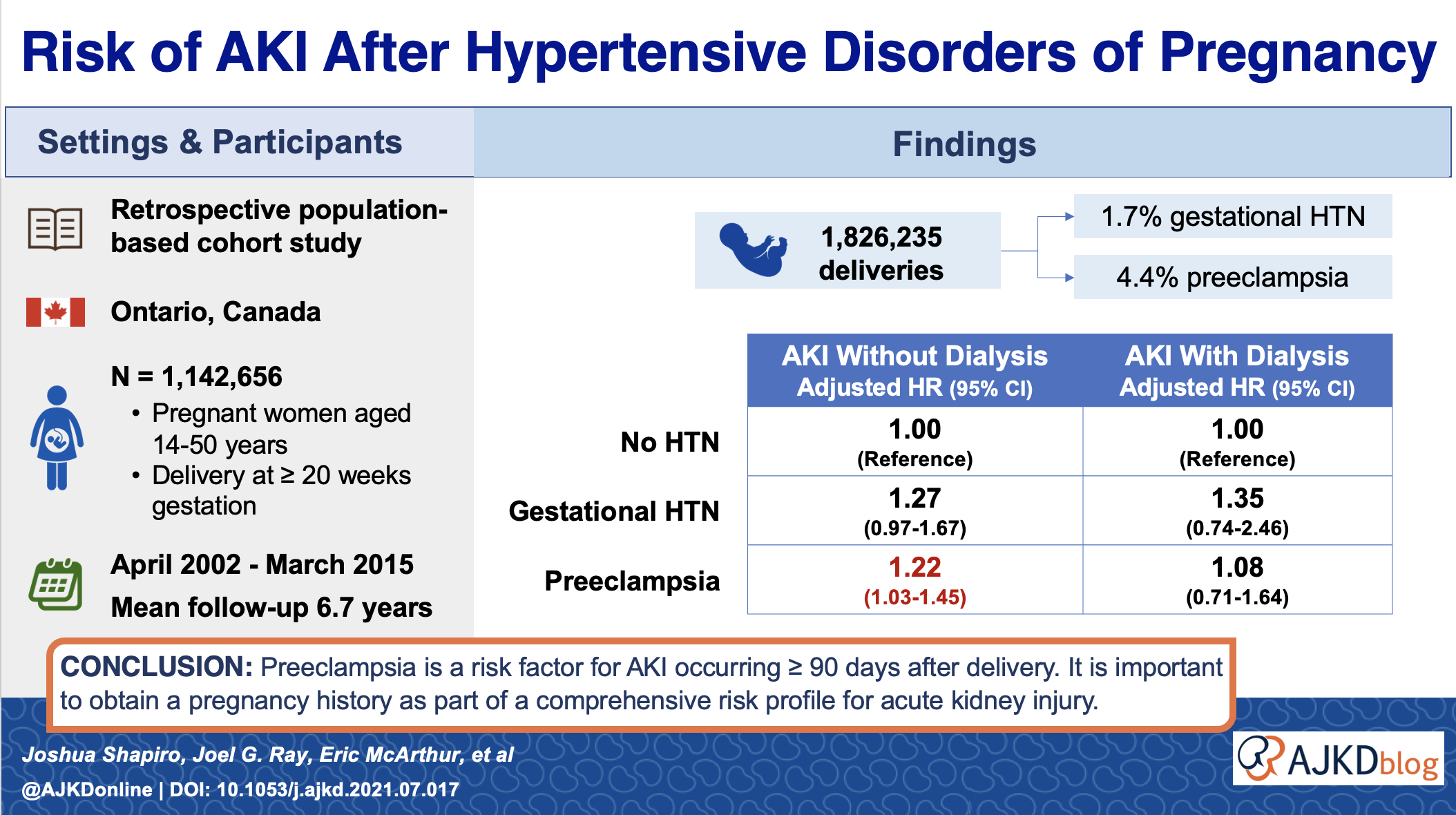 The authors evaluated the risk of AKI after resolution of hypertensive disorders in pregnancy well beyond the postpartum period using a retrospective population-based cohort study which consisted of 1,826,235 deliveries in Ontario, Canada. Of those, 1.7% were associated with gestational hypertension and 4.4% with preeclampsia. The aim of the study was to assess if a higher risk of subsequent AKI would persist in women with preexisting preeclampsia and gestational hypertension compared with those whose pregnancies were not complicated by hypertensive disorders. The main outcome was acute kidney injury with and without receipt of dialysis at 90 days or greater after delivery.

The cohort consisted of women between 14 and 50 years of age who delivered at or past 20 weeks of gestation between April 1st, 2002, and March 31st, 2015. Patients with a history of kidney transplant, dialysis, or preexisting CKD or hypertension during the 5 years before their first delivery were excluded. The primary outcome was AKI needing dialysis and episodes of AKI, only if they occurred 90 days or more after delivery. Other outcomes included kidney failure requiring dialysis or transplant, all-cause mortality, and how often women had urinalysis and/or serum creatinine testing done within 180 days of delivery.

This study highlights the importance of assessing pregnancy history while evaluating risk factors for AKI. Further, it underscores the significance of monitoring kidney function after an episode of preeclampsia or gestational hypertension. Therefore, it is crucial to develop awareness among health care providers to more adequately monitor kidney function and manage AKI risk factors in women with hypertensive disorders of pregnancy. 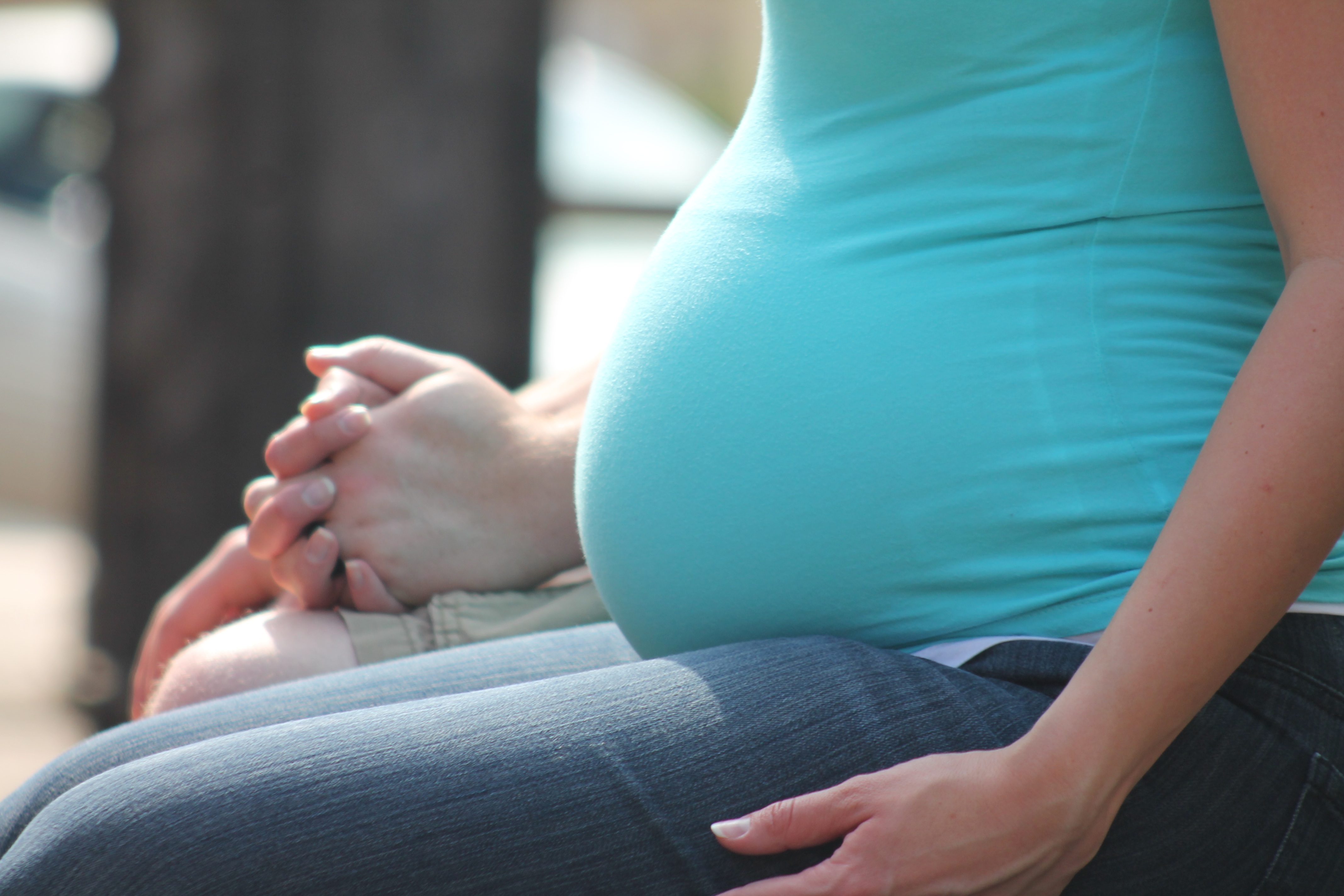