Editor’s Note: We asked authors of Original Investigations to provide short plain-language summaries that would briefly summarize what inspired their study, the basic approach taken, what was learned, and why it matters. We hope our readers will find this valuable in helping them keep up with the latest research in the field of nephrology. From the April 2022 issue:

From the authors: The KDIGO deﬁnition of acute kidney injury (AKI) is used in both clinical practice and in research. Our scoping review demonstrated that there is wide variation of practice in how this deﬁnition is applied and also a lack of transparency about how researchers have applied it. An international panel of experts in AKI was formed in an attempt to achieve consensus on how this deﬁnition should be applied. They participated in a Delphi process, and although they were able to agree on some aspects of how the deﬁnition should be implemented, there were many areas in which no agreement could be reached. We recommend that researchers clearly state how they applied the KDIGO deﬁnition for AKI when conducting studies using routinely collected health care data. 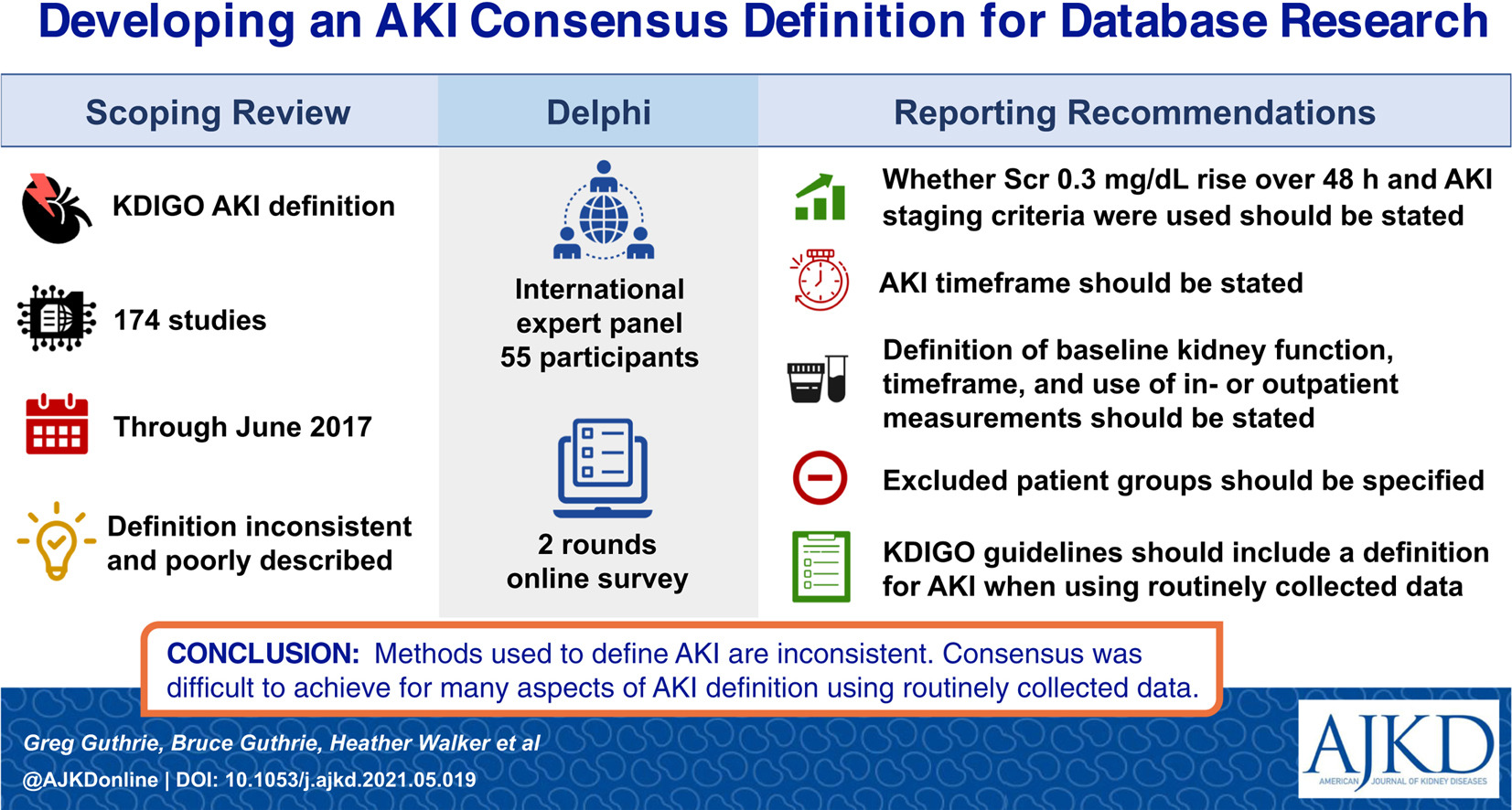 From the authors: A recently identiﬁed modiﬁed form of the protein PTEN (phosphatase and tensin homolog) has been implicated in kidney ﬁbrosis in animals and in ﬁbrotic mechanisms in human cellular studies. We wanted to see if circulating levels of this form of PTEN were associated with progression of kidney disease in American Indians with type 2 diabetes. We found that the modiﬁed form of PTEN was associated with increased risk of decline in kidney function and the onset of kidney failure. In a subgroup of participants, serum levels of modiﬁed PTEN were also associated with the severity of lesions in kidney structure, which signify early manifestations of diabetic kidney disease.

Editorial: The Biomarker Promised Land: Are We There Yet? Not Yet by Alexander L. Bullen et al [FREE]

From the authors: Previous studies have shown an increased cancer risk within the dialysis and kidney transplant populations compared with the general population. However, it is unclear whether cancer increases the risk of kidney failure. This population-based cohort study was conducted using the Korean National Health Insurance Service database and compared approximately 825,000 patients with cancer versus twice as many patients without cancer but matched on other characteristics. This study found that cancer was associated with an increased risk of kidney failure, even after adjusting for potential confounders and addressing the competing risk of death. Types of cancer that were most signiﬁcantly associated with kidney failure included multiple myeloma, leukemia, lymphoma, kidney cancer, ovarian cancer, and liver cancer. 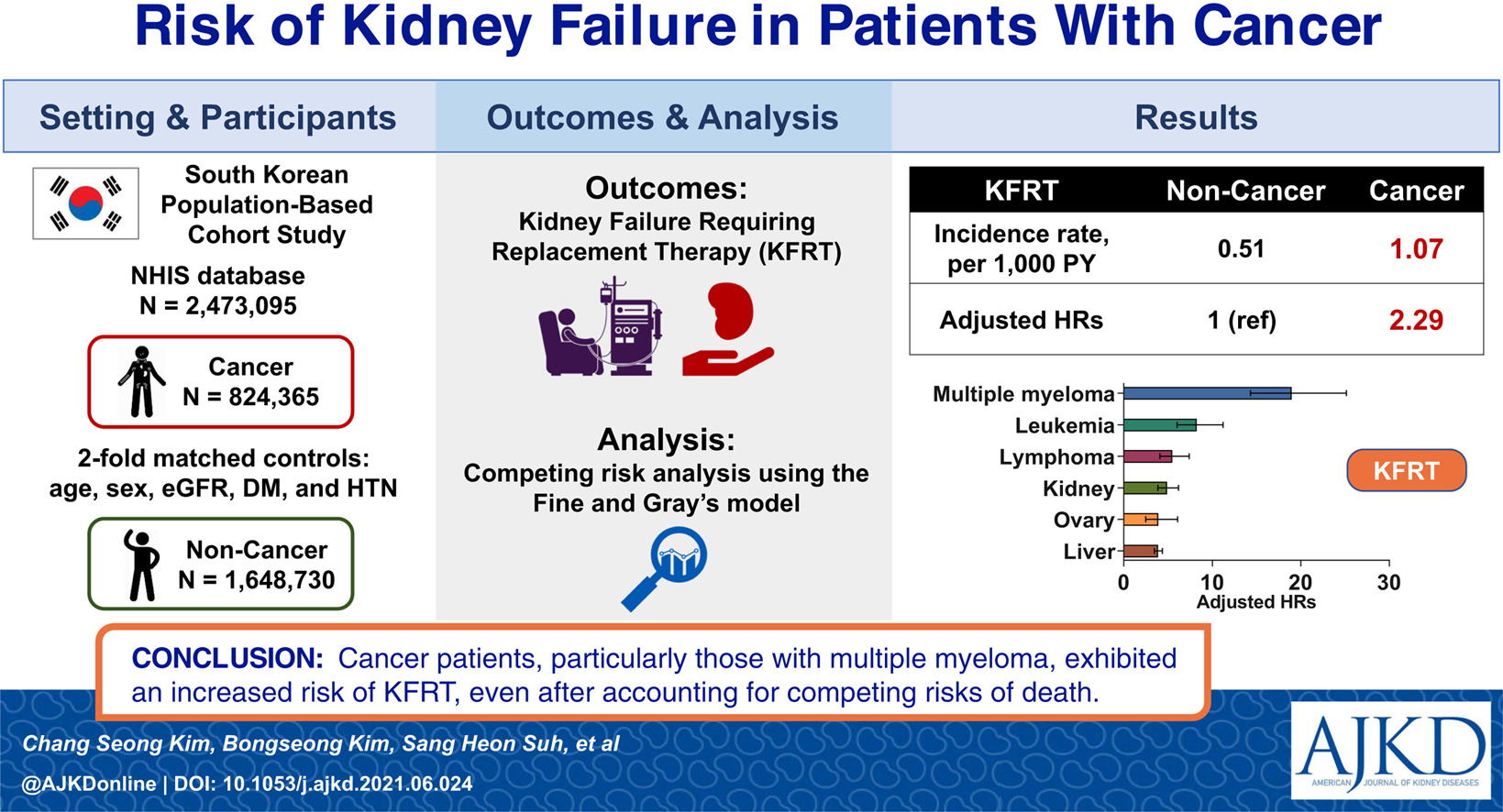 From the authors: Autosomal dominant polycystic kidney disease (ADPKD) is an inherited disorder that leads to kidney failure. Despite decades of research, treatments for ADPKD are limited. Metformin has a track record of safety in patients with type 2 diabetes. The potential beneﬁts of metformin in ADPKD are related to its ability to stimulate AMP kinase, an important enzyme involved in the regulation of cell metabolism. We present the results of a pilot clinical trial to assess the safety and feasibility of using metformin in ADPKD over a 12-month period. Metformin was safe, but only 50% of the participants were able to tolerate the full dose of immediate-release metformin. Future trials should test a better tolerated extended-release formulation for its efﬁcacy to slow the progression of ADPKD.

From the authors: Severe hyperkalemia is a recognized clinical emergency, but the burden of more moderate hyperkalemia and its clinical implications are not well known. This study describes the burden and health outcomes associated with hyperkalemia episodes in a completely captured population in Scotland over a 3-year period. Hyperkalemia occurred in 1 in 100 persons per year. Hyperkalemia was much more common among the elderly as well as those with advanced chronic kidney disease (CKD) or acute kidney injury. People without CKD who developed hyperkalemia were twice as likely to die, twice as likely to have a cardiac event, and 17 times more likely to develop kidney failure. These ﬁndings indicate that hyperkalemia signals diminished kidney function and lasting subsequent risk to kidney health. 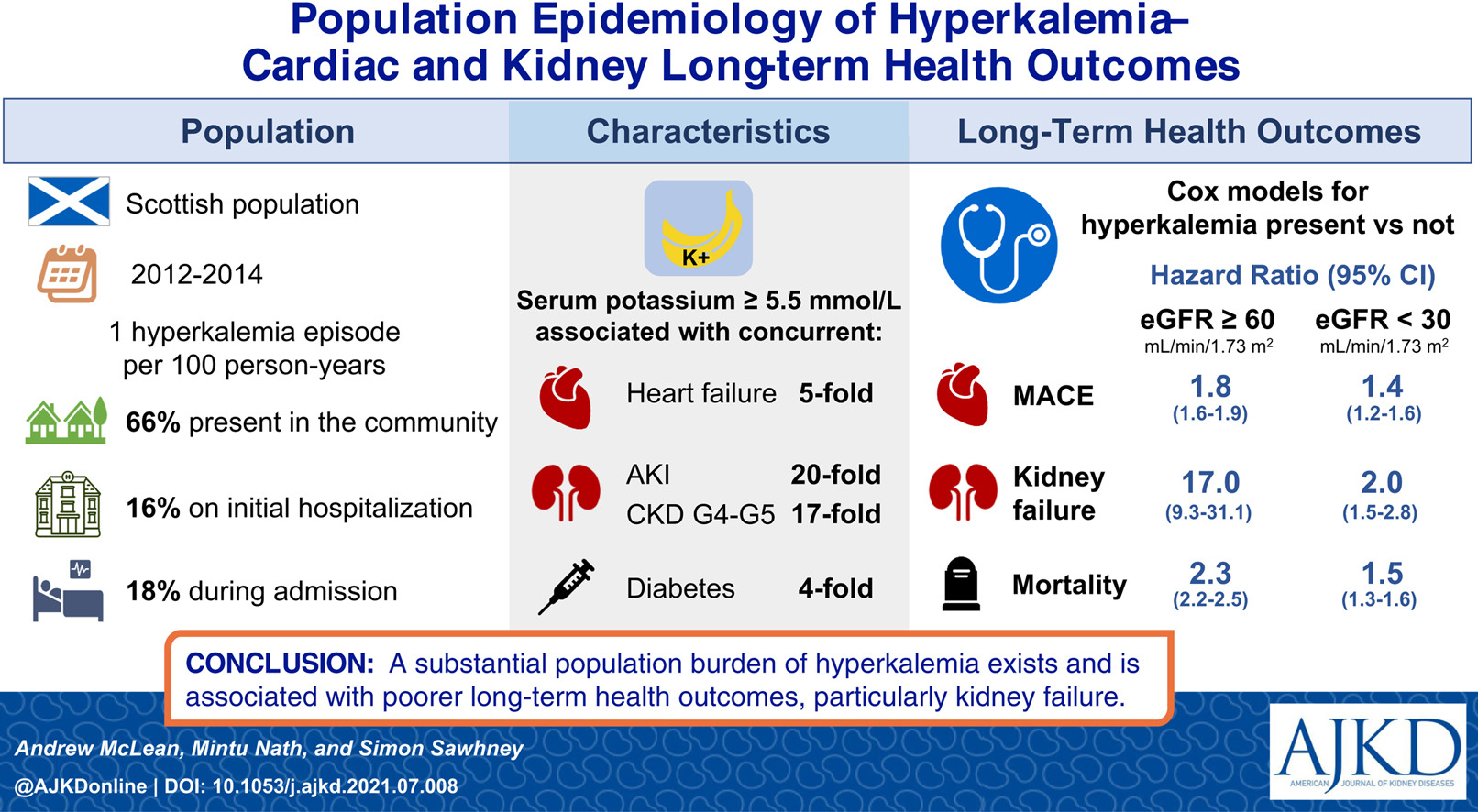 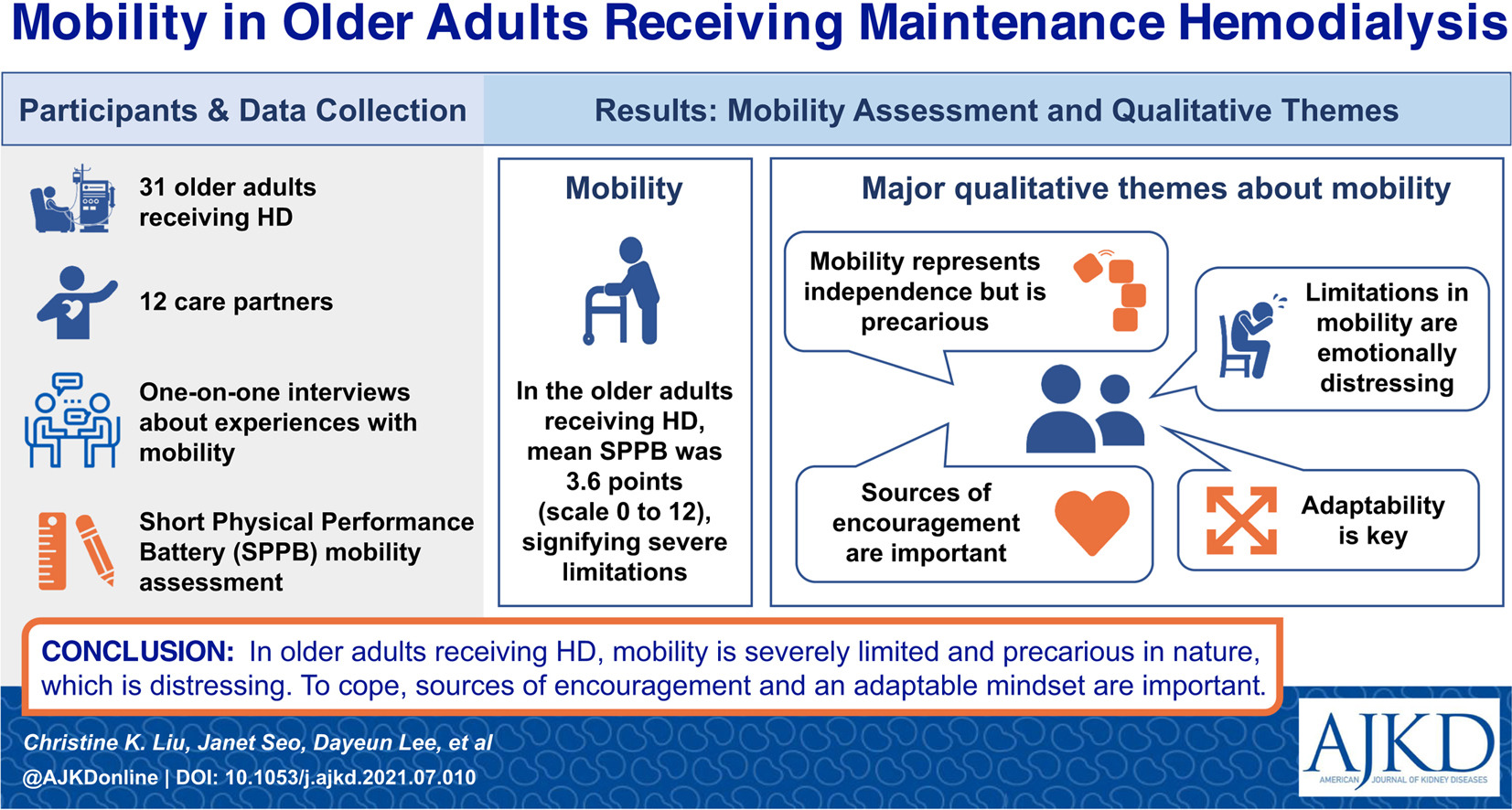 From the authors: Past studies have found that people with chronic kidney disease (CKD) may have an increased risk of developing colorectal cancer compared with people in the general population, but little is known of the factors that are associated with the greater risk of colorectal cancer in these patients. This large, international study examined a cohort of 1,706 patients across the spectrum of kidney disease (CKD stages 3-5 not receiving maintenance dialysis, patients receiving maintenance dialysis, and recipients of a kidney transplant) and looked for factors associated with advanced colorectal neoplasia (cancerous and precancerous colorectal polyps). We found that people who were older, male, or taking azathioprine and/or taking erythropoiesis-stimulating medications were more likely to be found to have advanced colorectal neoplasia.

In October 2020, KDIGO published its first clinical practice guideline directed specifically to the care of patients with diabetes and chronic kidney disease (CKD). This commentary presents the views of the KDOQI work group for diabetes in CKD, convened by the National Kidney Foundation to provide an independent expert perspective on the new guideline. The KDOQI work group believes that the KDIGO guideline takes a major step forward in clarifying glycemic targets and use of specific antihyperglycemic agents in diabetes and CKD. The purpose of this commentary is to carry forward the conversation regarding optimization of care for patients with diabetes and CKD. 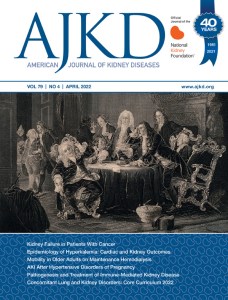 On the Cover: In this engraving of a painting from the German painter Johann Geyer (1807-1875), a group of physicians engage in a spirited discussion evocative of modern-day debates on topics such as the classification of AKI. In 2012, KDIGO established a definition and classification for AKI using serum creatinine and urine output, which has become the standard for AKI research. However, there are still significant inconsistencies in the application of this classification scheme in the clinical setting. In this issue of AJKD, Guthrie et al describe an approach to arriving at consensus more sophisticated than is depicted in Geyer’s painting. They conducted a literature review and online surveys of international experts, and then used of a Delphi method to develop recommendations regarding the KDIGO AKI definitions.

“A group of physicians having stormy discussions in an elaborately decorated room” is from the Wellcome Collection and is in the public domain. 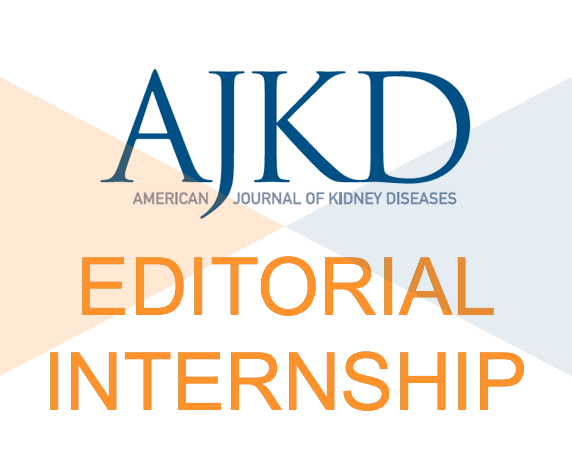 The AJKD Editorial Internship Program provides editorial experience to early career researchers interested in education, teaching, or medical editing/writing. Applications are due by April 30, 2022. Details on how to apply are provided here.