Dr. Orhan Efe is a Nephrologist at Massachusetts General Hospital in Boston, MA. Dr. Efe was an AJKD Editorial Intern from 2021-2022. He is passionate about glomerular diseases and immunology research and clinical practice.

Dr. Jeff M. Sands is the Juha Kokko Professor of Medicine and Physiology Renal Division Director at the Emory University Department of Medicine in Atlanta, GA. His research focuses on urea transport proteins and the urine-concentrating mechanism.

Treatment options for autosomal dominant polycystic kidney disease (ADPKD) are sparse despite the detrimental course of the disease. Tolvaptan, a vasopressin V2 receptor (V2R) antagonist, is the only FDA-approved treatment so far to decelerate decline in glomerular filtration rate (GFR) in ADPKD. There has been a pressing need for additional therapeutic strategies that can prevent kidney enlargement and progression to end-stage kidney disease (ESKD), which occurs in almost half of the patients with ADPKD. In that regard, metformin has been investigated in preclinical and clinical studies with a proposed mechanism of AMP-activated protein kinase (AMPK) activation.

For the past 20 years, researchers have used rodent models of ADPKD to investigate efficacious therapies for ADPKD. First, it was shown that tolvaptan reduces cyst burden by blockade of V2R, thus decreasing cAMP formation. Downstream, this reduces the proliferation of cyst cells as well as cystic fluid accumulation through decreased intra-cystic chloride secretion which osmotically draws water. The clinical efficacy of tolvaptan was later confirmed in two randomized clinical trials: TEMPO in 2011, and REPRISE in 2017. The latter was conducted in patients with lower kidney function with an estimated GFR (eGFR) of 25-44 ml/min/1.73 m2. In both trials, compared to placebo, tolvaptan slowed the annual decline in eGFR, at -2.1 vs -0.71 ml/min/1.73 m2 and -3.61 vs -2.34 ml/min/1.73 m2 respectively. In TEMPO, the increase in the total kidney volume was also assessed, which was 2.8% per year in the tolvaptan group vs 5.5% per year in the placebo group (P<0.001).

Given the partial efficacy of tolvaptan in slowing down kidney function decline as well as side effects such as polyuria and liver toxicity, researchers have investigated alternative drugs to treat ADPKD. One such drug is metformin. AMPK is a metabolic sensor regulating many cellular processes to promote cellular energy efficiency. Metformin is a well-known activator of AMPK. Indeed, in our lab, we used metformin to activate AMPK to treat a rodent model of nephrogenic diabetes insipidus to enhance urine concentration ability. In mouse models of early and aggressive ADPKD, AMPK activation by metformin was found to reduce cystogenesis by inhibition of both the cystic fibrosis transmembrane conductance regulator and the mammalian target of rapamycin pathway. Metformin also improved clinical parameters in a rat model of ADPKD induced by a knock-in mutation of the PKD1 gene. These encouraging preclinical findings, if they can be validated in the clinical setting, have the potential to change our clinical practice and treatment of ADPKD. 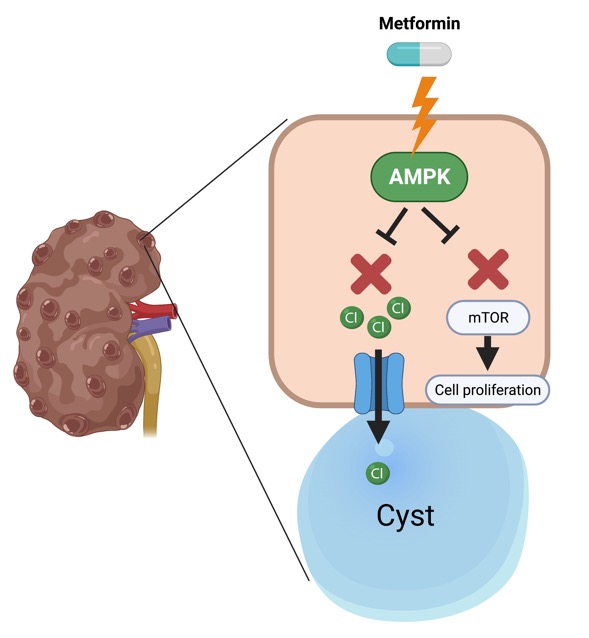 The current AJKD paper by Brosnahan et al reports the results of the “Feasibility Study of Metformin Therapy in Autosomal Dominant Polycystic Kidney Disease Pilot Trial”, which tested the safety and tolerability of metformin in ADPKD patients with mildly reduced kidney function (eGFR of 50-80 mL/min/1.73 m2). The study included a total of 51 patients; 26 were randomized to receive metformin (up to 2000 mg/day) and 25 were randomized to receive a placebo. Co-primary endpoints were the percentage of patients who were prescribed (1) the full randomized dose or (2) at least 50% of the randomized dose at 12 months. Of those on metformin, 50% and 80% completed the study on full dose and half dose, respectively.  As expected, the metformin group had a higher incidence of gastrointestinal side effects such as nausea and diarrhea that were either transient or relieved by dose reduction. Each group had one episode of mild hypoglycemia. eGFR changes and changes in kidney volume were assessed as secondary outcomes. At 12 months, eGFR decline was -0.41 vs. 3.35 mL/min/1.73 m2 in metformin vs placebo groups, respectively.  However, the difference was not statistically different. Kidney volume changes were similar in both groups.

In 2021, TAME PKD also investigated the safety and efficacy of metformin vs placebo in ADPKD patients. The outcomes were very similar to those of Brosnahan et al. Metformin was safe and tolerable with clinical benefits including slowing the annual decline in eGFR (-3.07 vs. -1.71 mL/min/1.73 m2) and mean annual percent change in height-adjusted total kidney volume (3.87% per year in metformin and 2.16% per year in placebo), though the differences were not statistically significant.

In summary, Brosnahan et al show that metformin is well-tolerated and safe in the ADPKD patient population with a trend toward slowing the progression of kidney function decline. Larger RCTs with longer follow-up will determine whether metformin will enter our armamentarium of ADPKD treatment as a solo therapy, or in combination with tolvaptan.