Dr. Lachlan McMichael is a nephrologist & early career clinician-researcher. He is currently undertaking a Kidney Transplant Research Fellowship at the University of British Columbia, and was an AJKD Editorial Intern from 2021-2022. His research program is focused on kidney transplant assessment applying a critical lens to current workflows using epidemiological modeling and health economic evaluation.

The importance of advanced care planning (ACP) has been regularly highlighted in the care of patients with chronic kidney disease (CKD). Despite the recognized importance of ACP, most patients report limited engagement with their treating clinicians regarding advanced care planning, with most dialysis patients in the United States not having an advanced directive (AD) in place. Most research into ACP interventions in patients with kidney disease has been focused on dialysis patients. This research has been conducted despite recognition that earlier ACP interventions prior to dialysis commencement may improve clinician-patient communication and reduce unwanted interventions at the end of life. Due to the limitations in the available literature regarding ACP interventions in the CKD patient population, Lupu et al developed a study to assess the implementation of an ACP tool into CKD clinics. 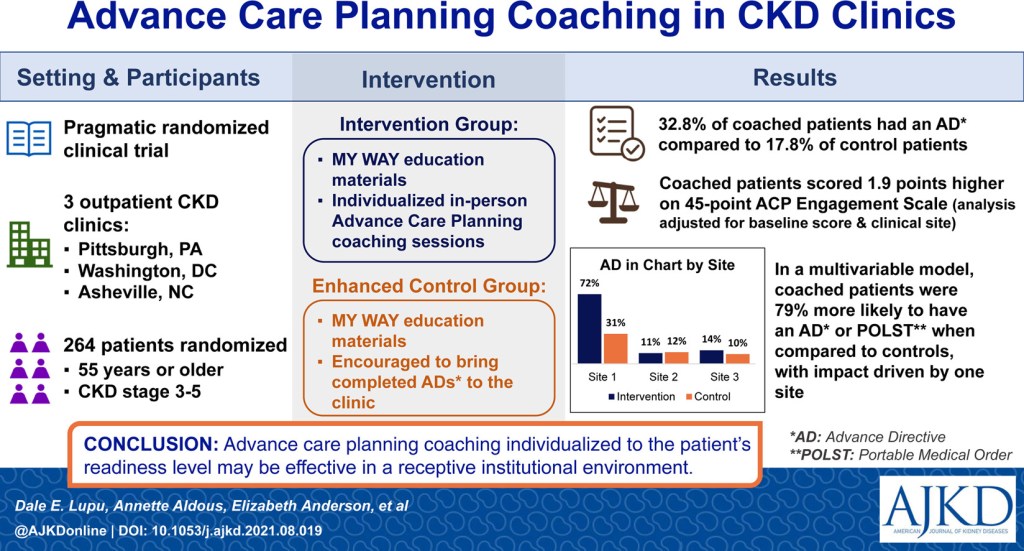 The study was a non-blinded, parallel-group, pragmatic randomized clinical trial using 273 patients with stage 3-5 CKD, 55 years or older who were established patients at 3 outpatient CKD clinics in the United States. Patients were assigned to usual care or ACP coaching. The ACP coaching arm patients received a structured motivational interviewing program (MY WAY) which was designed to encourage patient and family engagement in ACP. Coaching sessions were up to 60 minutes with follow-up sessions available to patients. Usual care patients were provided an ACP educational brochure and AD form. Usual care patients were then encouraged to complete the forms and return them at their next clinic visit. The outcomes examined by the authors were patient engagement in ACP and documentation of an AD or POLST (Portable Medical Order). Patient engagement in ACP was characterized at 0 and 14 weeks post intervention with the Sudore 9-item ACP engagement scale tool. 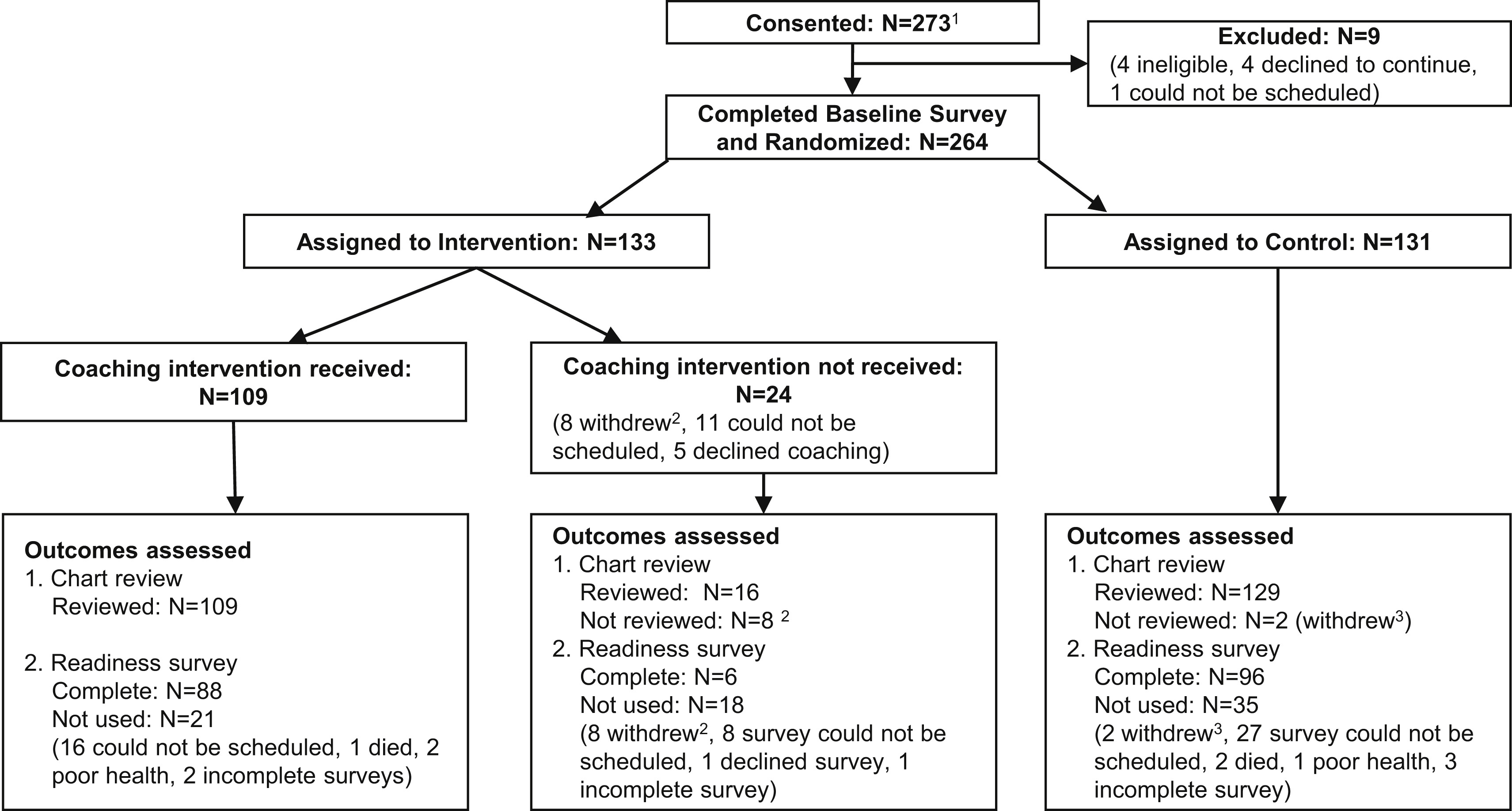 The authors encountered several barriers during this study including difficulties with patient recruitment and variations in the implementation of the study between recruitment sites. Detailed site-specific recruitment information was not available at all locations. The site which did report recruitment outcomes identified most patients as having already completed an AD, not being interested in participating, or being too busy.

One of the more interesting difficulties identified in this study was the variations in practice observed between sites. Particularly notable was that overall trial outcomes were driven by one site which recorded very successful outcomes of AD/POLST completion following the intervention. This site was able to achieve an AD/POLST completion rate of 72% in the intervention arm compared to 31% in the control arm. The other two sites only achieved 11% and 14% AD completion in the intervention group compared to 12% and 10% in the control group, respectively.

On further analysis of each site there were differences in the amount of time allocated to coaching and family member presence. The site with the higher completion rate averaged 49 minutes per coaching session compared to 37 minutes in the second site and 14 minutes in the third. Family members were present at 23% of coaching sessions in the first and most successful site, compared to 11.7% and 10% at the other two sites.

Following the identification of these site differences, the authors went back to the first site to assess if there were any unmeasured factors present at the time of the trial that may have contributed to the differences observed. The authors identified that the successful site had several additional processes that were ongoing at the time of the trial implementation. The site was in the process of establishing quality benchmarks for ACP in end-stage kidney disease (ESKD) patients, leveraging their electronic medical records to integrate ACP into practice, actively engaging nephrology staff regarding the importance of ACP, and encouraging AD/POLST form availability for patients and clinicians.

The authors also hypothesized that the significant differences could have been explained by an exceptionally effective coach. Whilst the site did have a much higher proportion of intervention patients completing AD/POLST, this high completion rate would not have explained the higher baseline AD/POLST completion in the control group.

The authors concluded that the differences observed between the three sites were most likely due to an organization-wide approach that went above the MY WAY coaching tool.

The importance of organizational readiness is often key when a new treatment or pathway is implemented. The authors highlighted the concept of a “conversation ready” organization and the importance of the clinical team being activated and engaged in the change management process. Whilst implementation of ACP within clinical practice may seem a straightforward process, its current implementation in the United States is limited and therefore a broader system focus may be required to ensure that each clinical team and organization is “activated” and ready to engage in altering the status quo. It is likely that the first site was able to leverage many of the system factors which have previously made ACP completion difficult. That site’s system interventions, on top of the MY WAY coaching tool, allowed a large proportion of patients the opportunity to complete AD/POLST forms, and will hopefully lead to long lasting outcomes for their patients who have had the opportunity to participate in advanced care planning.

This study represents a novel analysis of the implementation of an ACP coaching tool within clinical practice for CKD patients. We should remain cautious about the overall generalizability of this study, given the predominant reliance on one site’s results, self-selection of patients, and exclusion of non-English speaking participants. Despite these cautions, the study highlights the potential importance of system wide measures when implementing new clinical care pathways.

CKD clinics should review their current practice and assess whether they are providing an ACP “conversation ready” space for patients, and reflect on broader organizational factors that may impede implementation of practice change. Organizations should consider the potential benefits of providing an individualized ACP coaching session for patients, and review and assess interventions such as clinician involvement, establishing care benchmarks, and streamlining the AD/POLST completion process. Changing practice is complicated, and a whole-team approach may help to improve advanced care planning within the chronic kidney disease community.