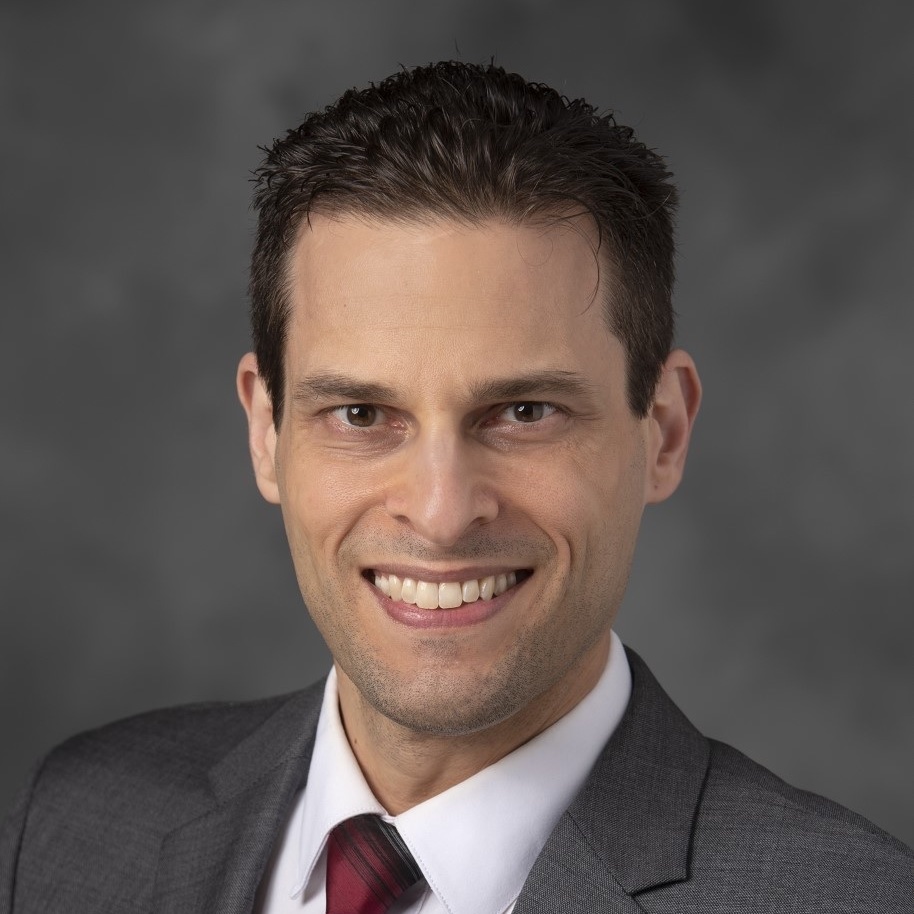 In a recent Core Curriculum published in AJKD, James Novak and David Ellison discuss the pharmacology and therapeutic use of diuretics in states of volume overload and strategies to overcome diuretic resistance. AJKDBlog’s Interviews Editor, Timothy Yau @Maximal_Change sat down with Dr. Novak @JamesNovakNeph to discuss these topics.

AJKDBlog: Loop diuretics are one of the most important tools in the nephrologist’s armamentarium. Can you briefly discuss the differences between the main 3 (furosemide, bumetanide, torsemide) along with the reasons you would choose one vs the other for different disease states?

The main differences among furosemide, bumetanide, and torsemide are pharmacokinetic (bioavailability, half-life, and dose), which should inform the choice of diuretic. For example, furosemide has lower oral bioavailability than the others, so may not be the best choice for oral therapy in a patient with gastroparesis or gastrointestinal edema. Torsemide has a longer half-life than the others, so may be the best choice for once daily dosing if adherence is suboptimal. Table 1 in the Core Curriculum serves as a great reference for bioavailability, metabolism, half-life, and dose of various diuretics.

AJKDBlog:  Follow-up question. A recent tweetorial by one of my favorite #MedTwitter folks Tony Breu discussed how and why torsemide is his favorite loop diuretic. Curious to know what your thoughts are on this.

Torsemide may confer additional cardiovascular benefits, including mineralocorticoid receptor antagonism with decreased myocardial fibrosis and decreased risk of readmission for decompensated heart failure. On the other hand, optimal therapy for congestive heart failure in the modern era includes a mineralocorticoid receptor antagonist, as well as an ACE inhibitor or angiotensin II blocker and an SGLT2 inhibitor, so it’s unclear how important the selection of a specific loop diuretic is, as long as it’s dosed appropriately. The Torsemide Comparison with Furosemide for Management of Heart Failure (TRANSFORM-HF) trial is anticipated to conclude in 2022 and should provide more information about whether pharmacokinetic, and possibly pharmacodynamic, differences between torsemide and furosemide translate to improved clinical outcomes.

AJKDBlog:  Thiazides are used first line for HTN, but usually are added as a next step in volume overload states after loop diuretics to block the subsequent segment of the nephron. What are some of the unique side effects of thiazide diuretics and why do we see these abnormalities?

Thiazides are unusual among diuretics in promoting calcium reabsorption, attributed to (1) proximal tubule reabsorption stimulated by volume contraction and (2) distal tubule reabsorption from increased basolateral sodium/calcium exchange. Thiazides are more likely than loop diuretics to cause hyponatremia, at least partly because of (1) selective inhibition of the diluting segment of the nephron and (2) hypovolemia-mediated ADH production while preserving the medullary concentrating gradient and water reabsorption. Thiazide diuretics have also been associated with impaired glucose tolerance, possibly from hypokalemia-mediated inhibition of insulin release.

AJKDBlog:  You discuss some medications that oftentimes are not thought of in the class of “diuretics” like SGLT-inhibitors and vasopressin receptor antagonists. Can you mention some of the data around these classes of meds that show that they may also be useful in volume overload states related to CHF or cirrhosis?

SGLT2 inhibitors have been found to be beneficial in patients with congestive heart failure. The EMPEROR-REDUCED, DAPA-HF, and SOLOIST-WHF trials showed 29-36% reductions in rates of hospitalization for heart failure and improved quality of life with empagliflozin, dapagliflozin, and sotagliflozin, respectively. The ACTIV in CHF, TACTICS-HF, SECRET of CHF, and AQUAMARINE trials, among others, showed that tolvaptan is an effective adjunctive diuretic for symptom improvement and volume removal but does not improve left ventricular mass, heart failure-associated morbidity, or mortality. Although vasopressin receptor antagonist use in cirrhosis is generally discouraged by the US FDA, small studies in Japan have shown improved diuresis with tolvaptan as a second-line agent.

AJKDBlog: Box 1 in the paper discusses many of the mechanisms of diuretic resistance. This was also a topic of NephMadness 2022’s Cardiorenal region. Oftentimes, the question comes up to the consulting nephrology team about initiating isolated ultrafiltration. Can you briefly take us through some of the data on using isolated UF vs maximizing medical therapy with diuretics and the outcomes? 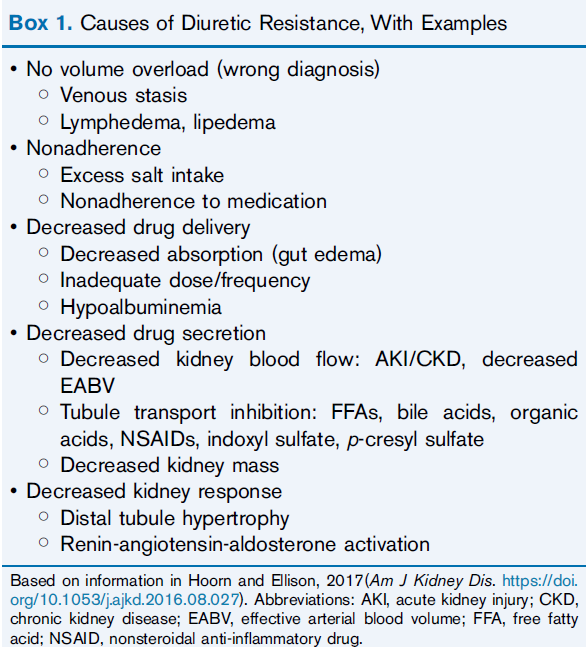 The UNLOAD trial showed more weight loss with isolated ultrafiltration (IUF) and less risk of rehospitalizatio compared with furosemide IV in patients with acute heart failure (AHF), but the furosemide dose used was only 20–30% maximal. Next came the the CARRESS-HF trial showing less weight loss and more frequent serious adverse events with IUF compared with furosemide IV in patients with AHF and AKI. Similarly, the AVOID-HF trial showed no difference in weight loss but more frequent serious adverse events in patients who received IUF. Synthesizing these data, a recent Cochrane Database systematic review found that IUF compared with furosemide IV may decrease the risk of rehospitalization for AHF at the expense of increased risk of long-term dialysis, but concluded that more study is needed.

AJKDBlog: In one of the special scenarios, you discuss volume overload in nephrotic syndrome. I was taught in med school the classic “underfill hypothesis” of low albumin due to proteinuria, low oncotic pressure, and subsequent interstitial edema. However, the “overfill” hypothesis is likely more accurate based on experimental models. Can you walk us through this explanation?

The “underfill hypothesis” requires a sustained oncotic pressure gradient from the serum to the interstitium, which has been difficult to demonstrate consistently. In fact, rats fed a very low protein diet showed parallel declines in serum and interstitial oncotic pressures, with net Starling forces no different from those in control rats. Clinical studies showed similar preservation of the oncotic pressure gradient in nephrotic states. The “overfill hypothesis” attributes edema to urinary sodium retention, and is again supported by rodent and human studies. Mechanisms for renal sodium avidity include constitutive activation of the epithelial sodium channel (ENaC) by filtered proteases and increased sympathetic nervous system activity. However, the primacy of overfill is challenged by the findings that children with minimal change disease are often intravascularly volume-depleted, and that ENaC blockers are not universally effective in managing nephrotic edema. Most investigators believe that mechanisms of edema generation differ among individuals, diseases, and populations. Like most things in medicine, more research is needed to better understand the complicated world of volume overload.

Core Curricula aim to give trainees in nephrology a strong knowledge base in core topics in the specialty by providing an overview of the topic and citing key references, including the foundational literature that led to current clinical approaches. All Core Curricula are freely available on AJKD.org