The first round results from NephMadness are in. Who’s up? Who’s down? Who’s out? What was your bracket buster? Where did the Blue Ribbon Panel go wrong? Tweet your reaction with hashtag: #Saturated16

In a crushing decision (5-2) the anti-EBM forces of BP for Kidney Protection defeated BP for heart protection (don’t blame us, it crushed our brackets too).

In the bottom half of the subregion Ambulatory Blood Pressure Monitoring dispatched AOBP 5-2.

AOBP is promising, but ABPM is tried and true. Meaningful outcome endpoints (LVH) have shown value to ABPM.

Although the concept of the oscillatory BP monitor sounds appealing, it does not address the issue of white coat hypertension like ABPM. If taking the BP in the office makes a patient anxious and hypertensive, what happens when this individual:

Studies have shown that meditation lowers blood pressure during meditation but this does not extend to the rest of the day.

Still, the image of patients all having repeated AOBP measurements in the waiting room is intriguing.

At the top of the bracket we had Conservative Care blowing the doors off of Stopping Dialysis 7-0. Is this a dynasty in the making?

Nephrologists do so much end-of-life care, they should be fully trained in palliative care and prepared to handle the tough discussions regarding patient values. Nephrologists are a primary palliative team.

Nephrologists need to be good at advising patients and their families about benefits and risks. Some patients will opt for a trial of dialysis and we should support them—they may find a palliative care consult useful as they assess the benefits of this demanding therapy. But for many patients, we have to be willing to advise patients to embrace conservative care—after visiting the dialysis unit, talking with staff, physicians and family members—and deliver considered, supportive, and sometimes intense conservative care [meds, nutrition]. Again palliative care may be very helpful in providing patient and family support during this time. They may also identify those points when goals of care change, when diet restrictions can be lifted, for example.

Too many people seem to regret the decision to start dialysis in the first place. The expertise brought by those trained in palliative care is valuable…though they can help to teach us.

In the opening match, CKDu dominated the game, going wire to wire over Traditional Remedies as a cause of AKI 6-1.

We are learning more and more about mechanisms of kidney injury, and CKDu is an important step in this process.

Traditional remedies are a problem all over the world given the ease of travel from country to country.

Normalization of Hemoglobin was taking no prisoners in its contest with duel ACEi/ARB therapy and rolled 6-1. Sorry Dad.

In the Missteps of the 1980s (also known as Rick Astley) Steroids for Membranous barely clipped Aluminum binders 4-3.

Much like any team with Bryce Drew, I don’t think that dual RAS blockade is done.

Did we ignore data for long periods of time because of false intuition or other nefarious reasons that led to years of patient harm? Yikes.

Normalization of Hgb was a good idea…and led eventually to the right studies so the hypothesis was tested. Just hope people don’t forget that a Hgb of 9-11 or so is still way better than the 5-7 Hgb levels so common before ESAs.

More of the aluminum problem was from the water, not the binders.

There can’t be a bigger misstep than the use of ESA to normalize hemoglobin; in fact, even the use of ESAs to increase hemoglobin concentration above 9 can be considered the largest misstep in nephrology history since Amgen became the largest biotech in the history of the universe. ACEi and ARB combination cannot compare in terms of the number of dollars spent and the number of people to whom this misstep could be applied.

In the immune modulating subregional, Tregs in Transplant barely made it past a scrappy HLA Epitopes 4-3.

In the diagnostic subregional ‘Omics’ walked all over ELI SPOT 6-1 to advance to the transplant final.

It is exciting to see new opportunities to address transplant care. We are learning more, but may end up understanding less.

Recreational Drugs and the Kidney

In the battle of the club drugs, Cocaine out hustled ecstasy 6-1. In the undercard, Synthetic Cannabinoids blew past anabolic steroids in a puff of bong smoke, 6-1.

No bath salts? Without those, this category is a wash.

The pathways of injury in this arena is fascinating. They reinforce common principles (hypertension) and introduce novel mechanisms.

Picked the two (cocaine and synthetic cannabinoids) that seem to be more popular….not with me personally but in general.

Get a drug test for Dr. Berns, stat!

No question that if we’re talking about adverse effects of these drugs on kidneys, cocaine is the winner.

In the battle of the HUS twins, Atypical HUS flushed Typical HUS 6-1. Does this early round success bode well for a run deep in the tournament? In the UTI subregional, Prophylactic Antibiotics barely edged out Imaging After UTI 4-3.

I cannot see imaging winning it all.

aHUS is an exciting arena where disease manifestations introduce us to new mechanisms of injury.

In the first game of the Statistics Region the Bayesians fulfilled their pre-test probability by crushing the Frequentists. Post test probability of a win: 100% (actually it was 6-1). In the second half of the bracket, it was Pragmatic Trials holding on to win over adaptive trials  5-2.

Pragmatic trials are the best, cheapest, and most effective method to enhance the care of large numbers of patients.

I have to take Perry’s lead on this. He is way smarter than me.

Ladies and Gentleman, I give you, your Saturated 16! 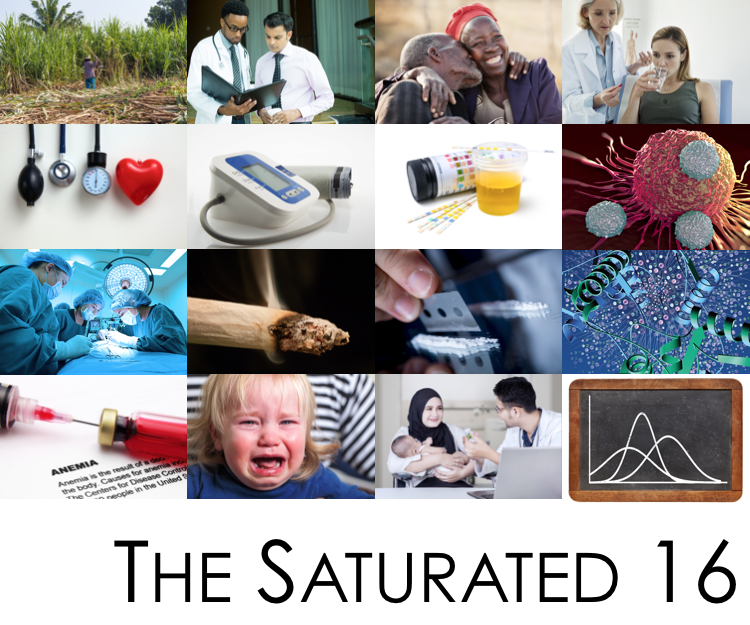