As KDIGO Social Media Ambassador, I always make it a point to attend the KDIGO Guideline and Conference Updates at Kidney Week. It always provides a nice compendium of updates of KDIGO guidelines.

In 2013, KDIGO convened a Controversies Conference titled, “CKD-MBD: Back to the Future” in Madrid, Spain. As in other Controversies Conferences, the goal of that session was to determine whether the existing guidelines from 2009 needed modification, as well as to assess how useful clinical outcomes can be more easily identified based on current evidence. The participants refer back to the research questions included at the end of each of the 2009 CKD-MBD Guideline chapters.

The first update she talked about was on TESTING FOR CKD-MBD. 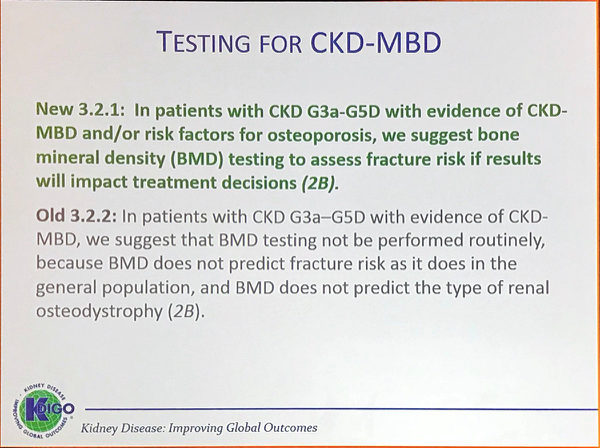 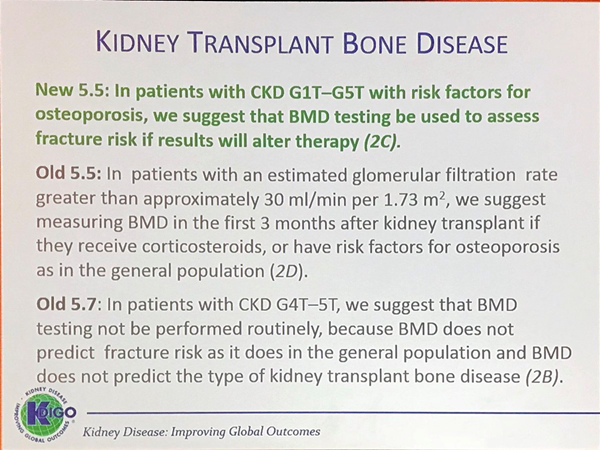 This update is based on multiple new prospective studies that have demonstrated that lower dual-energy X-ray absorptiometry (DXA) BMD predicted incident fractures in patients with CKD G3a-G5D. Based on those studies, the finding that hip BMD predicted fractures was consistently shown. Interestingly, she pointed out that 2 studies included individuals with and without CKD and showed that the associations between DXA BMD and fracture rates were actually comparable to those with and without CKD. 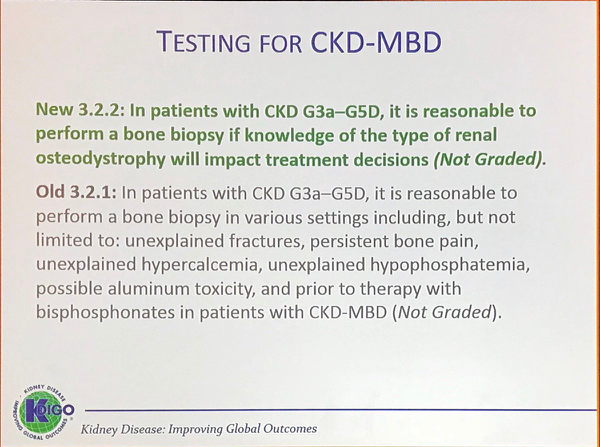 Dr Leonard pointed out that the primary motivation for this particular revision was the growing evidence that anti-resorptive therapies are effective in patients with CKD G3a-G3b and G4, and the lack of robust evidence that anti-resorptive medications can induce adynamic bone disease. The incidence of fractures is markedly increased in patients with CKD and the lack of ability to perform a bone biopsy may not justify withholding osteoporosis medications in patients at high risk of fracture.

The next update pertained to PHOSPHATE AND CALCIUM. 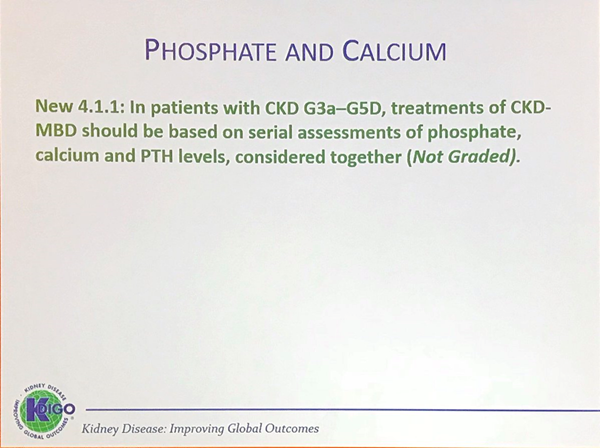 This is a topic that has had a lot of updates. Since the publication of the previous Guideline, additional studies of better quality are available, although they did not discriminate between dialysate Ca concentrations of 1.25 and 1.5 mmol/L (2.5 and 3.0 mEq/L). For this reason, the wording on this recommendation was unchanged but the evidence grade was upgraded from 2D to 2C.

A new recommendation was added in order to emphasize the complexity, interdependency, and interaction of CKD-MBD laboratory parameters. 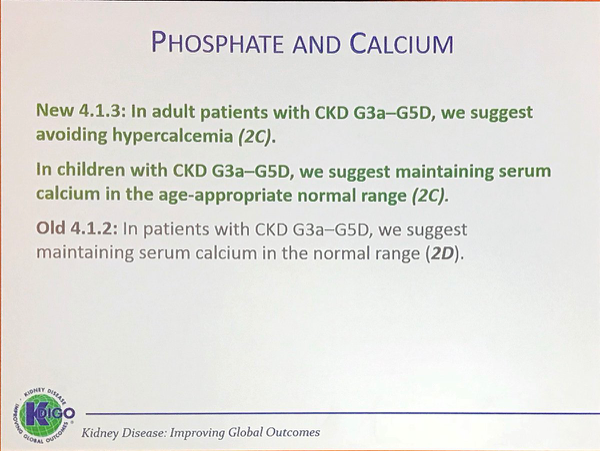 There has been additional epidemiologic evidence linking higher Ca concentrations with increased mortality and nonfatal CV events in adults with CKD; hence, the grade was upgraded from 2D to 2C. The workgroup did acknowledge that overall, the evidence remains limited due to lack of trial data.

On an interesting note, mild and symptomatic hypocalcemia (eg, in the context of calcimimetic treatment) can be tolerated in order to avoid inappropriate Ca loading in adults. In this connection, she pointed out that, in the EVOLVE trial, no negative signals were associated with the persistently low serum Ca levels in the cinacalcet arm. Obviously, significant or symptomatic hypocalcemia should still be addressed. 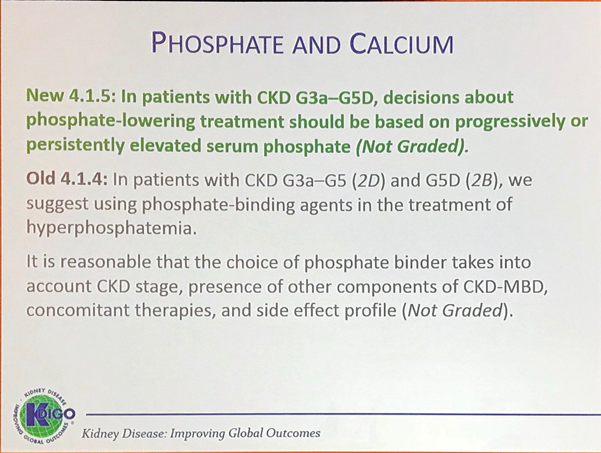 This is one of the important updates that I now emphasize during teaching rounds. It emphasizes the conclusion that early “preventive” treatment of hyperphosphatemia is currently not supported by data. The workgroup also pointed out that “phosphate-lowering” treatment encompasses not only the use of phosphate binders, but also dietary phosphate restriction as well as dialysis per se. 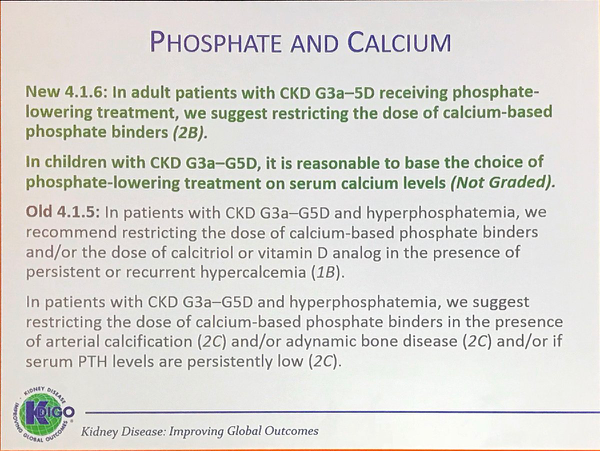 There is new evidence from RCTs that supports a more general recommendation to restrict Ca-based phosphate binders in patients with hyperphosphatemia, eg, progression of coronary artery calcification, morbidity, and mortality. 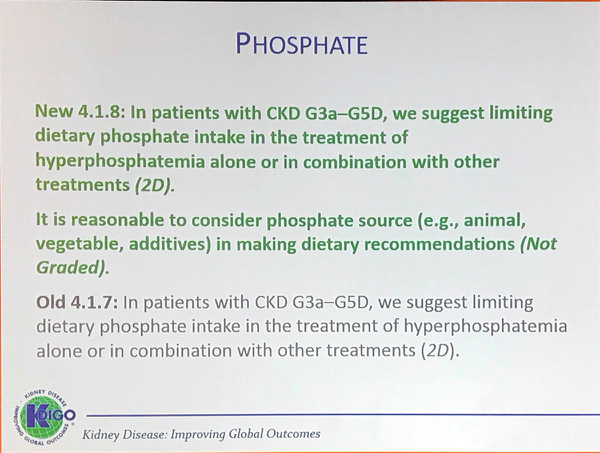 New data on sources of phosphate were included. These include natural phosphorus (as cellular and protein constituents) contained in raw or unprocessed foods, phosphorus added to foods during processing, and phosphorus in dietary supplements or medications. Inorganic phosphate is more readily absorbed and is present in additive-laden processed, preserved foods and soft drinks. 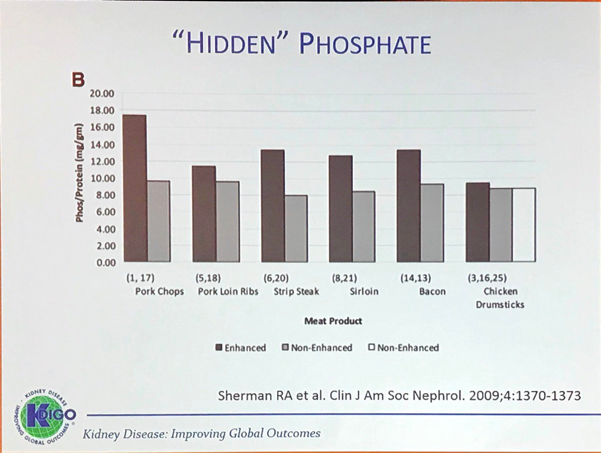 Lastly, she discussed the updates regarding ASSESSMENT OF PTH. 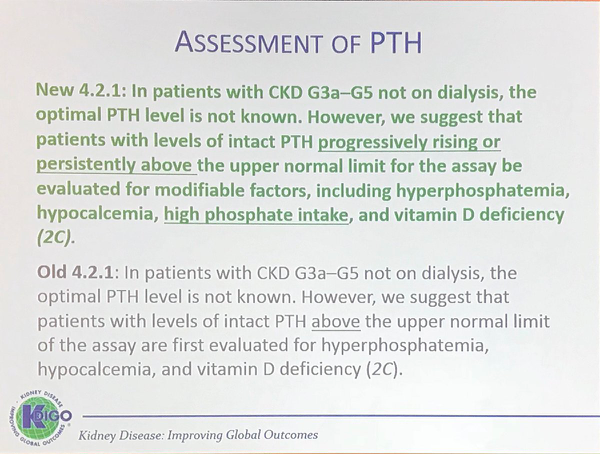 Personally, I think this is one of the revolutionary changes in this set of recommendations. Dr. Leonard said that the workgroup felt that modest increases in PTH may actually represent an “appropriate” adaptive response to declining kidney function; hence, the workgroup revised the recommendation to include “persistently” above the upper normal PTH levels as well as “progressively rising” PTH levels, as opposed to ‘above the upper normal limit.’ Therefore, treatment should not be based on a single elevated value. Regarding the question about the optimal PTH level (this remains unsettled), the workgroup felt that rising PTH levels in CKD G3a to G5 warrant examination of modifiable factors (eg vitamin D insufficiency, hypocalcemia, hyperphosphatemia, high phosphate intake). 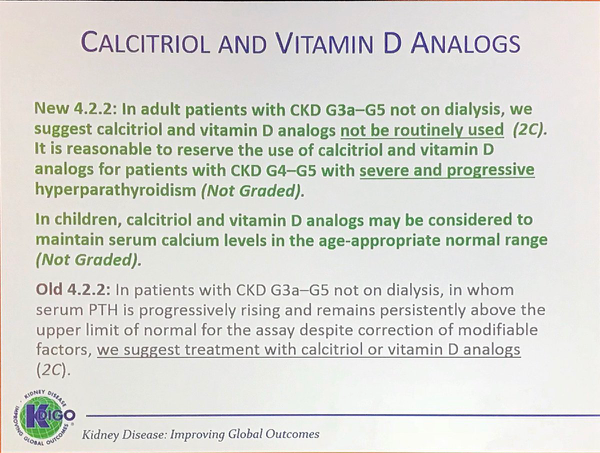 Suppression of PTH via calcitriol and other vitamin D analogs have been the therapeutic mainstay for the treatment of secondary hyperparathyroidism. Multiple RCTs cited in the 2009 KDIGO Guidelines reported benefits of these agents on improving biochemical endpoints, and adverse effects of hypercalcemia were also noted. Since the publication of those guidelines, 2 important RCTs (PRIMO and OPERA) looked at patients with moderately increased PTH levels and demonstrated significantly increased risk of hypercalcemia in those treated with paricalcitol (vs placebo) in the absence of beneficial effects on surrogate cardiac MRI endpoints. The risk-benefit ratio of treating moderate PTH elevations is no longer favorable. 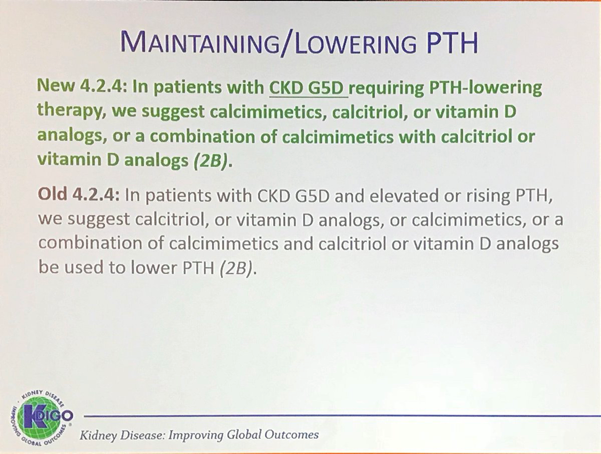 Although EVOLVE did not meet its primary endpoint (death or clinically important vascular events), the majority of the workgroup members were reluctant to exclude potential benefits of calcimimetic agents for CKD G5D patients based on pre-specified analyses. Whereas some felt that only the primary analysis should be used to interpret the outcome, others were equally convinced that the secondary analyses strongly suggested a benefit of treatment with cinacalcet on important patient-level outcomes. There was agreement that the higher cost was a relevant consideration.

No PTH-lowering treatment was prioritized, since calcimimetics, calcitriol, and vitamin D analogs are all acceptable first-line options in CKD G5D patients.