We are getting closer and closer to the Championship Match! The first round and second round results of NephMadness 2018 had a number of upsets. How are the Blue Ribbon Panel doing? Check out the Current Standings and tweet your reaction and score with the hashtag: #Filtered4 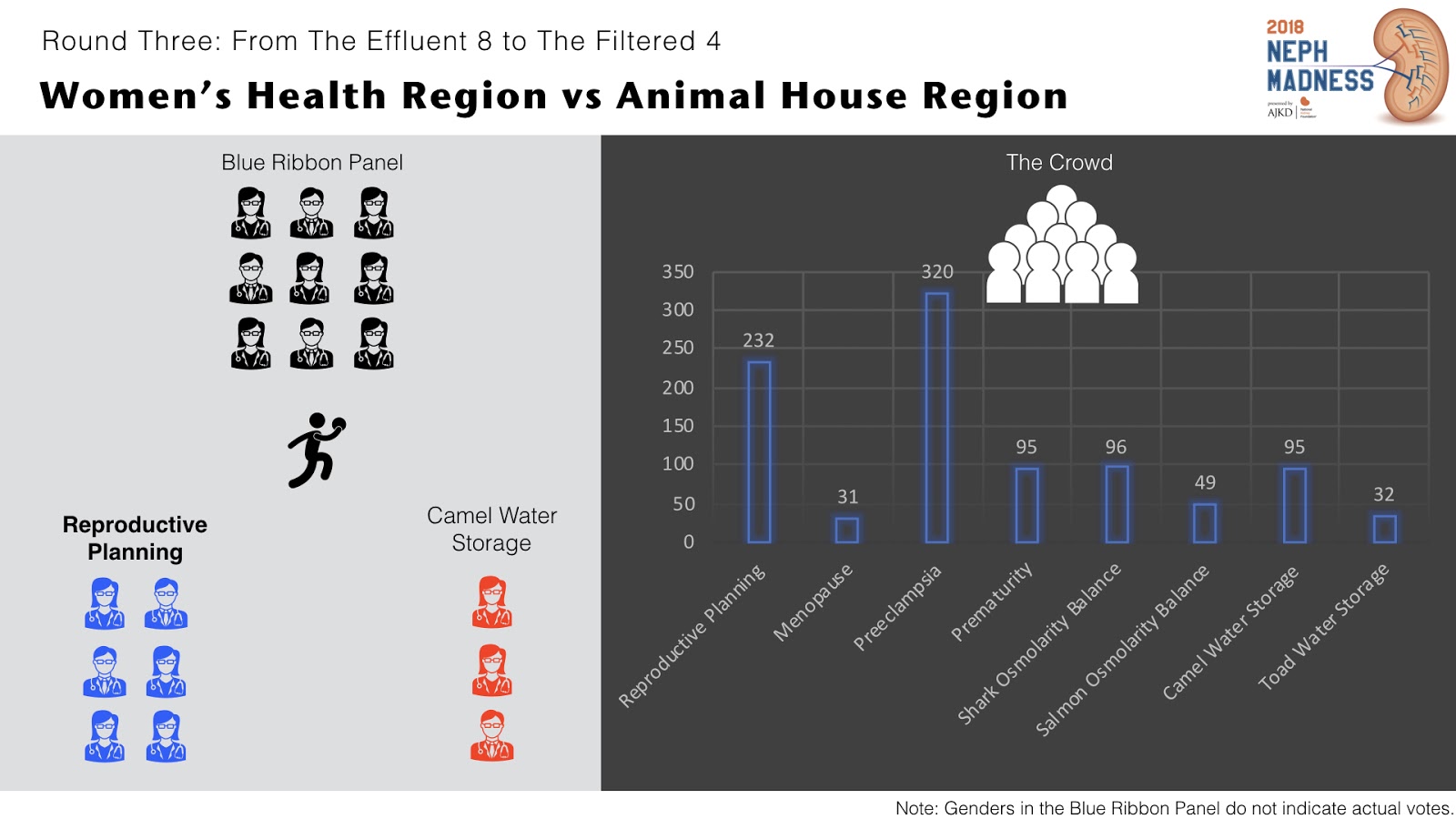 It’s an area we have ignored for too long. The camel story is intriguing but the women’s reproductive issue is in our face.

Oh no! I really wanted preeclampsia. So I will therefore choose reproductive planning as it is part of an informed and shared decision. See #WKDchat for more on this.

One of my pet peeves is the conventional wisdom, “You must drink 8 glasses of water a day,” as though that makes any logical or physiologic sense. And this nonsense is not benign: it has created a plastic bottle industry that wreaks havoc on the environment (and that doesn’t even consider what bottled non-fluorinated water does to promote dental caries in children’s teeth)! But time to get off my high horse (camel?). Still, thinking about the shortage of water in some parts of the world, (South Africa presently being a prime example), perhaps we should all be a little more “dromedarian.” I simply cannot get enough of this camel water story. And with that in mind, today should be Camel Appreciation Day. Instead, we just celebrated World Kidney Day, which focused on “Kidneys and Women’s Health” this year. What kind of a fool would I be if I voted for my dehydrated humped friends? Reproductive Planning it is! 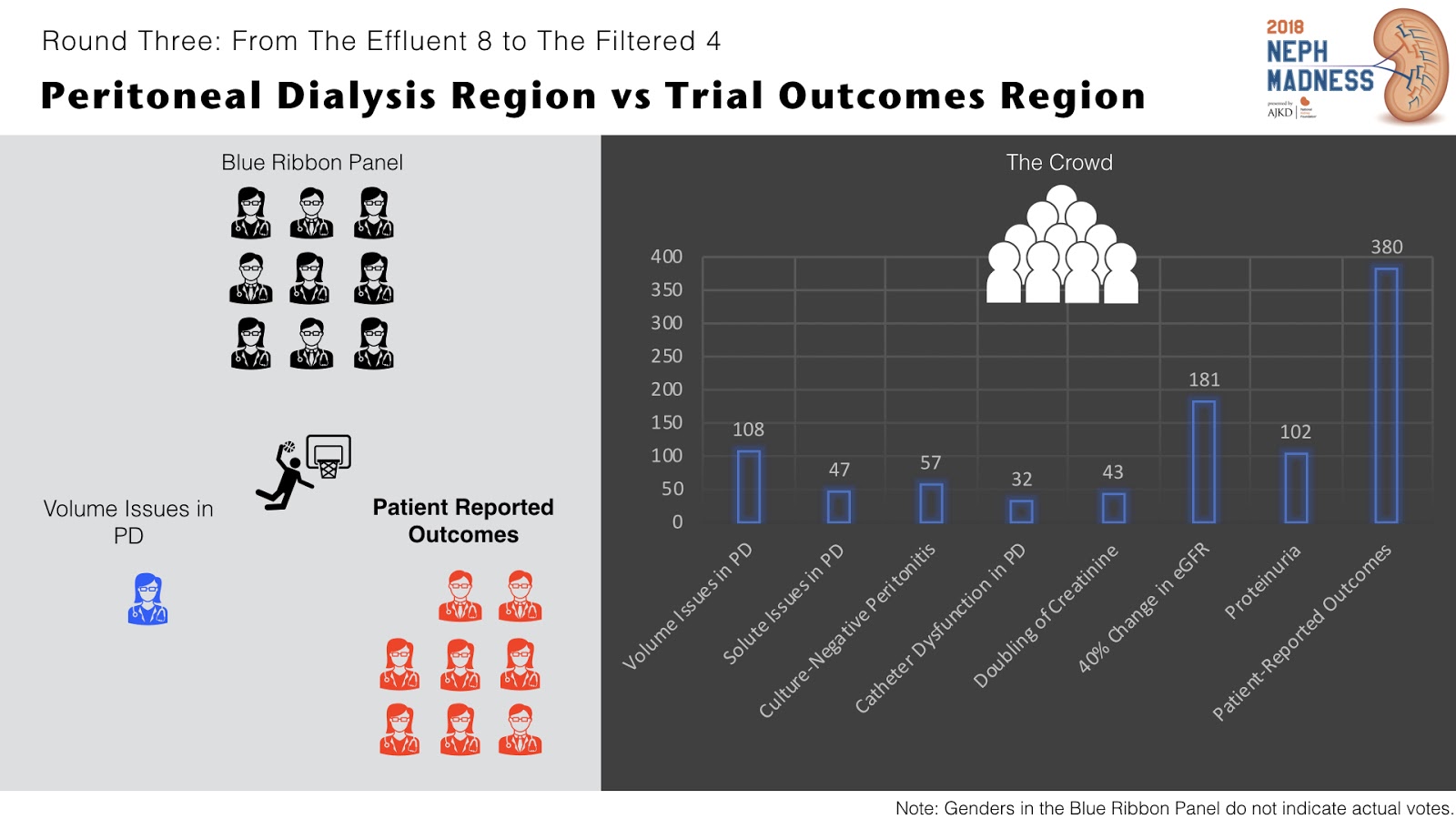 Volume Issues in PD did well in the first two rounds showing why it was the champion of the Peritoneal Dialysis Region, but they just were no match for Patient-Reported Outcomes, who are really starting to hit their stride and proving why they are a major contender in this tournament.

How patients feel matters more than anything we can calculate.

Who is it that counts here???

The future of dialysis is in increasing home therapies, and this means growth in PD. You would think that PD with its steady state fluid removal would have better volume control and less CV disease than HD, but that is not necessarily true. This does not appear to translate into a difference in RRT survival between HD and PD but this problematic volume overload has the potential of being the achilles heel of PD. Volume in PD it is.

Always PROMs for me. 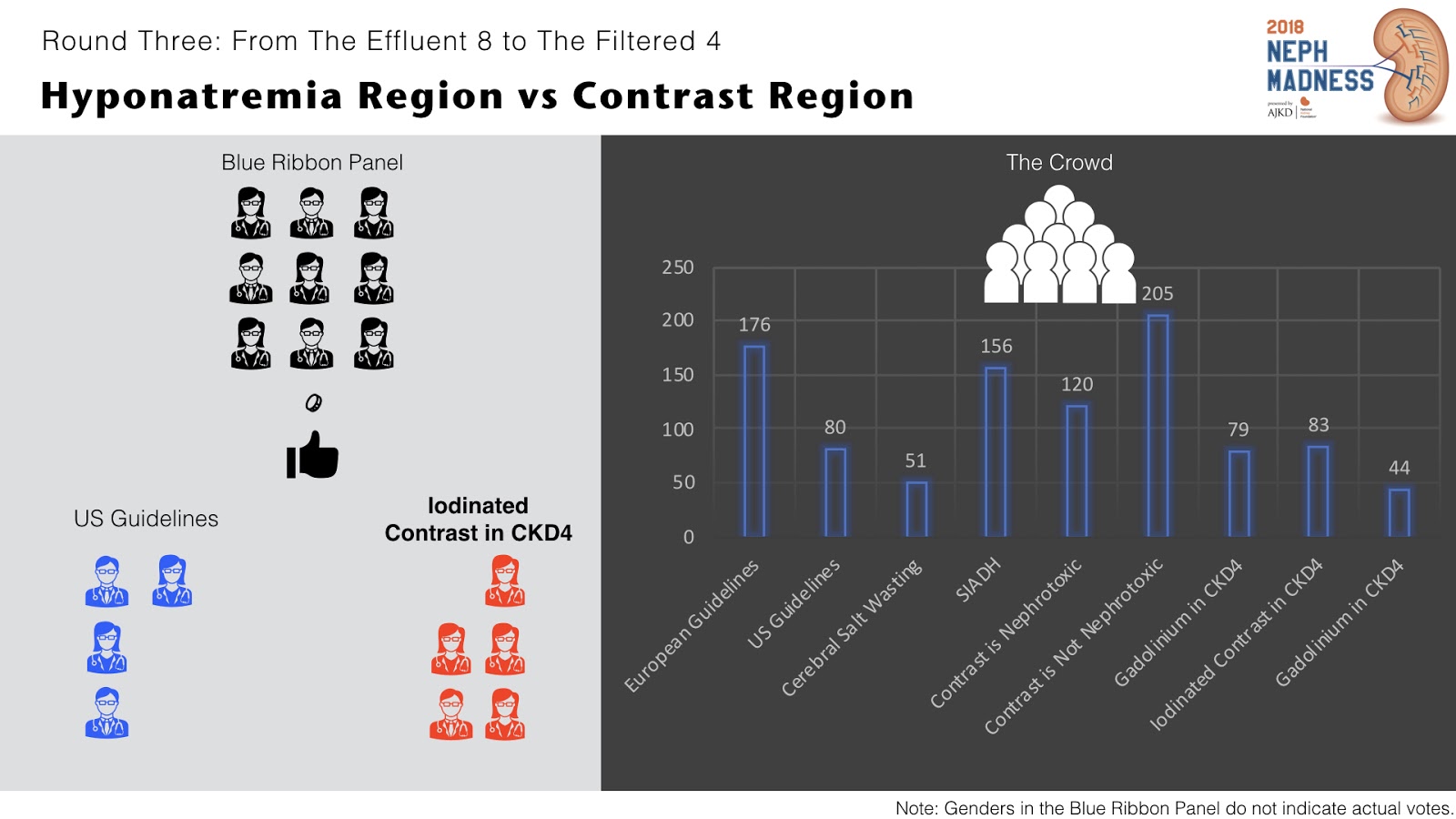 This game was a real nail-biter! US Guidelines hit a 3-pointer to tie the game up with 2 seconds to go pushing the game into extra time. It was Iodinated Contrast in CKD4 that came up with the huge 3-pointer to go up by 1 with time expiring.

I love evaluating and treating complicated cases of hypoNa and even though I would argue that each case has its own nuances that really makes guidelines impossible, they still fill a big void. Still, contrast has dominated the renal media (not the renal medulla ugh) the last year. And while contrast has had its share of #FakeNews this year, there is something to asking Chicken Little to give it a rest. It is time to “man up” (person up?), bite the bullet, face the music, seize the opportunity, run the gauntlet, cross the Rubicon, and simply stop being paralyzed by the fear of CIN. Contrast in CKD4 it is.

Neither of my picks got through, so I am going for contrast to highlight those issues. 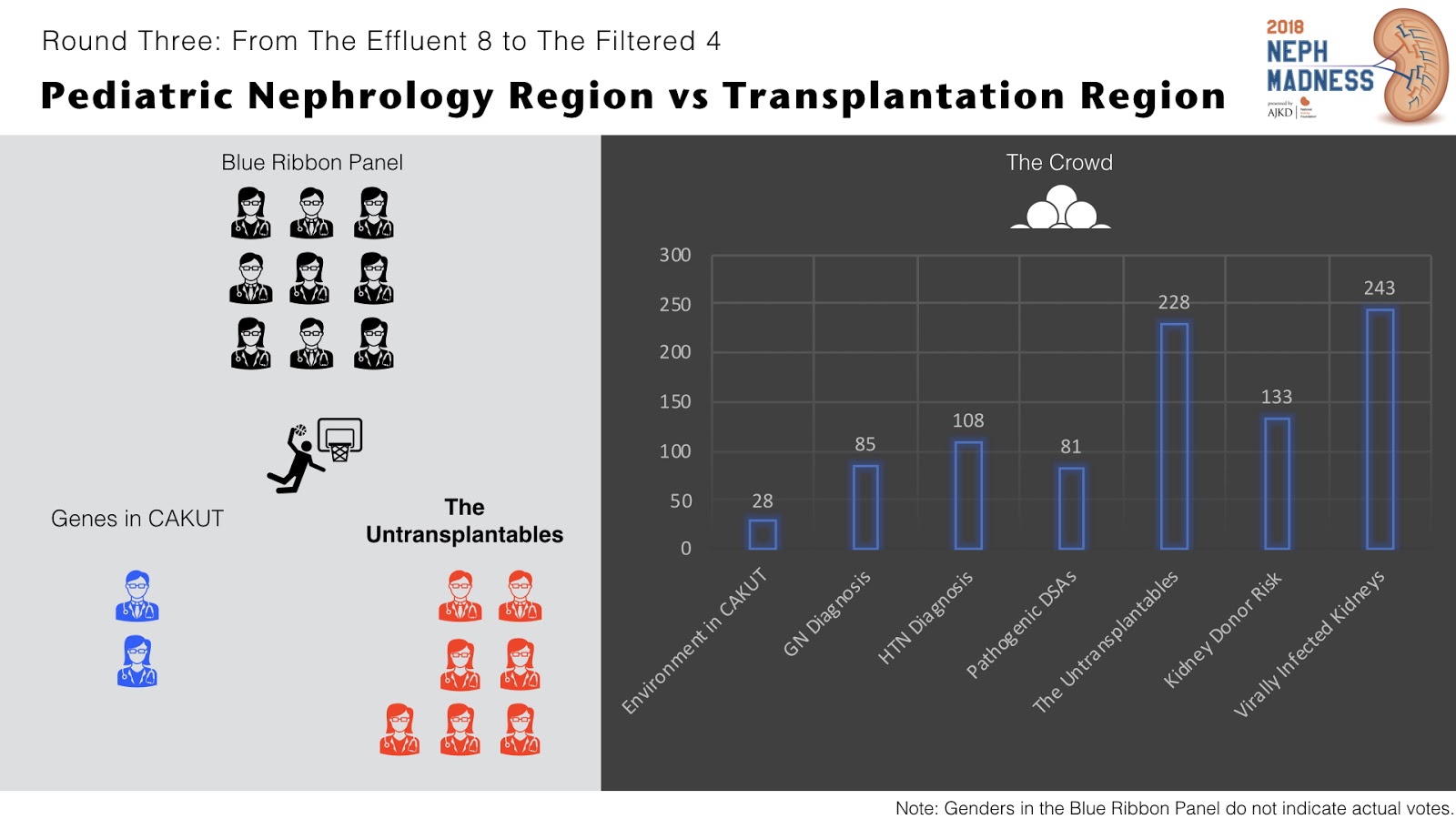 The Untransplantables’ proved they are a significant contender that should not be ignored as they trounced Genes in CAKUT.

The Untransplantables: Such exciting progress.

I fear I may have already used up my best comments in these two sections. In quoting the Statue of Liberty plaque twice, I likened the “Untransplantables” to the immigrants looking for a new life as they arrived in America. Just the term “untransplantable” gives it a sense of being an alien (immigrant), before immigration became such a “threat” to Make America Great Again… In the end, I would argue that nothing else we do as nephrologists comes close to the impact that a kidney transplant does to someone with ESRD. Anything that makes an untransplantable more transplantable is a HUGE deal. The Untransplantables it is.

The Untransplantables: I still don’t like this term but glad to see it has gotten through – hope for patients.

Ladies and Gentleman, your Filtered Four!