Chronic kidney disease (CKD) is a significant public health issue that affects more than 37 million individuals in the United States.  Due to its progressive nature and the increased risk of hospitalizations and kidney replacement therapy (KRT), it exacts a significant economic toll. Hence, lower the CKD-to-kidney failure trajectory is critical for public health policy planning.

Classically, the severity of kidney disease can be classified by estimated glomerular filtration rate (eGFR) and albuminuria (presented as urine albumin-creatinine ratio [UACR]), but more accurate information regarding risk for progression to kidney failure is required to make clinical decisions about testing, treatment, and referral. Models such as GFR slope over time can be useful, but a more accurate predictive model to determine an individual’s risk for progression to kidney failure requiring kidney replacement therapy (KFRT) would be enormously helpful, not only for clinical decision-making, but also for public health interventions.

To date, the best performing prediction models are those of Tangri et al: the 4-variable T4 equation (which includes age, sex, eGFR, and UACR), and the 8-variable T8 equation (which adds serum calcium, phosphate, bicarbonate, and albumin). Because existing risk estimators tend to overestimate the number of patients at risk of progressing to KFRT, there is a continued need for improvement.

A recent AJKD article from Zacharias et al derived, tested, and validated a novel KFRT risk equation based on readily available laboratory parameters. The authors followed a cohort comprised of 4,915 CKD patients enrolled in the German CKD study, which represented all stages of CKD with moderate-to-severe albuminuria. They were then observed for approximately five years while 22 demographic, anthropometric, and laboratory variables were collected and assessed. A least absolute shrinkage and selection operator (LASSO) Cox proportional hazards models was used to develop individual KFRT risk scores. To test for external validation, the results were compared with the Chronic Kidney Disease–Renal Epidemiology and Information Network (CKD-REIN) study, the Salford Kidney Study (SKS), and the Mild to Moderate Kidney Disease (MMKD) study.

Box 1 from Ix and Shlipak, AJKD © The National Kidney Foundation

The authors were able to come up with a new risk prediction score which they called the Z6 model (based on serum creatinine, albumin, cystatin C, urea, hemoglobin, and UACR). Increasing values of creatinine, cystatin C, urea, and UACR increased the estimated risk of KFRT, whereas increasing values of hemoglobin and serum albumin decreased the risk. Corresponding coefficients for standardized variables revealed that serum creatinine (+0.497), serum cystatin C (+0.474), and UACR (+0.422) exerted the strongest effects on risk.  Both the newly developed Z6 and the T4 risk equation compared well with high specific C statistics in all three independent CKD validation cohorts.

The study is limited by the small number of KFRT events noted in patients with eGFR >/= 45, which could diminish the applicability of the Z6 risk equations to patients with CKD Stage G3-G5. A short mean follow-up time of 3.71 years also limits the possibility of more events that would have been noted in the CKD G1-G2 population. Furthermore, the generalizability of the study is limited by the race of the population under study (only White European patients were included).

Despite this, the study was able to generate a new risk equation using six readily available laboratory parameters which correlated well with the external cohort group. There is always room for improvement, particularly in diversifying the cohort population in terms of CKD stage and race, and also lengthening the follow-up period. Hopefully, with the use of equations like this, we can identify patients who would benefit from closer follow-up and early treatment strategies to curb progression into kidney failure requiring KRT. 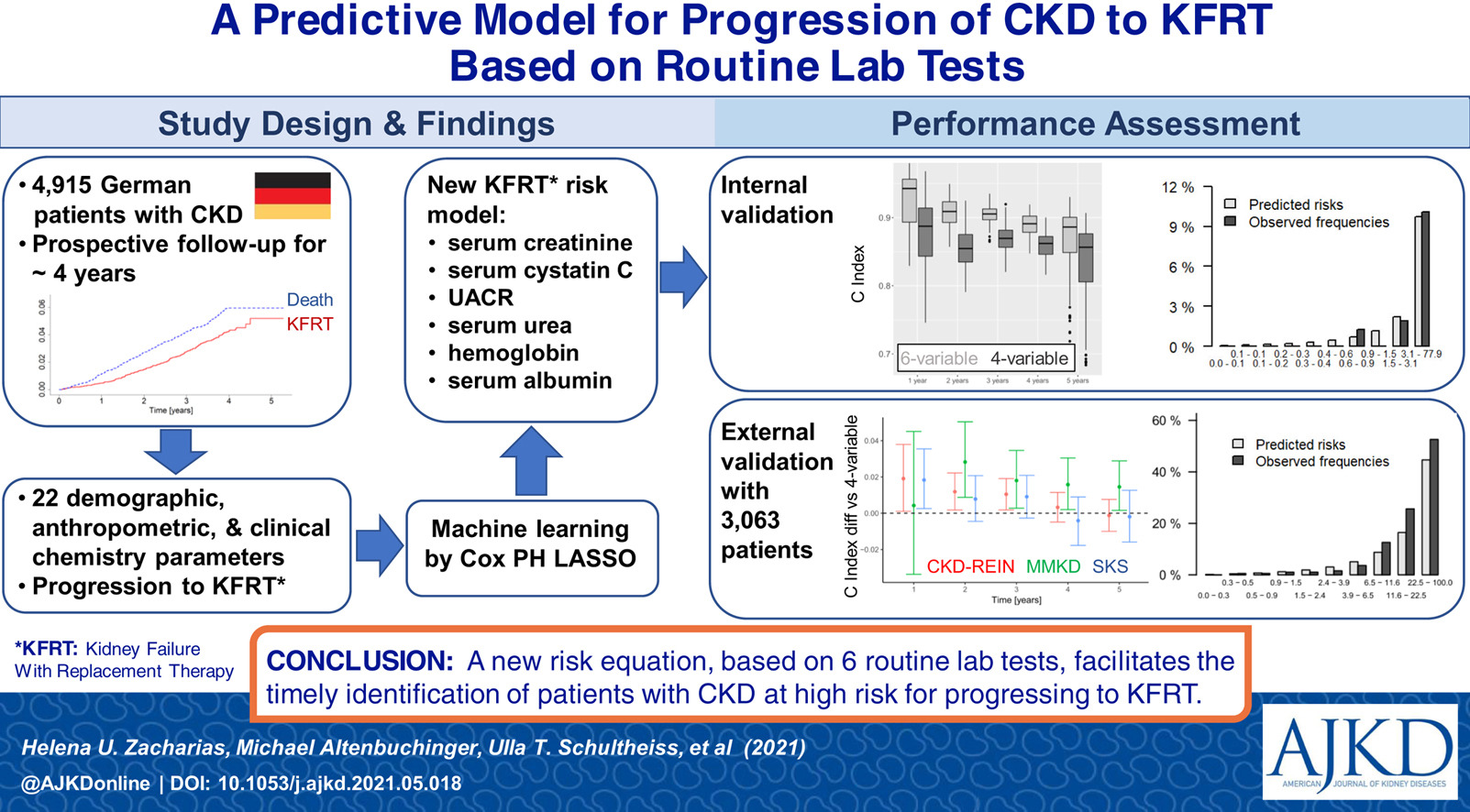