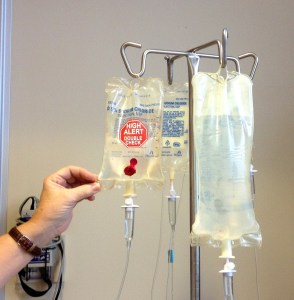 In a recent Perspective published in AJKD, Helbert Rondon-Berrios and Richard H. Sterns explore the historical origins of hypertonic saline use for hyponatremia, recent developments, and questions regarding its use.  AJKDBlog’s Interviews Editor, Timothy Yau @Maximal_Change sat down with Drs. Rondon-Berrios @NephroMD and Sterns to discuss these topics.

AJKDBlog: As you discuss in the intro, even now there are many unanswered questions regarding hypertonic saline – when and how to use it, at what rate, and for how long.  Can you give a brief history on how it was used initially, the early descriptions of osmotic demyelination, and how we came to our current standards of using it to raise the SNa by 4-6 mEq/L to improve neurologic symptoms?

In 1938, Dr. Helwig was confronted with a 64-year-old woman who looked like she was about to die. After routine hysterectomy 36 hours earlier, she had been given 8 liters of water by proctoclysis (a common practice at the time).  She had a seizure and became comatose with cyanosis, opisthotonos, Cheynes Stokes respirations, and bilateral Babinski signs.  Dr. Helwig knew his patient’s moribund state was caused by acute water intoxication; three years earlier he had reported the first case of fatal post-operative cerebral edema. He also knew that animals with experimental water intoxication could be cured with hypertonic saline. He gave his patient a 130 ml bolus of 5% saline (equivalent to 217 ml of 3% saline).  Her symptoms gradually resolved and she was discharged from the hospital without sequelae.

For many years, a brief, rapid infusion of a small volume of hypertonic saline, as first described by Helwig, was standard treatment for what later came to be known as “acute symptomatic hyponatremia”.  The 1950 edition of Harrison’s Textbook of Medicine recommended 100 to 300 ml of 3% saline for rare patients with severe symptoms of water intoxication, enough to raise serum sodium concentration (SNa) by 2 to 6 mEq/L.

Years later, clinical practice began to stray from Helwig’s regimen.  Therapeutic goals shifted to rapid attainment of a SNa believed “safe”, somewhere between 120 and 130 mEq/L. In 1981, Arieff, a nephrologist and leading authority in the field, co-authored a paper reporting five patients with profound thiazide-induced hyponatremia (SNa ranging from 98 to 106 mEq/L) with fatal or crippling neurological complications that he blamed on prolonged brain swelling from untreated hyponatremia. A controversy ensued when Laureno, a Neurologist, wrote a letter to the editor noting these patients had been treated with hypertonic saline (indeed their SNa had all been raised by ³25 mEq/L within 48 hours); he attributed neurological sequelae to central pontine myelinolysis, a disorder recently linked to rapid correction of hyponatremia. Arieff’s reply firmly rejected Laureno’s hypothesis, and, the next year, evidence appeared supporting Arieff’s position.

Ayus and colleagues reported favorable outcomes in seven patients with extremely severe hyponatremia (99.7±3.0 mEq/liter) corrected to mildly hyponatremic levels (128.3±1.6 mEq/liter) at 2.4±0.5 mEq/liter/hr, in response to infusion of 1374±86 ml of 3% saline (over five times the dose used by Helwig). A subsequent literature review by Ayus and Arieff asserted that correction of hyponatremia by 2 mEq/L/hr until a level of 130 mEq/L was reached led to much higher survival rates than ”slow” correction (<0.7 mEq/L/hr).   By the 1980’s, most nephrologists embraced the Ayus protocol.  A 1986 NEJM editorial concluded as follows:

“Most experts currently believe that an increase of 2 mmol per liter per hour in the serum sodium concentration to a level of 120 to 130 mmol per liter is not excessive in symptomatic patients with hyponatremia”.

Ayus and colleagues offered further support for the editorial’s conclusion in an uncontrolled prospective study demonstrating favorable outcomes in 33 hyponatremic patients corrected with 5% saline increasing SNa from 108±1 mEq/L to 126±1 mEq/L at 1.3±0.2 mEq/L/hr.

Because brain adaptations to hypotonicity take about 48 hours, it was postulated that tolerance of rapid correction depends on the duration of hyponatremia. Many patients included in Ayus’s case series had been hyponatremic for less than 48 hours.  In 1986, post-therapeutic neurological sequelae (dubbed the “osmotic demyelination syndrome” or ODS) were described in more chronically hyponatremic patients corrected by >12 mEq/L in a single day. The next year, a single-center case series did not identify ODS in patients with acute water intoxication; in chronic hyponatremia, the likelihood of this complication increased with more rapid correction. These findings were corroborated in a multicenter series that expanded the definition of rapid correction to >12 mEq/L in 24 hours and/or >18 mEq/L in 48 hours. Over the next few years, more cases of ODS appeared in the literature, some after correction by only 9 to 10 mEq/L in 24 hours.

Expert opinion slowly began to shift soon after. In 2000, an invited NEJM review cited more than 2000 times concluded that small increases in SNa, on the order of 5%, or 3 to 7 mEq/L, were sufficient to reduce symptoms and stop seizures.  In normonatremic neurosurgical patients, administration of enough hypertonic saline to increase SNa by 4 to 6 mEq/L markedly reduced intracranial pressure and reversed impending herniation. Subsequently, guidelines published by panels of experts in the United States and Europe made similar recommendations. Both adopted minor modifications of Helwig’s original treatment for severe hyponatremic symptoms –100 or 150 ml bolus infusions of 3% saline, repeated if necessary–aiming at a 4 to 6 mEq/L increase in SNa.   Without fully abandoning rapid attainment of a “safe” SNa as the eventual goal, Ayus and co-workers also recommended small volume bolus infusions for relief of symptoms, dubbing this a “novel treatment”. 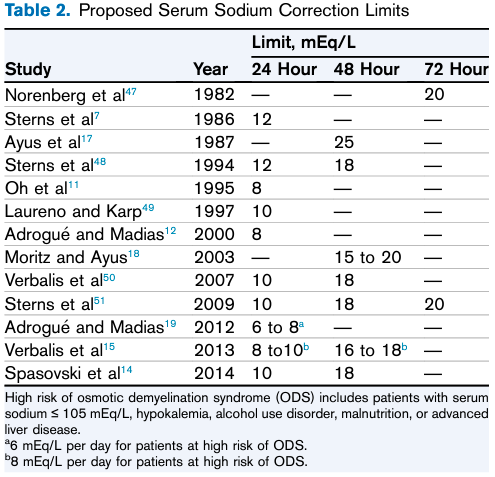 AJKDBlog:  Thank you for the fascinating historical evolution of this electrolyte disorder.  One common misconception is that 3% NaCl must be administered via a central line to prevent peripheral vein irritation.  Can you tell us where this originated from, and the actual rates of phlebitis when hypertonic saline is administered peripherally?

This misconception originated from a 1979 study comparing peripheral venous infusions of amino acids for parenteral nutrition to nonnitrogen solutions (e.g., 5% dextrose in 0.9% saline). Amino acid solutions with osmolarity  >600 mOsm/L infused for 35.2±19.9 hours had twice the risk for phlebitis associated with nonnitrogen solutions.   These findings were conflated to apply to 3% saline (osmolarity 1027 mOsm/L) which was not studied. In comparison, the administration of other hypertonic fluids via peripheral vein such as mannitol 20% (osmolarity 1192 mOsm/L) or sodium bicarbonate 8.4% (osmolarity 2000 mOsm/L) is a common practice. The actual rates of phlebitis with hypertonic saline administration are in the order of 0-10% (mean of 6-7%) which are comparable to the rates associated with the administration of normal saline and other intravenous crystalloids.

AJKDBlog:  Using DDAVP in hyponatremia is incredibly counterintuitive (I don’t even bother bringing it up when I teach medical students because it tends to make them misunderstand the basic principles).  However, can you explain to the readers the role of desmopresin in preventing overcorrection of severe chronic hyponatremia?

In 1976, Tomlinson suggested that treatment of chronic hyponatremia might be the cause of central pontine myelinolysis. He reported two women with profound, diuretic-induced hyponatremia (serum sodium level, 96 and 100 mmol/L) but with modest symptoms, who deteriorated neurologically after their serum sodium concentration had been increased by 25 and 32 mmol/L over 48 hours.

10 years later, the term ODS was introduced to describe neurological complications of excessive therapy in a series of patients with severe hyponatremia.  Seven of the eight patients described in this series had hyponatremia and hypokalemia due the thiazides.  An accompanying literature review showed that most reported patients with serum sodium concentrations ≤ 105 mEq/L who had deteriorated neurologically after correction by >12 mEq/L per day, also had thiazide-induced hyponatremia.

It was thus well understood that for many patients, excessive correction of hyponatremia was caused in part by a spontaneous water diuresis that developed in response to volume repletion and discontinuation of medications.  Likewise, it was understood that to avoid excessive correction, replacement of urinary water losses would be required.  A 1990 review addressed this problem and theorized that in some cases administration of the synthetic antidiuretic hormone, desmopressin, might be required.  Because 5 of the patients described in the 1986 paper on ODS had been treated at Rochester General Hospital, nephrologists at that hospital became attuned to taking special care to avoid excessive correction of hyponatremia.  Disturbingly, when the group reviewed their track record with the use of hypertonic saline, several cases were found in which overcorrection occurred despite attempts to match urine water losses with D5W.  This experience led to an increased use of desmopressin in a reactive mode; even then, a few patients had already overcorrected by the time that desmopressin was administered.

One of those patients reappeared with a recurrent episode of profound diuretic-induced hyponatremia – a serum sodium of 97 mEq/L complicated by seizures.  As the patient was at high risk of developing ODS due to ethanol abuse and could be expected from previous experience to eventually develop a water diuresis, It was decided to administer desmopressin to this patient prophylactically at the very onset.  Desmopressin was continued at 6-hour intervals to create a state of iatrogenic SIADH, and the serum sodium concentration was increased with hypertonic saline, administered with an initial bolus, followed later by a slow infusion, titrated to achieve correction by 6 mEq/L/day.

The successful outcome in a high-risk patient with “double-digit” hyponatremia convinced the Nephrology group at Rochester General to adopt this strategy routinely.  A review of the group’s track record showed that proactive use of desmopressin combined with hypertonic saline was much more successful (and less labor-intensive) than previous efforts to match urinary water losses or to stop them with reactive administration of desmopressin.

AJKDBlog:  Although not mentioned in this paper, there has also been some data on using amps of sodium bicarbonate (8.4% NaHCO3 in 50 ml), which contains 50 mEq of sodium, comparable to 100 ml of 3% NaCl.  What are your thoughts on using this for severe symptomatic hyponatremia?  Does it differ at all from using 3% NaCl and why?

AJKDBlog: Last question – when calculating a continuous infusion of 3% NaCl, nephrologists often will use the Adrogue-Madias equation, but as you mention, this does not account for ongoing urinary losses.  Obviously, nothing replaces frequent monitoring of the patient’s serum sodium, but are there calculations that you find useful when administering hypertonic saline?

Yes, we frequently use a simple weight-based calculation to estimate initial rates of hypertonic saline 3% infusion. Based on the Edelman equation, it is estimated that a volume of hypertonic saline 3% equivalent to 1.0-1.5 ml/kg of body weight will increase the SNa by approximately 1 mEq/L. This volume can be administered over 6 hours (e.g., for an 80-kg person, the volume to be administered would be 80 x 1.5 = 120 ml, and the rate of administration would be 120/6 = 20 ml/hr). This increase in SNa by 1 mEq/L every 6 hr will result in a 24-hr correction of at least 4 mEq/L which is within our goal of 4-6 mEq/L/day.