Dr. Carl Walther is a nephrologist and clinical researcher at Baylor College of Medicine in Houston. His research focuses on kidney health in LVAD recipients, and he is interested in all aspects of kidney-cardiovascular interplay.

Caring for people hospitalized with acute decompensated heart failure (ADHF) is bread and butter internal medicine (and nephrology and cardiology). But as with much bread and butter medical practice, there is limited evidence to guide it, and clinical judgment plays a major role. Decongestion by volume removal—usually with diuretics, occasionally with ultrafiltration—is crucial to helping these people feel better in the short term, get home, and stay home. It’s widely recognized that adequate decongestion prior to leaving the hospital is important, and it is increasingly recognized that serum creatinine and blood urea nitrogen (BUN) changes with volume removal, while perhaps providing some prognostic information, are of limited value in guiding management in this situation (except in the severe cases where very high values suggest kidney failure and the possible need for kidney replacement therapy in the short term).

Since I was an intern I have always enjoyed diuresing people hospitalized with ADHF. Maybe it is just me, but I think watching a skilled internist adjust the diuretic dosage to get several liters of urine output in a 24 hour period while putting a smile on a patient’s face as they can finally catch their breath and get some rest (while preemptively replacing the potassium losses so the serum potassium never leaves the sweet spot) is like watching a concert pianist. As a nephrologist, I am now generally involved only when the kidney function is low or worsening, but the principles, I believe, are the same; decongest, and do it fast, because I can’t think of a more patient-centered outcome than breathing comfortably and sleeping in a comfortable position. Sure, the creatinine might increase, the BUN might increase, but what’s the alternative? Leave a patient volume-overloaded so some numbers looks better? Getting them euvolemic by any means necessary, including ultrafiltration or inotropes if needed, is the general thinking nowadays. How fast? There’s no definitive evidence-based answer, but for the past 10 years I’ve gone by the CARRESS-HF trial’s diuretic arm protocol (for elegance, simplicity, and effectiveness, it can’t be beat): Three to five liters of urine per day until they are decongested. If the goal isn’t met, make a change. (And I like that Dr. Braunwald’s name, among many, is on the protocol; forgive me a little hero worship for a member of the internal medicine pantheon). Numerous observational studies, many sharing some authorship with the article about to be discussed, support this decongestion-centric approach as it relates to the kidneys.

In a recent AJKD article, Wendy McCallum and colleagues have investigated how the rapidity of decongestion in persons hospitalized with ADHF is associated with decreased kidney function over the following months. As they point out in the introduction, some people may worry about overly rapid decongestion out of concern for intravascular volume depletion and kidney injury. These are of course valid concerns, but readily avoided with good volume exams and close monitoring, and if you set an upper goal of 5L of volume removal per 24 hours, certainly well below any concerns about plasma refill limits. This study analyzed data from the EVEREST trial, which studied the use of the vasopressin antagonist tolvaptan in persons with heart failure with reduced ejection fraction (HFrEF) hospitalized with ADHF. EVEREST, which ran from 2003-2006 and was published in 2007, enrolled people with HFrEF (left ventricular ejection fraction <=40%) and New York Heart Association (NYHA) Class III/IV symptoms, who were hospitalized for ADHF. Participants were randomized to tolvaptan 30mg/day or placebo; the remainder of care (ie, rates of diuresis, etc) was left to the discretion of the physicians caring for the patients, yielding some presumed clinical variability to exploit in the present analysis.

Several markers of congestion change were used to assess rapidity of in-hospital decongestion: changes in natriuretic peptide levels, a clinical congestion score, and hemoconcentration measures (hematocrit, albumin, total protein). The outcomes were worsening kidney function, defined as a decline in eGFR to below <30 ml/min/1.73m2 or a decline in eGFR by 40%, and these were assessed over a median 10-month follow-up.

The upshot is that more rapid decrease in congestion measures in-hospital was associated with better kidney outcomes, before and after adjustment for covariates. Similar results were found in a variety of sensitivity analyses. To me, the hemoconcentration results are the most compelling. Figure 1B, showing pretty linear relationships between each hemoconcentration change measure and lower risk of incident kidney disease, is nice to see. The change in natriuretic peptide and congestion results are similar, if less linear, but these measures seem a bit more removed from what clinicians have control over—the rate of volume removal—and a bit more dependent on things we don’t have control over, like baseline kidney and heart health and the severity of the ADHF event. 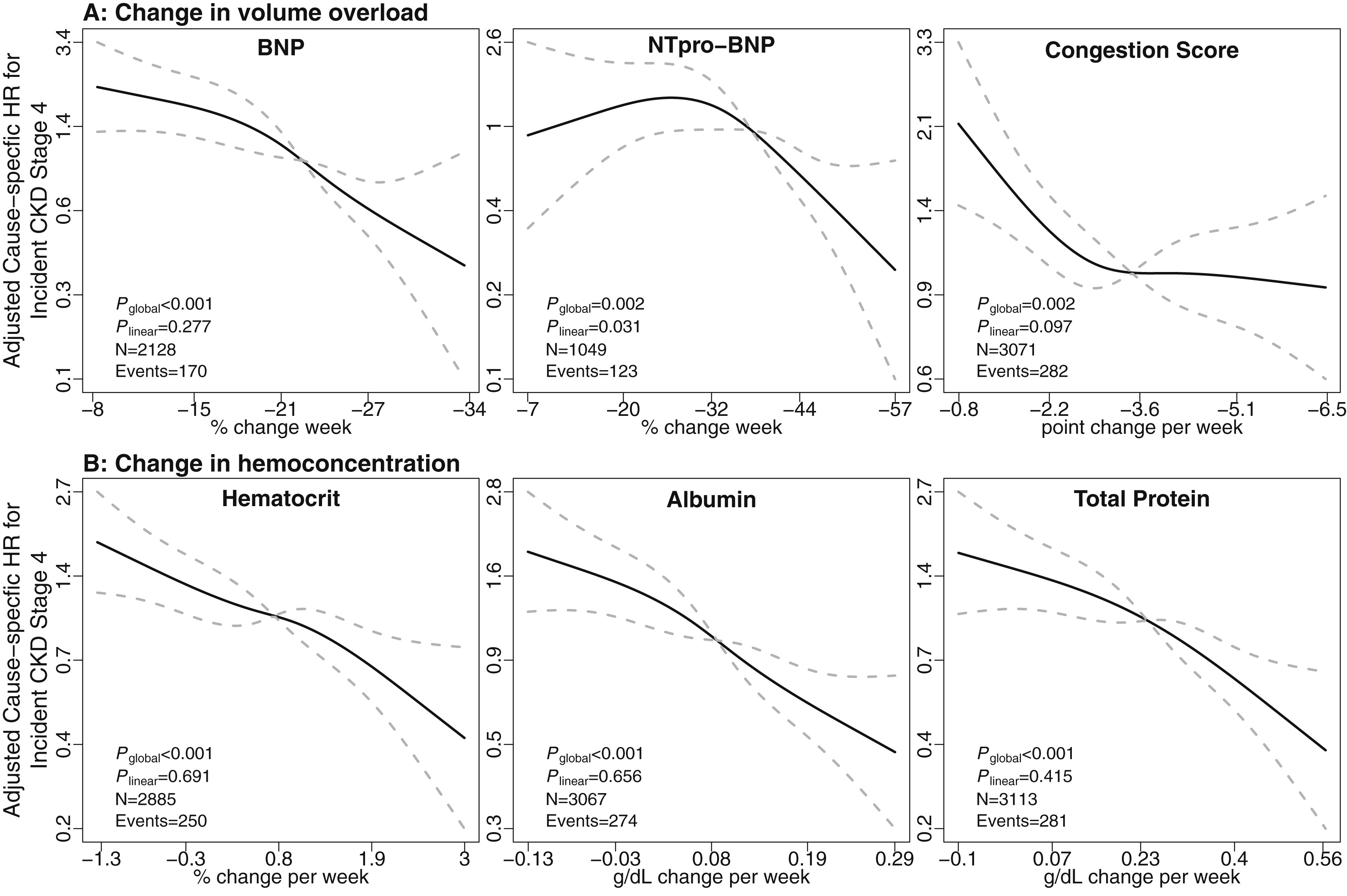 Fig 1 from McCallum et al, AJKD © National Kidney Foundation, showing the association between change in (A) markers of volume overload and (B) markers of hemoconcentration with risk of incident CKD G4-G5.

As with most observational studies, of course, it is not clear how or whether this study should impact management, but at least for me it tends to support prior beliefs and practices mentioned above and widely advocated by many. Does this study directly support the notion that higher diuretic doses are better, or help us choose a rate of volume removal? Well, it is not clear whether more rapid decongestion was due to higher diuretic doses or to better underlying kidney and heart health, which more rapidly tipped back to an improved equilibrium with a little TLC (tender loving care) and loop diuretic in the hospital. Certainly, the authors did an admirable job of adjusting for potential confounding covariates, but as they point out, and per the usual refrain, residual confounding could explain the finding. From Table 1 there is a hint that rates of change in congestion were driven so strongly by widely varying participant factors (for example, those with most rapid decongestion were more hypertensive at presentation, had better kidney function, and had markedly lower BNP at presentation), that despite covariate adjustments, any differences in management (for which variance is unclear) may have had little or no effect. Nevertheless, it joins a large body of circumstantial evidence supporting a decongestion-centric approach to managing ADHF as safe for the kidneys. And the really good news nowadays, of course, are the growing number of effective therapies to prevent hospitalizations for ADHF. Here’s to someday saying goodbye to ADHF admissions and IV loop diuretics.