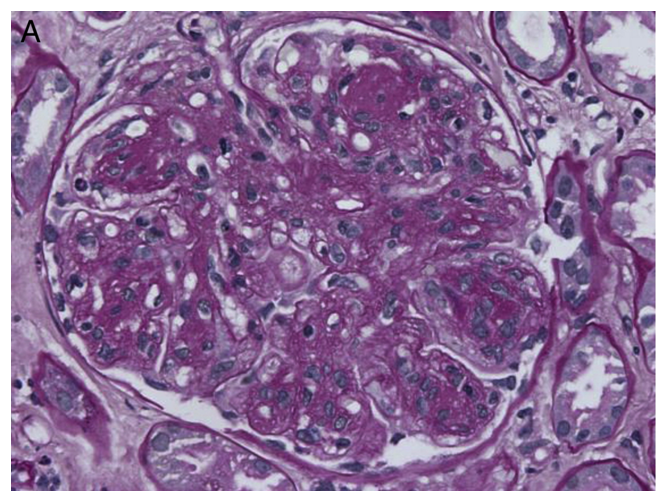 Bortezomib is a proteasome inhibitor initially licensed for use in patients with refractory multiple myeloma. More recently, therapeutic regimens consisting of bortezomib combined with prednisone and melphalan have also been developed as primary treatment for amyloidosis and myeloma. The rationale for proteasome inhibition is disruption of proteolysis that leads to accumulation of toxic proteins and activate apoptotic pathways in rapidly proliferating cells.

Besides multiple myeloma, suppression of plasma cell antibody production has potential applications in a number of other kidney diseases. Accordingly, literature has appeared demonstrating utility of bortezomib in treatment of AL amyloidosis, membranous nephropathy secondary to antibodies directed against M-type phospholipase A2-receptor, antibody-mediated rejection in kidney transplant recipients, and immune thrombocytopenic purpura. In a case recently published in AJKD, Patel et al describe the therapeutic efficacy of bortezomib in heavy chain disease. They describe 3 patients with a sustained reduction in proteinuria and improvement in kidney function after several cycles of intravenous of bortezomib. Unfortunately, all subjects developed peripheral neuropathy, which had to be managed by dose reduction. Future research should be directed at developing orally active proteasome inhibitors with less toxicity. It is likely that bortezomib would also be effective in other immunoproliferative disorders of the kidney including light chain disease, Waldenstrom macroglobulinemia, monoclonal light chain associated crystalline tubulopathy, and plasma cell rich B-cell lymphomas.

Borrowing from the oncology literature is critical for nephrology. The advances of therapeutic agents in hematology and oncology have progressed faster than in nephrology. Certain agents may fill potential niches in diseases of the kidney. Rituximab is an example of such an agent; and now bortezemib is defining a role. As monoclonal agents are being developed for malignancies, our job is to also explore their potential in kidney diseases.