During NephMadness 2017, the newcomer ‘SGLT2 inhibitors’ team for the Diabetic Nephropathy region surprised the competition and made it all the way to the Filtered Four where it was knocked out by the eventual winner Genes in ESKD Disparity. In order to celebrate the success of this team, AJKD commissioned a Narrative Review from Dr. Katherine Tuttle, who wrote an excellent blog editorial on why she thought it was the year of the GLP-1 receptor agonists (which were ultimately knocked out in the first round by SGLT2 inhibitors). In the article, Dr. Tuttle and her coauthors provide an overview of the current evidence with SGLT2 inhibitors in Diabetic Kidney Disease (DKD). 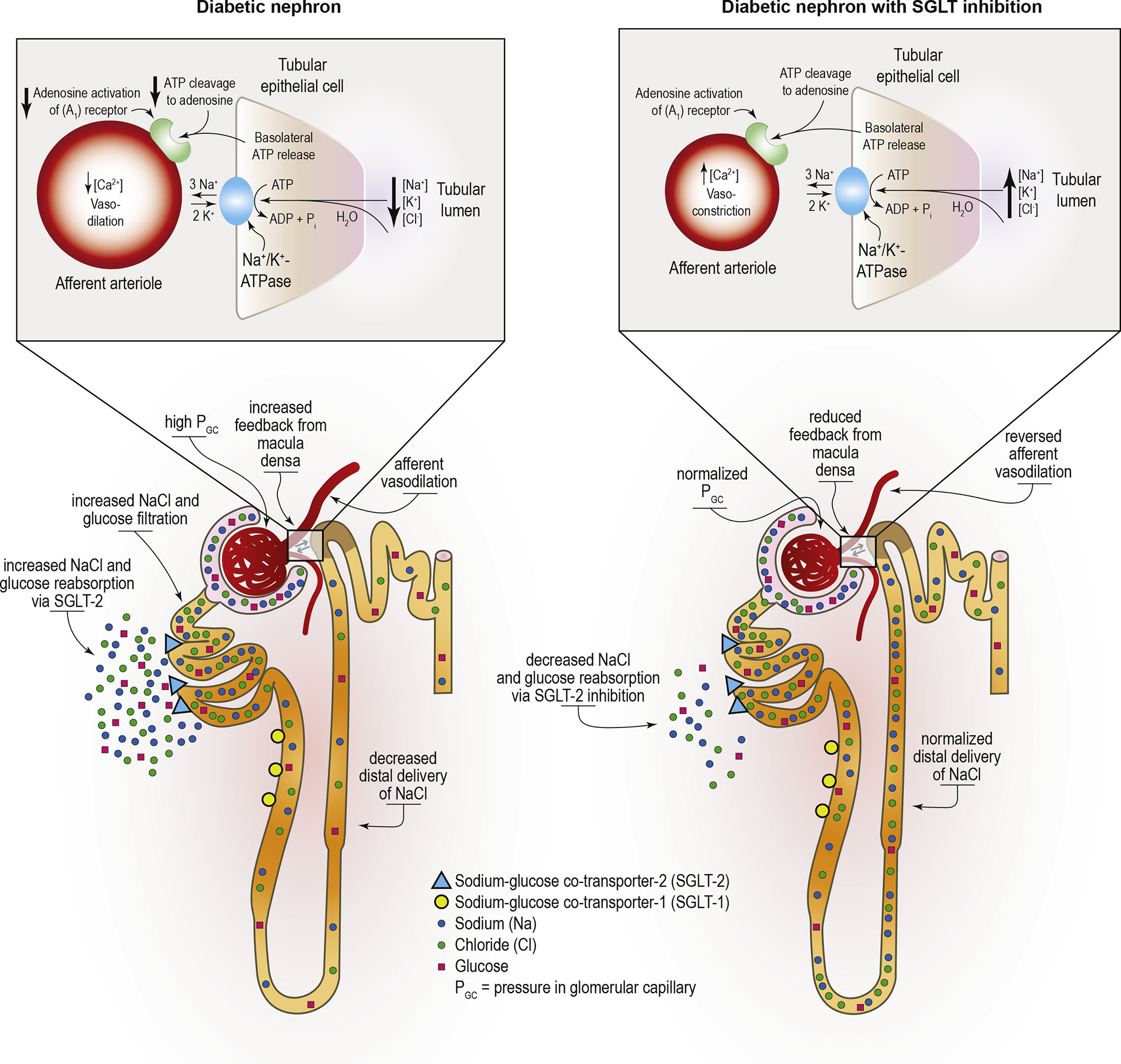 Effects of diabetes and SGLT2 inhibition on nephron hemodynamics. In the diabetic nephron, overexpression and compensatory upregulation of the activity of SGLT2 glucose and sodium reabsorption in the proximal convoluted tubule results in decreased delivery of solutes to the macula densa. The resulting reduction in solute and water transport into the tubular epithelial cells reduces adenosine triphosphate (ATP) release from the basolateral membrane of tubular epithelial cells, which in turn reduces adenosine production and activation of the A1 receptor expressed in the afferent arteriole with a net effect of vasodilation. In the diabetic nephron with SGLT inhibition, lessening SGLT2-driven sodium-coupled glucose transport in the proximal convoluted tubule normalizes solute delivery to the macula densa, increasing solute and water reabsorption and increasing basolateral release of ATP from the tubular epithelium. The resulting increase in adenosine activation of the A1 adenosine receptor reverses afferent arteriole vasodilation associated with diabetic kidney disease. Figure 2 from Alicic et al, AJKD © National Kidney Foundation.

The authors nicely summarize the clinical trial data that are currently available in Table 1 below. There are at least 3 ongoing phase III studies that will further inform us on the potential use of SGLT2 in DKD. Importantly, two of these studies have primary kidney outcomes. To date, we only have secondary outcome data available from the CANVAS trials and EMPA-REG, neither of which were powered to detect superiority in the kidney outcomes and thus should be considered hypothesis-generating. Secondary outcomes in EMPA-REG Outcome showed a reduction in doubling of serum creatinine, progression to macroalbuminuria, and initiation of kidney replacement therapy. Similarly, the CANVAS trials showed a decrease in progression of albuminuria and the composite kidney outcome of 40% reduction in GFR, kidney replacement therapy, and kidney death. Confounding both EMPA-REG and the CANVAS studies is a lower blood pressure in the active treatment arm. 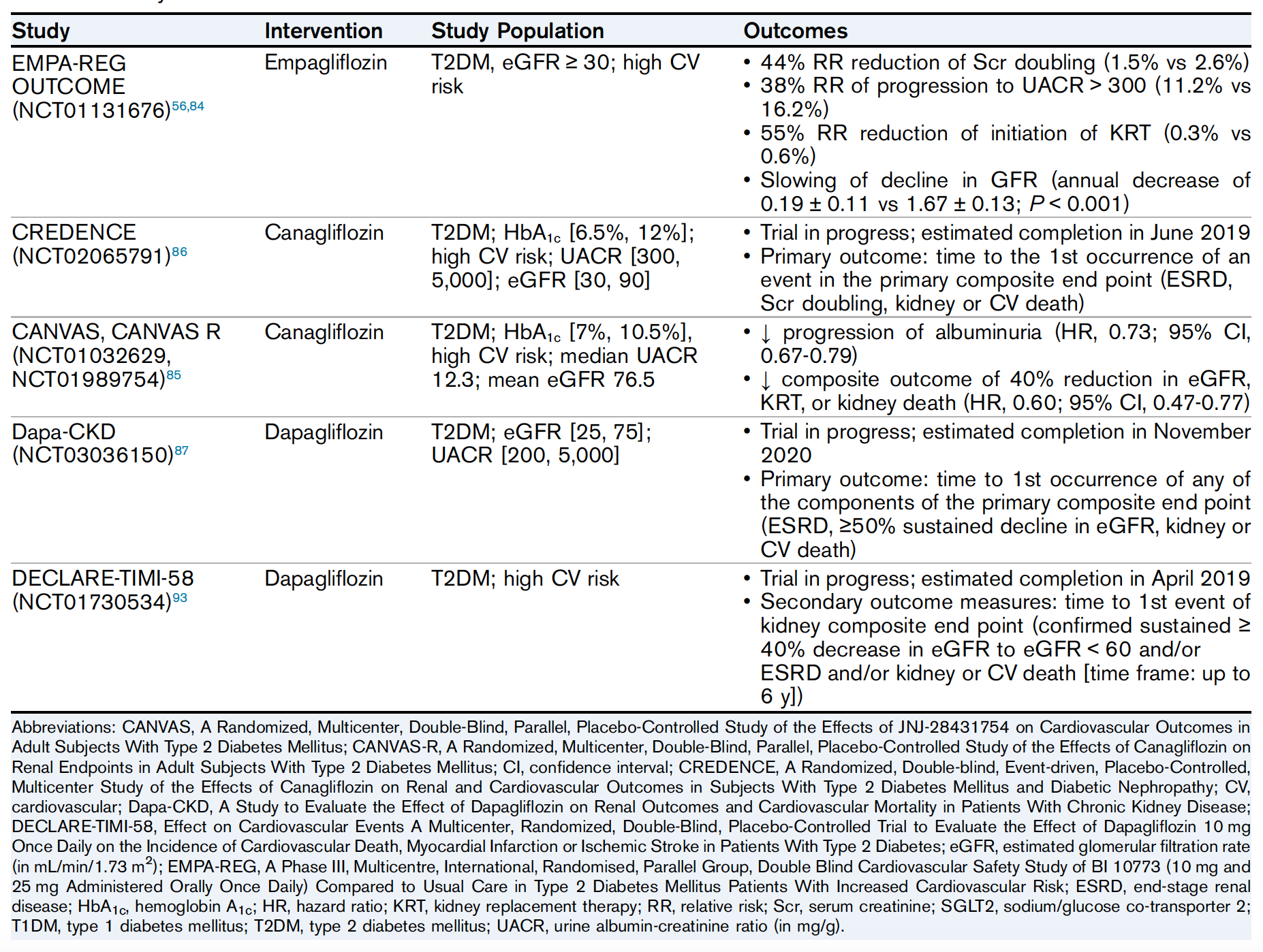 It is clear that we need new methods to treat DKD. It has been over 3 decades since it was discovered that inhibition of the renin angiotensin system slows the progression of kidney failure. This was an important discovery, and yet diabetes remains the most common cause of end stage kidney disease. As nicely summarized in this article, SGLT2 inhibitors are emerging as a promising candidate to prevent and slow the progression of DKD. For now, though, we will have to wait with bated breath for the ongoing clinical trial results.